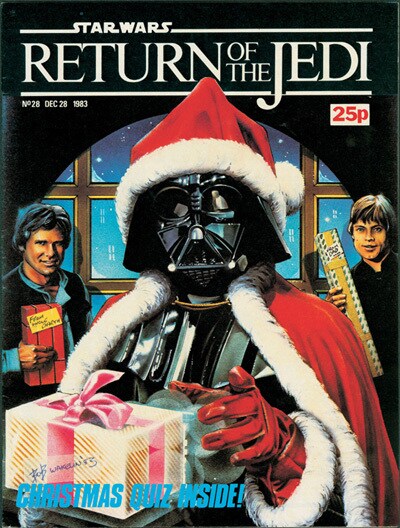 If you take a moment to think about it, Star Wars and Christmas make very strange bedfellows, as this 1983 U.K. comic cover shows. There’s nothing in the movies themselves that comes close to a festive holiday except for the spontaneous galaxy-wide victory celebration at the end of Episode VI. The infamous 1978 Star Wars Holiday Special and its depiction of Life Day is nothing more than a botched attempt to create a Christmas simulacrum.

Now I may have missed them, but I don’t recall seeing sets of Mr. Spock and Captain Kirk holiday lights. Dr. Who tree toppers are probably stored away on the Tardis. And while there may be festive nutcrackers of Planet of the Apes' Cornelius and Dr. Zaius, I’ve never seen them.

So why Star Wars and Christmas? It’s just one more indication that Star Wars quickly became an all-encompassing, once-in-a-generation phenomenon -- that kind of singular sensation that can’t be created by publicity, advertising, or marketing muscle. And as a long-lived, multi-generational phenomenon, we’ll still have Star Wars when Honey Boo Boo is in her 40s and people will be asking “Honey who?”

The Star Wars Christmas tradition probably started with the 1978 Lucasfilm holiday card, which was a version of the brilliant John Alvin “Concert” poster with R2-D2 and C-3PO as a two-droid band. Then the great concept artist Ralph McQuarrie started painting special Lucasfilm Star Wars holiday-themed cards, which years later were turned into action figure sets by Hasbro. There was the Santa-PO and R2-REeindeer before the Yule log. 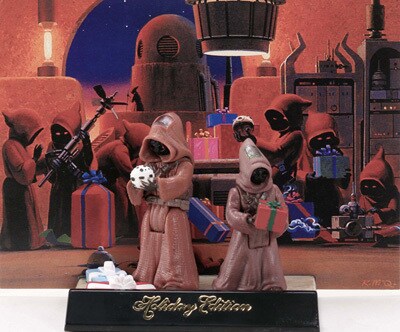 And we had the Jawas exchanging gifts on Tatooine. 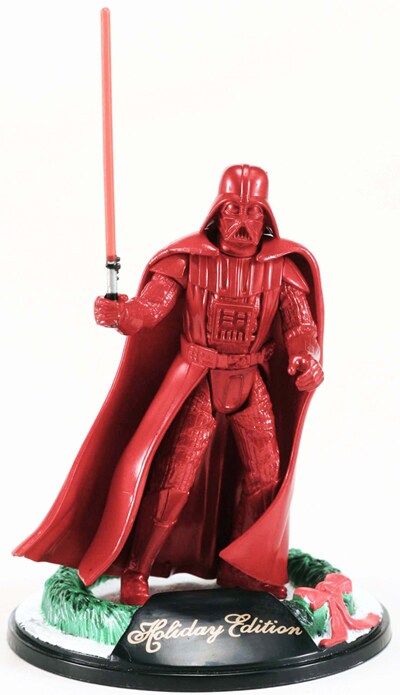 But then the company veered in a different direction, and a shiny red Vader atop a Christmas wreath turned off so many fans that it became the last holiday figure produced. 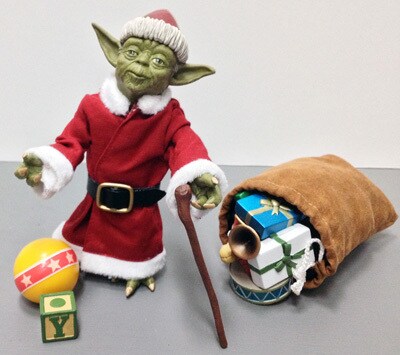 Poor Yoda has probably fared the worst among Star Wars characters. He can look great, such as in this small figurine from Sideshow Collectibles. 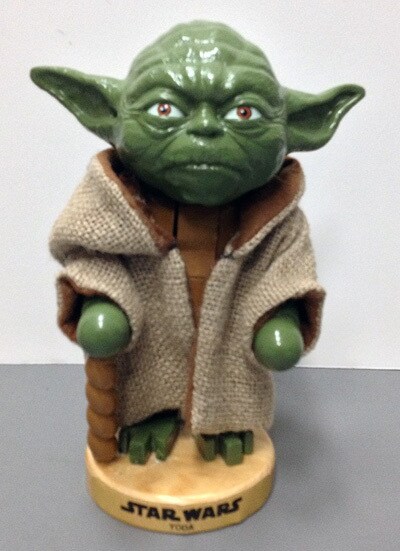 But he doesn’t quite make it as a small nutcracker. And he’s downright scary on this stocking -- something that you’d obviously fill only with lumps of coal. In fact, all Star Wars nutcrackers seem hard to pull off. The most well-known company in the business, Steinbach, did manage a pretty cool limited edition Darth Vader. 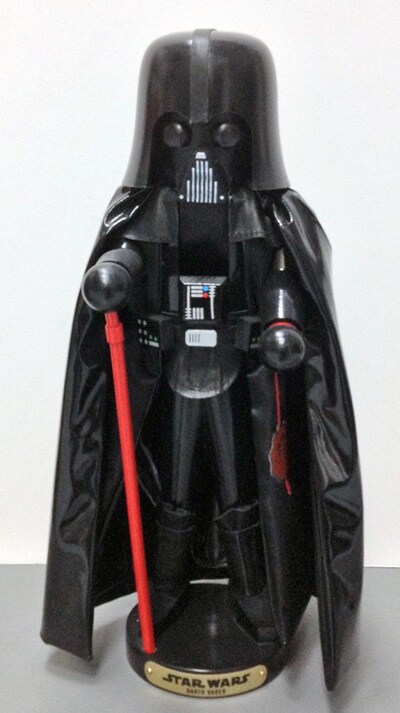 After it sold out, they had to come up with a second variation. I think their designer watched Spaceballs instead of Star Wars, because this looks a lot more like Dark Helmet to me. It’s hard to write about Christmas without mentioning that seminal recording, “Christmas in the Stars.” Call me nuts, but I really do like it and even wrote the liner notes for the first CD release. Back in the day, you could even buy the 45 rpm single for my favorite two songs.

I haven’t mentioned the wonderful Hallmark ornaments…because there’s very little to poke fun at. But I do indeed try to collect them all. The earlier Christopher Radko blown glass ornaments are very cool too.

Even though the Hanukkah market is but a whisker on Santa’s face (and this year’s holiday ended last week), we can do better than one R2-D2 “droidel” downloaded from StarWars.com a couple of years ago. 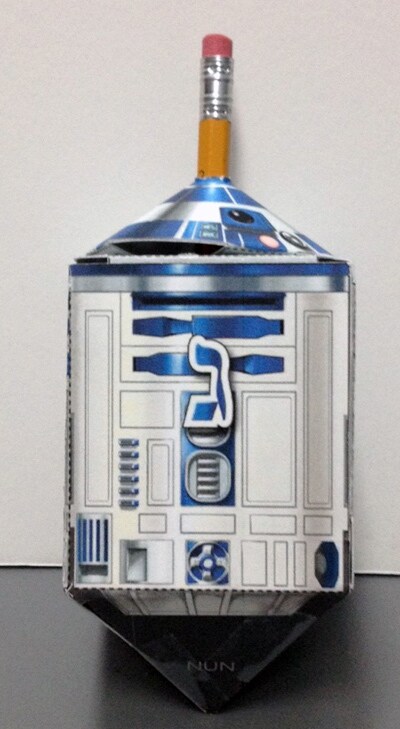 How about a Hanukkah card making some allusion to Imperial “gelt.” And there’s the most obvious product of all: A menorah in which each of the nine candle holders is shaped like a different character from the Mos Eisley cantina. I’ll be the first in line to buy it!

Until then, I guess I’ll just celebrate Life Day, thanks to Star Wars crafter Amy Sjoberg who gave me a gift of Wookiees in the Basket: the entire family of Mala, Chewie, Lumpy and Itchy in their Life Day robes and holding their Life Day orbs! As we say in Shyriiwook, Huwaa muaa mumwa?