Speeder Bike Special: Looking Back at Return of the Jedi Poster Magazine #3

What '80s kid wouldn't want a magazine on speeder bikes, B-wings, and Ewoks? AND had a rancor/Han Solo poster? 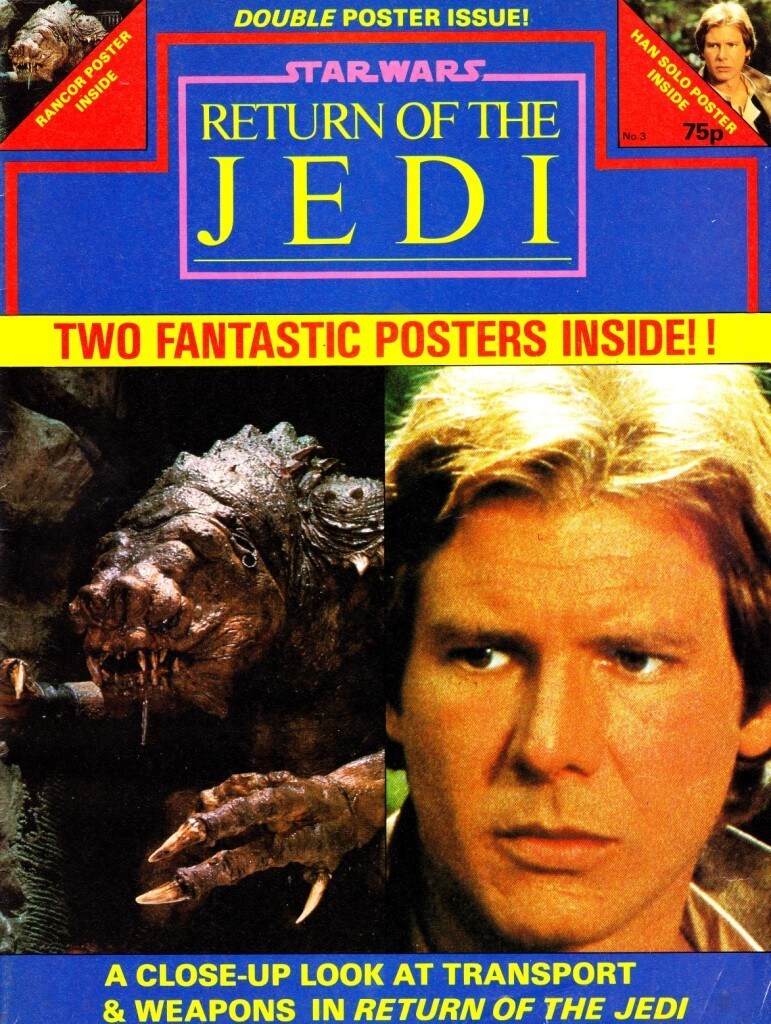 Of the many elements of Return of the Jedi that thrilled the crowds and delighted fans of the saga was the introduction of new and unseen vehicles. While in these current, new-canon days we learn that many of the vehicles introduced in Return of the Jedi had been around for awhile, back then they were welcomed as completely new and original ships. The TIE Interceptor, the B-wing, the A-wing and the Imperial Shuttle were just some of the new vessels on show, expanding upon what we’d seen before. The TIE Interceptor was the uber-TIE fighter, faster and more maneuverable than its predecessor. The B-wing was a heavy bomber in a similar style to the Y-wing but with a fascinating design, while the A-wing was the classic snub fighter.

Issue #3 of the Return of the Jedi poster magazine was fronted with a cover featuring the two stars of its giant poster: the rancor and Han Solo. The interior turned its eyes to the Imperial speeder bike. The speeder bike chase was arguably the most exciting sequence in the entire movie. Kinetic to the verge of inducing motion sickness, the pure adrenaline of the chase (which you will remember had no accompanying music, another on-the-nose decision by John Williams and George Lucas) and the sound of the bikes combined to push us right back in our seats. The natural predecessor to the podrace from The Phantom Menace, this was action at its best, and this issue took an in-depth look at the vehicles. 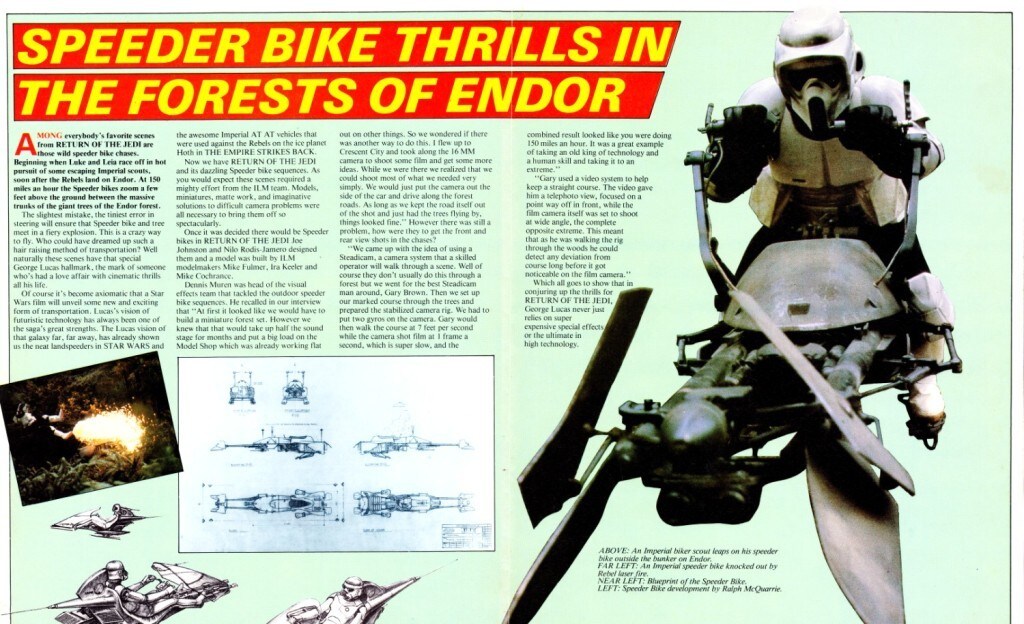 Bringing the speeder bike chase to life required a number of elements and a lot of planning and preparation. Today, hi-tech pre-visualization is used to give the director a skeleton to work from, allowing them to construct rough versions of sequences and layer up and up until the final sequence is complete. Back in 1982 when Jedi was being shot and the effects were being designed, such technology didn’t exist, so SPFX legend Dennis Muren and his team had to improvise. The solution -- a rough model mock-up of the set, a toy action figure on a speeder bike, and a small video camera. That gave director Richard Marquand a good idea of what the sequence would look like, but then came the task of scaling up and up and up to life size and making the forest seem like it was blasting by at hundreds of miles per hour. Muren explained in the issue.

“I flew up to Crescent City and took along the 16mm camera to shoot some film and get some more ideas. While we were there we realised that we could shoot most of what we needed very simply. We would just put the camera out the side of the car and drive along the forest roads.” That took care of the side shots, but what about shots looking at the bike from the front and the behind? “We came up with the idea of using a Steadicam, a camera system that a skilled operator will walk through a scene. [Cameraman Garret Brown] would then walk the course at seven feet per second while the camera shot film at one frame a second, which is super slow, and the combined result looked like you were doing 150 miles an hour.”

And there you have it. A logical solution to creating movie magic. 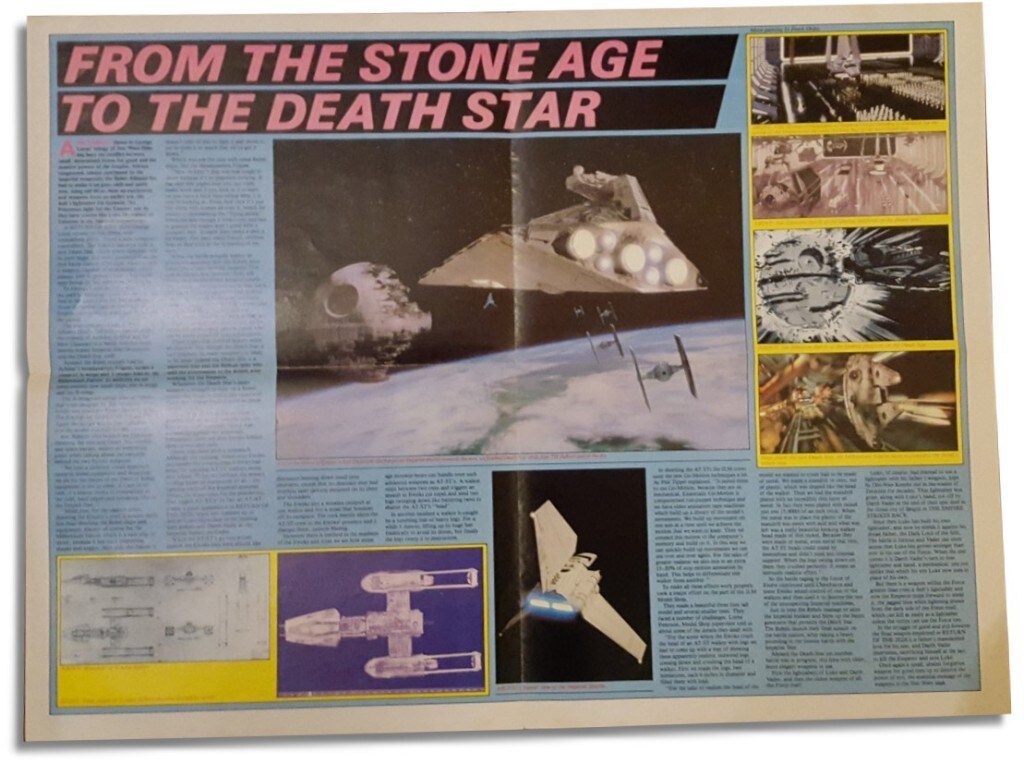 Fold out once again and you are treated to a selection of composite images, as well as (then) fresh new blueprints and concept art, along with close-up photographs of the Y-wing, matte paintings of the Death Star hangar, and Joe Johnstons’s fluid sketches. Titled "From The Stone Age To The Death Star," the article takes a look at the differences between the Rebellion and the Empire in both their goals and their technology. It’s clear that ILM was far more comfortable shooting the Millennium Falcon than they were trying to photograph ships like the Headquarters Frigate, Admiral Ackbar’s flagship.

“Now, Ackbar’s ship was real tough to shoot because it’s so shapeless looking,” said Ken Ralston, who led the visual effects team working on shooting the many ships. “It has very few angles that you can make work, and if you look at it straight on you have a hard time telling what you are looking at. From that view it’s just this thing with bumps all over it, which we ended up nicknaming the ‘flying pickle’.”

In 2016, with computer generated effects improving film by film and the lines between practical and CGI almost indistinguishable, it’s worth remembering that Jedi was state-of-the-art. No effects shot in movie history had more optical elements than shot SB-19, which had 63 separate moving spaceships comprising of 170 separate rolls of film. That four-second scene over the Death Star was never bettered in the optical age. These hands-on craftsmen engineered vistas and battles that still hold up today, and while the polish of the modern era may be more enticing to younger eyes, older fans can still smell the sawdust and glue that brought the original trilogy to life.

Techniques still relatively new were employed to bring the movements of the models even more realism. Go-Motion, used on both Dragonslayer in ’81 and Elliot’s bike in E.T The Extraterrestrial in ’82, was used to bring the AT-ST to life. Most notable -- and difficult to achieve -- was the smashing of the AT-ST head by two Ewok logs. The nickel head of the AT-ST was strong enough to retain its shape and thin enough to be crushed spectacularly when the lead-filled logs swung down. Ingenuity at its best. As with issue #2, the back page of the third issue gave us some unusual facts from Return of the Jedi. While most are fairly well known 33 years later, did you know that the language Leia speaks while disguised as Boushh is called Ubese? Maybe you didn’t know that sound effects legend Ben Burtt mixed in howls, bells, and screams to give his explosions more character? Or that the baby woklings were actually puppets operated by the mother Ewoks? And an AT-ST head is 1/15000th of an inch thick? That’s slimmer than the odds of making it through the day without quoting Star Wars, but then who’d want a day like that anyway?

Join me next time for the fourth and final issue of our journey through the Return of the Jedi poster magazine series!

Mark has contributed to Star Wars Insider for a decade, is the owner of Jedi News, writes for DeAgostini's Build The Millennium Falcon partwork magazine, and co-hosts RADIO 1138 on the Jedi News Network. He's a Rebel Legion UK supporter, an honorary member of the UK Garrison, and a friend of the Rebel Legion. When he’s not talking, tweeting, or writing about Star Wars, he can usually be found sleeping, where he’ll most likely be dreaming about Star Wars.

Star Wars: Return of the Jedi