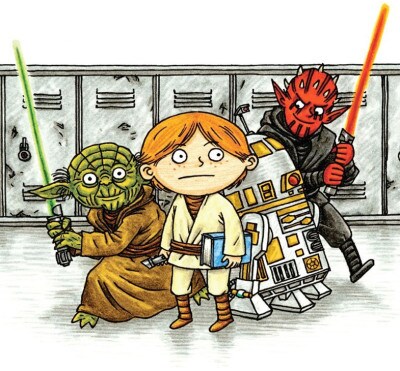 Scrambling for last-minute gifts in the holiday rush? Don’t worry, Star Wars publishing has you covered. Here are some easy ideas for the Star Wars fans in your life, whether they’re die-hard or more casual enthusiasts.

For the casual fan: Know someone who thinks Star Wars is a great series of movies, but isn't exactly doing Jedi cosplay at Star Wars Celebration? Consider Jeffrey Brown's miniature masterpieces, Darth Vader and Son and Vader's Little Princess. The humorous cartoons will warm the heart of anyone who's ever thought Darth Vader was cool.

For the literary fan: To be or not to be a great gift giver? The answer to that one is easy. Get the well-read fan in your life a copy of William Shakespeare's Star Wars by Ian Doescher, a re-telling of A New Hope done entirely in iambic pentameter, complete with etching-like illustrations by Nicholas Delort.

For the young fan: Start young fans off right with another gem by Jeffrey Brown: Star Wars: Jedi Academy. Readers follow the exploits and travails of young Roan, the Jedi Academy's newest student, as he faces all the challenges of middle school in a galaxy far, far away.

For the casual young fan: Worried that the young boy or girl you have in mind isn't quite enough into the Star Wars universe for an entire book set there? Consider Tom Angleberger's hilarious and charming Origami Yoda series, which takes place in our universe, but with some help from imaginary Star Wars friends. The most recent addition to the series is The Surprise Attack of Jabba the Puppett.

For the die-hard fan: For the fervent fan in your life, we recommend Kenobi by John Jackson Miller -- assuming the fan in question doesn't have a copy already! This novel delves into part of the time that Obi-Wan Kenobi spent on Tatooine in between Episodes III and IV, as he watches over Luke Skywalker. It's an essential read for anyone who's curious about Star Wars lore.

For the filmmaking fan: Know someone who doesn't just love Star Wars, but all of movie-making as well? The easy answer for them is The Making of Return of the Jedi by J.W. Rinzler. Delve behind the scenes of Episode VI like never before with tons of photos and anecdotes that make you feel like a fly on the wall during the making of the film. Of course, also available are The Making of Star Wars and The Making of The Empire Strikes Back, in enhanced e-book editions too, so take your pick!

For the artistic fan: Please the creative fan in your life with a copy of Star Wars Storyboards: The Prequel Trilogy, also by J.W. Rinzler, which collects the storyboards for all three films in one striking volume. Marvel over how these drawings contributed to the Star Wars universe, from page to screen.

For the comic book fan: Get them one of the recent trade paperback collections for two popular ongoing series: Star Wars: In the Shadow of Yavin by Brian Wood and Carlos D'Anda or Star Wars Legacy II: Prisoner of the Floating World by Gabriel Hardman and Corinna Bechko. Or for something slightly more high-end, splurge on the hardcover edition of Darth Vader and the Ghost Prison by Haden Blackman and Augustin Alessio.

Hope this helps your last-minute holiday shopping, whether the gift recipient is a loved one -- or yourself! Happy Holidays!