He was a spice runner? Poe Dameron's reunion with Zorii Bliss in Star Wars: The Rise of Skywalker hinted at the life the best pilot in the Resistance had led in his youth. But instead of bringing us answers, their brief banter on Kijimi only left us with more questions.

In Poe Dameron: Free Fall by Alex Segura, we can finally expect some answers. Set a few years after his mother, Shara Bey, passed away, the story finds a troubled teenaged Poe running away from home (and his Rebel hero father) to find adventure and -- of course -- some trouble.

In an exclusive excerpt from the book, which hits store shelves August 4, we find the young Poe grappling with his morality as he makes an escape from Yavin 4. Read on for more... 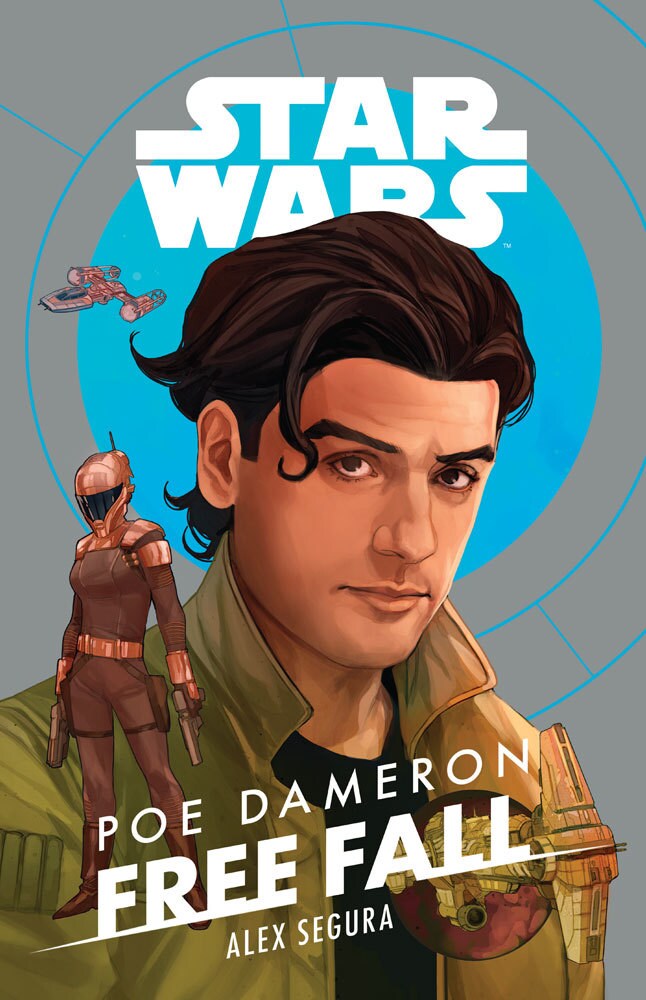 Poe swallowed hard and mentally walked through the steps to launch. He knew what to do, of that he had no doubt. He just hadn’t, well, done it before. Flying an A-wing was one thing -- especially one he’d sat in and tinkered with since as far back as he could remember. The Ragged Claw was different -- he was in someone else’s house and being asked to make dinner without really knowing where all the ingredients were. He knew he could cook, though. So it was time to turn on the heat.

Then the shooting started.

The blaster fire was sudden. It took Poe a second to realize what was going on. But the Spice Runners didn’t have his delay and immediately took their positions. Vigilch’s grip tightened on Poe’s shoulder.

Poe took a quick breath. He flipped the switch that engaged the ship’s thrusters, feeling the hum of the Ragged Claw’s deceptively powerful engines. Marinda Gan, Gen Tri, and Vigilch swayed as the ship lurched forward, still rattling from the barrage of blaster fire coming at them from the five officers on the ground.

“We’re being fired on!” Marinda yelled over the rising sound of the ship’s engine.

Before she could continue, the ship lurched forward again -- this time with more purpose, and it wasn’t stopping.

“What are you doing?” Zorii asked, scanning the controls from the copilot’s terminal. “We’re moving too fast for port traffic. We’re going to hit something.”

“Just trust me,” Poe said as the ship careened past the firing NRSB officers, seeming to shrug off their blaster fire, and wove around a few smaller ships in mid-transit. “Trust me.”

“What is going on?” Vigilch said as he toppled back-ward into the other two crew members.

Poe ignored their leader. He had to focus. Had to push past everything -- his fears, the blaster fire outside, his new allies. He wove the ship -- which was pushing speeds not meant for ground-level travel -- around the docking area, scraping and bumping the freighter toward open air in less than a minute.

“They’re behind us,” Zorii said, her voice alarmed but not alarmist. “Three NRSB orbital jumpers.”

“Good?” Zorii asked incredulously. “They’re on to us, Poe. I don’t know how familiar you are with this ship, but it’s not exactly the star of the fleet. Speed is not our strong suit.”

“Orbital jumpers don’t have hyperdrives -- once we get clear, we’re golden,” Poe said, pulling up on the ship’s throttle. The ship’s artificial gravity pushed him farther into his seat as the ship veered toward orbit around Yavin 4.

“Zorii, handle the weapons while our pilot tries to get us out of here,” Vigilch barked.

Poe clenched his jaw. He wanted to focus on what was in front of him -- piloting the ship off Yavin 4 -- but he couldn’t help thinking about the bigger picture. For better or worse, he was on the wrong side.

“On it,” Zorii said, swiveling her seat to scan the weapons terminal. “Laser cannons are locked. Just let me know when we should create an intergalactic incident.”

Poe nodded to himself. He felt his entire demeanor change. Felt himself push past his doubt and keep going, because the only other option was untenable. His movements gained strength and confidence. It was as if his entire being was making a decision -- to leave Yavin 4, to repudiate what came before and carve a new path for himself, and deal with the consequences later. Either that or he’d be in a jam not even his father’s connections could get him out of.

They were in orbit, speeding along with Yavin 4’s swampy atmosphere in the ship’s rear scopes. Poe caught sight of the jumpers, firing indiscriminately. He knew their laser cannons would sting like any bigger ship’s, but he also knew -- just based on the short time he’d been flying the Claw -- that the freighter was deceptively nimble. He wove through another barrage of fire, pulling the ship up -- as if heading directly back to Yavin 4’s surface -- only to wheel around.

Vigilch’s curses crashed with similar obscenities and cries of surprise from the rest of the crew, not tethered to a terminal. Poe ignored them. He leveled the ship’s navigation and positioned it where he wanted it -- right behind the jumpers.

“Shoot to harm, not to kill,” Poe interjected. “There are good people on those ships.”

“You have a lot to learn about being a Spice Runner, Poe Dameron,” Zorii said.

Poe watched as the Ragged Claw blindsided the two ships, laser fire blanketing the unsuspecting NRSB vessels. Zorii was true to his request, sending firepower in or around the essential areas -- just enough to disable them, not enough to destroy them -- making sure to spare whoever was piloting the ships. He made a mental note. He might be able to trust the woman named Zorii Wynn. He’d need a few allies.

But Poe didn’t get time to ponder his new status quo. Marinda Gan was behind him, her arm outstretched -- pointing at a larger, more present problem.

Poe told himself it couldn’t be true, but nonetheless a long shadow had fallen over the group and their small battered ship.

The Hammerhead-class cruiser seemed to almost pivot at the sight of the Ragged Claw, as if the giant vessel was sentient and able to flinch. The long cruiser could easily outgun the Claw, and Poe and his new crewmates knew it. The message sliced through the static of space, crackling to life on Poe’s terminal.

“This is the New Republic Security Bureau. You are harboring people wanted for questioning in regards to a crime committed on the surface of Yavin Four.” The voice sounded haggard and spent. “You are to disable your ship’s defenses immediately and prepare to be boarded and searched. If you do not reply shortly, we will begin occupation protocols.”

“The more things change,” Gen Tri muttered, their ethereal voice jarring Poe out of his own anxiety spiral. “It seems the so-called New Republic is sounding much like the Empire it dethroned, no?”

Poe ignored the comment. They had more important things to deal with. They were in deep trouble, and no matter how quickly he tried to work out a solution, he knew it was pointless. They were out of luck.

“Any ideas?” Zorii asked. “We’re still in a pretty dense gravity shadow -- we couldn’t jump to lightspeed if we wanted to, unless we override the system.”

Poe could hear Vigilch scampering behind them, the nervous pacing doing little to stave off their impending capture. Then his eyes widened. Could it work? Poe wondered. It would have to.

“Can you open a comm channel with that ship?” Poe said. “I have an idea.”

“If you want Poe Dameron to live, you will let us pass,” Zorii said, her tone gruff and defiant. The rest of the crew huddled around her seat as Poe looked on. “This point is not negotiable. Continue your aggression and we will be forced to eliminate the boy, and will do it without hesitation.”

Static and silence followed. The moments stretched on for what seemed like days but couldn’t have been more than a minute. Poe could hear his own breath.

“This isn’t going to work,” Vigilch muttered, stepping back from the control panel and pacing around the ship’s small cockpit again. He couldn’t get a few steps without bumping into something or someone. “We’ll have to shoot first. That’s our only chance of escape.”

“We’re outgunned, severely,” Marinda Gan said, turning her head quickly to face their leader. Her look was loaded with contempt. “Is it worth getting the first shot off if you’re just going to be overwhelmed after? Why don’t you let the girl do . . . what she’s meant to do?”

Gen Tri shot Marinda an uncharacteristically sharp glance. She didn’t respond. Vigilch shook his head as if to say, Fine, we’ll see how this plays.

“Where can we retrieve Dameron?” the NRSB officer said, each word slow and pained as it came through the speaker. “How do we know you’ll keep him alive?”

“We’ll drop him somewhere in the Sawaya system,” she said, her words coming across casually, as if she was asking for an extra portion at dinner. “You have our word.”

“The Sawaya system?” The NRSB officer sounded incredulous. “There are almost a dozen inhabitable planets. It could take—”

Zorii didn’t back down. The ruse was all they had. “That is our final offer,” she said, the casual air gone, her voice clear and tinged with menace. “We are prepared to die if these terms are not accepted.”

Poe watched her closely, his heart in his throat. Who was this girl -- this woman -- who could so casually toss aside all their lives, who knew how to outmaneuver a seasoned New Republic officer, who remained cool and collected while her crew of miscreants and criminals hemmed and hawed? Poe thought he was fairly tough for his age -- having dealt with his share of tragedy and knowing his own parents had fought valiantly for the New Republic. Where did this Zorii Wynn come from?

The response from the opposing ship was brief, but it took all their willpower to not whoop and holler with victory as the words filtered through.

Poe flicked the comm off hastily before anyone on the other end could somehow sense the smile forming on his face. He slowly steered the Claw out of orbit and away from Yavin 4. He turned to face Zorii.

“That was something else,” he said, his body humming with excitement. “You saved our butts.”

“You did, actually,” she said, her smile slight, as if things like this happened every day for her. Perhaps they did, Poe mused. “Tricking them into thinking you’d been kidnapped -- that was sharp. And you performed some fancy footwork getting us off the surface. Looks like you are a good pilot, after all.”

“Could use a copilot,” Poe said, nodding toward her seat. “You seem to fit the bill. Maybe you can show me some of those spice runner tricks in exchange?”

“Something tells me you’re no stranger to being a scoundrel, Poe Dameron,” she said, her smile widening for a split second, an unexpected warmth in her eyes. “But it’s a deal.”