Inside the Lucasfilm Archive: Lightsabers of Star Wars: The Rise of Skywalker

From Leia’s elegant weapon to the reforged lightsaber carried by generations of Skywalkers, we take a closer look at some of the beautiful prop hilts from the final film in the Skywalker saga.

The reforged Skywalker lightsaber looks like a family heirloom, from the weightiness of the metal hilt to the history etched across its surface. After being torn apart at the end of Star Wars: The Last Jedi, prop makers and concept artists literally mended the iconic weapon once carried by Luke Skywalker and his father before him for Rey’s last stand in Star Wars: The Rise of Skywalker. 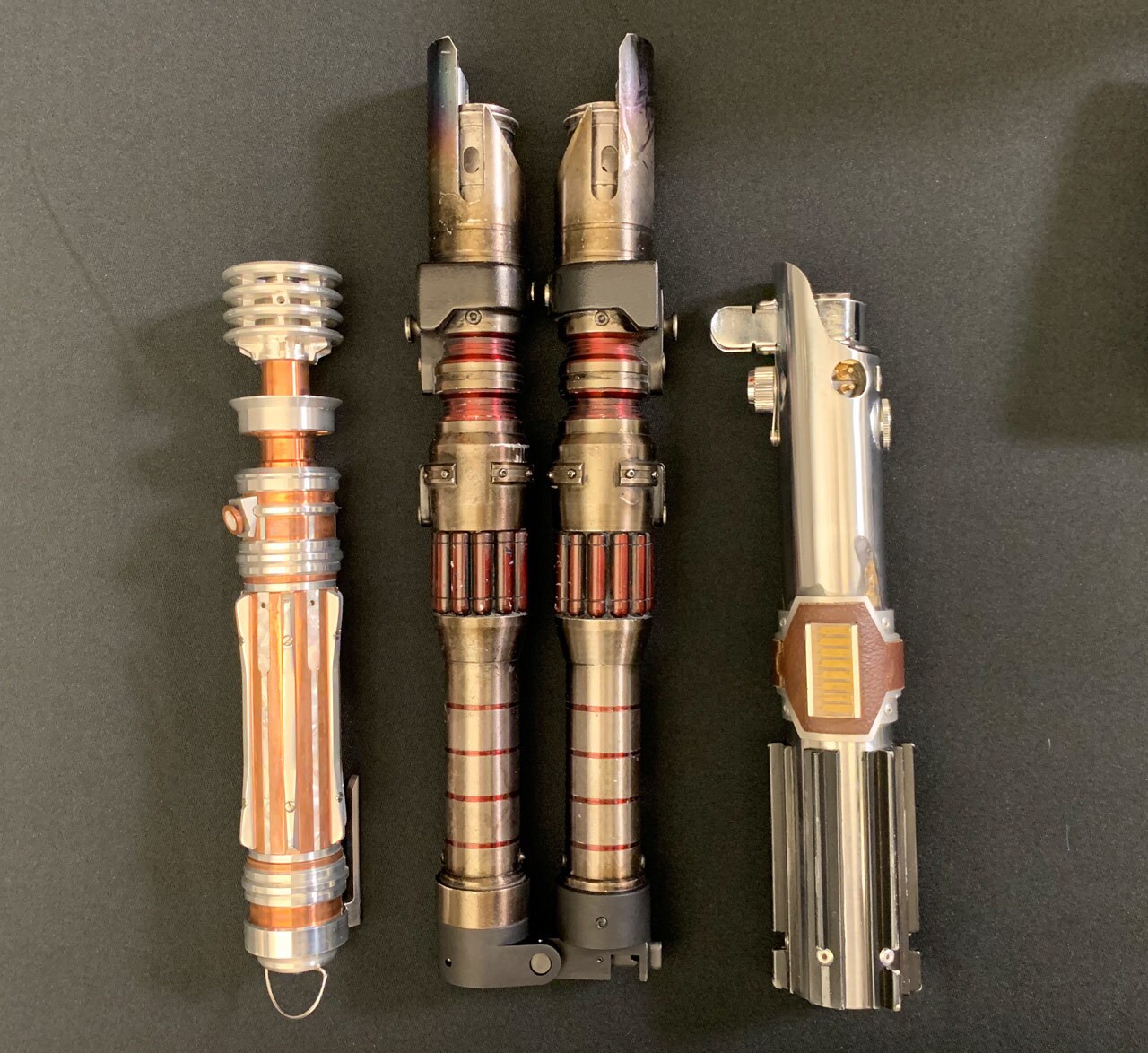 Recently, Lucasfilm Archivist Madlyn Burkert shared three of her favorite lightsaber prop pieces from the final film in the Skywalker saga, highlighting hidden details in the craftsmanship for each one. 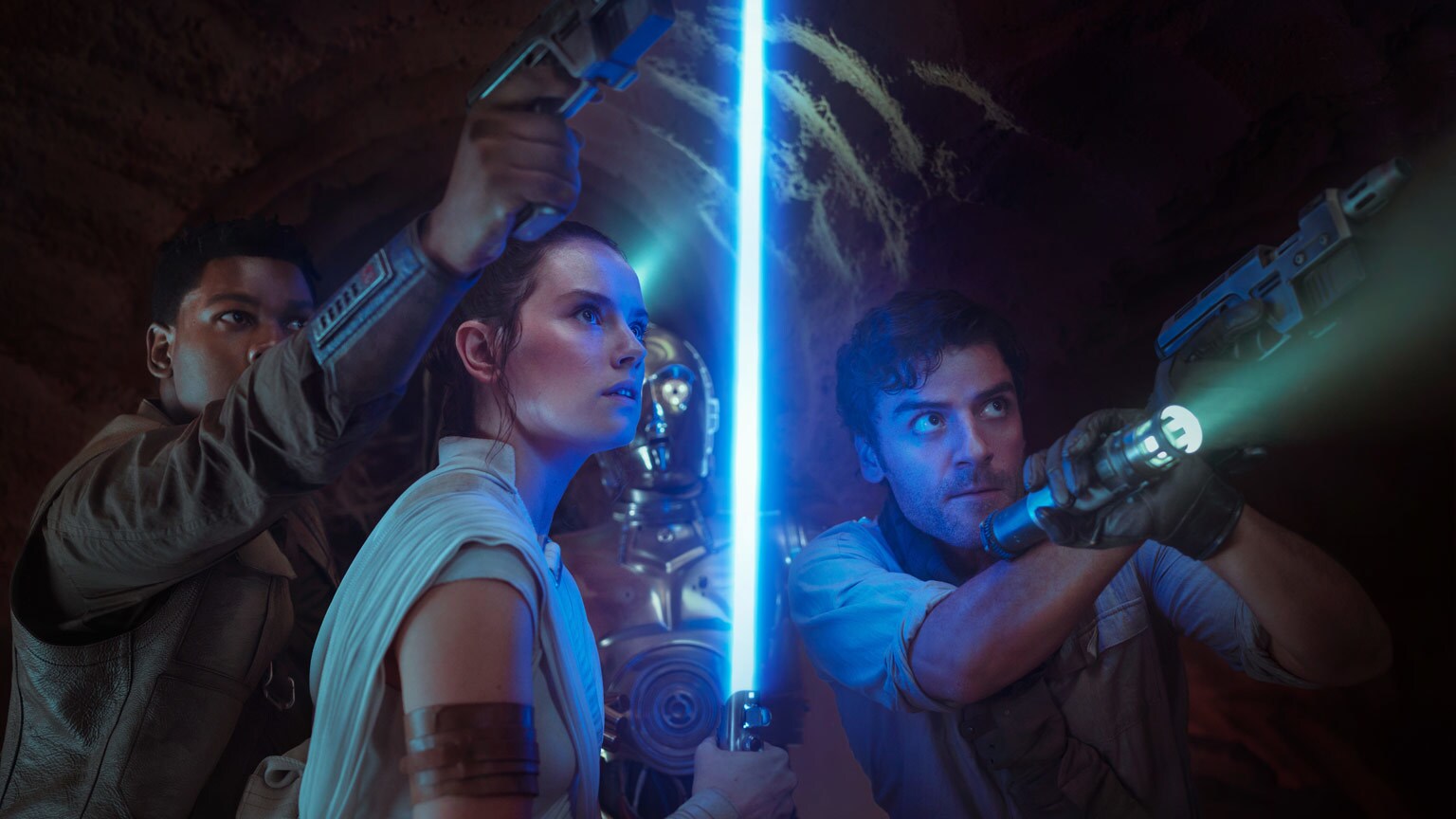 Originally created from a Graflex camera flash handle for the original trilogy, modern-day movie makers recreated the lightsaber, minus the stamp on the bottom that showed it was made in New York, with a machine-tooled body made to specifications. “Of course this is the OG design,” says Burkert, handling the prop in gloved hands. Left in the care of the scavenger-turned-Jedi Rey, prop makers added burned-in soldering marks, and a new piece made of metal and leather to join the two broken halves. 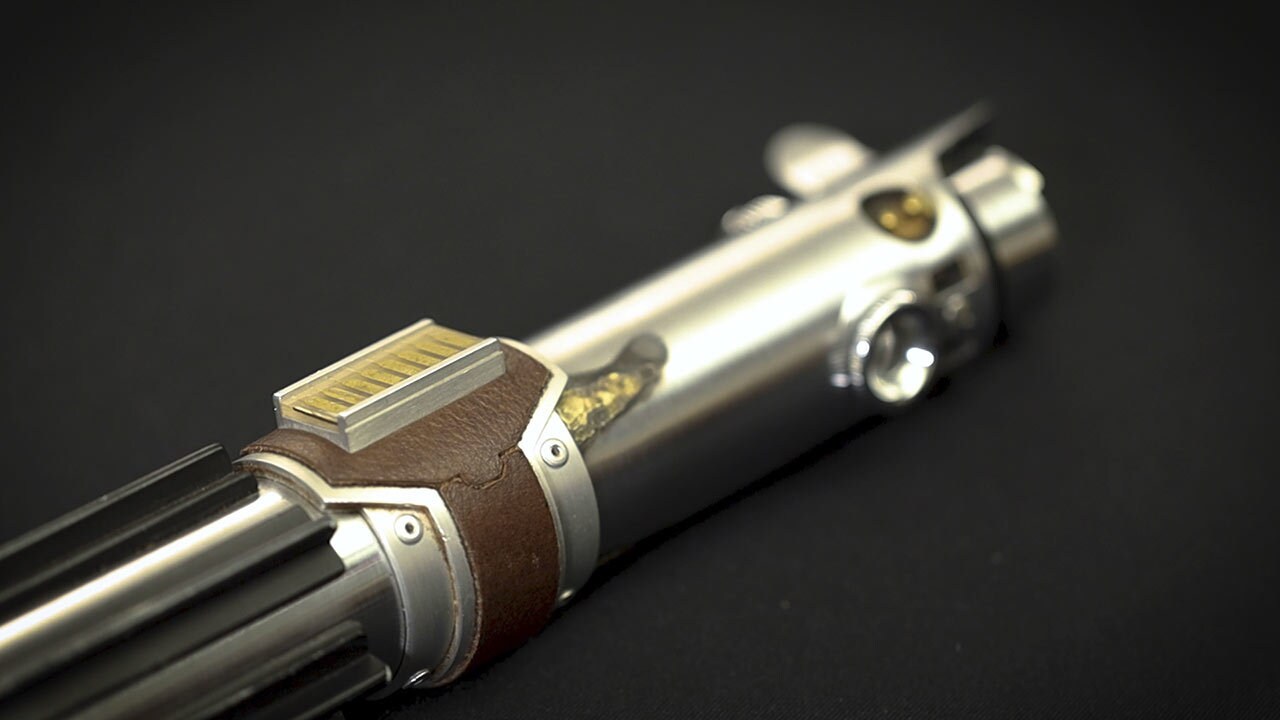 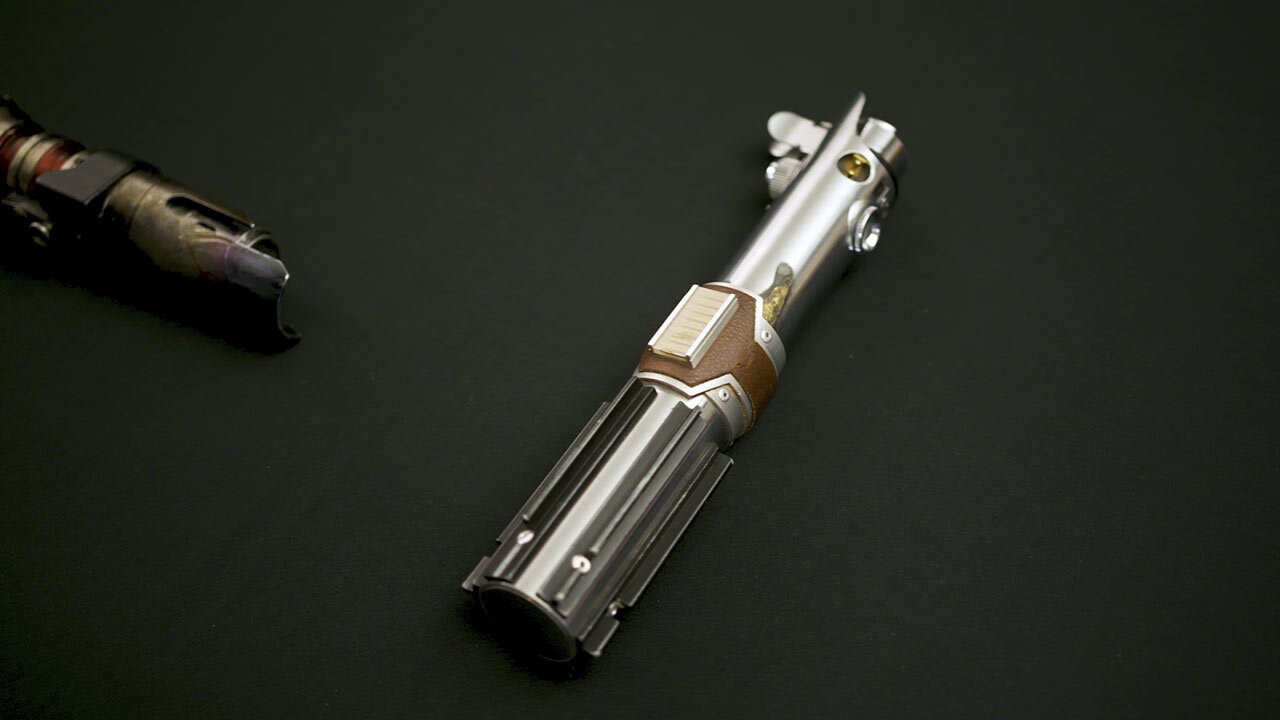 The finished piece is as symbolic of the ever-elusive quest for balance in the Force sought throughout the nine Skywalker saga films as it is an acceptance of the limited tools and time Rey would have at her disposal in a galaxy at war. “If you look at the broken lightsaber from the end of The Last Jedi, this is supposed to show us that she’s taken that literal exact one and fixed it,” Burkert says. “These are her solder marks. They’re not covered up. They’re not refinished. Because guess what? Rey ain’t got no time for that.”

Although the new Skywalker saber forgoes the markings of our own Earth manufacturers, Dark Rey’s dual blade has a telling Easter egg discreetly hidden on the hinge -- a stamp that marks that piece as being made in Germany.

With a flick of the wrist, the switchblade-style weapon unfolds with a satisfying snap. That is, as long as you’re wearing gloves and handling the prop with care. 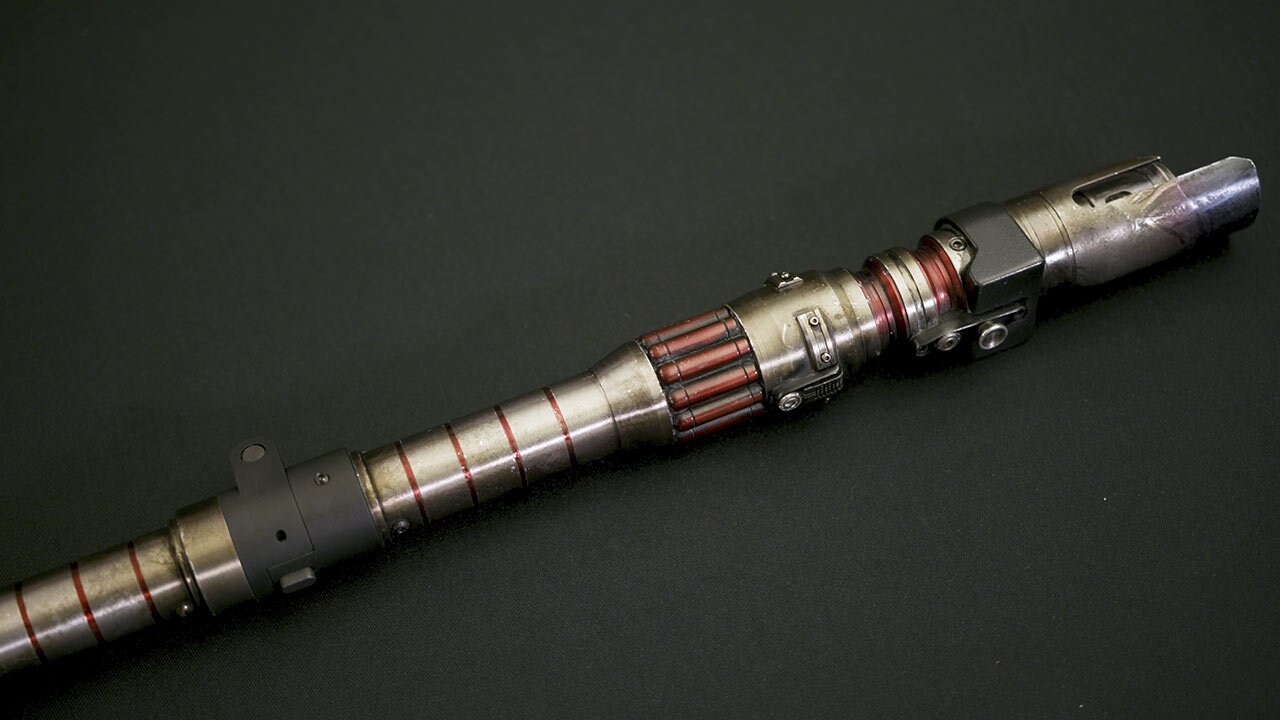 Burkert says early designs envisioned the dark side saber as being created from Rey’s staff, but it was decided that the weapon would have been too much in line with the light side version of her character. To further cement the difference between the two, the double-sided blade, reminiscent of the one carried by Darth Maul in Star Wars: The Phantom Menace, was given a fine deco of black and red accents. “There’s a lot of red details on this, and we often associate that color with the dark side, with the Empire or the First Order,” Burkert notes. 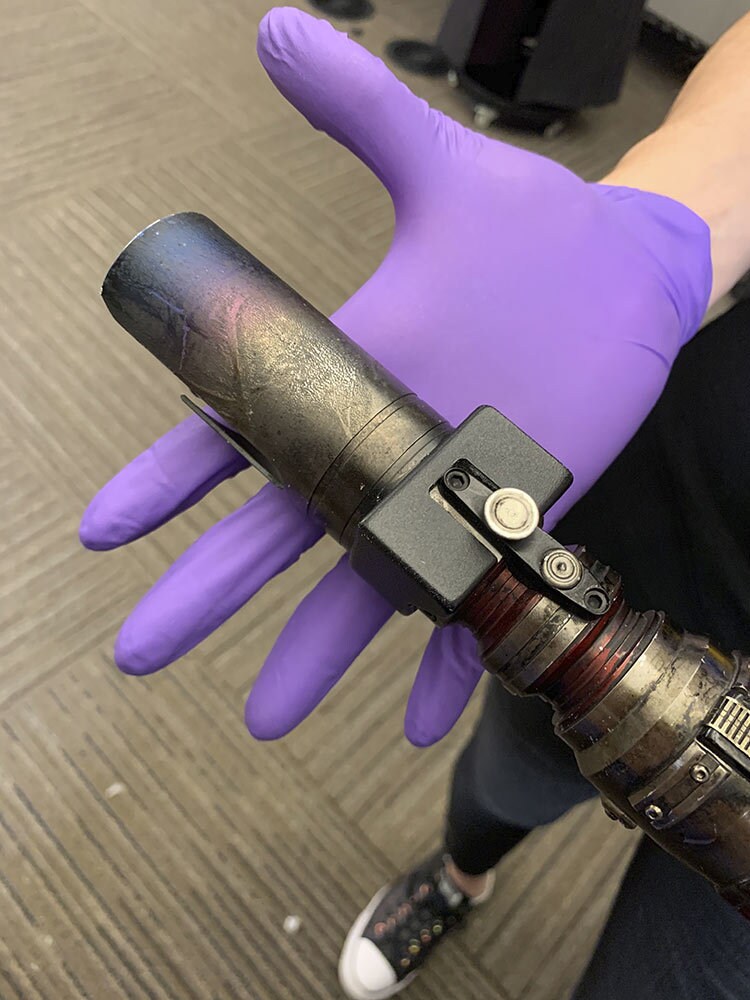 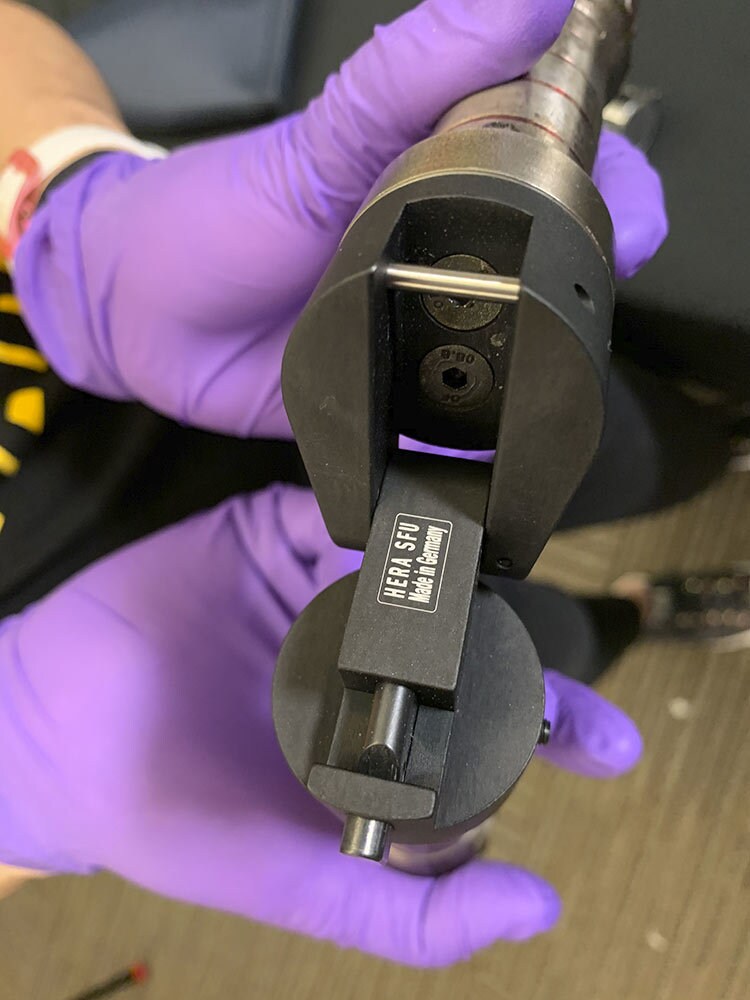 Lightsaber aficionados may notice a black accent near the end where the blade ignites in the same shape as a detail found on one of Darth Vader’s lightsabers, she adds. And the piece is held together by a pair of strong magnets when it’s hanging off a belt. “If you are going to open it up, especially for a piece of action, there needs to be some weight to it, some deliberateness to it,” Burkert says. 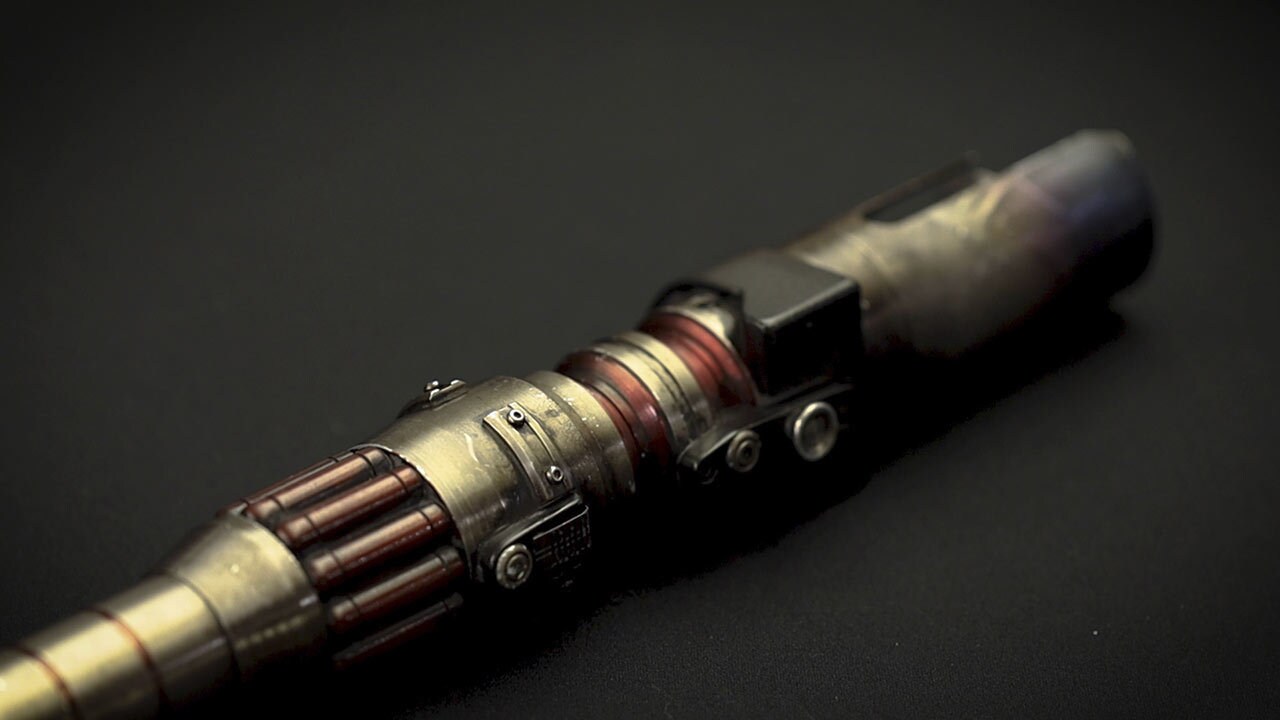 To give the weapon a gritty, used feeling, the ends are slicked with an oil sheen – “It kind of gives you that sense that heat has come out of this piece on the regular,” Burkert says -- and there are paint details to show wear and tear. But there are also a few chips in the paint from the prop’s use during production. As an archivist, Burkert says it’s important to retain that history, although her team would make repairs on a piece if needed. “There are some parts of it that you can tell are painted to look like it’s worn. And other elements that are clearly paint loss suffered during filming,” Burkert explains. “We like to keep it as is just to show us this is part of the life of this object.”

Far different from Dark Rey’s lightsaber, the petite hilt created for Leia Organa is a thing of elegant beauty. The prop, in a bag marked with “a ‘Q’ for queen,” Burkert notes while opening the prop’s storage container, was inspired by the streamlined shapes inherent in the Art Deco movement. “It’s sort of streamlined and mechanical, but also organic at the same time,” Burkert says, moving the hilt to show a flowery detail. “You have these sharper lines, but there’s also this very cool almost like sunburst design. And I think of that as being a little more organic.” 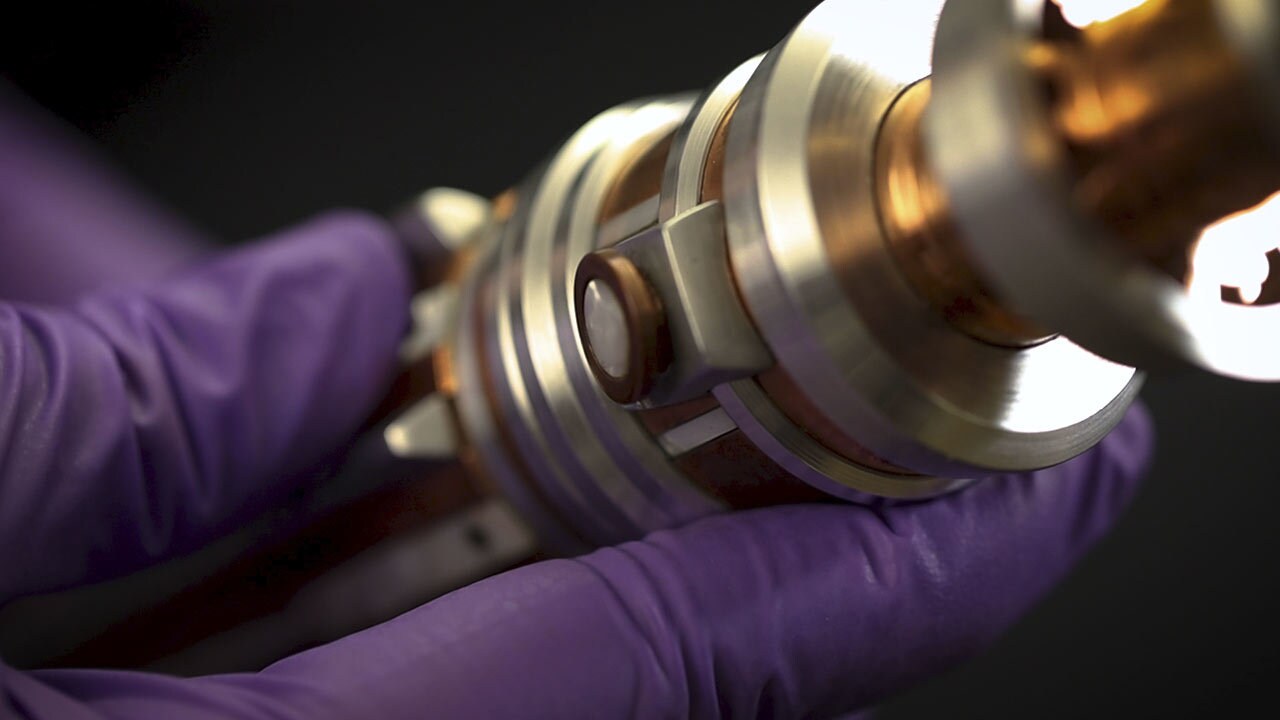 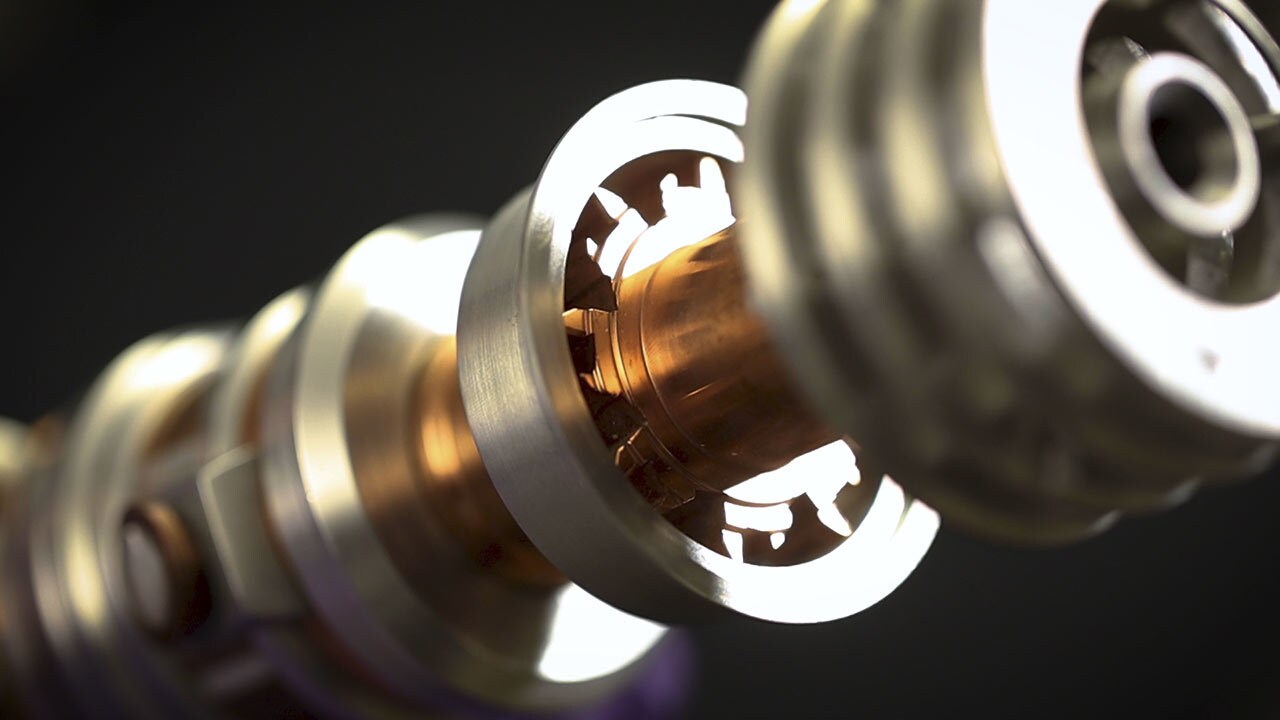 A silver and rose gold base along the grip has been accented with Mother of Pearl inlay, and designers added a D-ring to the end to match other lightsabers of the era. “It has a belt hook but it also has the D-ring that some original trilogy lightsabers had.”

It’s a distinctive design for a unique character like no other, and Burkert says it was important to filmmakers that the hilt was a fitting tribute to Leia and everything the character, and the late actor Carrie Fisher, meant to the fans and the films. 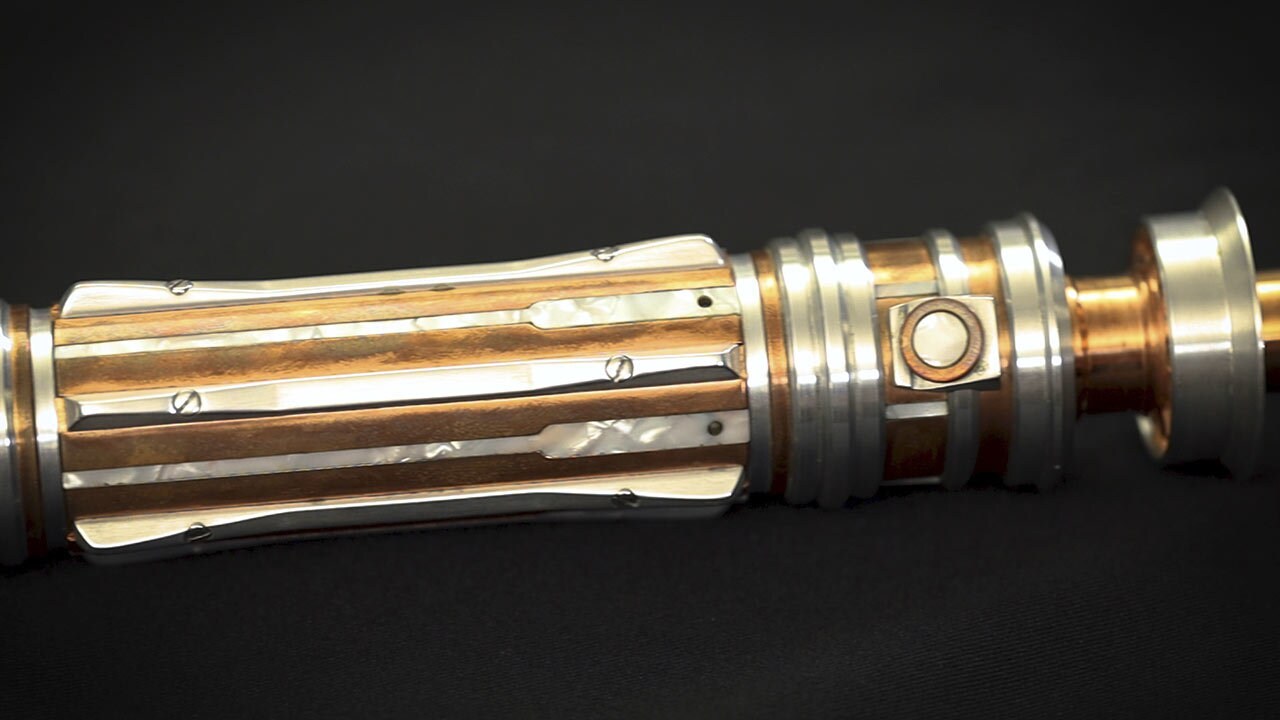 “Knowing Leia this whole time, we never saw her to have a lightsaber, so it felt really important that she have something very uniquely her,” Burkert says. As a royal princess of Alderaan and the biological daughter of Queen Padmé Amidala, the construction is also a nod to the immaculate wardrobe worn by Padmé for the prequel films. “The work that Trisha Biggar did to make them look expensive and like the most high-end fashion house had created them, I feel like that same idea is applied to this lightsaber in terms of design,” Burkert says.

“It looks feminine. It feels expensive. And it feels special.”

Learn more about the props and costumes from Star Wars: The Rise of Skywalker in the video below!


Star Wars: The Rise of Skywalker is available now on Digital, 4K Ultra HD, and via Movies Anywhere, and on 4K Ultra HD, Blu-ray, and DVD.