The author talks to StarWars.com about her surprise prequel to Queen's Shadow.

E.K. Johnston's YA novel Queen's Shadow, released earlier this year, shone a much-overdo spotlight on Padmé Amidala and her handmaidens. Well, cue the thunderous applause: StarWars.com is thrilled to announce that Johnston will return to these prequel-era favorites with Queen's Peril, a prequel to Queen's Shadow coming May 5, 2020. It's available for pre-order now, and you can get a first look at the gorgeous front and back covers by Tara Phillips below. 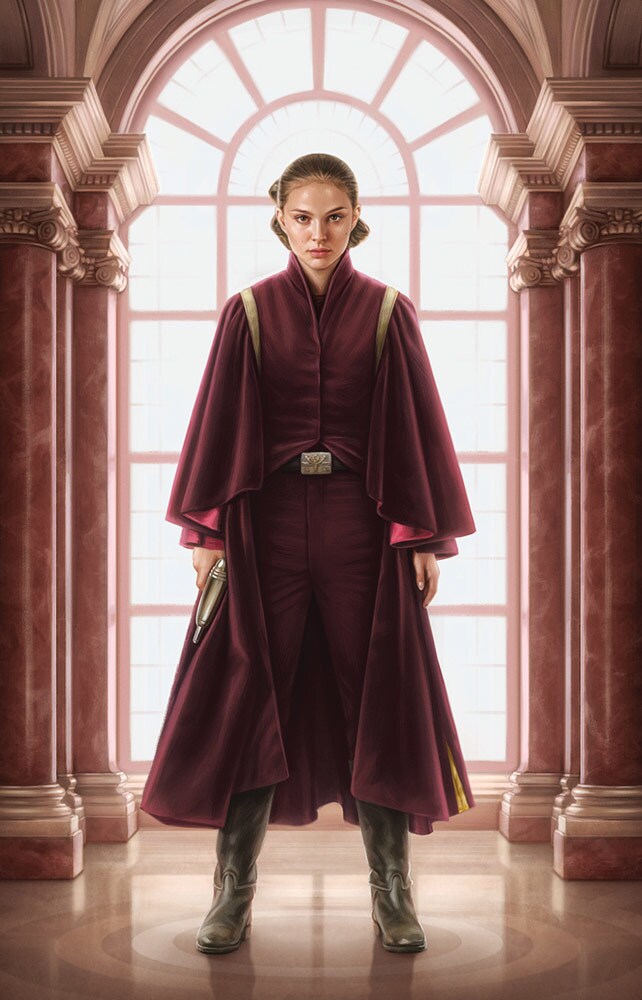 While few details about Queen's Peril are ready to be revealed, StarWars.com caught up with Johnston for a few questions about revisiting Our Queen.

StarWars.com: There was a lot of excitement around Queen's Shadow, especially from fans of the handmaidens and Padmé who feel like these characters have been underserved. What did that mean to you?

E.K. Johnston: The excitement and reception were absolutely amazing. I will never forget turning my phone back on when I landed in Chicago for Celebration and getting texts about the bookstore being sold out...and that was a month and a half after it had been released! It was everything I could have hoped for.

StarWars.com: You're returning to Padmé with Queen's Peril. What can you tell us about the book?

E.K. Johnston: I AM SO EXCITED. Broadly put, this was the first Star Wars book I ever pitched, way back in 2014. We had to update it a bit since, you know, there's a been a bit of Star Wars since then.

It's Padmé. It's the first round of handmaidens. It's Naboo. And a lot of it is giving Quarsh Panaka gray hair. Also, the Trade Federation is probably going to show up and cause problems.

StarWars.com: Did the reaction to Queen's Shadow impact the writing of Queen's Peril?

E.K. Johnston: Sort of? I had a pretty good idea of what I wanted to do, but hearing readers be excited about all the dresses and other elements that I loved gave me more space to play going back in.

StarWars.com: What are you most excited about with Queen's Peril that you might not have had the opportunity to cover in Queen's Shadow?

E.K. Johnston: Okay, so the whole "I would have sent them to a Backstreet Boys concert" thing started as a half-joke panel answer, but...I got to send them to a Backstreetish Boysish concert. Also, I got to write the Original Six, as it were. I love Cordé and Versé and Dormé, but this was like sitting down with very old friends.

StarWars.com: The Phantom Menace celebrated its 20th anniversary this year, and the movie and its characters, including Padmé, seem more popular than ever. What's your take on that?

E.K. Johnston: It makes me so happy. The prequels are how I found my way back to Star Wars, and the source of most of my fannish relationships, and being able to talk about them so openly is pretty great.

Queen's Peril arrives May 5, 2020, and is available for pre-order now.