The author discusses his upcoming book, which features three generations of police case files from across the Star Wars saga.

"You will never find a more wretched hive of scum and villainy." So said Obi-Wan Kenobi of Tatooine's Mos Eisley spaceport. And you know what? His statement is debatable -- because the galaxy is filled with wretched hives and even more scum and villainy, as Lucasfilm's Pablo Hidalgo confirms in his appropriately titled upcoming book, Star Wars: Scum and Villainy - Case Files on the Galaxy's Most Notorious.

Scum and Villainy, however, isn't just an encyclopedia of bounty hunters, gangsters, and baddies who have the death sentence on 12 systems; rather, it's a fully-illustrated, hardcover tome made entirely of notes and intel from three generations of a family of police officers, spanning the eras of the Republic, Empire, and New Republic. Set for release on October 23 from Epic Ink and available for pre-order now, Scum and Villainy looks to be an essential release for all wanting to learn more about the seedy figures of the galaxy...without having to step foot in places like Jabba's palace. StarWars.com got an early look at the book and caught up with Hidalgo to discuss his affinity for Star Wars's shadiest, a long-lost letter from Hondo Ohnaka, and how Scum and Villainy builds on Solo: A Star Wars Story. 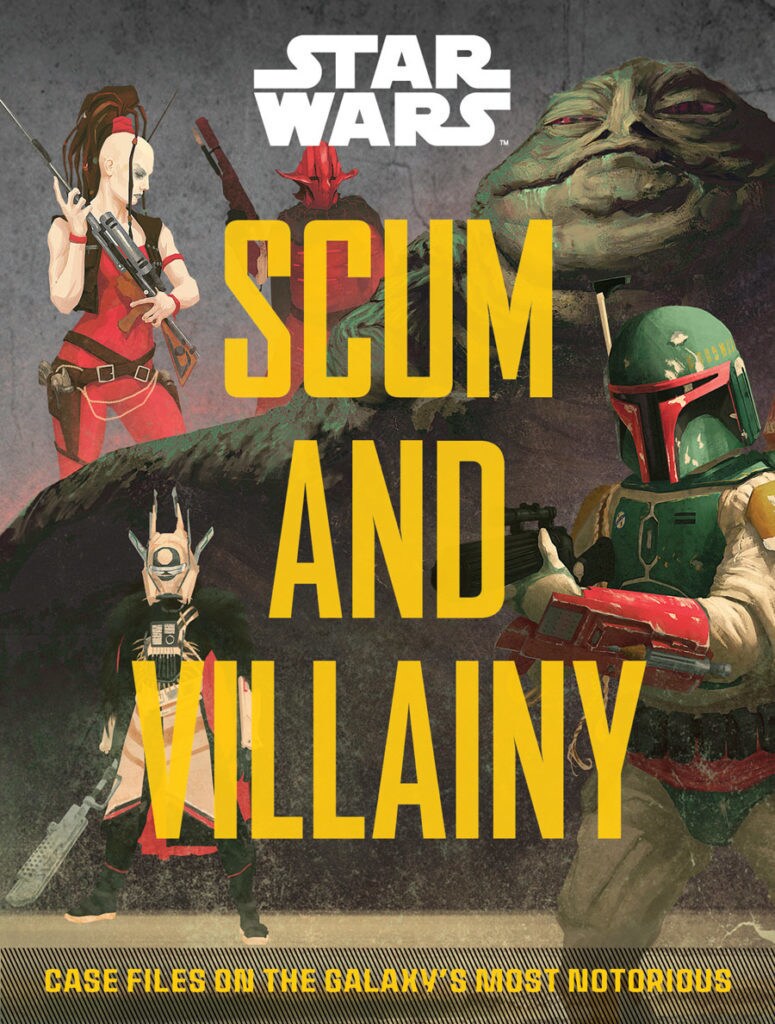 StarWars.com: Considering your well-documented love of the Mos Eisley cantina, I'm not surprised you wrote a book called Scum and Villainy. As a longtime Star Wars expert, what appeals to you about the seedy underbelly of Star Wars?

Pablo Hidalgo: Variety. This is where individuality really shines. From a distance, political factions often tend to blur into uniforms and banners, but in the criminal underworld, you’re more likely to find really colorful individuals trying to leave their personal mark, because they’re not fighting for a greater cause. They’re just in it for themselves. So you end up with a really rich rogue’s gallery of characters.

StarWars.com: The conceit that the book is culled from the files of a familial line of police officers is really fun and pretty unique for a Star Wars book. How did you land on that?

Pablo Hidalgo: I thought what worked really well with Propaganda was treating the book as an artifact from the universe written by someone who lives in it. In that case, it was a long-lived artist looking back at decades of propaganda art. And that author doesn’t need to be free of bias or baggage. He’s definitely coloring the facts with his experience.

We wanted to do something similar with this one, but the multi-generational angle allows for different points of view and different comments on what law enforcement is to different societies. In this case, a Republic official, an Imperial official, and a New Republic official. And since generations disagree with each other on history, it makes or some nice drama lurking beneath the text. 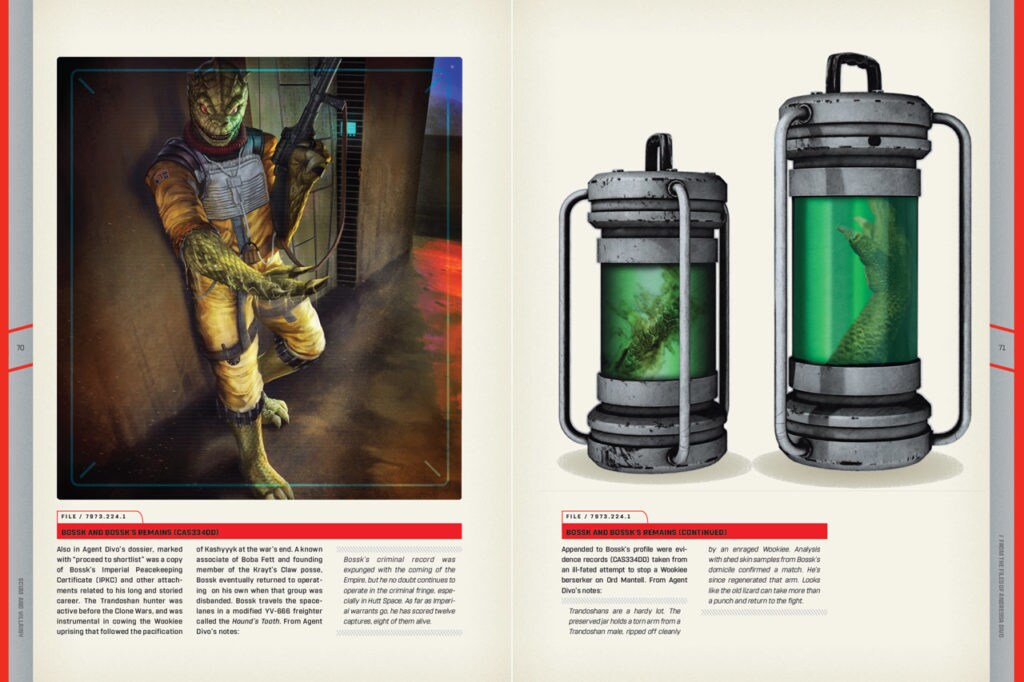 StarWars.com: You throw in phrases like "My mother wore the badge during the Galactic Civil War," which I really enjoyed -- it's like '70s cop-show terminology thrown into Star Wars.

Pablo Hidalgo: I am a huge fan of old detective shows -- Columbo, Kojak, The Streets of San Francisco -- so there is definitely influence in there. In the same way the core of Star Wars synthesizes samurai, war, and western movies of yesteryear, its criminal tales sometimes pull from cops and gangster pics of old, when Edward G. Robinson and James Cagney put their mark on the genre.

StarWars.com: The art is quite beautiful. Did you collaborate with the artists at all in terms of direction, or was it just a pleasant surprise when pieces would come in?

Pablo Hidalgo: My main point of collaboration was with my editor, Delia Greve, and the art director for the project, Sam Dawson. I didn’t work with the artists directly, but Delia and Sam shared works in progress as they came in, and that was exciting. When we started the project, we knew it was to have a real "artifact" feel in terms of the visuals, with mugshots, evidence reports, and surveillance imagery aplenty. I put together a number of mood-boards for the spreads as we plotted the book, some of which contained real life mugshots that I found on the internet. For instance, the starting point of the Dex’s Diner images was photos of mobsters from the Donnie Brasco case. 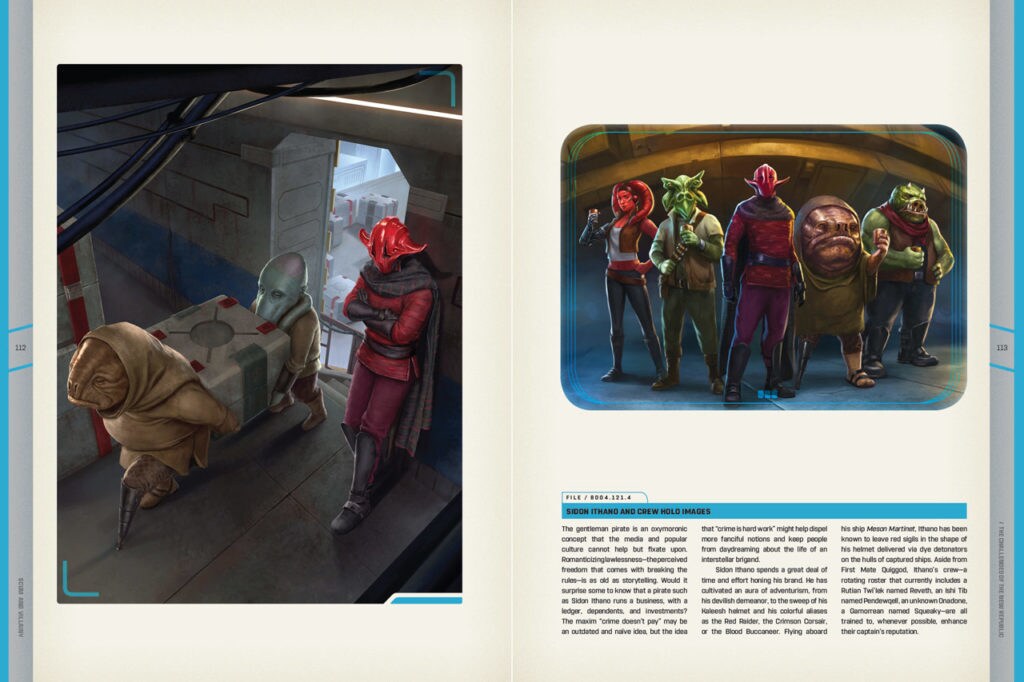 StarWars.com: The case files are punctuated with some little surprises, like a found letter from Hondo Ohnaka -- left to someone he was robbing about what an honor it is to be robbed by Hondo Ohnaka. Would these just kind of come to you as you were writing, or was there a set plan to include these supplements, which really add depth and levity to the book?

Pablo Hidalgo: It was a mix of surprises and revelations as the pieces came together, and other elements that were deliberately panned from the start. The Hondo example is a case where what makes Hondo so unique is his boisterous voice, so how do you capture that in evidence? Have his words speak for him. And it ties into some old lore about pirate letters of marque that ran in an article in the old Star Wars Adventure Journal about pirates and privateers.

StarWars.com: The breadth of events, artifacts, and characters featured is really impressive, including some content that hasn't really been fleshed out before, like the Mandalorian armor in Dryden Vos's study. Did you want to use the book as an opportunity to further explore and establish more details in continuity?

Pablo Hidalgo: There are a couple of threads that this book continues from other storylines and ideas. An example I can think of is in Solo: The Official Guide that came out earlier this year, there’s a very fleeting mention made of Dryden Vos’s personal physician. Scum and Villainy picks up that idea and identifies him. Given that Vos has a Decraniated server in his staff, you can kind of guess where this is going. That’s the kind of connectivity that’s there lurking in the text, but isn’t called out with any sort of attention, since I hope it’s more rewarding for people to speculate about it.

StarWars.com: Finally, pick one bad guy or gal in Scum and Villainy that you personally think gets a bad rap.

Pablo Hidalgo: The Imperial era makes it really hard to peg players as good or bad, given how awful the government is. A lot of crooks from that time are more admirable than the Law! We see folks like Liana Hallick with a mugshot and wanted poster, and know her to have more integrity than the forces looking to apprehend her.

Scum and Villainy arrives October 23 and is available for pre-order now.

See more of Scum and Villainy in this week's episode of The Star Wars Show!


Dan Brooks is Lucasfilm’s senior content strategist of online, the editor of StarWars.com, and a writer. He loves Star Wars, ELO, and the New York Rangers, Jets, and Yankees. Follow him on Twitter @dan_brooks where he rants about all these things.
Pablo Hidalgo Star Wars Books SWS Scum and Villainy