Original Trilogy Novelizations: A Look Back 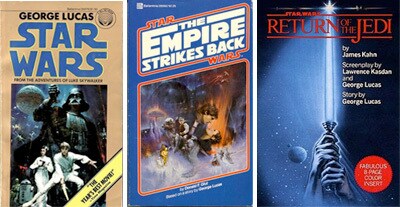 Gather around, kids, and I’ll tell you a story from the very dawn of time…

This past month has seen the anniversaries of the releases of all six Star Wars films so far. The nostalgia hit me hard for the anniversaries of the original trilogy films, as I am (cough, just barely) old enough to have seen them in the theater when they were first released. So it got me thinking about my experiences seeing those films for the first time. And that in turn got me thinking about the novelizations.

Growing up as a kid who loved Star Wars (and entertainment in general) wasn’t so easy in the 70s and 80s. Once you saw a movie, that was it. It wasn’t available to be in your home or on your computer a few months later. (Not that our computers would even have been capable of such a thing!) You had to be content with re-living the movie in your memory – or through comics, storybooks, and novelizations.

Novelizations were a lifeline when I was growing up.  As someone who already loved books, they were the perfect way to re-live my favorite movies over and over again. Plus they had the added bonus of getting inside the characters’ heads, and sometimes even portraying deleted scenes.  (Beat you to the punch, DVD extras!) While I had novelizations for a bunch of movies, the Star Wars books were definitely my favorites. Each one has a particular flavor, being written by three different authors, and I appreciated each one differently.

Star Wars by “George Lucas” (actually Alan Dean Foster – but as a kid I didn’t realize that of course and was so excited that George himself must have written the book!)  is the densest of the three, a quality that I didn’t necessarily appreciate as a child but appreciate very much, now. This book was a treasure trove of information, including scenes between Luke and Biggs, Luke and his friends at Anchorhead, and Han and Jabba (described as “a great mobile tub of muscle and suet topped by a shaggy scarred skull”). I think what intrigued and excited me the most was that this book even gave us a name for the Emperor—Palpatine! It felt like it came from the pen of George himself, pulling back the curtain on this world he had created.

The novelization for The Empire Strikes Back, by Donald F. Glut, was my favorite of the three since that movie is my favorite of the three. My original copy of the paperback saw so much use that it literally started falling apart. And as a kid it wouldn’t be so easy to buy another copy! So I used Scotch tape to hold it together as much as possible. Still, it was a mess. But what a wonderful mess. The scene of Han and Leia’s kiss is still burned indelibly on my brain. (“Now, as she looked at him, she thought he had never seemed more handsome, but she was still the princess.”) Glut does a skillful job of bringing the film to life through description—all the more impressive considering he hadn’t actually seen the movie.

The Return of the Jedi novelization by James Kahn has an earnestness of emotion to it that matches the tone of the movie, and killer lines like “The court of Jabba the Hutt roiled in malignant ecstasy.” Kahn also manages to make Leia an active participant in the Jabba’s palace scenes in a way the movie doesn’t execute, which naturally I appreciated. It also features the deleted sandstorm scene, which, in 1983, was super exciting to read. I remember buying this book at our local supermarket, weeks before the movie came out, and torturing myself by starting to flip through it, and then stopping myself. That sort of tantalizing torture doesn’t really exist anymore.

I’ll be forever grateful to the novelization authors for helping me to relive my favorite movies, at a time when home viewing simply wasn’t an option. And as an adult, I fully appreciate the excellent work done by these authors to transport us to a galaxy far, far away. There’s a fine art to good novelization writing, and all three of these books are excellent examples of the form. Even if you have your Blu-ray editions playing on your HDTV on repeat, they’re still great reads…and reminders of a time gone by.