An exciting new future featuring the continuation of the Star Wars movie saga! 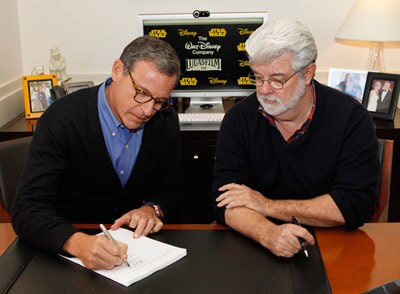 An exciting new future featuring the continuation of the Star Wars movie saga was announced on October 30, as the Walt Disney Company enters an agreement to acquire Lucasfilm Ltd. from George Lucas. Backed by the global reach and brand stewardship strengths of Disney, the future of Star Wars is now under the direction of acclaimed film producer and studio executive Kathleen Kennedy, co-chairman of Lucasfilm. Kennedy and Disney plan a slate of new Star Wars feature films, beginning with the long-awaited Star Wars: Episode VII, targeted for release in 2015, followed by Episodes VIII and IX. Additional feature films are expected to continue the saga and grow the franchise well into the future.

"For the past 35 years, one of my greatest pleasures has been to see Star Wars passed from one generation to the next," said George Lucas. "It's now time for me to pass Star Wars on to a new generation of filmmakers. I've always believed that Star Wars could live beyond me, and I thought it was important to set up the transition during my lifetime. I'm confident that with Lucasfilm under the leadership of Kathleen Kennedy, and having a new home within the Disney organization, Star Wars will certainly live on and flourish for many generations to come. Disney's strength gives Lucasfilm the opportunity to blaze new trails in film, television, interactive media, theme parks, live entertainment, and consumer products."

The acquisition has Lucasfilm and its creative works and operations enter into Disney's global portfolio of world-class brands that include Pixar and Marvel. "Lucasfilm reflects the extraordinary passion, vision, and storytelling of its founder, George Lucas," said Robert A. Iger, chairman and chief executive officer of The Walt Disney Company. "This transaction combines a world-class portfolio of content including Star Wars, one of the greatest family entertainment franchises of all time, with Disney's unique and unparalleled ability to leverage creativity across multiple platforms, businesses, and markets to generate sustained growth and drive significant long-term value."

Kathleen Kennedy, current co-chairman of Lucasfilm, will become president of Lucasfilm, reporting to Walt Disney Studios Chairman Alan Horn. Additionally she will serve as the brand manager for Star Wars, working directly with Disney's global lines of business to build, further integrate, and maximize the value of this global franchise. Kennedy will serve as executive producer on new Star Wars feature films, with George Lucas serving as creative consultant.

Under the deal, Disney will acquire ownership of Lucasfilm, a leader in entertainment, innovation and technology, and its operating businesses in live action film production, consumer products, videogames, animation, visual effects, and audio postproduction. Disney will also acquire the substantial portfolio of cutting-edge entertainment technologies that have kept audiences enthralled for many years. The present intent is for Lucasfilm employees to remain in their current locations.

The acquisition has been agreed upon by the board of directors of both companies, and is undergoing customary regulatory review and should be complete in the next few months. For further developments on the continuation of the Star Wars saga, including Episode VII, continue checking StarWars.com.