Much to Learn You Still Have: 7 Things You Might Not Know About Trandoshans

If your knowledge ends with Bossk's snarl in The Empire Strikes Back, this may be the article for you.

Trandoshans are, quite frankly, giant lizard people, and though they first came on the scene in The Empire Strikes Back with the appearance of the bounty hunter Bossk, there is still a lot that most Star Wars fans don’t know about these scaly, sentient beings. For starters, they didn't have a name until 1989 with the release of the roleplaying game book Galaxy Guide 3: The Empire Strikes Back. Intrigued to learn more? I’ve gone ahead and done the legwork for you. Here are seven things you may not know about Trandoshans.

1. You may have seen Bossk before The Empire Strikes Back.

Not to immediately take back what I just told you, but the character of Bossk was actually revealed prior to his first look in the film. In 1979, Kenner announced a “secret action figure” that could be obtained by sending four proofs-of-purchase to the toy company. The figure, complete with laser pistol and moveable limbs, came with a flyer describing Bossk’s character in the film before his official debut. Having an awesome lizard-man bounty hunter toy was probably worth the mild spoiler for any child in the early '80s. 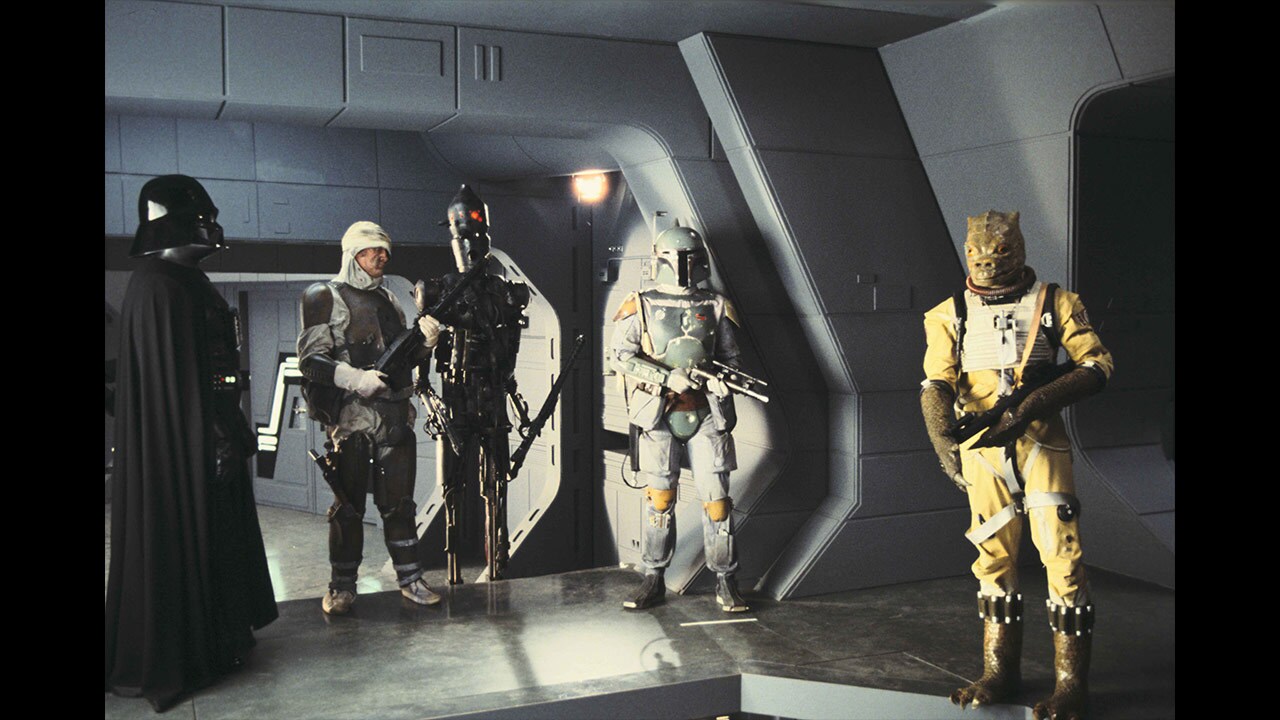 The bounty hunter lineup in The Empire Strikes Back has become iconic, but when Bossk and the rest of the boys came onto the scene, they weren’t the most original looking crew in the galaxy. That is, if you’ve seen “The Tenth Planet” episode of Doctor Who’s fourth season. The yellow getup now much more famous for covering the Trandoshan is actually a High-Altitude Windak Pressure Suit used by Britain’s Royal Air Force in the 1960s. The suit wasn’t only utilized in the second film of the saga. The outfit actually predates Bossk and can be seen on the character BoShek in A New Hope’s cantina sequence.

Fun fact #1: According to director Irvin Kershner, Admiral Piett’s disgusted reaction to Bossk’s sharp toes hanging above him on the Executor was actor Ken Colley’s natural reaction and was not in the script. The disgust was based on the immorality of the creature, not so much his look.

3. They weren’t really in the cantina.

While we’re on the subject of recycling, I have to point out a common misconception. You may think you’ve seen a Trandoshan lounging at the bar at Mos Eisley, but despite the similar look of the Saurin species, we technically can’t call that a Trandoshan. However, if we really want to push our nerd glasses up, the same mask was used in The Empire Strikes Back for Bossk but with some minor adjustments. A new paint job, new eyes, and different arms, hands, and legs were added to the alien to make him a distinctively different species. Though Trandoshans and Saurins are not exactly the same, the two are most likely distant relatives. Take a look at their hands for an easy distinguisher. Saurins have humanoid hands and Trandoshans have claw-like appendages with three or four digits. The Saurins didn't always have their name, however. While filming in the cantina, everyone referred to the reptiles as "crocs," "crockers," or "Gila-men."

4. They have bad relations with the Wookiees.

The only thing more terrifying than an angry Wookiee or Trandoshan on their own is pitting the two against each other. The walking carpets are not exactly fond of the lanky reptilians, mainly because they share a system and the Trandoshans make it a sport to kill Wookiees for the fun of it. Take a look at the Trandoshan hunting lodge in the Star Wars: The Clone Wars episode "Padawan Lost." The building is adorned with numerous Wookiee pelts showing off just how many of Chewbacca's people have died at the hand of the scaly snipers. Though the Trandoshans are equal-opportunity assassins: You can also see the heads of rancors, stuffed narglatches, Ithorians, and even Gungans. If you're not familiar with all of these names, let's just say slaying some of these behemoths would be a mighty impressive feat.

Fun fact #2: In the Star Wars: The Force Unleashed video game, killing 200 Wookiees will get you the “Bossk” achievement in the prologue level on Kashyyyk. 5. They have a moon just for hunting.

Trandoshans aren't only known for destroying Wookiees. The species will pretty much track down and kill anything and everything, and they have a specific location dedicated solely to the art of the hunt. A moon that orbits the planet Trandosha located in the Kashyyyk system goes by the name of Wasskah, and it is the ultimate Trandoshan playpen. Helpless, sentient beings are kidnapped from all around the galaxy and dropped onto the moon so the scaly menaces can perfect their stalking skills. The Padawan Ahsoka Tano herself was kidnapped on Felucia and brought to the jungles of Wasskah to join several other young captives.

Trandoshans get a pretty prominent feature in The Clone Wars, and executive producer Dave Filoni put a lot of thought into how he could diversify the species. We’re all familiar with Bossk’s tall, spindly build, but Filoni wanted the Trandoshans to vary just like humans. With the droid and arms dealer and smuggler Gha Nachkt, we saw a smelly, untidy, slightly overweight Trandoshan who, as Filoni explains, isn’t at the prime of his life. In Star Wars Rebels, the Mining Guild worker and crawler captain Seevor also has a non-traditional look. He’s on the smaller side of the Trandoshan scale, and has brown-hued skin with orange markings. Seevor’s family has been in the Mining Guild for years, adding another less-violent profession to the list of Trandoshan trades. 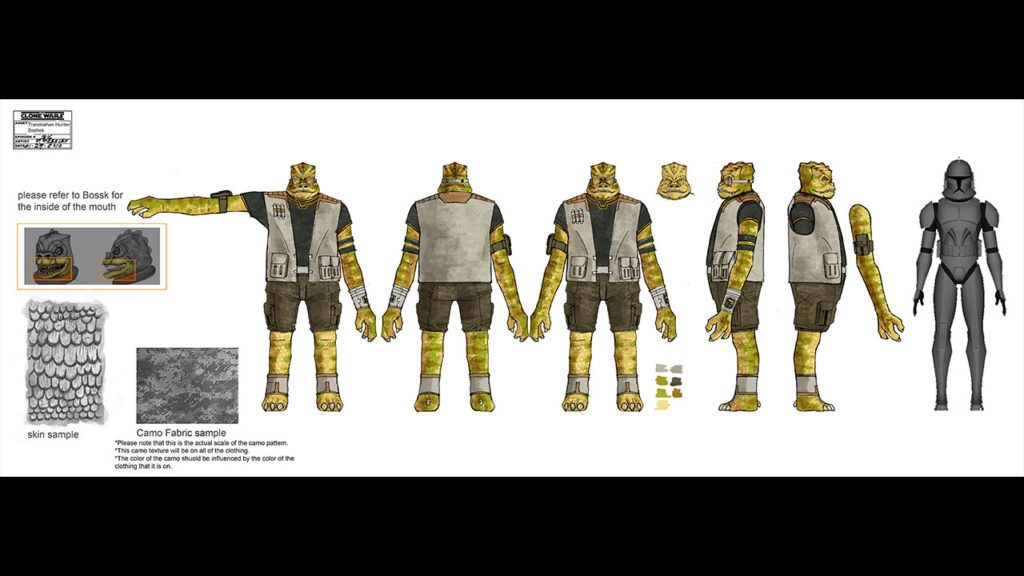 7. One Trandoshan was inspired by a cult classic.

Among the gang of Trandoshans introduced in The Clone Wars, one of the most unique goes by the name of Sochek. At first glance you may not recognize the resemblance, but his look was based on a fan favorite character from a well-known late '90s comedy. With snazzy amber-tinted goggles and cargo shorts, Sochek was actually based on John Goodman’s character Walter Sobchak from The Big Lebowski. In true Trandoshan fashion, Sochek ends up killing the captive Terrelian Jango Jumper Lika, but ultimately couldn't escape the blaster of a Wookiee.

Anything else you can share about these beasts? Let me know what I missed in the comments below!

Bossk (Star Wars) trandoshans Much to Learn You Still Have SWS