Lucasfilm Looks Back at 20 Years of Star Wars Celebration

Remembering our favorite moments -- behind the scenes and on stage.

When Lucasfilm launched Star Wars Celebration in 1999, it was not a sure thing. "I helped plan the first Celebration, which took place under leaky tents during a once-in-50-years rainstorm in the outskirts of Denver," says Steve Sansweet, formerly of Lucasfilm, now chairman and president of Rancho Obi-Wan, a nonprofit museum that houses the world's largest collection of Star Wars memorabilia. "Despite the weather and inconveniences, more than 12,000 Star Wars fans shared a palpable sense of community and demanded a repeat." From those rainy beginnings grew a Star Wars tradition: Celebration is celebrating its 20th anniversary this year, and Star Wars Celebration Chicago arrives tomorrow.

To honor 20 years of Star Wars Celebration -- and working to put it together -- StarWars.com asked various Lucasfilm employees to share their own Celebration memories, from behind-the-scenes stories to their own favorite personal moments.

"My favorite Celebration memory was working with our incredible student volunteers in London in 2016. ILMxLAB brought virtual reality to the event for the first time, and we set up a completely massive booth which demoed Trials on Tatooine, our first ever virtual reality experiment. It was a lot of work, and when we were preparing in San Francisco, we quickly realized we needed a solid crew of ambassadors to run the demo stations for the event. We were able to get over 70 student volunteers in the London area to help showcase the experience, and needless to say, they were truly amazing. Their passion and enthusiasm for the event and fans was palpable, and something that I won't forget. You can see some of them with the ILMxLAB team (plus a Sam Witwer photobomb!) in this photo."

"I'll never forget my first Star Wars Celebration. Every day at Lucasfilm you work tirelessly, without pause to help make Star Wars great, and in my case, Star Wars games the very best they can be. It's an incredible job that I feel lucky to have. But day-to-day sometimes you forget about how what we do impacts so many people in such positive and profound ways. When we announced Star Wars Battlefront II, I was floored as fans screamed, even cried as our trailer was shown for the very first time."

"Back in 2015, I was part of the StarWars.com team helping to run the first ever Star Wars Celebration live stream. Those streams are A LOT of work and it couldn't be done without a team which includes some members of the fan community. Shortly after the event closed for the night, I was talking to one of our fan team members and he mentioned that he'd been working his butt off so hard for us that he missed the one panel he'd hoped to see: the Rebels Season Two panel. He still hadn't even seen the trailer that premiered in the panel, so we rushed upstairs into our show office and I pulled up the video on my computer so he could get a private screening. Being there to witness his reaction to that trailer (especially when Rex's voice is first heard) will probably always be a highlight for me in my career here."

"My my most memorable moment was at Celebration Anaheim in 2015: The Golden Gate Garrison and Dave Filoni inducted me into the 501st. It was a complete surprise. I had just wrapped a panel called the 'The Women of Animation,' where Filoni was the moderator, and I was honored to share the stage with some pretty amazing female leaders of Lucasfilm. As the panel wrapped, we all walked off stage and slowly made it into a room where I suddenly became dumbfounded. There were clone troopers, stormtroopers, Imperials, TIE fighter pilots, the Perales family dressed as the Rebels main characters, R2-D2. I just figured I had walked into an area where cosplayers were taking photos with each other, but then Filoni walks up to them and suddenly I'm presented with a beautiful plaque and name tag. Filoni, along with some 501st friends of mine, Elton Hom, John Schlosser, Jon Farmer, and Kathy KayDee, all said really nice things, and it just warmed my heart that day. I have always felt like Filoni's Padawan and to receive this from my Jedi Master was truly unforgettable."

"Mark [Hamill] wanted to do a piece on the StarWars.com stage at the end of one of the days -- just a sort of off-the-cuff, talk to the crowd type thing -- which we obviously wanted to make happen. But it was getting late, his line was still long for autographs, and the doors were closing soon. It was getting really stressful as the crowd at the StarWars.com stage knew we weren't leaving, so they knew something was going to happen. And Mark was one of the last few people still signing, so people were putting two and two together and swarming around our area.

When his line was almost done, I went over to the booth and waited in the back room for him to finish. He walks in and asks me, 'What's the plan?', to which I realized I didn't really have a plan to get him discreetly to our stage from where we were -- there were lots of fans in between. But there was a long side route we could go, if we could just get past the first group without them seeing him and knowing where we were going.

So my plan, that I came up with while staring at a curious Luke Skywalker, was to give him my Star Wars Show hoodie to cover up. He put it on and I just had to take a picture -- to which he paused with the hood just over his head like a Jedi robe. It was perfect. 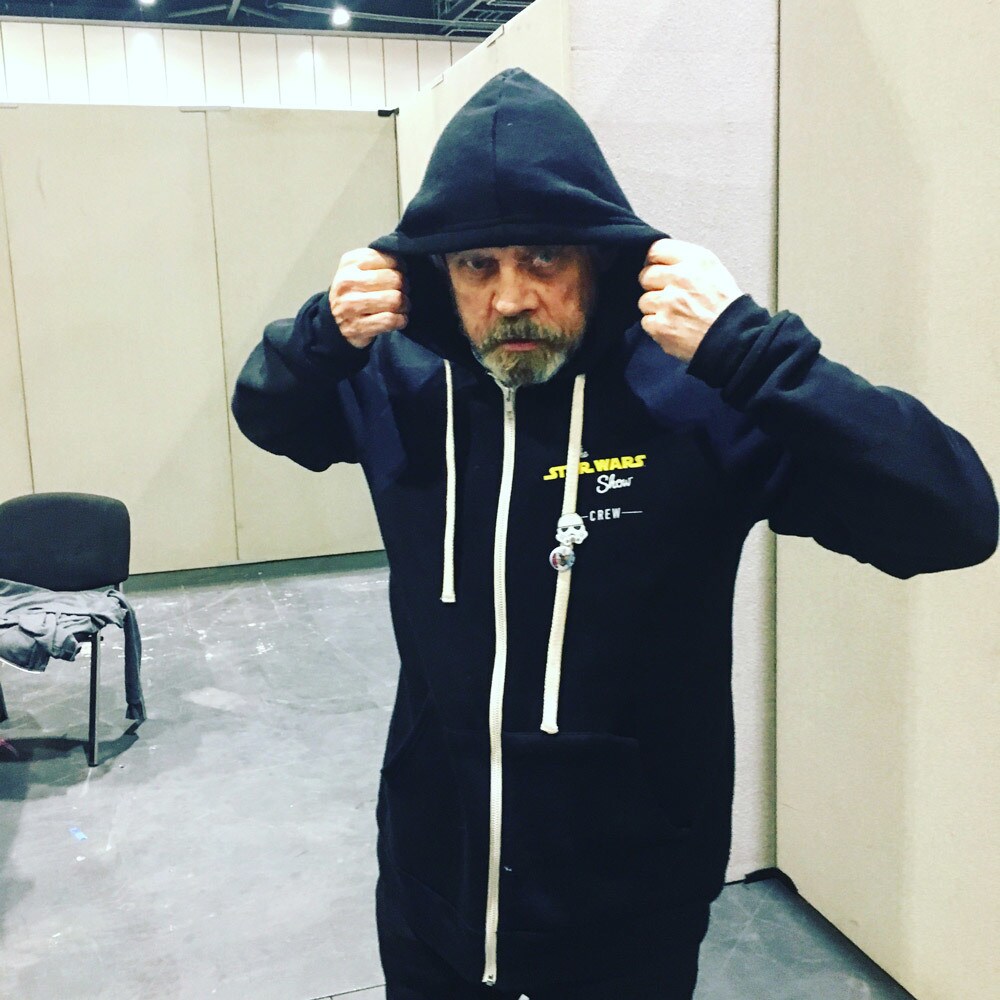 With his face completely covered by the hood, we did the walk around empty signing cubes and turned the corner to our stage. He walked up the back steps just as people started to catch on, and he surprised the hosts and everyone -- in a way only Mark can.

I reluctantly did wash that hoodie. Eventually." 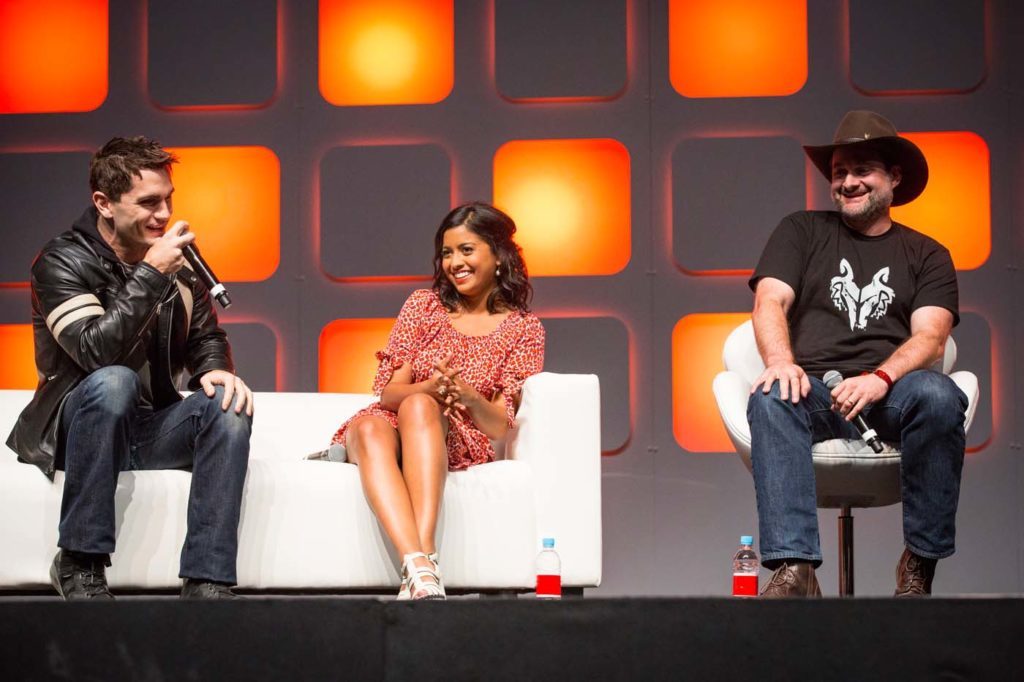 "Celebration London was a great event for me. It was my first event working as a Lucasfilm employee and definitely the most memorable. I was only able to attend one panel, and I chose to attend the Rebels panel, because I knew the Thrawn reveal was coming and I was so psyched to see everyone's reactions. It ended up being even louder than I could have imaged when Lars Mikkelsen started his monologue and the camera slowly zoomed into Thrawn at his desk. I will never forget how amazing it was to experience that moment with fans. I am so excited to share many more with fans at Chicago this year." 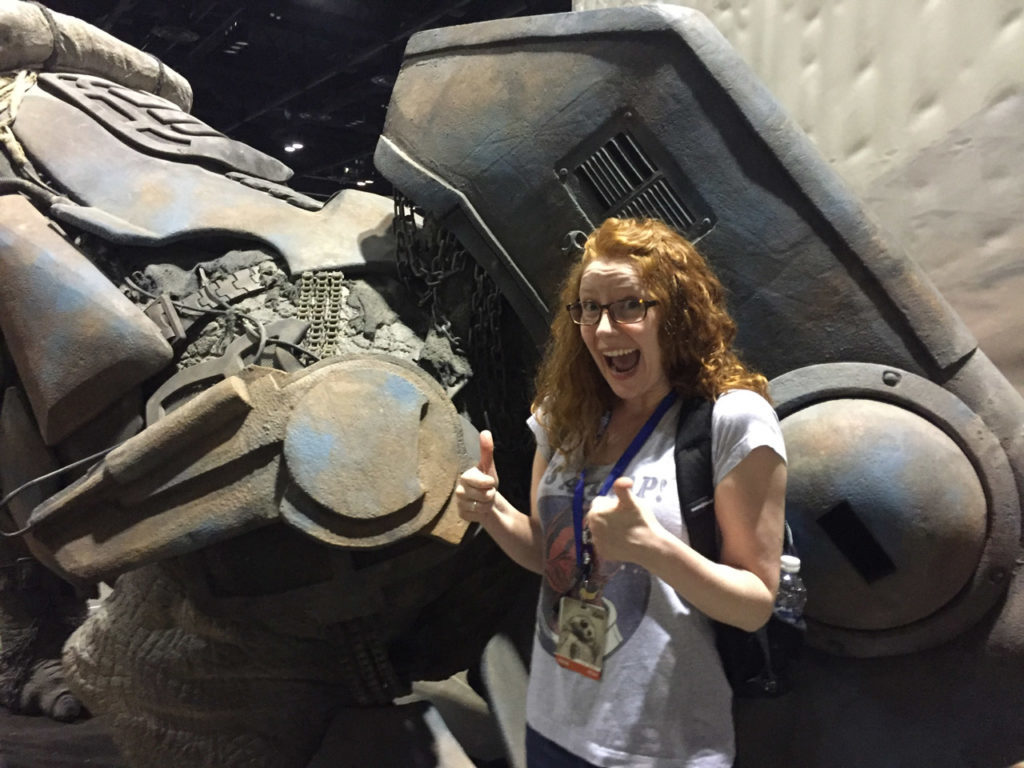 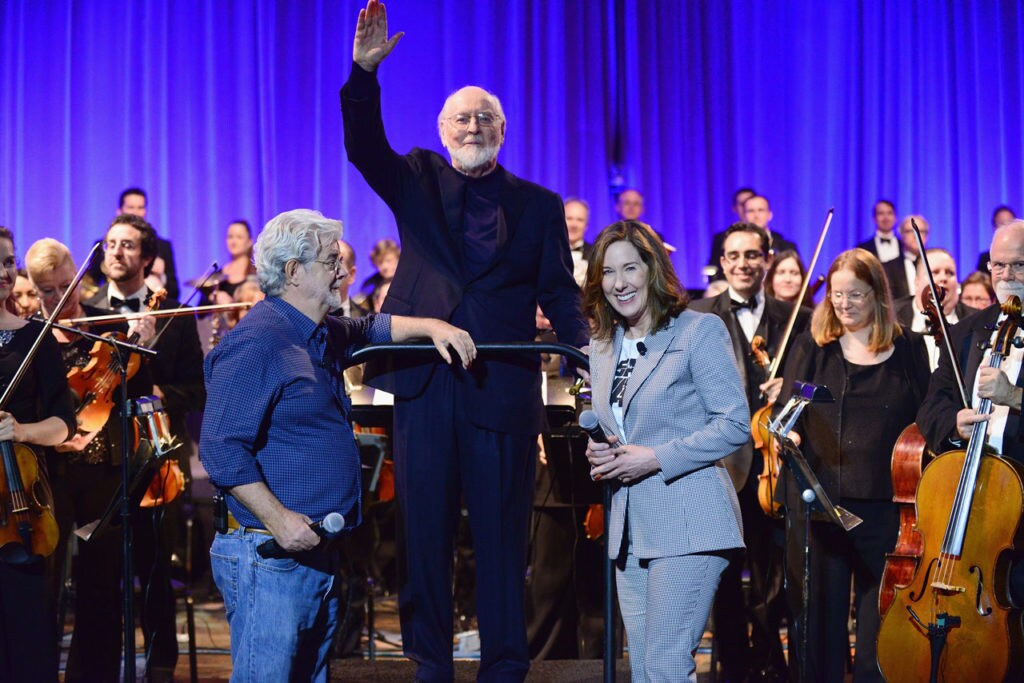 "Star Wars Celebration Orlando was my first Celebration and the 40th anniversary panel was my first stop. I couldn't believe my good fortune that I was in the room with George Lucas, Mark Hamill, Harrison Ford, and so many other amazing Star Wars legends, the people responsible for my enduring love of the saga and its characters. But there's something visceral about the music. When the live orchestra chimed in, hidden from view, I started to tear up. When the curtain was pulled back to reveal John Williams himself conducting? I knew I would never forget that day." 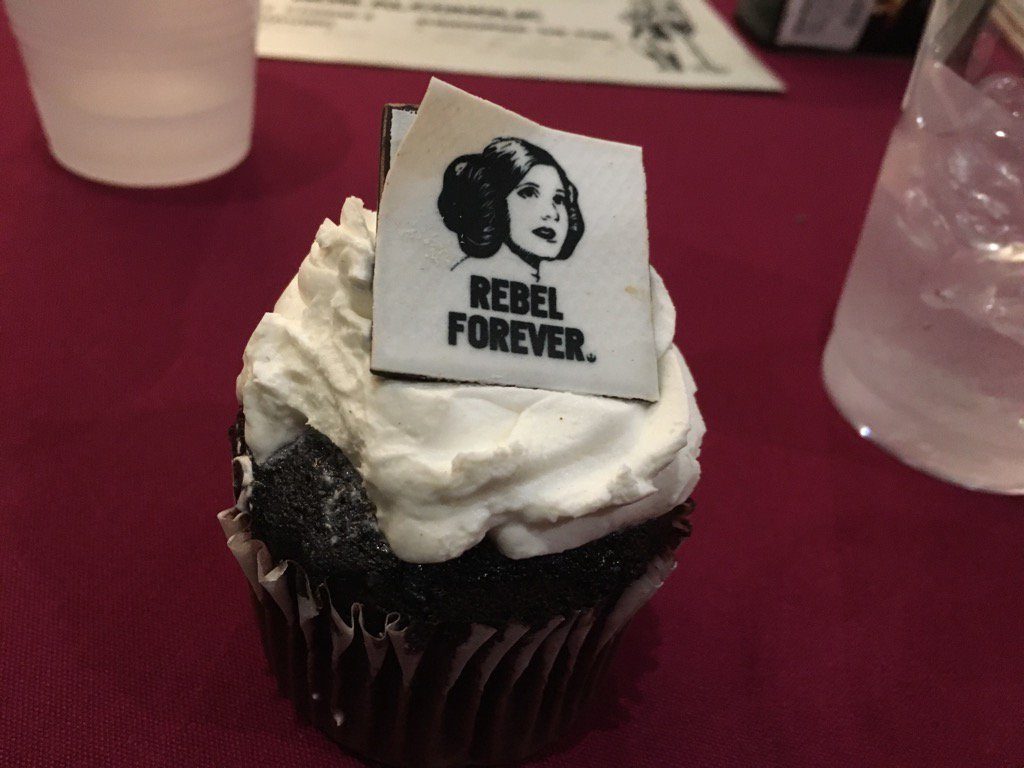 "Star Wars Celebration Orlando in 2017 took place just a few months after Carrie Fisher passed away. A group of fans were holding a charity fundraising memorial there in her honor, and kindly invited me and a few authors to join them. We held an impromptu panel where the authors and I discussed some of our favorite representations of Leia in publishing and what both Leia and Carrie meant to us. I think the only time my voice wavered was when I promised everyone there that I would do whatever I could to protect and cherish the legacy of Leia in publishing. The event ultimately turned into a forum for people to share their own encounters with and memories of Carrie, with some tears but much more laughter, which I think is what she would have wanted. Being able to be in that place at that time surrounded by people whose lives had been affected by Carrie Fisher and Princess Leia just as much as mine had is something I will never forget."

"Ian McDiarmid reading from The Jedi Doth Return at Star Wars Celebration Anaheim will forever be one of my most treasured Celebration memories. To be present as my favorite Star Wars character came to life in a once-in-a-lifetime command performance was, if you'll pardon the pun, electrifying."

"I have so many incredible memories of Celebration, it's hard to narrow it down. In 1999, we were getting ready for our first Celebration in Denver, Colorado, when the Columbine high school shootings happened. We, of course, immediately said we would cancel the event -- we couldn’t imagine moving forward when we, like the rest of the country, were grieving with the students who had lived through the unimaginable. But then we received a call from the mayor of Denver. He pleaded with us to reconsider, and said the town needed something to lift their spirits now more than ever. He said that Star Wars could be something that the town could rally around. So we moved forward with the event, and the reception we received from fans was incredible. It was pouring rain, but it didn’t put a damper on their enthusiasm. The fans stood outside the tents -- we had not yet moved onto convention centers, as we later would -- with their umbrellas and gave us the biggest welcome you could imagine. It was the beginning of something really special. It’s hard to believe that we are now celebrating our 20th anniversary. As Celebrations increased in size and scope, we moved out of the tents and onto the big stage. One of my favorite guest hosts was Jon Stewart. I knew he was a fan, but we discovered that his knowledge of Star Wars was off the charts. He’s the real deal and the fans knew instinctively that he was in their tribe. His interview with George [Lucas] was fantastic, and spending time with him and his lovely family touring the floor was certainly a highlight for me.

And, of course, I have to mention the panel celebrating the 40th anniversary of Star Wars. Having worked with George and all the actors throughout my career, it was such a treat to see everyone again. When John Williams played Leia’s theme, it brought tears to my eyes. It was an incredible moment."

Special thanks to Steve Sansweet. If you're going to Star Wars Celebration Chicago, see an exhibit of two decades worth of Celebrations at the Rancho Obi-Wan Experience (booth #5516).