SWCC 2019: 6 Surprises from Inside the Mos Eisley Cantina

Mos Eisley cantina expert/effects artist/Regal Robot founder Tom Spina returned to Star Wars Celebration for another installment of his in-depth cantina history panels. “The cool thing about Star Wars is that there’s always more to discover,” Spina explained. He joined stage host Amy Ratcliffe to unveil some rare trivia and even add a small (but important!) addition to the Star Wars lexicon. 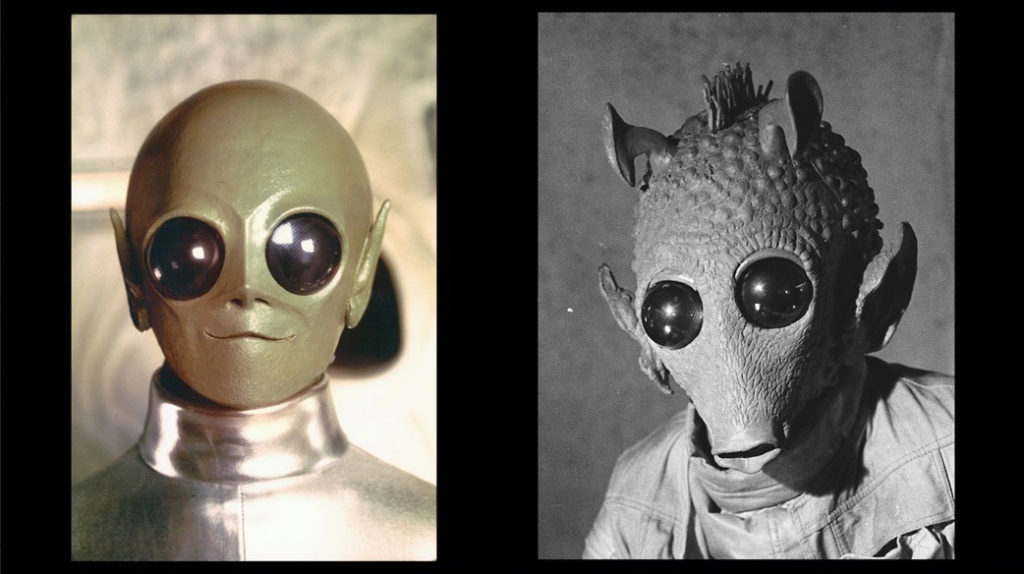 1. Greedo’s alter ego. The most famous Rodian of them all began his life in a slightly different form. That’s Greedo on the left in his earliest form appearing in an advertisement for Birds Eye Peas in the United Kingdom. Makeup artist Stuart Freeborn and his team created this “pea-pod alien” for that commercial production, and recycled the character’s shell and eyes for their later work on Star Wars, adding skin (warts and all) and antennae. Sadly, this commercial has yet to be discovered. 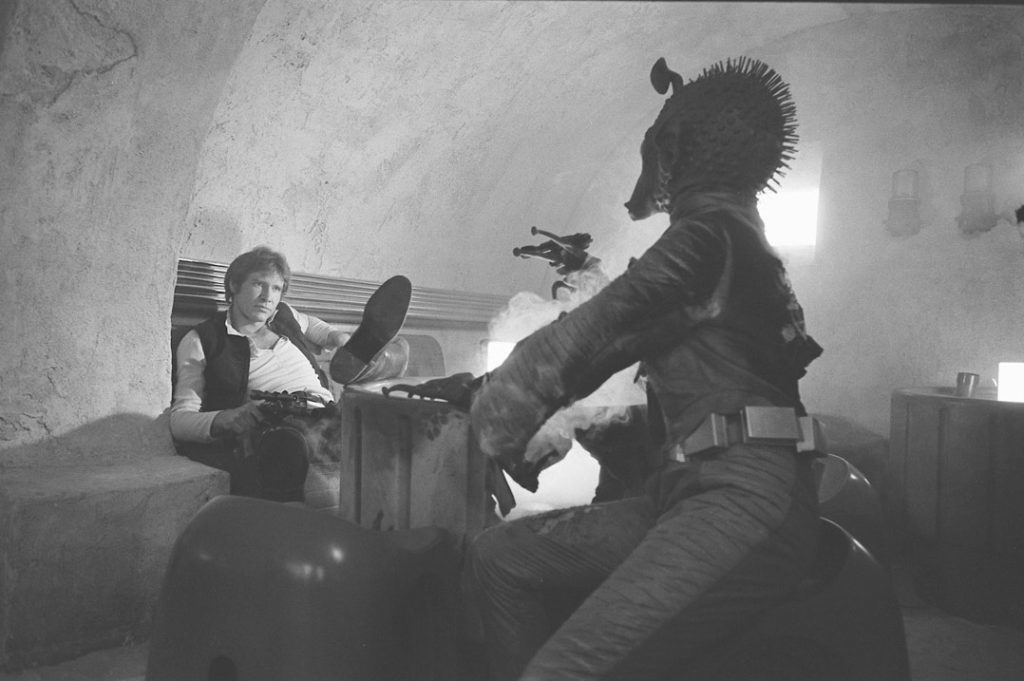 2. Han shot through… Of course, poor Greedo’s fate is known well to us all. But perhaps we’ve been so preoccupied with the order of fire in that fateful confrontation that we’ve missed the fact that Han Solo actually shoots Greedo straight through the table. A stunt dummy was used for the close-up of the blaster explosion portraying Greedo’s untimely end.

3. “Not Usual Looking People.” Meet Ted Burnett. You might know him as Wuher, or simply the bartender of the cantina, with a particular distaste for droids. Burnett was recruited from the so-called “Ugly Agency” in the United Kingdom. The cantina’s unusual denizens weren’t limited to alien species. The actor himself later made his way into a 1985 music video by Godly and Creme.

As an aside, Spina also mentioned that the bartender himself sports an upside keyboard behind the bar! Perhaps for inputting recipes?

4. Not everyone wore a mask. Ted Burnett wasn’t the only unusual actor hired to populate the cantina. The late Salo Gardner was another human extra roaming the background. Spina uncovered Gardner’s talent file where Stuart Freeborn scribbled a note to remember his conspicuous ears. Gardner returned to the galaxy far, far away playing Trinto Duaba in Star Wars: The Force Awakens, another cantina patron that Garnder was sometimes confused for playing in the original film. 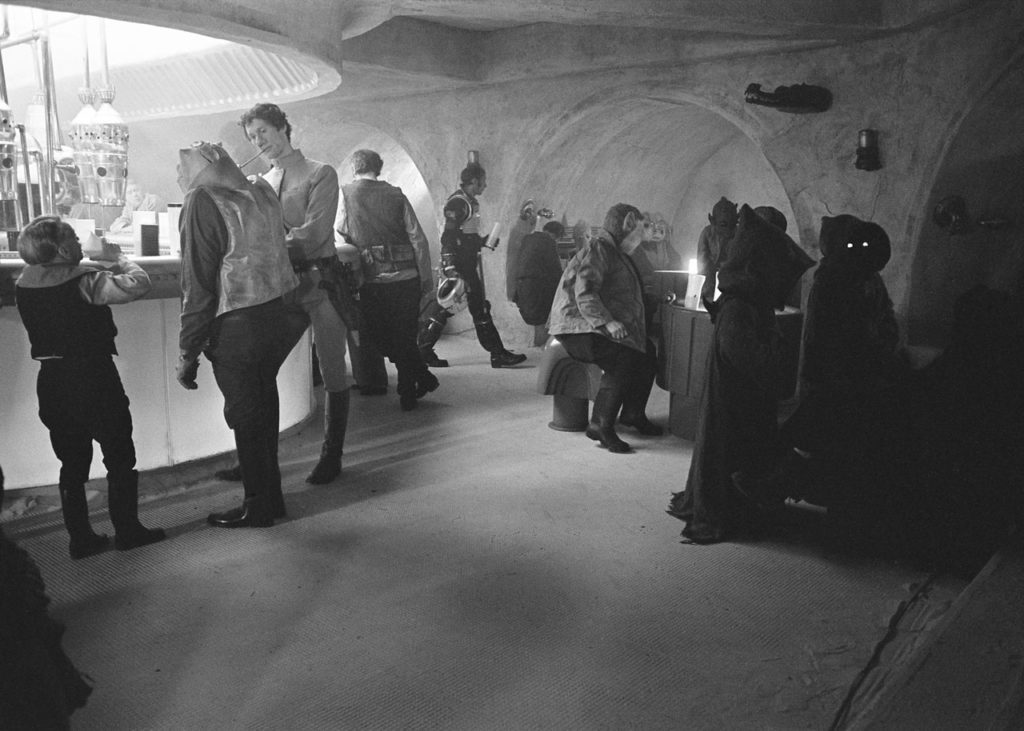 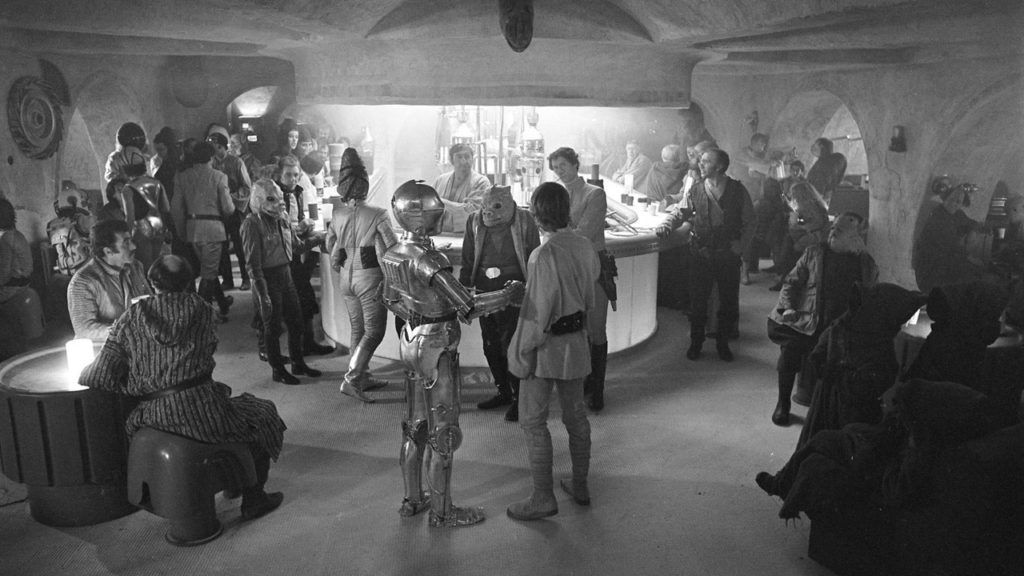 5. Is that a crocodile? No you’re not seeing things. Apparently, the cantina proprietors collected trophies from our own planet. That’s a gharial, or fish-eating crocodile, which inhabit India. And there it is in Star Wars. But it doesn’t end there. The cantina’s walls also sported a sort of large cat skull along with a mysterious decoration whose own identity has eluded Spina. He seems to think it’s a fish, or “space fish,” if you will.

6. A new addition to the Star Wars galaxy. The Gotal species -- sometimes known simply as “goats” -- are well known to many fans even beyond the cantina sequence. In a rare production photograph, Spina uncovered a Gotal character that had never been separately identified. It was decided that this alien would be named in tribute to a lucky fan in attendance at the panel.

Leland Chee -- Lucasfilm’s Keeper of the Holocron -- made a special appearance to craft an original name inspired by the fan’s name. That winner turned out to be Kenneth Haynie, a name which Chee quickly morphed into the one and only “Hennet Kayn,” now officially recognized as a denizen of the Mos Eisley cantina. Welcome to the galaxy far, far away, Hennet Kayn!