The talents behind today's Star Wars games share memories and moments that continue to inspire.

In celebration of National Video Games Day, StarWars.com asked members of the Lucasfilm Games Team to name their favorite Star Wars games and gaming moments, from any era, any console, or any emerging form. The responses are proof that those who work on Star Wars video games are fans just as much as any of us, with titles old and new inspiring their careers and lives. 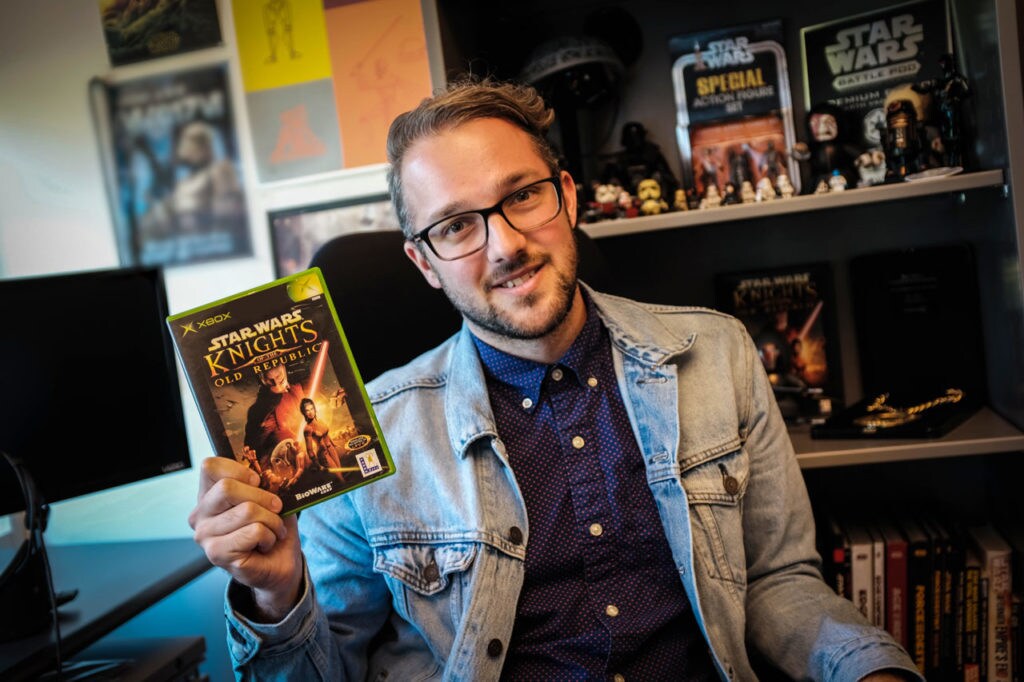 Fulfilling your destiny in Star Wars: Knights of the Old Republic (2003).

"When I first played Knights of the Old Republic in 2003, I took an open approach to the many moral choices the game presents, never fully committing to the dark or the light. However, [spoiler alert] after the shocking revelation onboard the Leviathan that I was in fact Darth Revan, that all changed.

In KotOR, after players learn the truth, there is always one more Star Map to collect. While on this final planet, unique dialog options are available which refer back to the player’s past as Revan.

For me, that final planet was Korriban; fully embracing the dark side on the Sith homeworld, raiding the tombs of dead Sith Lords, declaring my true identity as Darth Revan to all the pretentious Sith academy students, and demanding Master Uthar bow before his true Dark Lord.

No other moment in any Star Wars game has brought me such pure joy. If you are a fan of KotOR and Darth Revan, you owe it to yourself to experience Korriban as Darth Revan at least once." 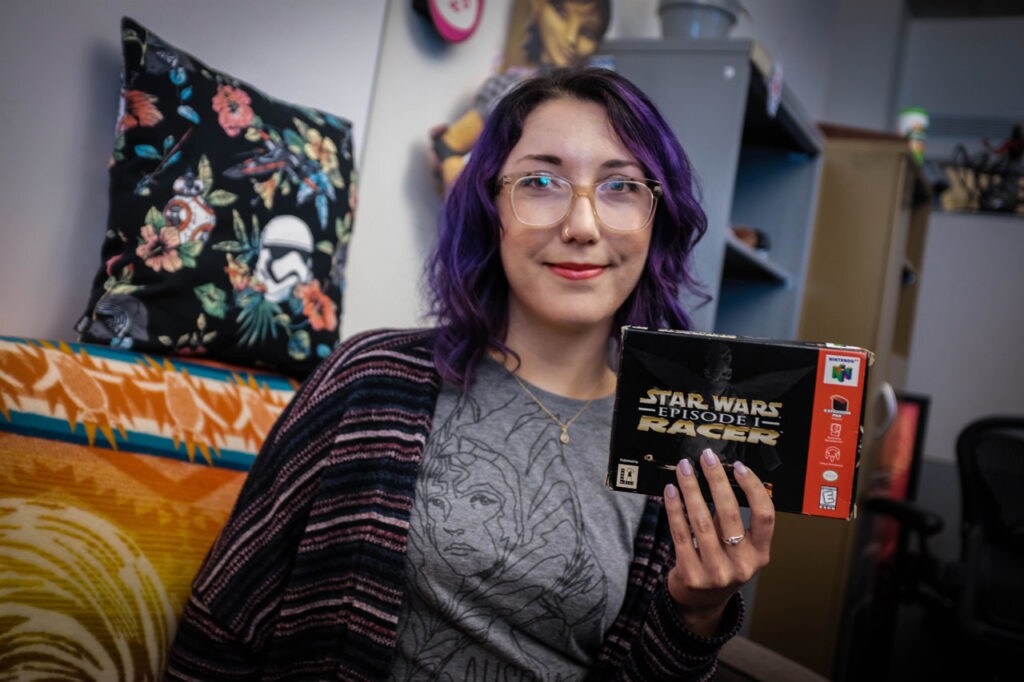 "My favorite Star Wars game is Star Wars Episode I: Racer, particularly the Nintendo 64 version. I remember clearly forcing my friends to play Racer with me. I loved visiting all the planets, and racing games are still some of my favorites to this day.

My favorite course in the game was Ando Prime, which was a snowy planet I knew nothing about. However, it just felt so different than the other courses and I was always trying to beat my previous time. There's a shortcut near the beginning that I was always going for and would surprise my friends with. That's fair play, right?" Stepping into the cockpit in Star Wars: Rogue Squadron (1998).

"When I was around 10 years old, my dad built a PC for our family and among the first games we got was Star Wars: Rogue Squadron, along with a brand new joystick. I'd never experienced anything like it. I still remember the excitement of flying a Star Wars starship through a large dusty canyon. I also remember slamming into the canyon walls every 10 seconds or so...but it somehow never took away from the thrill of flying on another planet in another galaxy far, far away." "My favorite Star Wars gaming moment has to be the entire Cult Sighting mission in the Star Wars Jedi Knight: Jedi Academy game. When this game came out in 2003, it had some of the best lightsaber combat in any Star Wars game up to that point. And this entire mission involved exploring this really cool-looking underground cave where you had to fight off all of the lightsaber-wielding dark side cult members, lest they siphon off all of the Force energy from the tomb of a Jedi Knight at the bottom!" 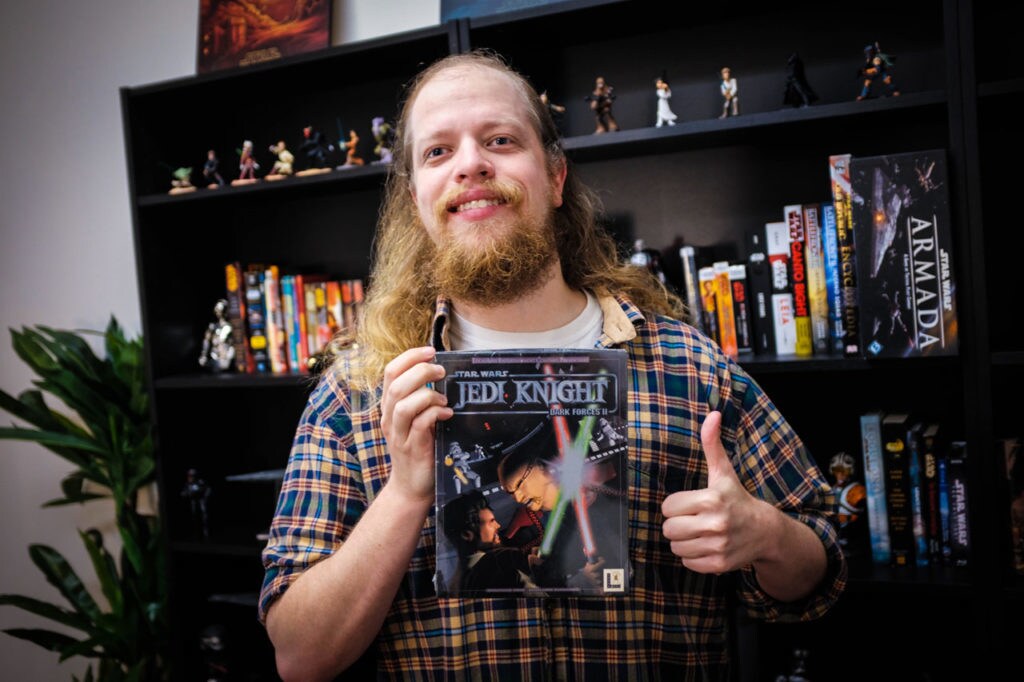 "Star Wars Jedi Knight: Dark Forces II had everything you want in a Star Wars game: innovative gameplay, authentic sounds and music, meaningful player choice, and storytelling that added depth to its level design (and crazy boss encounters), especially relative to most games at the time.

Kyle Katarn's mission to track down his father's killer starts out as a personal journey -- but the stakes quickly become epic when you realize Jerec, the man responsible, is a maniac looking to reforge the Empire. The first time I faced one of Jerec's Dark Jedi in battle, I couldn't believe I was actually having a real-time lightsaber battle in glorious 3D, and that I was going to have to further connect with the Force to take on the rest of his army. By the end of the game, I had gone from gunslinger to Jedi and felt more than ready to save the galaxy." The immersion of Star Wars: Secrets of the Empire (2018).

"My favorite Star Wars gaming moment is something that goes beyond a traditional game to instead being an interactive story -- Star Wars: Secrets of the Empire by ILMxLAB and The VOID.

The experience itself represents a profound moment in Star Wars where all of your fantasies of being fully immersed in the Star Wars universe are the most tangible and visceral. My favorite moment in particular was picking up a blaster as the alarm went off. I was actually a rebel spy infiltrating Mustafar disguised as an Imperial stormtrooper, and my friends and I ran across a truly infamous character that would make any Star Wars fan's day." 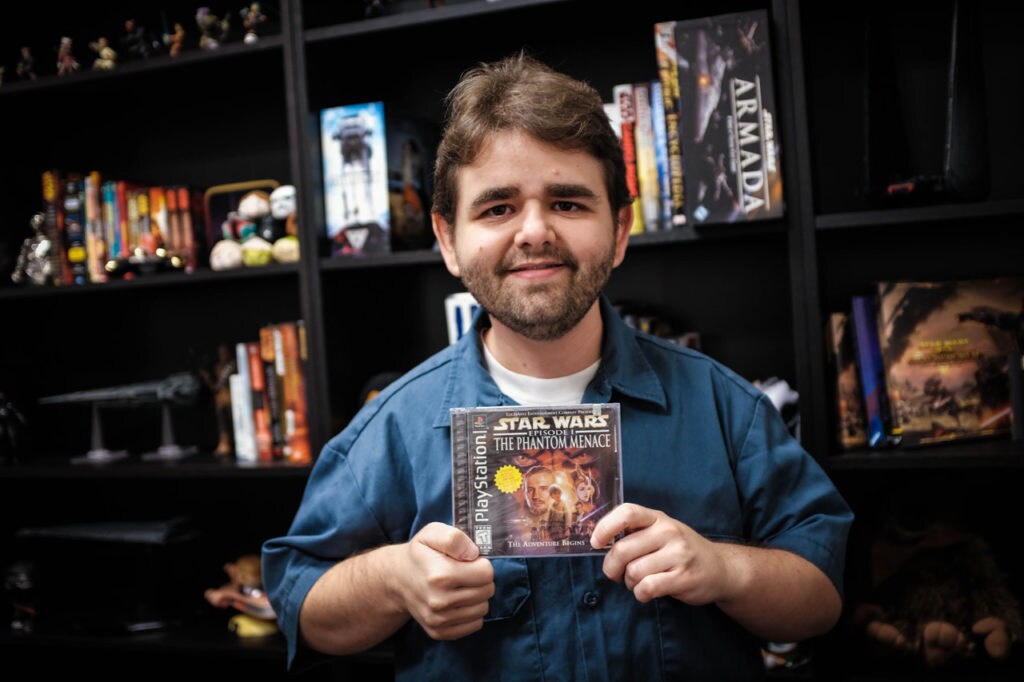 "I'm going to be 'weird' and say my favorite Star Wars gaming moment was exploring Mos Espa as Qui-Gon in the Star Wars: Episode I - The Phantom Menace game. I was going through a Monty Python phase then and the Episode I game had a charm to it that particularly resonated with me.

Not to mention, as a 12-year-old, I was still very much infatuated with everything Episode I, as the movie had just been released earlier that year.

Exploring Mos Espa was different from the rest of the levels in the game, since it gave players a chance to explore or even do ill-will against the citizens. I hadn’t played too many games with sandbox elements at that point in my gaming career, so the experience was somewhat unique to me." "My favorite Star Wars gaming moment comes from the Star Wars: Obi-Wan game that came out for Xbox in 2001. Obi-Wan is my favorite character and the lightsaber combat/Force abilities in that game felt so unique and were something I had not experienced previously in a Star Wars game. In particular, fighting my way through the Separatist forces in Theed, and confronting Darth Maul set to 'Duel of the Fates' is something that has always stuck with me." "My pick goes to Star Wars Battlefront II and the moment you get to step into the shoes of the 'bad guy,' or rather, woman, and become an Imperial soldier in Iden Versio. I know, I know -- SPOILER ALERT: she defects to the Rebellion in the campaign. BUT, being able to play from the perspective of the Empire, even for a bit, during such a pivotal point in the Star Wars timeline, is a dream come true for a dark side devotee like me. I love that you are able to experience this new story through the eyes of a female lead. And 'The Dauntless Mission' in particular is such a thrill -- taking out rebel ships, navigating the rebel cruiser, and destroying the ion cannons -- it can definitely make your pulse race." "My favorite classic Star Wars game, hands down, was Star Wars: Republic Commando. Its gameplay experience holds up even by today's standards. That's because it has the right mix of design elements that I value the most in a really great game. The art direction wields a more mature and gritty aesthetic for the Star Wars franchise. The look and feel immediately pulled me in to the experience while surprising me with an emotionally gripping story line, complete with a gut-wrenching twist.

Republic Commando really made me feel something, while over-delivering on tried and true FPS mechanics that fans of the time came to expect. It didn't stop there, however, but rather took it a step further by layering in a core-strategic component of gameplay in the way players leveraged the unique skills of their squad mates to get out of sticky situations in battle. The Squad truly became your weapon on the battlefield. It was a step forward for the genre at the time unlike anything I had ever seen." Feeling like you're inside Star Wars in Star Wars Galaxies: An Empire Divided (2003).

"Star Wars Galaxies: An Empire Divided is in a special place for me. It was the game that allowed me to really live in the Star Wars universe. It is difficult to pick a special moment from it, but the one that sticks out is the first time I entered the game. I had been following the game and was there to log in on day one. I built my character, over many hours, and was dropped into Tatooine. The game was amazing -- seeing all the other player's characters running around, talking, fighting, buying, and selling. It really felt like I was in Star Wars. My first quest went as well as everyone would think. I picked a quest for which I was not strong enough, was defeated multiple times, and limped back to town. But even that was awesome. I walked into the local cantina to cure my fatigue and when I entered, it was like entering a cantina from the movies. The place was packed with players of all types. Humans, aliens, hidden rebels, overt Imperials, bounty hunters, musicians, and dancers. I stood in awe. I played Galaxies for almost the entire life of the game. And after joining LucasArts, I was able to live my dream of working on the game during its final years."

What are your favorite Star Wars games and gaming moments? Let us know in the comments below!