Kieron Gillen Chats About the Past, Present, and Future of Marvel’s Star Wars

StarWars.com talks with writer Kieron Gillen about taking Han, Luke, and Leia from the ashes of Jedha to Mon Cala.

Kieron Gillen and Salvador Larocca have taken readers of Marvel’s Star Wars back to Jedha in their first story arc, and now to the strange surface of Mon Cala in the current story in the ongoing series. Gillen is a master at blending unfamiliar story elements like new settings and characters with the familiar faces and locales of Star Wars without ever losing the feeling that you’re still in the galaxy far, far away. And "Mutiny at Mon Cala" exemplifies this.

StarWars.com caught up with Gillen to talk about "Mutiny at Mon Cala," heroes and villains, and how his current Star Wars story connects with Marvel's Darth Vader series. StarWars.com: We haven’t seen a lot of the surface of Mon Cala before. Where do you look for inspiration when you’re creating a setting we don’t know too much about yet?

Kieron Gillen: The thing about Mon Cala is, in some ways, Tatooine is the definitive desert world in the Star Wars universe, so I liken Mon Cala as the water world… We’ve seen underwater, we’ve seen the complications with the Quarren and its own history, so what’s the surface like?

Thinking about the Pacific Ocean, there are coral reefs and just tiny bits of stuff above the surface. And that’s kind of what my inspiration was for it.

I think, like many people, I was watching Blue Planet II over Christmas, as well. All this stuff was like, yes, "I'll have that, have that, have that." [Laughs] I could have done an entire 50-issue series based around random cool stuff like Ackbar at the bottom of the ocean, fighting various sea creatures. That would make me very happy. 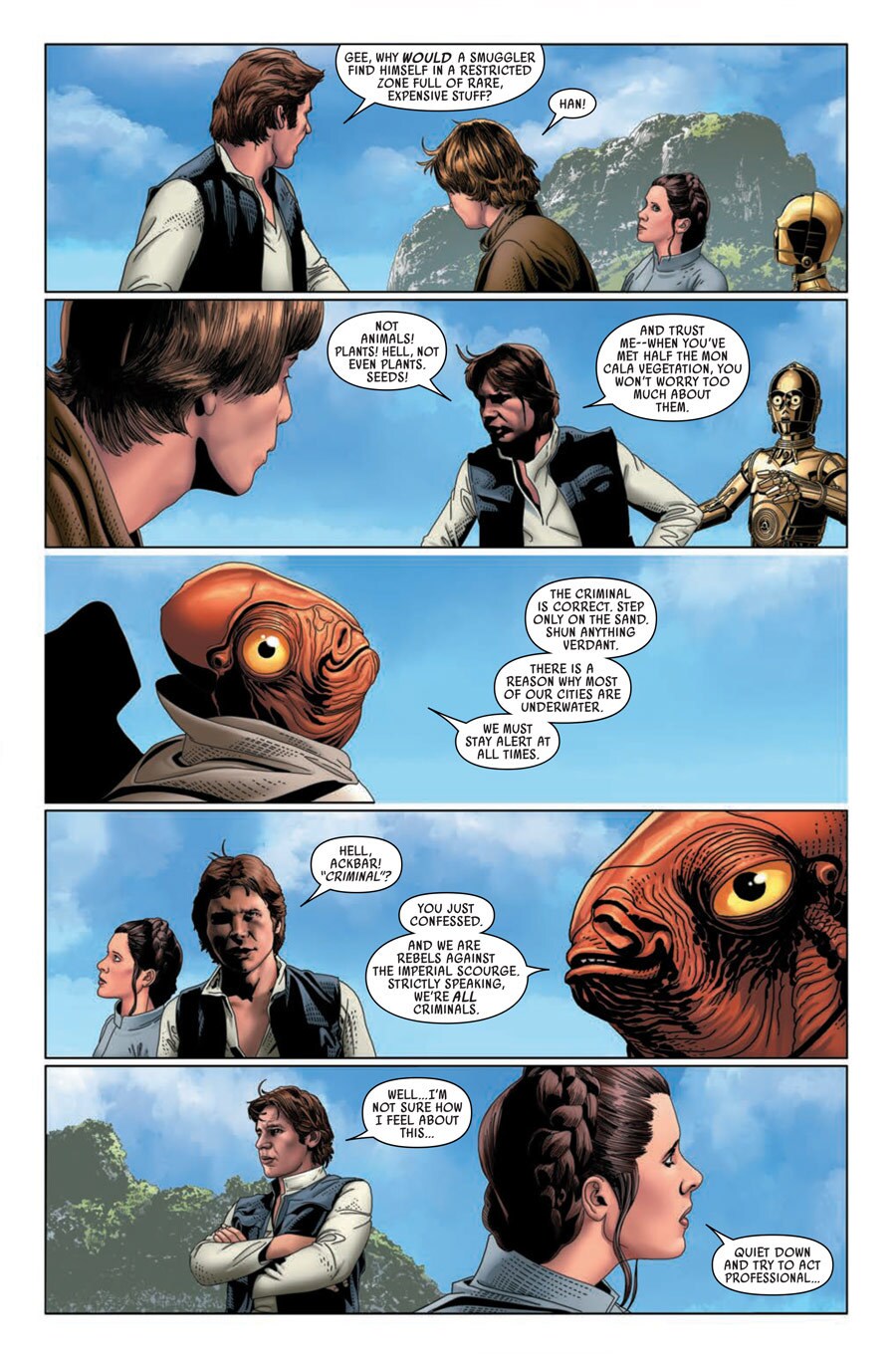 StarWars.com: A lot of your stories are focused on the point of view of a villain or anti-hero in the Star Wars universe. Is that because we already know Luke, Leia, and Han’s stories so well?

Kieron Gillen: It’s a little bit because those are the jobs I get offered. [Laughs] I was phoned and asked, do you want to write Darth Vader? And, of course, Darth Vader led to Aphra. Aphra has “evil” leanings, let’s say, because she hung out with Darth Vader.

So part of me is like, "Oh, it’s just circumstance, but I think the reason I was offered Vader is [because] I write a lot of bad people. In my work for Marvel Comics, there is a tendency to try to write the villain. I have a Loki run people seem to like, I write a lot of dark books… Even the heroic figures tend to be pretty much conflicted.

There are definitely challenges, although Han’s finally easier, actually. The fact that Han’s a bit rough, like if you take Aphra but make Aphra nicer, you kind of get to Han.

But with Leia and Luke, Leia I get more, because she’s practical. The idealism of Luke is quite hard to write without making him dumb. Luke isn’t dumb; he’s just a little bit naïve at times. One of my favorite bits when thinking about Luke is in A New Hope when he says, “She’s rich.” [Laughs] He’s thinking, how can I manipulate this guy?

At the same time, I do write villains, like Commander Kanchar and Trios in the first ["Ashes of Jedha"] arc. And in this arc, as well, you get to see quite a lot about the villains…although I prefer “antagonists,” because you get someone like the Regent Urtya. He’s very much against the group, and so is the Empire, but he’s doing it solely for his own people. So he’s sympathetic, as well.

That’s what I look for. For me, heroes find themselves against the opposition, and if the opposition are just kind of like empty suits, it’s not a meaningful triumph. For me, drama is about hero as thesis, antagonist as counter-thesis, and the resultant conclusion being the Hegelian synthesis, to be pretentious for a few seconds.

StarWars.com: You mentioned you write heroes conflicted. Is Leia struggling with the question Urtya asked about Alderaan, that if she’d known what it would cost her, would she have still rebelled against the Empire?

Kieron Gillen: Yes, that’s one of the things I wanted to pose early. In the first arc, Jedha is obviously a weird echo for Leia. It’s almost like twin worlds, that’s kind of the imagery she used. And this is kind of like, “I’m picking it.”

It’s an interesting dovetail with Luke. The thread I’m working on with Luke is, "Yeah, a lot of people died for me." If you look at interesting character development that would have happened between A New Hope and The Empire Strikes Back, that’s certainly there. You don’t see much of it by the time you get to Empire, that stuff the characters must have faced and come to an answer -- at least a temporary answer, anyway.

In the case of Leia, I think that’s a good question to ask. The scary thing is, Leia, I’m almost certain, would think, "Yes, I definitely would do it," but at the same time, part of her must know that’s not true. What would she give up to have her father back, or even one more conversation? And that’s why Tunga’s act [at the end of issue #45] is so cruel. And of course Leia’s response is kind of telling. Not for a second is she fooled, she just gets angry.

If you ask a character a question, and even you’re not quite sure of the answer, that’s normally dramatically interesting. If I don’t know the way for sure it’s going to go, it definitely means the reader doesn’t. [Laughs]

StarWars.com: That actually brings me to a question I’ve had for a while. Because of the nature of Star Wars, we do have a basic idea of where it’s going to go. Does that make your job more challenging?

Kieron Gillen: It defines my job. It doesn’t make it harder or easier per se, but it defines what the job is. When I take on a piece of writing for something I don’t create from scratch, I ask, "What am I trying to do here?"

And in the case of Star Wars comics, these are period pieces almost, or historical novels. We know the start of the story, and we know the end, we know this bit of the history and this bit of history -- what is the logical thing that connects the two?

The story you can tell is limited by what surrounds it. Choose Darth Vader, for an example. Darth Vader survives a huge military disaster in A New Hope; he should be quite low. In The Empire Strikes Back, he’s in charge of incredible fleets, he’s much more powerful than he ever was in the first movie. So, in other words, he’d had to climb. He’s also discovered the last 20 years of his life have been a lie, because he’s got a son. These are the kind of big, meaty ideas, and whatever story I pitched was basically, "How can I tell that story as meaningfully as possible?"

With [Marvel’s] Star Wars, it’s the other way around. A New Hope was the high point with a big firework display and everything going pro-rebels. But when we catch up in The Empire Strikes Back, here’s the secret: The Empire’s already struck back. The Rebellion’s already been pushed really quite hard at this point. As the opening crawl says, they’ve been running over the galaxy for ages, pursued by Vader. Things have been going pretty bad.

Luke, Leia, and Han have all climbed the ranks for the last three years. Luke is just a guy that jumped into an X-wing at the last minute in A New Hope, and he’s a commander in Empire. There’s a story there. What I look for is, what’s the interesting story here, and then work out the best way to tell it.

I’m not the type to tell endless adventure stories; I’m someone who tries to tell a larger structure. So that’s what I was trying to do with the first arc, "Ashes of Jedha": Here are the characters and their struggle. The second arc is, "Here’s the Rebellion, this is their actual plan, building the Rebel Alliance. They’re trying to get ships, because they need ships, being quite practical." The Rebellion rises to pretty impressive heights by the end of this arc. 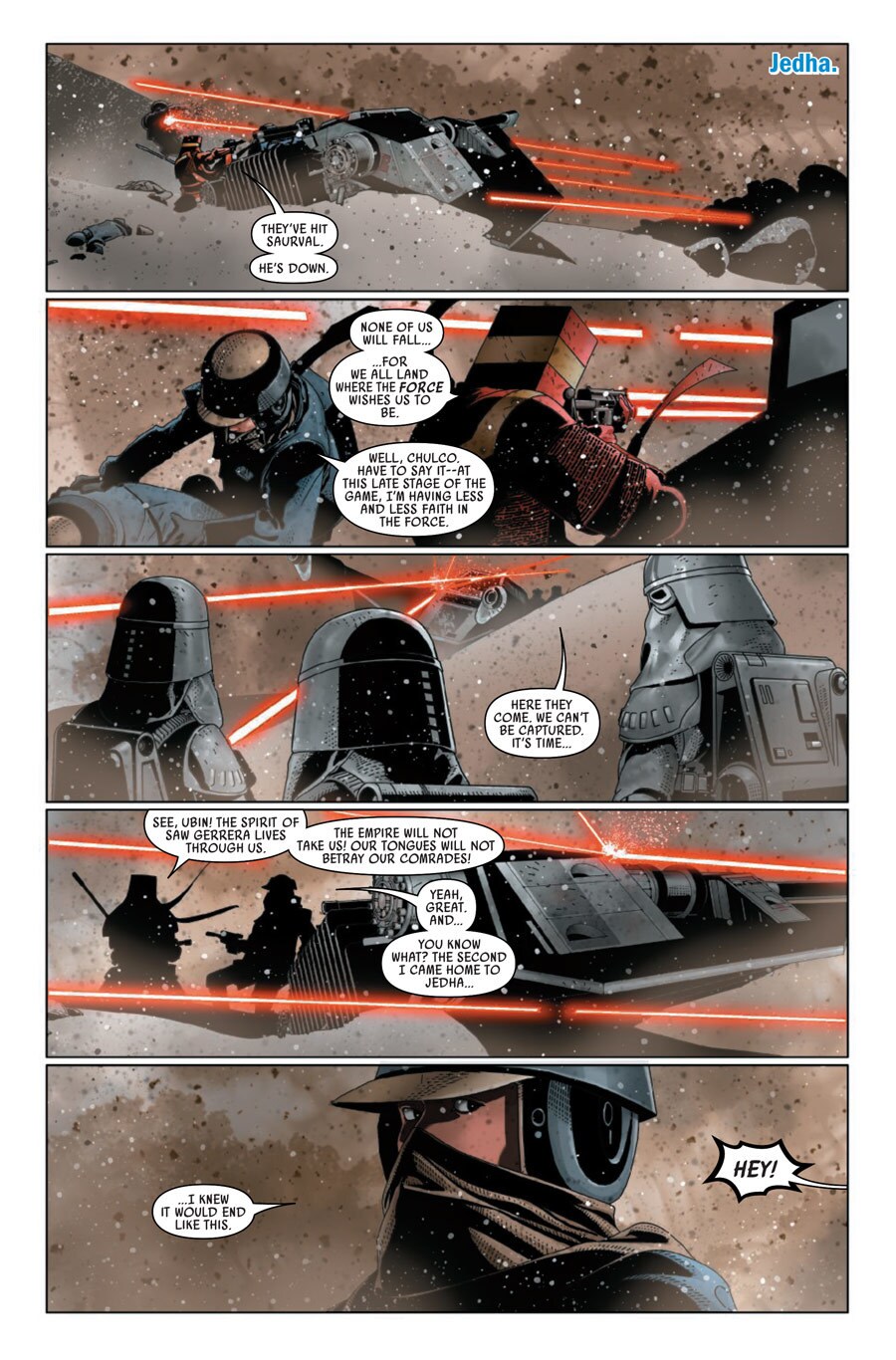 StarWars.com: You’ve taken readers to Jedha in that first arc, and now we’re seeing Mon Cala. Is there an iconic location that you would like to write but haven’t had the chance yet?

Kieron Gillen: All these jobs are fun. When you sit down and write Han Solo for the first time, it’s a giggle. They’re all such strong characters, they come very naturally.

I would describe writing Star Wars as like playing the blues. You know how it feels, and you want to put your own spin on it, but this is how the song goes.

At the same time, yes, there are a few I’d love to do, like Dagobah, Cloud City, Endor. But they’re hard to set stories on in this period, as none of my cast can really go there, because that would break The Empire Strikes Back. [Laughs] I joke about maybe doing a Yoda on Dagobah story, that’s probably the only exception…but a random side story isn’t the way I work.

StarWars.com: The current Darth Vader story takes us to the past on Mon Cala, where events are happening that are referenced in this current arc. Did you and Charles Soule collaborate on the story?

Kieron Gillen: It was an interesting coincidence that grew into something more. We realized that we both wanted to do Mon Cala stories, and that they'd be released almost at the same time.

When we compared details, we realized my story was essentially the sequel to his one. Charles is telling the story of the pacification of Mon Cala. I'm talking about its mutiny, which leads to the birth of the rebel fleet -- and paving the way to the victory at Endor. We looked at what each other were doing, and worked out areas we could feed into each other without collapsing the integrity of each story.

Both stories are entirely their own thing, but if you read both, you're going to get a completely different understanding of the sheer scale of the history. There's all kinds of tragic resonances between the two.

StarWars.com: Would you say the Mon Cala arc is a good jumping on point for someone who hasn’t been reading the ongoing series?

Kieron Gillen: Yes, I would say every arc is a good jumping on point! I always think about the arcs as movies on paper. My first arc, "Ashes of Jedha," that obviously has to be a jumping on point, but this Mon Cala one as much so.

It’s hopefully a good story in and of itself, but it’s also a good story for where it leads, because the next arc begins in issue #50. Issue #50 is going to be this very, very big story that my entire run centers around. "Mutiny at Mon Cala" is the lead-in to something kind of cataclysmic and huge in scale.

Star Wars #46, the latest installment of "Mutiny at Mon Cala," is available now.