Keeping Star Wars Secrets, Whether We Know Them or Not

Working at Lucasfilm entails something surprisingly hard: not being able to talk about all the awesome stuff in the works. 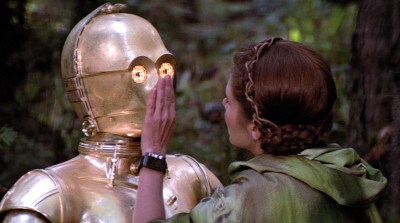 I’ve never had a job that involves quite so much secrecy before. There’s a certain element of surprise when working as a conventional book editor -- you want to reveal a cover at just the right time, or you can’t announce a new deal with an author until the contract is signed -- but as you might imagine, working at Lucasfilm adds a whole other dimension to the need to keep things under wraps. There are projects we can’t talk about yet, which may or may not be related to entertainment we can’t talk about yet, as well as other things that we just can’t talk about yet.

Unfortunately, all this can make coming up with blog post topics frustrating.

Of course, there are plenty of projects I’m working on that are still ongoing and wonderful (i.e., everything Dark Horse Comics is doing right now); as well as projects that are forthcoming and previously announced (James S.A. Corey's Honor Among Thieves, William Shakespeare’s The Empire Striketh Back by Ian Doescher). So why am I stuck right now on what I can’t tell you?

After all, there are good reasons for the secrecy: we need to be sure everything is happening as planned, have to make sure all our ducks are in a row, need to wait for the most opportune moments to make announcements. I get that. But the truth is we don’t actually enjoy keeping things from you. (I’ve had people tell me flat-out that they don’t believe that, but it’s true.) We want to share our excitement! It’s just that as one coworker put it recently, we need things to be fully-baked before we offer them up for consumption. So it's a waiting game on both sides.

One side benefit is that this new-found immersion in enforced patience has helped me be a bit more zen about Episode VII, about which I know just as much as any of you -- which is to say, almost nothing at all. Of course, the professional side of me understands that need for secrecy more than the fervent fangirl side of me, and those two sides are sometimes at war. Waiting for stuff to bake is hard! But I have to tell myself that in the end it will be worth it. And things don't have to bake forever. I know that we’ll hear things eventually, and I know I’ll be excited by each new tidbit, so in the end it’s about trusting the creators and making myself wait and not letting myself be thrown into a maelstrom by every rumor that comes along. Because no matter how antsy I get, it is all going to happen. It’s just a matter of time. I feel certain that Yoda would have some wise words about all this.

So maybe we all, myself included, need to take a deep breath and accept that there are certain things we’re just not going to know right away. The journey may take a while. The important thing is that it doesn't make the end result, when it comes, any less rewarding.