The writer of Marvel's bestselling Star Wars comic talks about the stunning finale of the series' opening story arc.

Today marks the release of Marvel's Star Wars #6, the culmination of a fast, fun, game-changing opening story arc. Set right after the events of Star Wars: A New Hope, the series does a masterful job at capturing the core characters of the original trilogy as we first knew them -- Luke is just starting his Jedi journey, Han and Leia's I-think-I-like-you/I-can't-stand you banter is in full force, and Darth Vader is a hateful nightmare of a villain -- while adding to the mythos in major ways. In issue #6, there are several more game-changing moments, and StarWars.com caught up with writer Jason Aaron to discuss the comic's events surrounding Luke, Boba Fett, and Darth Vader. [Spoiler warning: This interview contains specific discussion of issue #6, so don't read if you want to be surprised.]

StarWars.com: What are your thoughts having now completed your first Star Wars arc?

Jason Aaron: Well, it's been a pretty cool experience so far. I think all of us were excited coming into this. Everybody who's working on the books, everybody at Marvel, we were excited to have Star Wars comics back at Marvel for the first time in so many years. Everybody was excited to be doing the first big Star Wars project of 2015, which of course, is going to be a very big year for Star Wars with the new movie coming out. I think we were all hopeful and excited coming into this, but I'm not sure anybody was quite expecting the response we've gotten, and the way the books have been selling, and all the multiple printings we've gone through for all the Star Wars books. The response has been really mind-blowing.

StarWars.com: It feels like you came out swinging right from issue #1. When you decide, "Alright, I'm going to have Luke square off against Vader," which is a pretty big deal, do you feel any trepidation? Or do you think, "I'm just going to go for it and tell the best story I can tell?"

Jason Aaron: We certainly did want to come out swinging, and for a couple reasons. [I wanted] to show that these weren't going to be just little side adventures that took place between the films. I wanted to show that we were grabbing for the biggest story beats we possibly could. I wanted this book to feel important, and to feel like the next chapter of that overall story. We always talked about the look and tone and feel of everything with this book. We wanted it to seem like it was 1977 and you just walked out of that original film and were handed this comic, and it felt like the next chapter of what you just watched. So, yeah, having Luke and Vader come face to face right away by the end of issue #1 was a big part of that. Just to show that there are a lot of big beats out there that happen between Episodes IV and V and we're going to grab for as many of them as we can. StarWars.com: You showed Boba Fett in some intense action scenes, as well as hunting and fighting Luke. How was it writing him? He doesn't speak a lot in the films.

Jason Aaron: It was fun. I mean, it is challenging, you're right, because he's a character we all grew up with and love, even though he doesn't really do much or say much in those original movies. It is a little challenging to throw him into action and keep him quiet and not turn him into a chatterbox, but to also have him function within the story. Of course, it was also a challenge as to how to have him interact with much of our cast, because Luke doesn't seem to recognize him in The Empire Strikes Back.

StarWars.com: That's where the flash grenade comes in.

Jason Aaron: Right. With Luke being blinded, it allows us to kind of dance between the raindrops of Luke fighting him without ever seeing him, and it's a nice little callback to Luke's training with Obi-Wan. It was the only real bit of Jedi training we see him do when Obi-Wan teaches him on the Falcon with the blast helmet on.

Boba Fett was a character on the shortlist right from the get-go. I knew I wanted to have a big Boba Fett fight between him and somebody. But who could that be beyond just Han, which we'd seen before? I liked having him cross paths with Luke in this situation.

StarWars.com: One of the big reveals in issue #6 is Luke's discovery of Obi-Wan's journals. What does that mean for the series going forward?

Jason Aaron: The next issue, issue #7, we get our first story from those journals. Luke finding that book accomplishes a couple of things. One, I wanted to show that Ben did leave something. Ben, you know, left Tatooine probably knowing that he wasn't coming back. If he didn't, he wanted to leave some kind of marker behind for Luke to help him try and figure his way. He doesn't tell him, for whatever reason, "Page one, Darth Vader is your father," "Page two, go to Dagobah and look for Yoda." For whatever reason, he doesn't give him those kinds of directions. It's more a roadmap that Luke has to figure out for himself.

That's part of it. The other part of it is, I just wanted a way to tell some Ben Kenobi stories. I love old Obi-Wan Kenobi. The Ben Kenobi who'd been living on Tatooine, hiding out. I think there are a lot of cool stories we can do with him. I'm always attracted to older action leads, so I love doing Ben Kenobi as a sort of grizzled old gunslinger in a backwards world. So, between arcs, we'll always cut back and do a story from Ben's journals.

StarWars.com: Maybe we can have an Old Man Kenobi / Old Man Logan crossover.

Jason Aaron: [Laughs] There we go. I'd write that, sure.

StarWars.com: Vader looms large over the series, and I'm curious how you view him. At this point in the timeline, he's essentially evil. But when he sees Luke's lightsaber and at other points, it seems like there may be other things going on with him.

Jason Aaron: You know, I don't dive into Vader's head too much. He's got his own series where Kieron Gillen has been doing such a great job of showing what Vader gets up to on his own. For me, the fun has been writing him as just this force of nature, and putting him in situations where we could see him cut loose. I think we got to do quite a bit of that in those first three issues; seeing him take down an Imperial walker by himself was fun.

There are little moments like that where you can tell he's not a Frankenstein monster, and he's not just a completely soulless beast, and there is something going on underneath the surface and wheels are turning. By throwing him and Luke together right out of the gate, it puts them in an interesting position, because they're chasing each other without realizing it. And we've really just seen the very beginning of that chase. 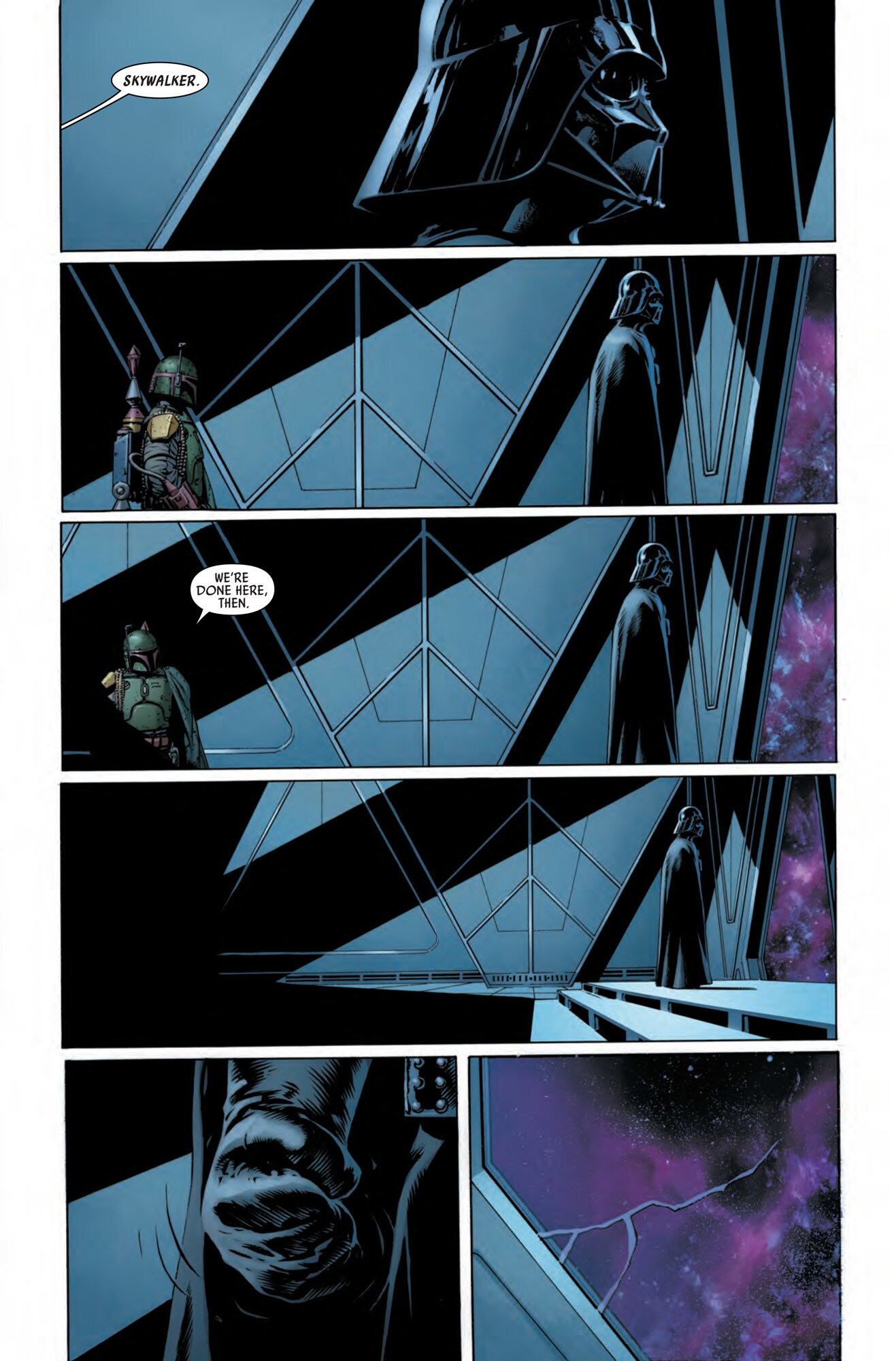 StarWars.com: Tell me about the final scene from issue #6, where Vader learns the name of the Rebel pilot who destroyed the Death Star: "Skywalker." How did the staging of it, with the silent panels and the shattered glass, come about?

Jason Aaron: Again, that's one of those big beats that happens between those two films. That was a bit we all kind of wrote together when we did our first meeting with the Lucasfilm Story Group, and all of us who were working on the books went out to San Francisco to meet with everybody. It was me, Kieron Gillen, John Cassaday, and Jordan White, our editor. We were all hanging out at the bar after getting a tour of the Archives at the Ranch. We were just having drinks and talking about all of the different stuff we wanted to do, and we all wrote that scene together. So we knew that our first arc on this book would end with that moment. With Vader hearing that name, Skywalker, for the first time.

StarWars.com: What's going through Vader's head? Is he angry? Does he realize the Emperor lied to him? Does he think Padmé survived?

Jason Aaron: Clearly, there's just a ton of questions floating through his mind, right? Just an explosion of emotion and questions. Because again, all he heard was just one word. Just Skywalker. He's gonna be left with a lot of questions he needs answered, and I think we'll see him start to look for those answers in this book and in Kieron Gillen's Darth Vader book.

I said from the get-go, we wanted it to, on the one hand, feel like that original film, but also mix up the toys a little more. So, you see speeder bikes and Imperial walkers, and you see Vader face to face with Jabba the Hutt, and you get Luke going head to head with Boba Fett. Going forward, I want to continue to do that. I want the tone to feel like what we all know, and what we all first fell in love with, but continue to mix up the elements and the characters. Not just with those original three films, but with stuff from the prequels and The Clone Wars, as well, and of course, with the new stuff that we'll have going forward.

StarWars.com: Now that you have an arc under your belt, is writing Star Wars easier? Or are you still learning?

Jason Aaron: I still feel like I'm learning as we go. There's so much stuff. As I've always said, I was a big Star Wars fan growing up, because I was the perfect age. Even though we've started a new canon, there's still so much stuff out there that can be used and played off of. So, yeah, I still feel like I'm learning a lot and figuring out all the possibilities. The Lucasfilm Story Group has been a big help with that. It's always wild to have meetings with them, because at Marvel, we have these retreats where we sit around and talk about Marvel characters in a kind of shorthand, because that's what we do. We're writing these characters constantly. The Luasfilm Story Group has that same sort of language with Star Wars. They know these characters and this story and this entire timeline like the back of their hand. It's always great to know that you have them keeping an eye on everything that we're doing, and giving us a helping hand when we need it.

StarWars.com: Finally, how does it feel for you when you see The Force Awakens trailer, Han says, "Chewie, we're home," and you can say, "Oh, I'm writing that guy."