For Inkkas, the Future of Star Wars is Female -- Exclusive Reveal

The shoe company has a new print focused on Rey, Leia, and Padmé. StarWars.com takes you behind the scenes for a first look at the line available for pre-order now.

The poise of Padmé Amidala, the faith of Leia Organa, and the strength of Rey have been drawn together for a new Inkkas design that celebrates some of the most courageous heroes in the Star Wars saga.

“We want to celebrate the complete saga,” says Tatiana Salaverria, Lucasfilm’s senior designer who worked with the unisex footwear company to create the print, “The Future is Female,” which will appear on two pairs of shoes in their new Rebel Collection. 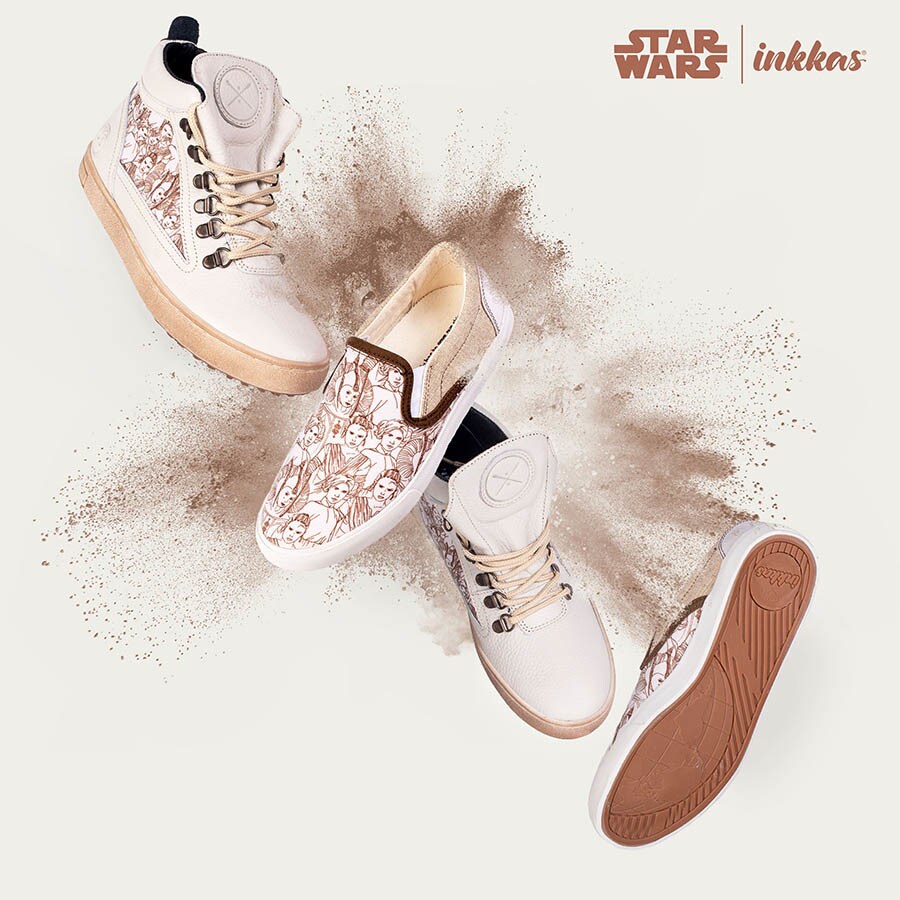 What started as a simple sketch of Princess Leia from A New Hope drawn by Christine Lynn Johansen, the lead designer for Inkkas, evolved into a cohesive print, with all paths coming together in an elegant celebration of the original trilogy, the prequels, and the sequels. Each character flows into the next, with Rey’s simple signature arm bands blending into Queen Amidala’s elaborate headdress.

But simplifying these Star Wars icons into a line drawing came with its own challenges. “The most important thing was for us to get their likeness, even though it’s a little bit stylized,” says Salaverria. With the shoes available for pre-order starting today, StarWars.com goes behind the scenes into the making of a saga-spanning print celebrating three generations of Star Wars women. 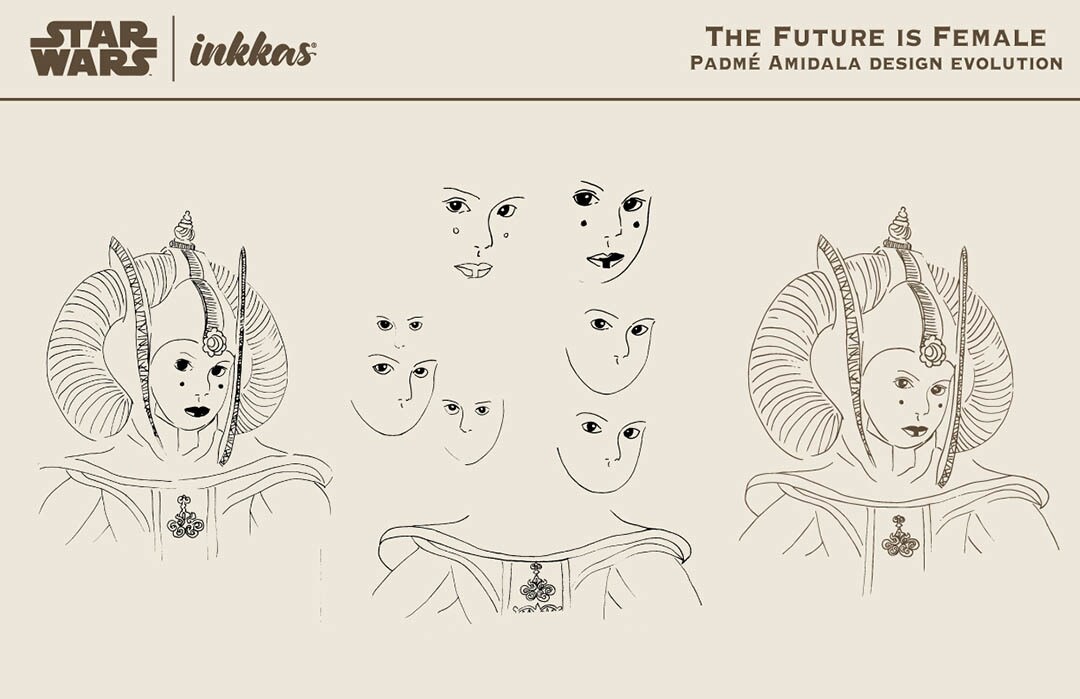 The fire of a queen

“Padmé, I think, was the hardest,”says Salaverria. “At first, she was a little too sweet. Padmé, she’s young, but she also has fire behind her.”

“She was looking a bit too young,” agrees Johansen, who tried to concentrate on capturing the emotion of the queen’s face. “It was a challenge going into it. That’s pretty much what we concentrated on getting exactly right. She has that stripe on the lip. We didn’t want it to look too heavy because since it’s all line work we tried to make to look feminine and pretty.” To me, she's royalty

For Leia, Johansen’s lines were too thick initially, with the detail on the character’s signature double hair buns giving her hair a little too much weight. “On this print, for sure, less is more,” she says. “It started with too much of a heavy hand. With the eyes, we needed it a little bit more realistic and the lips…we made them a little more subtle.

“We wanted to keep it classic, so with Leia it was a no-brainer to go with her gown,” adds Salaverria. 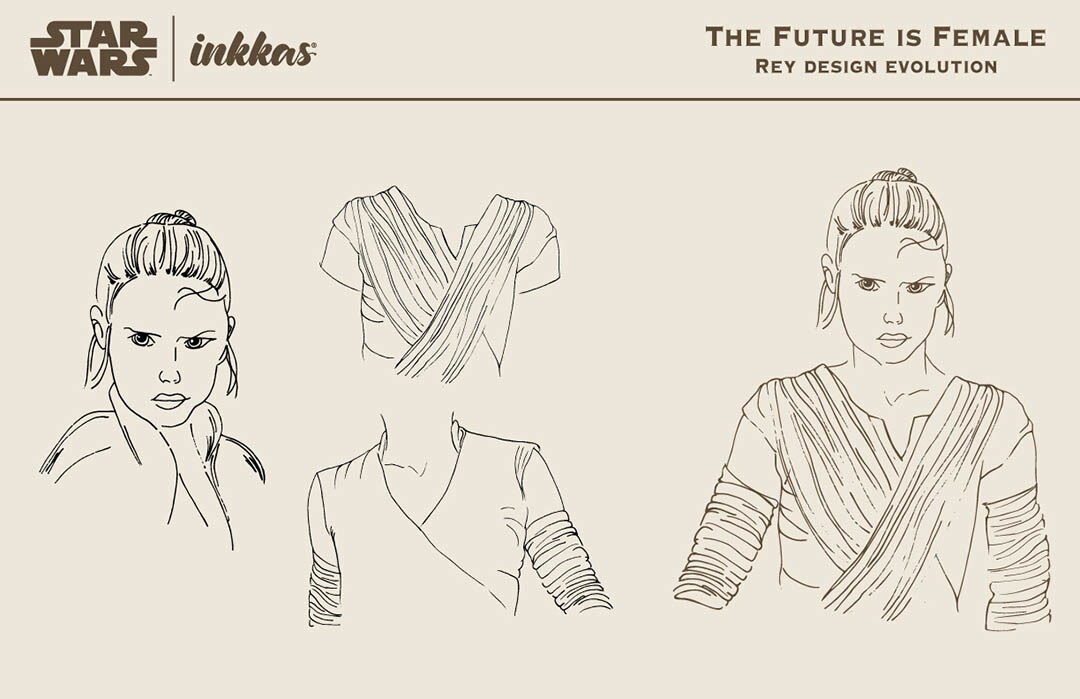 For Rey, Johansen toyed with recreating the outfit that takes the character from the Resistance base to the feet of Luke Skywalker on Ahch-To. “We actually went back and forth quite a bit in terms of what costume to use,” says Salaverria. But ultimately the ensemble the character wore for most of The Force Awakens made the most sense.

In addition to the “Future is Female” print on a slip on and camping boot style in the line, there’s a Force Flex X sneaker designed in the color palette of Leia Organa. All three shoes include a subtle Rebel Alliance emblem and a quote from Leia, uttered just before she and her would-be rescuers went diving into the Death Star’s garbage chute: “Somebody has to save our skins.”

The droids you're looking for...

The line also includes two other pairs of shoes, a slip on and a Flex Force sneaker, that pay homage to two other vital, saga-spanning characters: R2-D2 and C-3PO. After all, if not for the brave little astromech and his fretful counterpart stowing away on an escape pod on the Tantive IV, the Empire’s quest for the stolen Death Star plans may have ended before the first act in A New Hope. The insoles for those designs channel Obi-Wan Kenobi and his trusty Jedi mind trick with the oft-quoted phrase, “These aren’t the droids you’re looking for.”

A Force for good

More than just beautiful pieces of footwear, Inkkas is a force for good, says company co-founder and Director of Sourcing and Distribution David Malino. The company’s OneShoeOneTree project plants a tree for each purchase. “Supporting environmental causes is a big part of our ethos. To date, the Star Wars and Inkkas collaboration has been responsible for planting 5,376 trees as part of Inkkas' OneShoeOneTree program."

And with TreesForTheFuture, the brand is helping to fight deforestation in developing nations. “They plant trees mostly in Africa,” he says, “and that’s an important pillar of what we do as a company.”

But the new print also speaks to Inkkas’ dedication to authenticity in original textiles and prints and inclusivity, depicting strong female characters on shoes to be worn by men and women. “As a brand and a company, it’s important for us to support causes and women’s empowerment,” Malino says. “What the company stands for is inclusiveness and this is something that we’re excited to celebrate. We want to make a statement that this is something we’re really excited about. And we want Star Wars fans to be excited with us and celebrate the powerful female characters in all the films.” 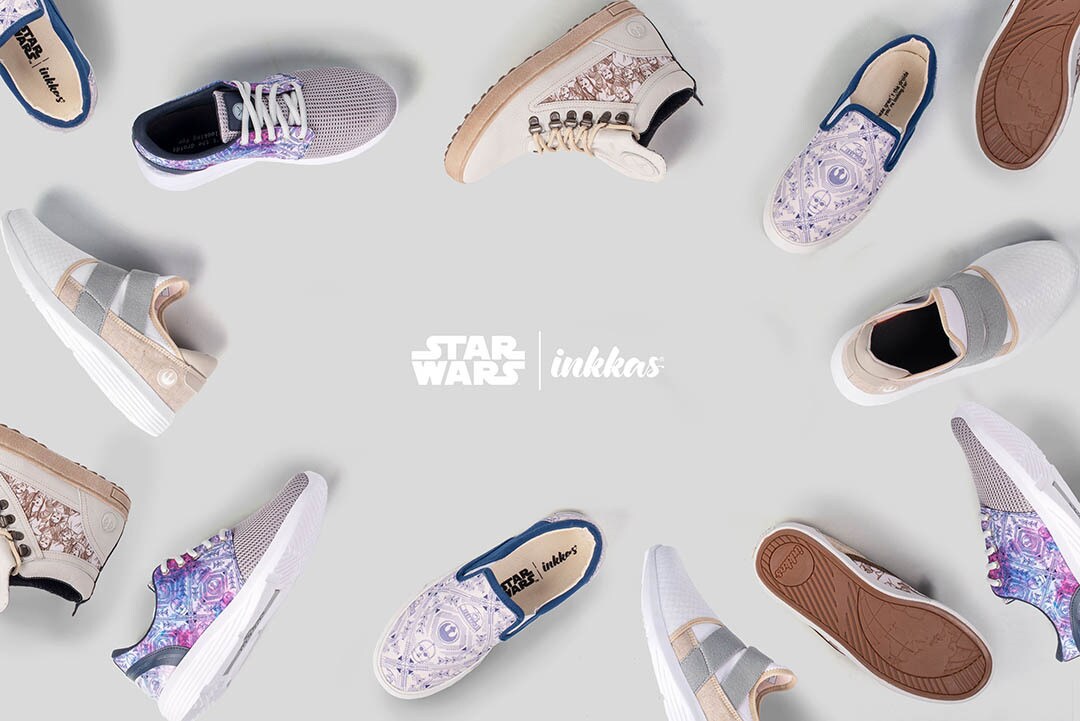 The Rebel Collection is the third collaboration between Inkkas and Star Wars, available for pre-order starting today.

Learn more about the company’s philanthropic initiatives at Inkkas.com.