As a kid, Erik Hollander was never satisfied with a new Star Wars blaster toy fresh out of the box. To make the gun feel authentic, he would drag it in the streets until it was worn out, abused, and crusted in grime.

When he got the chance to join the team at Roxy's Pit on a new fan-made, life-size sculpture of The Force Awakens' hulking luggabeast earlier this year, the 49-year-old applied some similar tactics.

“He was literally scratching the luggabeast with a shovel and throwing a real chain over it,” says sculptor Rick Bohler.

The cybernetic beast made its convention debut at Orlando's MegaCon in May, and has joined the touring circuit alongside his predecessor -- and Bohler's first Star Wars creature creation -- the towering 14-foot-high Roxy the Rancor.

Bohler and Hollander, longtime friends whose first job out of high school was in creating dark rides, are both meticulous craftsmen. “It’s kind of like writing the backstory for the character,” Hollander says of the rust drips, dings, and dents pocking the luggabeast's armor. “This piece of helmet, it’s been twice used and repurposed so it would have all kinds of scars and scrapes. I would take a chain coated with real rust and I would just drag it across. The marks that it leaves are very subtle, but they’re there.” Taken together, the overall look gives the piece authenticity, tangibility, and depth.

A hand for Roxy

Although Bohler makes a living as co-owner of Pizzazz Scenic Contractors in Jacksonville, Florida, crafting fantastical facades and creature features for theme parks, zoos, and other clients, his creations don't typically need to withstand being repeatedly rebuilt on a cross-country touring circuit, or the weight of exuberant fans barreling down on the foam-and-rubber form.

In 2012, Paisley, a nearly 20-year veteran of the 501st Legion, approached Bohler for tips about constructing a rancor head and hand for a Jabba's Palace-themed party the group was hosting. Paisley was hoping to pick Bohler's brain for tips on materials and molding, then construct the pieces in his garage.

Instead, Bohler proposed the full-scale, full-bodied behemoth and offered to do the work himself pro bono. “I thought the guy was crazy,” Paisley says. Six months and hundreds of hours and coats of paint later, Roxy debuted. But what was intended as a one-time prop soon became a spectacle at fan conventions and even Star Wars weekends at Disney theme parks. Paisley reattached Roxy's right hand -- the one George Lucas had signed -- after a young fan leaped into her palm at a Disney show, and Bohler and his crew had to reinforce some parts in fiberglass, bringing her weight up to about 2,000 pounds. Head to tail, she's about 17 feet long and 9 feet wide.

If Bohler were constructing her now -- and he hopes to one day soon create a more travel-friendly version that is an exact replica of the beast living in Jabba's Tatooine lair -- he would do some things differently, he says.

Bohler already incorporated some of those lessons into Lemmy while constructing the beast of burden over four months earlier this year. A wooden skeleton beneath layers of foam and rubber give the animal added stability, so some special fans can safely throw a leg up over the 7-foot-tall backside and pose as if they're a Teedo taking a ride. Head and body are attached by a giant wooden block compared to Roxy's eight pieces that must be snapped together like a giant action figure, and he weighs in at about half Roxy's size -- a more manageable 1,000 pounds.

After Roxy's success, Paisley and Bohler knew they wanted to create a new life-size sculpture from The Force Awakens. Known in some circles as the Monster Masters, Roxy's Pit, or more simply Roxy's two dads, everything the two friends bring to life from the Star Wars universe has to be enormous, unique, and interactive for fans.

In February they approached Lucasfilm about building something from the newest installment, and got the green light to craft a luggabeast to the exact scale and dimensions of the cybernetic pack animal spotted on Jakku. The original beast seen on screen was brought to life by puppeteers Derek Arnold and Tom Wilton, and created by CFX creative supervisor Neal Scanlan, concept designer Jake Lunt Davies, paint finish designer Henrik Svensson, and senior animatronic designers Steve Wright and James Sandys. The creature features prominently in the scene where Rey first meets and rescues BB-8, a fact which has already drawn many Rey cosplayers at the half dozen appearances Lemmy the luggabeast has logged so far.

Bohler did all of the sculpting and painting on his first creation, but brought in longtime friend Hollander for the luggabeast project. “I was that kid in school that I was really good at art and really bad at everything else,” Bohler said. “I was doing portraits when people were still playing with crayons.” But when he met Hollander as a teen, for the first time Bohler felt like his talents were belittled by Hollander's seemingly effortless way of painting.

“Every time he tells the story he makes it sound like I’m da Vinci,” Hollander says before effusively praising Bohler's skill at sculpting beasts that seem like they could lumber away at any moment but are little more than blocks of etched and chiseled foam and rubber.

“We’re planning to do another Star Wars creature,” Bohler told him last year. “He didn’t have to finish the sentence and I was just like, "Yeah, you tell me when and I’ll make the time.”

Each piece had been created through donated time and materials and storage space donated by Bohler and his business partner Bob Nelson, but they're worth about $330,000 combined, Paisley estimates.

On the convention circuit, the two monsters have already brought in tens of thousands of dollars for charities as fans line up to mug for the camera and donate to the various causes. “We never charge for photos,” Paisley says. “Never have. Never will.” 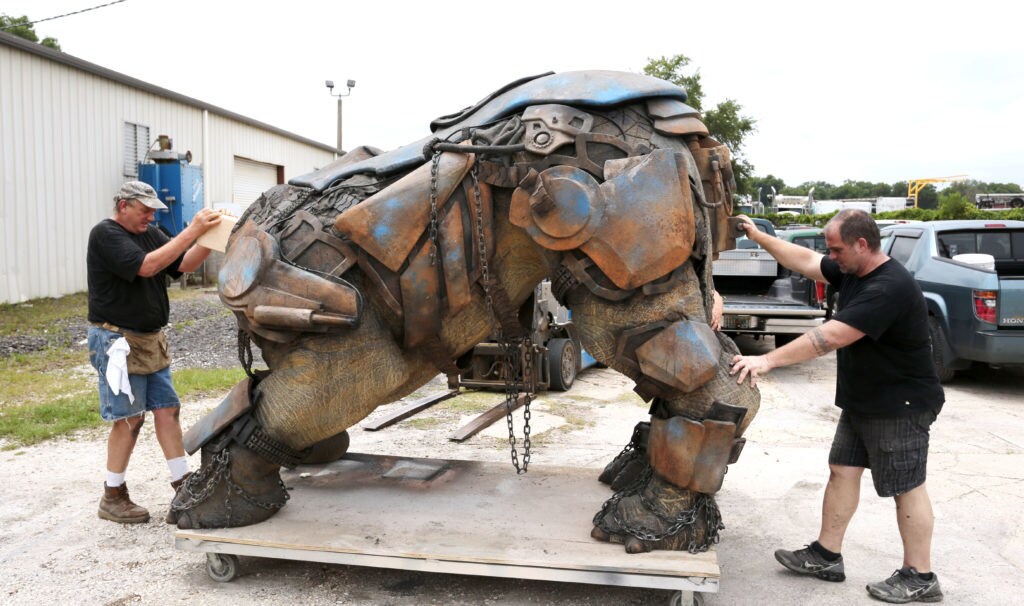 On screen, many of Star Wars most iconic creatures are makeup and suits, puppets and CGI, brought into sharp focus on highly processed film, but translating to reality isn't as simple as recreating the prop. “You don’t put theater makeup on a movie star,” Hollander says.

The crew behind Roxy's Pit knew the luggabeast was going to be permanent and had to be easily transportable in a 53-foot-long enclosed truck.

Bohler used reference photos ranging from movie stills to musclebound bulls — “like a bodybuilding cow” — and rhinoceros flesh. Then he scoured the aisles of Home Depot and sifted through transmission parts searching for the right shapes and intricate pieces to make the salvaged armor helmet and armor. His son, Dylan Bohler, fiberglassed the seat for durability and Mark Rusco welded a special-ordered ¾" motorcycle chain to complete the armor. But most of the pieces were ultimately fabricated by hand in intricate detail from PVC plastic, hosing, and mostly-hidden metal screens in the under armor. Layers of translucent paint give the beasts depth and believability that you're staring at flesh and “old, rotten, nasty rusty parts,” Bohler says. “If you can walk up to one of my pieces and recognize it's paint, I did something wrong.”

He is so precise in his work, the rancor had her own fingerprints and both she and the luggabeast are anatomically correct, he says. “I try to capture the details and the wrinkles. If I can count the number of folds, they’ll be there and to scale.” The creatures have thus far been christened with rock 'n roll monikers. Roxy's name came from a flippant decision when “Roxanne” by the Police came across the stereo system inside Bohler's shop and Paisley suggested fit her personality. For Lemmy, the team took several suggestions to the fan base for a vote, and he was ultimately named after Motorhead frontman Lemmy Kilmister. It's a meta choice since the luggabeast literally has a motor head, Paisley notes.

But the team at Roxy's Pit is far from finished with their traveling menagerie. They're constantly considering bigger, better ways to showcase their sculptures with additional props, like a Teedo for Lemmy's saddle and a net to capture the BB-8 that already sits at the beast's side, and scenic backdrops.

In addition to the rancor's mate, Bohler and Paisley have aspirations to craft a movie-quality, film-accurate Jabba the Hutt perched on a throne. While others have recreated the crime lord before, Bohler's vision includes plenty of moving parts so Jabba could interact with fans, thrashing his slimy tongue and changing his expression as he chortled and writhed. “We would build the best one and I’m not being cocky,” Paisley says proudly.

Or the crew could make a departure from the organic to recreate one of the films' iconic ships. “We’re known for making animals,” Bohler says, “but we’re also good at making mechanics and making mechanics look believable.”

The Roxy's Pit crew wants you to help them pick their next prop project — head over to https://www.facebook.com/RoxyTheRancor and let them know what you would like to see them build next!


Kristin Baver is a writer and all-around sci-fi nerd who always has just one more question in an inexhaustible list of curiosities. Sometimes she blurts out “It's a trap!” even when it's not. Follow her on Twitter @KristinBaver.
Rancor (Star Wars) lemmy luggabeast roxy