Learn the story of the amazing Hoth-ready costume that went viral this month.

We can't think of a better arbiter of Luke Skywalker cosplay than Mark Hamill himself, so when the actor tweeted his praise for a four-year-old boy riding his custom tauntaun earlier this month, we couldn't argue.


Perhaps no one was more excited than the boy's father, Clint Case, who built the snow beast from scratch in his Corona, California, garage. Overnight, a YouTube clip of his son Hudson gleefully trotting around the family's home had become a viral hit.

Case was fielding phone calls from licensing companies and European cosplayers who wanted to pay him to build a larger version of the costume.

But the fuzzy Halloween getup was a one-off project, Case says, that was a year in the making. “It was fun,” Case says of the months of preparation. “I just kind of picture myself doing what those guys did back when they made Empire Strikes Back. Half the time I was out there with my bluetooth on listening to Star Wars music while I did it. It was inspiring.”

Last Halloween, Case, 37, wife Sarah, and their children Hudson and baby Harper, now 2, all had costumes to fit the Star Wars theme. Sarah, a talented seamstress, made her own Han Solo smuggling garb, while Case went as a dressed-down Darth Vader. Hudson wore the robes of a Jedi while his sister donned the baby buns to become a pint-sized Princess Leia. 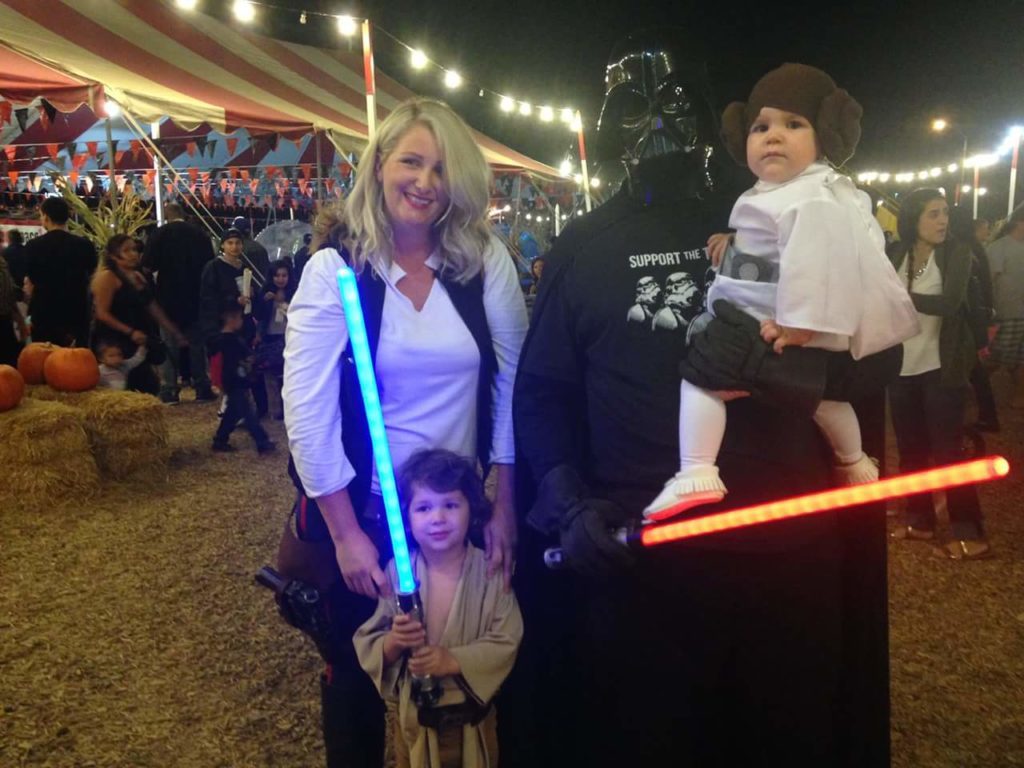 But Case, a meter technician for Southern California Edison by day and a leather craftsman for Bruiser Custom Cycle in his free time, knew he wanted to make a more elaborate tauntaun suit to transform Hudson into Luke Skywalker scouting the planet Hoth in time for Halloween 2016 and a trip to Disneyland's Halloween celebration. “I always loved Star Wars, but having kids now it’s like I’m reliving everything through them,” Case said.

First, Case scoured the internet for ideas. He's not the first to recreate the smelly beast, although he says he found a lot of interpretations that didn't quite hit the mark. He was confident that he could build the body, but he didn't know how he would sculpt the face until he stumbled upon a Pinterest board for a cosplayer who had subbed in a faux goat head. “I spent hours on Amazon looking for a goat mask,” he says, before settling on an adult-sized rubbery facade that he could cannibalize for parts. Airbrush paint gave it a dingier look, “like a dirty poodle,” and he ordered a pair of demon horns that could be antiqued and painted to complete the face.

In May, Case started his project in earnest, eyeballing the general shape of the animal using movie stills and trying to size it to Hudson's petite frame. The suit needed to be light enough for a pre-schooler to lug around and relatively breathable for the California heat. “I just wanted to give myself enough time. I knew it was going to work. I didn’t know it was going to look good.”

Even with his engineering and artistic acumen, Case says he had to go back and make the head a second time after it came out disproportionately large. “And I actually forgot the arms,” he says.

The base of the suit, which allows Hudson's legs to masquerade as the tauntaun's back paws and give the appearance that he's riding the animal, was a frame of thin-gauge wire from Home Depot, shaped and fused with a MIG welder. Initially, Case balanced the tail out with a pickle jar full of change, then replaced the weight with a bundle of glue sticks to keep the tauntaun from tipping and avoid a safety hazard. Hot glue became Case's go-to, and he estimates he melted down about 100 sticks before the final fur covering was in place. For the front paws, Case used leftover motorcycle seat foam and coated them in a rubberized finish to give the look of real snow lizard claws.

Building the bottom was a challenge. A leather girdle attached a pair of pants, which Case made out of an old bed sheet he found lying around the garage, and the entire wire base was covered in polyester batting. Simply wrapping the boy's legs in fur wouldn't have the right musculature to mimic the beast of burden, so Case used materials to build up the legs more akin to a kangaroo's hind quarters. At one point, Case envisioned leather feet with individual toes and toenails, but Hudson couldn't move in the prototypes. “It was like he was walking in diving flippers,” Case says. Instead, the boy's shoes were covered in felt and the inside of the pants are lined with velcro hooks to keep the legs firmly affixed at the base. The hack worked so well, Hudson's shoes routinely stay put when he gets out of the costume. “That was kind of a nightmare every time he wanted to take it off,” which seems to be about five minutes after he's put it on, his father says. 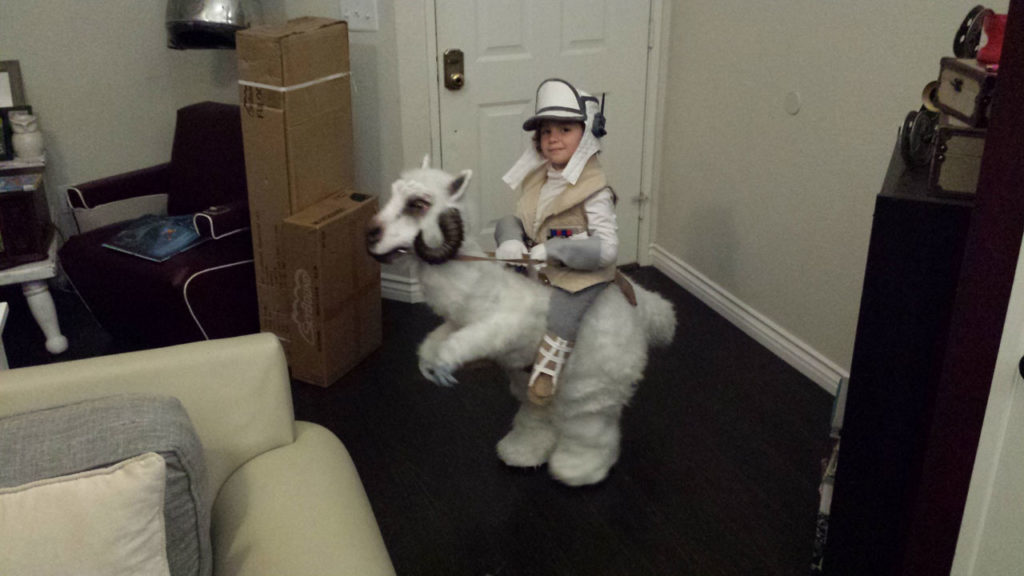 The batting had some stretch, which made it flexible and easy to work with, but the final fur covering wasn't as forgiving, requiring layers that were carefully glued in place to blend into a nearly seamless finish. All said, the costume cost about $80 to build and weighs in at a slim 5 pounds or less, Case estimates. Realizing Hudson would be climbing out of the suit to ride on amusement park rides and get some air, Case's wife created a full Hoth Luke ensemble so he would still be in full costume when he emerged, leaving a pair of faux legs behind to complete the effect that the boy is riding a real tauntaun. “I knew he wasn’t going to want to be in it constantly,” Case says, “because he just wanted to get candy and ride rides. It was kind of more for me. I made that thing and I wanted him to look really cool in it.”

On a Sunday night, the ensemble was finally complete, and Hudson tried it on for the first time. On a whim, Case shot a 40-second video clip of the boy's joyous reaction, and posted it online. “I’m just going to put this on YouTube to see what happens,” Case thought. Then he went to bed.

By the time the family got up to go to Disneyland's Halloween celebration the next day — this year, donning Hoth-related outfits complete with a baby wampa — the video was getting picked up by news sites and fans as far away as Germany were on social media clamoring for Case to build them their very own tauntaun.

So far, the original clip has been viewed over 570,000 times, and other websites, like costume seller Funidelia, posted their own versions. The Funidelia Facebook post alone captured 42 million viewers. 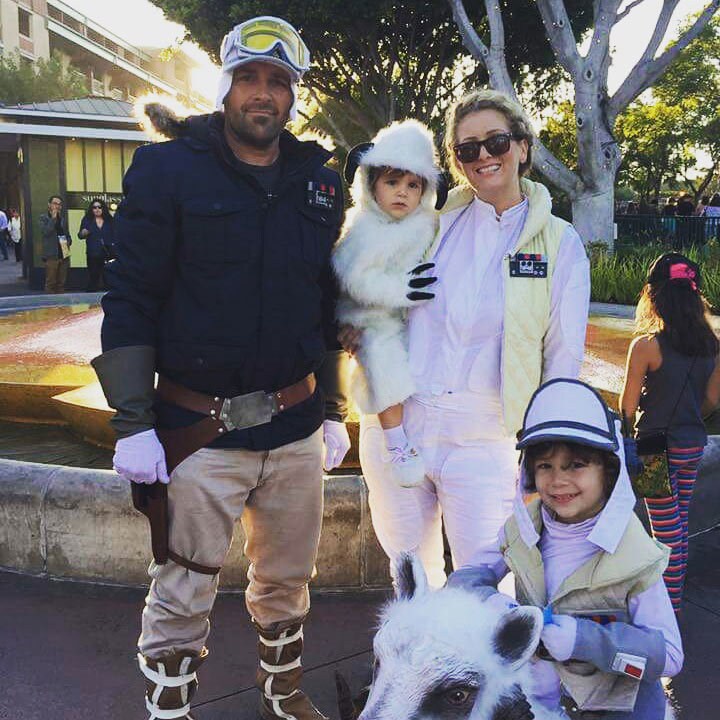 As Case and his family strolled around Disneyland, less than 24 hours after posting the video, Hudson was already being recognized from the 40-second clip. “It was weird,” Case said. “Everybody recognized him when we got there. 'Oh, that’s the kid!'”

Hudson was largely unfazed, with a laser focus on collecting treats and enjoying the rides that overshadowed his sudden celebrity status. But father and son were both ecstatic about the Hamill shout out. “We told him Luke Skywalker tweeted that he liked his outfit,” Case says. “And that was on my birthday. It was one of the best birthday gifts ever. I got a Twitter account just so that I could thank Mark Hamill.”