When it's this detailed and beautiful, the garbage will do.

Rey was determined to get back to Jakku to wait for her family in Star Wars: The Force Awakens, but the planet didn't have many appealing qualities. There was sand, Niima Outpost, sand, the dulcet tones of Unkar Plutt, and did I mention sand? For all its unattractive traits though, the desert planet makes a fantastic setting for a diorama. Kelly Krider, an experienced Jedi Master of making dioramas and a member of the R2 Builders Club, decided to put a Millennium Falcon model into the dusty setting of Jakku. The result is anything but garbage. 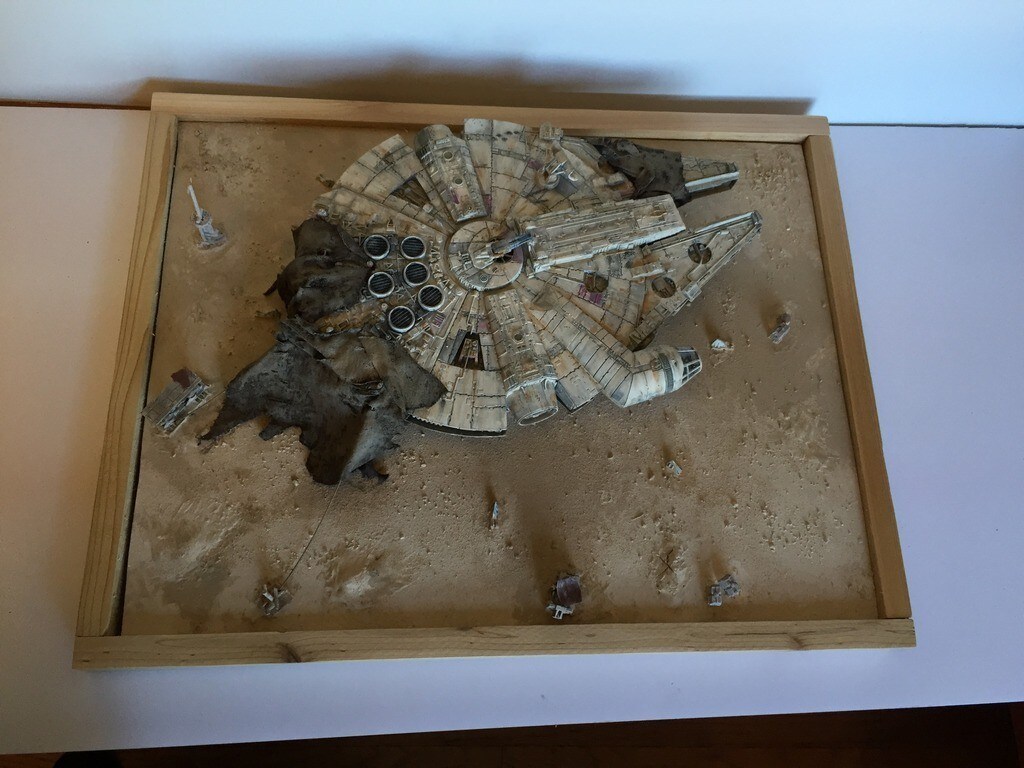 Krider first got to know Star Wars through the toys, receiving them the first Christmas they were available. The Empire Strikes Back was the first Star Wars film he saw in the theaters. Fast forward over a decade to 1995, and Krider built his first-ever diorama, depicting a scene from The Empire Strikes Back. He used a couple of ready-made kits from MPC (Model Products Corporation) as a starting point; the packages included parts to make Echo Base on Hoth, as well as items to recreate the Battle of Hoth. Kelly added to the kit by making a papier-mâché cave and hanging Christmas lights in it. 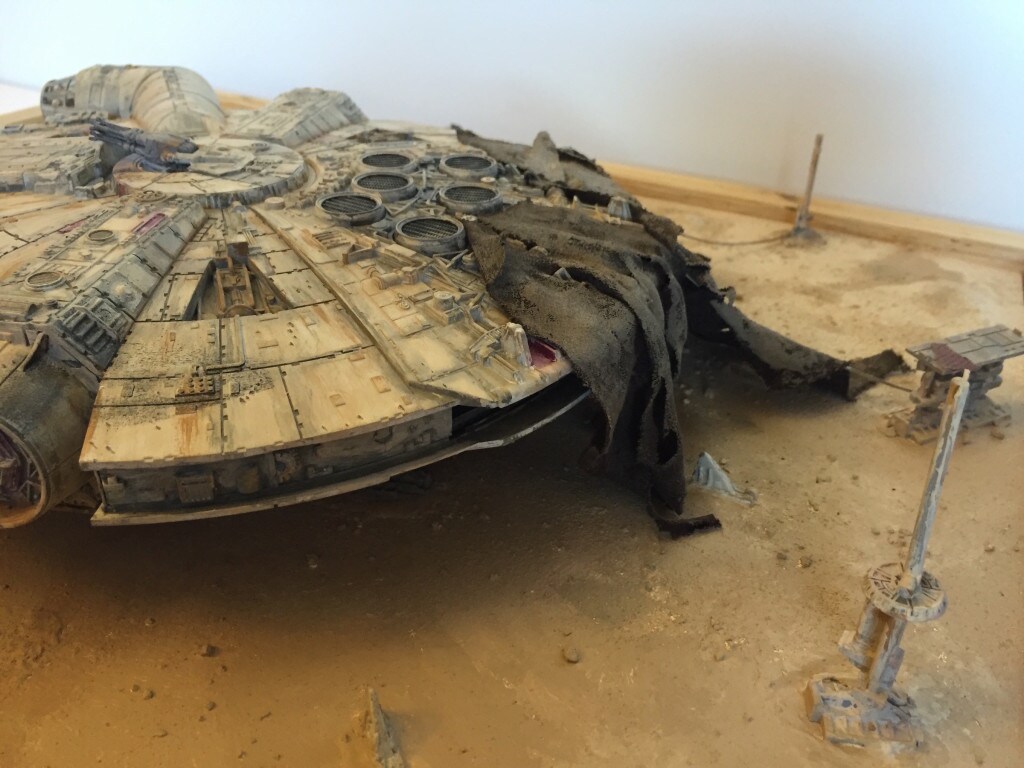 He's crafted many other dioramas since, including a couple featuring the Millennium Falcon. Krider says, "I find the biggest challenges with building dioramas are usually finding good references of all the details. I usually have to make some stuff up to fill in the blanks. I have a Mos Eisley cantina / Docking Bay 94 diorama that now resides at Denver's Wings Over the Rockies Air & Space Museum. I had to mash up some of the details to get it work together."

After Krider saw The Force Awakens, he knew he had to make a diorama featuring the Falcon on Jakku. "I picked up a new Revell Force Awakens Millennium Falcon model kit," he says. "The kit needed some minor modifications and a fresh paint job. I had to see the movie again for reference so I could get the tarps correct. I ended up taking an old brown T-shirt and cutting out the pieces I needed. I took those and soaked them in Elmer’s glue, then shaped them and allowed them to dry. Once hardened, I painted them to make them dusty and tattered." The attention to detail shows in the finished diorama. The Falcon looks like it's been sitting there unused and unloved for years.

He put a similar amount of elbow grease into a different diorama featuring the Millennium Falcon, replicating the Death Star hangar. "The Death Star hangar diorama began simply because the Fine Molds Millennium Falcon model was so nice it deserved a great display," Krider says. "It is 1:72 scale and I realized the Micro Machine figures were close to that scale. Aside from the Falcon model and the figures, everything was homemade. I made wall sections out of PVC sheets and created molds. Most of the walls are resin cast. I made custom vinyl decals for the interior walls and hallways to give it that iconic Death Star look. It's been a work in progress going on eight years. It's still not finished, and I have more plans for it." 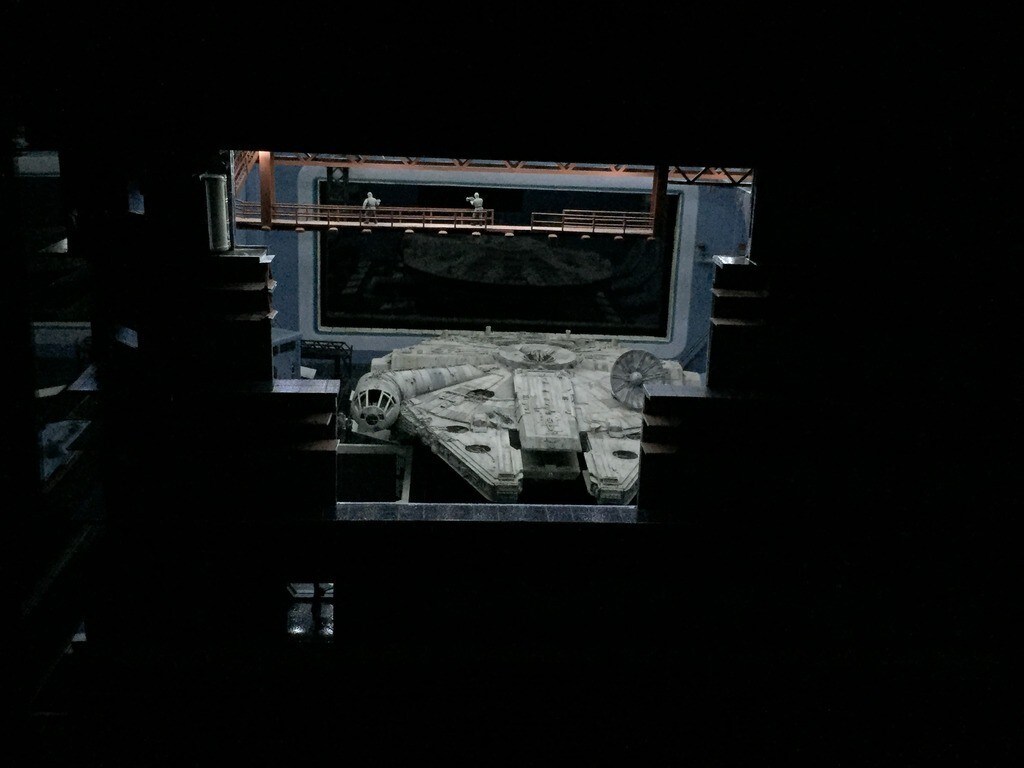 What project is next besides continued work on the hangar? Krider says he has about four builds going at any given time. He's considering doing the Falcon's askew, crashed look on Starkiller Base, the remains of Poe Dameron's battle damaged X-wing in the village on Jakku, or maybe the island where Rey found Luke.

You can see more photos of Krider's work at Photobucket; he has albums showing off the Jakku build, an incredibly detailed replica of the Death Star hangar, and much more.

Ships of the Galaxy: The Millennium Falcon