Attending a Star Wars Celebration isn't like going to your average comic convention. It's something special to be surrounded by so many people who are present for a single purpose. In a way, it's like coming home. Don't get me wrong -- getting to see cool exhibits, exciting panels, and exclusive sneak peeks contributes to making the experience all the more memorable, but connecting with fellow fans is a huge part of it for me. You never forget your first Celebration.

Since Celebration Europe is just around the corner, it seemed like an ideal time to talk with people about their memories of their first times at a Celebration.


The best place to start is the beginning. The first Star Wars Celebration took place in Denver, Colorado in 1999. Episode I was on the horizon, and fandom was at a fever pitch. Matt Springer was there and remembers the excitement...and the rain. “Because of the rain, there was a great spirit at this Celebration -- a real sense of community, that we were all in this geeky Woodstock of a mud pit together and we'd make it through. I was waiting in line for one of the panels when I noticed someone quietly straightening up the posts and chains through which the crowd would travel to enter the giant main tent. I looked up at his face only to quickly realize it was Anthony Daniels! Other fans noticed too, and started shouting comments and questions at him -- he smiled and replied in good spirits. He was one of the hosts of the main stage, and so this was his "theater," and it was really heartwarming to see him down in the mud with the rest of the fans, trying to keep things tidy and make it a positive experience in a small way." 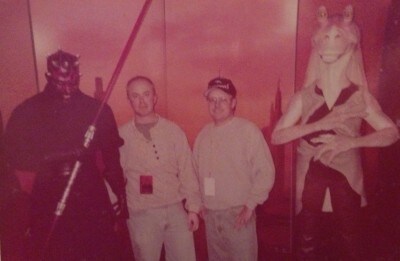 Joshua Stolte lived in Denver and was ecstatic when he found out the first Celebration would be happening there. At the time, he wasn’t as open about his passion for Star Wars so he liked connecting with others who shared this enthusiasm without passing judgment. “Despite the first days of unexpected downpours, the excitement was more electric than a fist full of Force lightning! Exhibitors displayed what was to be the beginning of many years of collecting goodness, members of the cast and crew shared an excitement for the movies that was rarely seen in the years following, cosplayers saw the potential of playing in such a rich universe, and most importantly, a new generation of fans were born. All of this and more created an amazingly intoxicating atmosphere of camaraderie and enthusiasm. It truly changed me forever. Finally I knew I wasn’t alone. Now I knew I could share my lifelong hobby with thousands of others. And from there I never looked back. I’ve attended every US Celebration since, and at each one I have added friends that have made my life richer with every prequel release, midnight toy debut, and exclusive movie announcement. The Star Wars movies are an incredible cinematic phenomenon. But for me, the fans are the main reason it’s so much fun. My Star Wars buds are there to laugh and cry, hope and dream, and continue to watch those binary suns rise and set.”

Pardon me, I think I have something in my eye. 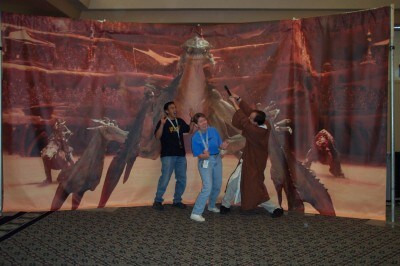 Those who couldn’t make it the first time around started with the sequel: Celebration II in Indianapolis. James Floyd wasn’t really connected with a ton of Star Wars fans online yet, and the experience was eye-opening for him. “While I had some great experiences meeting different original trilogy and prequel trilogy actors for photos and autographs, I think the best memory I have was meeting new friends. As we attended several Expanded Universe related panels, we found that some of the same fans kept being in the same lines with us, and we made friends with Laura G. from Chicago, who was a lot of fun and loved reading and talking about Star Wars novels. On the last day of Celebration, we found some different backdrops for photo ops and did some funny poses with the acklay. Afterward, we kept in touch via e-mail, and met up again for later Celebrations and even Comic-Con, and we'd always try to re-enact our poses with the acklay backdrop, even if we couldn't find it!”

Are you noticing a theme? The Force brings friendship.

Celebration III brought George Lucas. It was Nanci Schwartz’s first time at Celebration or any large convention for that matter; the “sheer enormity” of the event surprised her. I can relate. “That convention marked George Lucas' first convention appearance in years, and I and several of my friends decided to camp out overnight to see his panel. I got bronchitis from sleeping in the freezing cold rain, but it was totally worth it. I'll never forget the cheers of "Thank you, George!" when he came onstage. It brought tears to my eyes. That said, I'll never camp out overnight again!”

Several people shared in that experience. Once Matthew Dougherty and his friends found out Lucas would be appearing at Celebration III, they went to the neighborhood super store to get supplies. “We got some camping chairs, ponchos, trash bags, a small tarp, and some umbrellas. We were set.” They taped trash bags around their legs, took shifts so some could go back the hotel room, and soldiered through. They were eventually let inside and got into the first show. “We were wet and tired but it didn't matter. We did it.”

I feel like there should be a geek merit badge for “became ill because of waiting outdoors for a panel.”

That Celebration seems to hold a special place in the heart of fans. As Joey Esposito pointed out, “At the time of course, it was the last Celebration where there'd be a new Star Wars movie to look forward to, and that buzz was electric. It felt like the last hurrah, and as such, the most memorable experience was the sizzle reel of Revenge of the Sith that they showed. It was a bulk of the opening battle with a whole bunch of other stuff thrown in. I vividly remember coming out of the screening room ecstatic, in tears, and overjoyed. It was the most thrilling convention experience of my life. Experiencing something like that with someone close to you that feels the same way about Star Wars that you do -- let alone hundreds of other fans -- is incredibly moving.”

Celebration IV made a splash on the West Coast in 2007 and by this time, fans were starting to understand it was the sort of event you didn’t want to miss. Eric Geller was there and besides meeting people he’d only known online and iconic actors from the films such as Carrie Fisher and Peter Mayhew, he attended the first ever panel for Star Wars: The Clone Wars. “By far my most memorable experience at Celebration IV was the panel that gave the world its first glimpse at a little project called Star Wars: The Clone Wars. To put this panel in context, remember that in May 2007, probably only a few people in the audience knew who Dave Filoni, Matt Lanter, or Ashley Eckstein were. The Clone Wars was brand new to us. I can vividly recall jumping to my feet and applauding after the brief teaser clip that was shown at the end of the panel. Six years later, Filoni and the cast and crew of The Clone Wars are Star Wars rock stars. But I still remember that moment in 2007 when I realized that, even with Episode III in the rear-view mirror, the Star Wars franchise was alive and well.” My first Celebration was in 2010. I waited until late in the game to book my flight to Celebration V, and I didn’t have any spare vacation days to use for the trip. I took a red eye to Orlando and arrived around 6:00 a.m. on Saturday morning. I walked around in a fuzzy but thrilled state that day with glazed eyes, and I even fell asleep in a collecting panel (I still feel guilty about that). I packed as much as I could into my itinerary for two days and I headed back to Los Angeles around 7:00 p.m. on Sunday. I was completely exhausted, but it was all worth it and I knew I’d do my best not to miss any Celebrations in the future.

More Celebration memories to come; please share yours in the comments!