Fully Operational Fandom: All In The Family 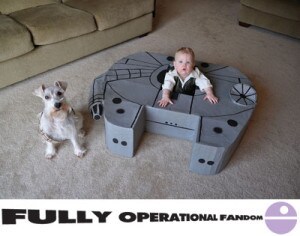 One of the best parts about being a Star Wars fan is sharing it with the people you love. The films, comics, toys, books, and television series help the saga reach across generations. You'll find fans in all age groups. To paraphrase another movie with Liam Neeson, Star Wars actually is all around.

This is evident at conventions and on Halloween when you see so many children dressed up as Darth Vader or Princess Leia. It has to be a blast to pick out costumes for your kids and even more fun when you get to join in the fun and dress up next to them.


Lucas and Lesley Karpiuk got into the spirit and built their son, Liam, a Millennium Falcon of his very own. It's made from cardboard (because sometimes kids like playing with cardboard more than the presents that come in them) and paper mache. Once he had the fastest hunk of junk in the galaxy, they pulled out the right clothes and posed their schnauzer as Chewbacca. They're looking forward to introducing him to the movies in a year or two. 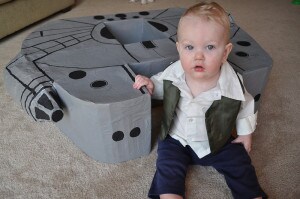 Something tells me you're never going to want to tell that kid the odds.

It has to be a happy moment when your kid comes to you and asks for his first lightsaber. Michael Avecedo was so thrilled when his son Christopher requested a lightsaber that he not only got him one, but he got him the whole Jedi outfit. “It's wonderful to see my son not only share in my love of Star Wars, but to see him have his own opinions on it with the prequels and of course The Clone Wars,” said Avecedo. They dress up together and often sketch new costume ideas for different conventions. It's become a bonding point for them. 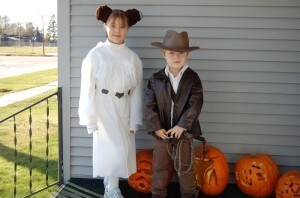 The galaxy far, far away has opened a new world of interests for Kylee and Rory Lane's family. She says her son constantly looked at Lucasfilm Fan Club magazines and developed an interest in puppetry and special effects. When her daughter chose to dress up as Princess Leia it was because she was the “coolest and toughest” princess she could think of. That sparked her interest in cosplay.“Without Star Wars being there for my children in the very beginning, they would not be the costuming, special effect-seeking, space-loving young adults they are today.”

The Star Wars saga is much more than films for so many of us. Costuming has been a huge part of Jeff Parks' family for years. It all started when his daughter Ainsley was six and started getting to know Star Wars characters. She started with Princess Leia and since then has been Ahsoka, a Mandalorian, and more. His daughter Ainsley has worn 14 different Star Wars ensembles in her six short years of costuming. Yes, we're all jealous of her closet. Parks says Ainsley's cosplay has led them to experience conventions differently. “Before Ainsley was into Star Wars I would just go to the conventions to get the exclusive or hard-to-find collectible then leave. We didn't know anyone. Now we all look forward to not only conventions but charity events as well. I love working on the costumes and Ainsley is now starting to get more involved first hand.” He also has a 17-month-old who hugs the life-sized props in Parks' house, and she already likes toy lightsabers. 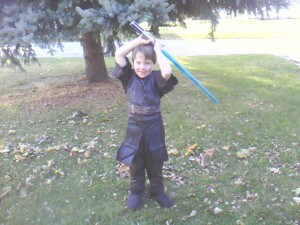 Lacy Clayton's son, Jamie, started young. He saw the films when he was only two and has moved on to watch The Clone Wars and the Ewok cartoons. He fell in love with the saga on his own, and Clayton says he's already surpassed her in fandom. He's requested to dress like Anakin Skywalker twice, has lightsabers (plural), and helmets. They connect over Star Wars by doing impressions and re-enactments together. "He loves when I pretend I'm hologram Leia, complete with glancing behind my shoulder and leaning down to finish the hologram, and he'll do impressions of his own with such a serious face! We love re-enacting Star Wars moments.” 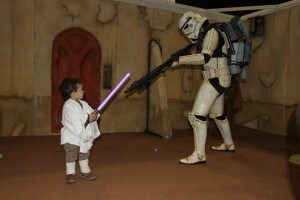 Now imagine that you're a Star Wars fan and a parent and that Leia, Han, and Luke are among your baby's early words. Pretty cool, eh? Peter Burnat, member of the 501st and Rebel Legions, got to experience this firsthand. Even though Dante is young, he already has a wonderful Luke Skywalker costume and likes getting his picture taken. Burnat loved when his son noticed a Stormtrooper on screen and yelled, “Daddy!” He now calls all Stormtroopers “Peter” or “Dada.” Burnat's looking forward to taking him to more conventions and sharing his love for the movies and for costuming.

At its heart, Star Wars is a series about families. The ones we have and the ones we make. Luke said, “The Force runs strong in our family.” It certainly does.


Amy Ratcliffe is addicted to Star Wars, coffee, and writing. You can follow her on Twitter at @amy_geek and keep up with all things geeky at her blog.
fully operational fandom star wars families star wars cosplay