StarWars.com spoke to Star Wars: The Last Jedi creature concept designer Jake Lunt Davies for a special three-part series. Each installment focuses on one new element from the film that the artist designed, complete with Lunt Davies’ concept art, which can also be found in The Art of Star Wars: The Last Jedi. (In case you missed it, be sure to check out part one, on porgs.) Today, we discuss the Caretakers -- the keepers of the island Ahch-To, site of the first Jedi Temple.

StarWars.com: All right, let's talk Caretakers. How did you get started on this design?

Jake Lunt Davies: They came before the porgs and again, that was a one-word brief: “puffin people.” Okay, so it was more than a one-word brief...two words: “puffin people.” And then we were told that they were going to be sort of nuns. They were not necessarily a holy order, by like nuns they were an all-female community of indigenous aliens that lived this slightly monastic lifestyle. They had some role that was important to the Jedi, perhaps. That was kind of it, really. We started to look at aquatic animals. The color ways of puffins combined with aquatic animals, I suppose. And I drew lots of things that were riffing off walruses and seals and whales. I'd done a handful of different drawings, and you can sort of see in about three different drawings, elements that came together. So for instance, in one drawing, Rian [Johnson] liked the fact that they've got bird feet. But the rest of it he wasn't that keen on, it had a mask on or something like that. So we combined a few different elements, and what you end up with, and what I liked about the Caretakers, is that you have this very chunky and, again, quite simple shaped upper body, and tiny, little, thin legs. You get this great silhouette of the Caretakers.

StarWars.com: Interesting. And in their faces I see, correct me if I'm wrong, a bit of turtle.

Jake Lunt Davies: I think we were trying to avoid turtles. I think the photo that you've seen, which is the two Caretakers, they are quite turtle-ish and you're looking at them from the front. They have a stronger profile view, with a much more triangular-shape to their face. We made perhaps up to a dozen. I can't remember now, there were a lot of them. And each one of them was individual.

Between Martin Rezard [lead sculptor on the Caretakers] and I, we created this little maquette model of a head. But it was it was almost like a three-dimensional vector or low-poly version. It was made out of clay, but it reduced a Caretaker head down to its very basic, plain form. That became a blueprint for all the others. It set the template and you could then tweak it a bit. So some were fatter, some were thinner, some might have shorter noses, but at the very core they have this consistent set of dimensions, I suppose.

StarWars.com: I'm looking at the photo that's been released and they’re clearly individuals. Their faces are different. One looks like it might be older than the other. 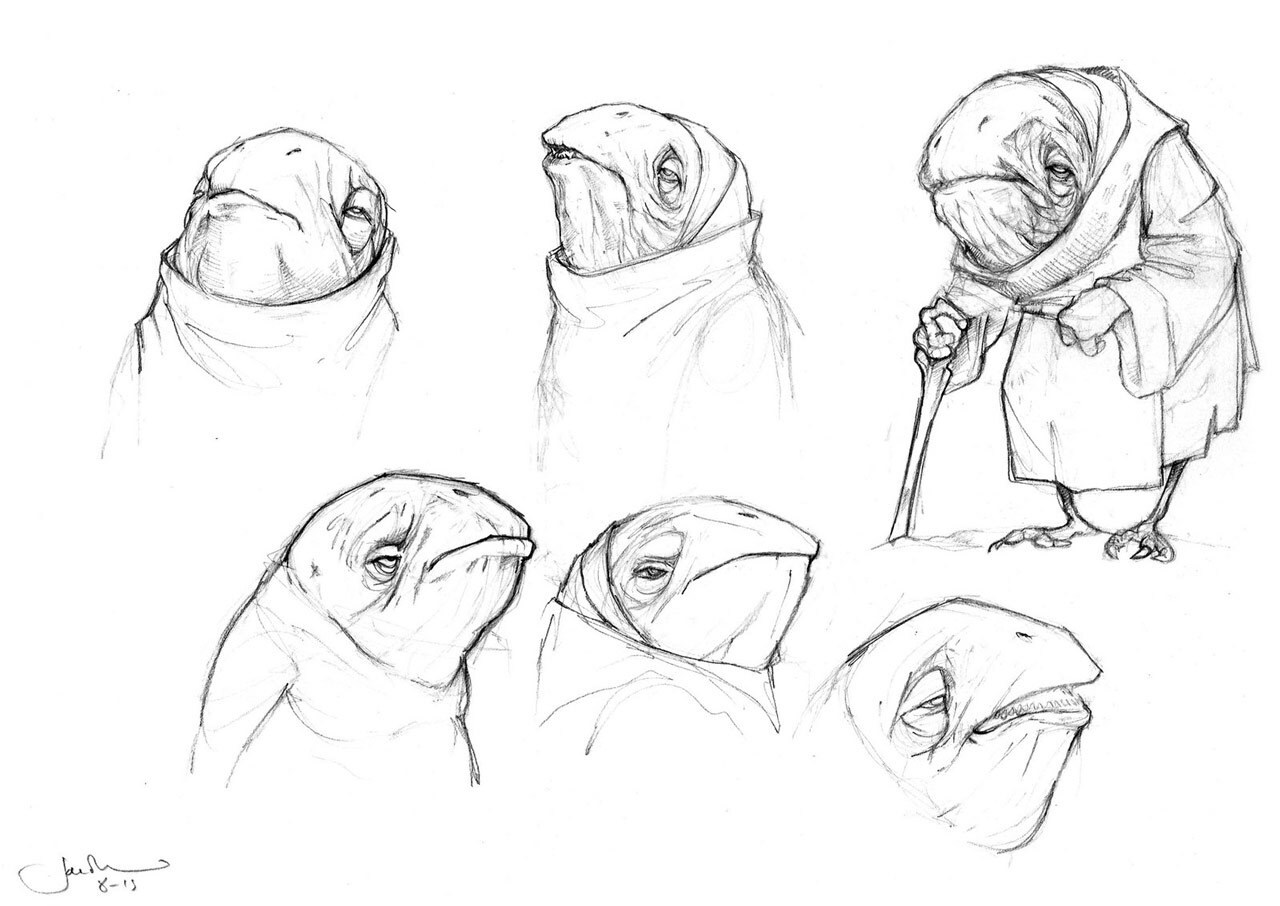 StarWars.com: Is it a challenge to come up with one design but then have to tweak it enough so that they can all read as individuals?

Jake Lunt Davies: Oh, definitely! I think, by and large, when we do creatures we're lucky if we do more than one. There always used to be just one. And we were always saying, “Oh, it would be great to do a race and do lots of them.” Yeah, this was the challenge -- to give each one individuality. A human face has a certain set of key points. Eyes always roughly in the same place, nose is roughly in the same place, but those elements can sort of change. It was probably more of a challenge for the sculptor. I could do my bit. I could draw my thoughts on a younger version, an older version. We did male versions. But really, I have to hand it to Martin and the rest of the sculpting team, because they have this far greater knowledge of anatomy than perhaps I have. I mean, I can do a character to a certain point, but they can just take it and, you know, turn it up by a hundred and make it amazing. So a lot of it, and so much of it, came at that point in the sculpting and what the sculptors brought to it. I really have to give them a lot of credit for that. 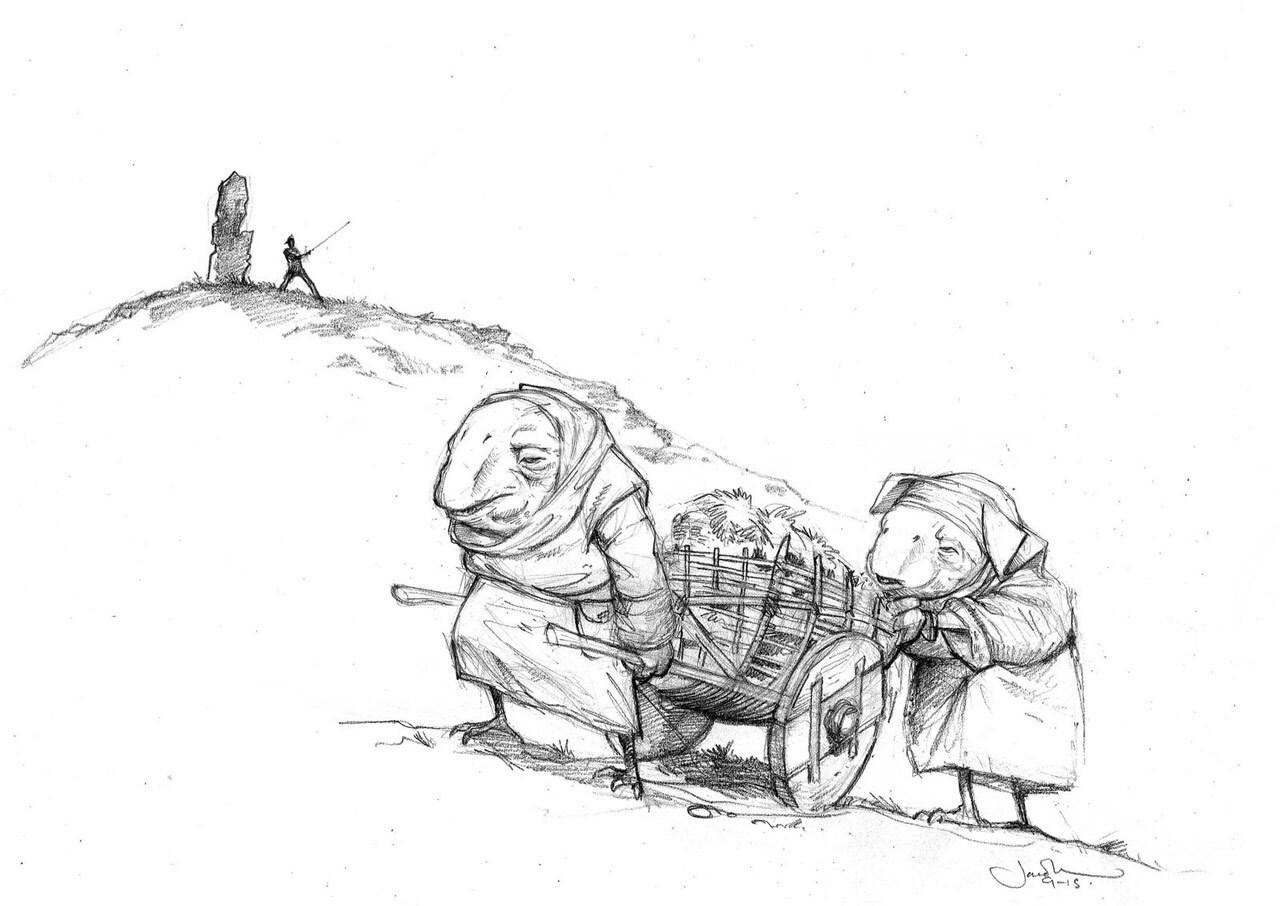 Jake Lunt Davies: Yeah, it did. It certainly did. I mean, when we mocked it up from my drawing, it became too top heavy. It was impractical, the head was massive. And partly aesthetic, if you look at it, “Oh, there’s something not quite right.” But also from a practical sense, the head would have weighed an enormous amount. [Laughs] “Now that we've mocked it up, let's make the head a bit smaller.”

There's always, in the back of my mind, even subconsciously, a thought that these have got to be practical. So we didn't lose a lot. We didn't have to make a vast amount of concessions to practicality to make it work, because it started out from that. 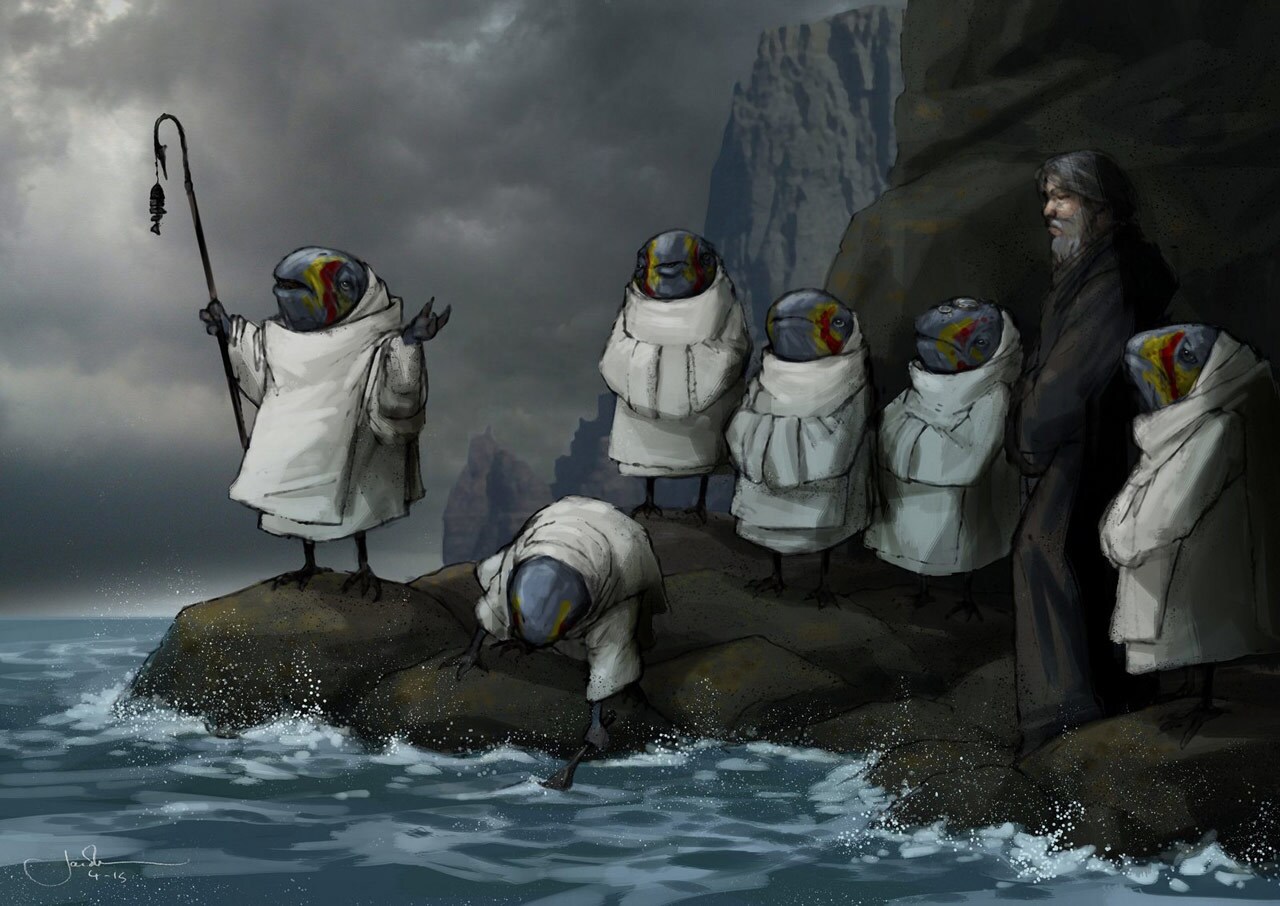 StarWars.com: I look at these and I feel like they could fit right into Jabba's palace or anywhere with classic Star Wars creatures. Were you looking at any designs that came before when you were creating the Caretakers?

Jake Lunt Davies: I think it's just all around us and we're so aware of them, anyway, that it’s not conscious. It's always there at the back of your mind. I think we always stop or even subconsciously think, “Is this Star Wars we're looking at? That's going to work. Or is that Star Wars? Or is it something else?” Hopefully we know it now. [Laughs]

Come back later this week for part three of our interview with Jake Lunt Davies!