Get ready to step inside Star Wars.

According to Chapek, the lands will emphasize living your own Star Wars adventure. Indeed, two major attractions will put guests in the middle of a battle between the First Order and the Resistance.

As detailed on the Disney Parks Blog, one attraction -- the biggest in scale ever at Disney Parks -- will make you feel like you're in the hangar of a Star Destroyer.

The second attraction will have you in the cockpit of the Millennium Falcon, piloting the ship, shooting blasters, and getting ready to make the jump to lightspeed. Your performance in the adventure will have repercussions: do well and you'll earn extra credits; dent the iconic ship, and you can end up on a bounty hunter's list. You can view concept art for each attraction below. 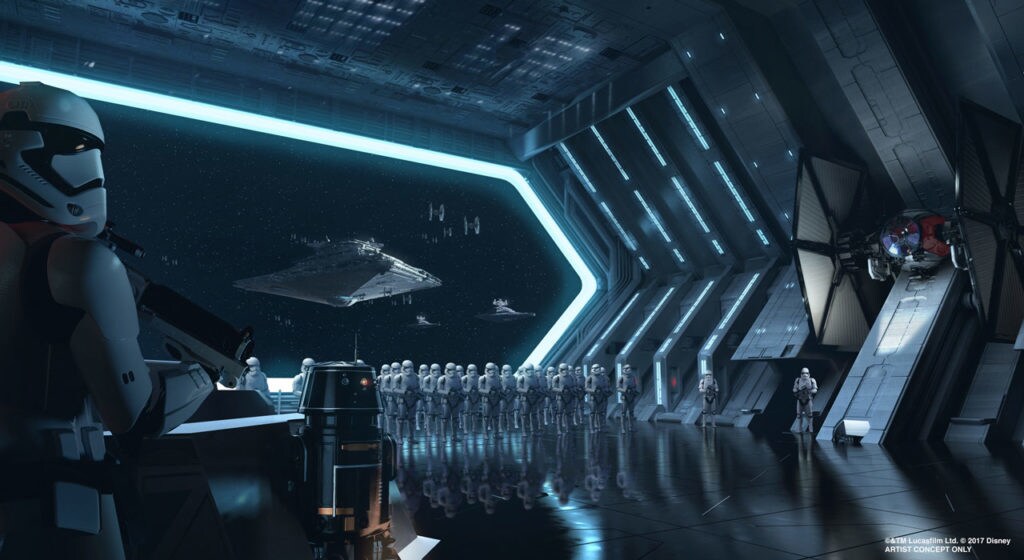 Star Wars: Galaxy’s Edge will also feature several Star Wars characters, including BB-8, Chewbacca, First Order officers, and many more. A well-known Disney Parks droid is heading for Star Wars: Galaxy's Edge, as well: Rex, the pilot from Star Tours, will be the DJ at the cantina -- where you'll order blue milk and other galactic concoctions.

For more on Star Wars: Galaxy's Edge, check out our interview with designer Doug Chiang and see a new fly-through of the model in the video below.

In addition, Chapek also announced plans for a Star Wars-themed resort at Walt Disney World. “It’s unlike anything that exists today,” Chapek said. “From the second you arrive, you will become a part of a Star Wars story. You’ll immediately become a citizen of the galaxy and experience all that entails, including dressing up in the proper attire. Once you leave Earth, you will discover a starship alive with characters, stories, and adventures that unfold all around you. It is 100-percent immersive, and the story will touch every single minute of your day, and it will culminate in a unique journey for every person who visits.”

See the gallery below for a look at some exciting concept art, and get ready to step inside Star Wars.