Twenty-six miles in stormtrooper armor for a good cause. Even the Emperor would be impressed.

One of the most attractive elements of the worldwide Star Wars fan community is its unerring ability to do good things. From the charity work of the 501st and the Rebel Legion to individual fans raising money for causes across the planet to Lucasfilm’s associations with Make-A-Wish and Force For Change, the desire to raise both funds and awareness is hardwired into the fandom. Here in the UK that is no different. The UK Garrison of the 501st Legion recently donated £20,000 to charities nominated by its members, and that’s just a portion of the money raised (and we’re not talking puny Unkar Plutt quarter portions, either).

Jez Allinson, Royal Air Force officer and reenergized collector after seeing Star Wars In Concert back in 2009, decided that this year he was going to do something challenging and eye-catching. He announced that he would run the London Marathon in full stormtrooper armor. No small task. StarWars.com recently caught up with Allinson -- who is also set to appear at Celebration Europe’s Star Wars Legion of Military Comrade panel -- to discuss his training journey, the big day itself, and being mistaken for Darth Vader.

StarWars.com: So Jez, whatever gave you the crazy idea of running 26 miles in full stormtrooper armor?

Jez Allinson: I’d completed a couple of charity runs in 2015 including the London Marathon, which I absolutely loved. So I thought I’d do it again, but I knew I’d need to up the ante in order to get people to sponsor me again. I needed to make it a challenge, and what could be more challenging than running it in stormtrooper armor? I chose to run for Make-A-Wish. Jez Allinson: They are an absolutely wonderful charity who grant magical wishes to children and young adults fighting life-threatening conditions. As a parent, I can only imagine how heart wrenching it must be for the mums and dads of these poor children to put on a brave face every day for the sake for their child, whilst they deal with continual hospital visits and medical procedures. Make-A-Wish make such a difference and I wanted to help them, so I set myself a fund raising target of £2000.

StarWars.com: So you had your charity in place but how did you get the costume?

Jez Allinson: I remember approaching you in July 2015 at Dave Tree’s Farthest From vintage Star Wars show in Fordingbridge and asking if you’d be able to help me make connections with the UK Garrison. It was much later in the New Year that you and I spoke about it again. You went away and did some fact finding and put me in contact with Steve Buckley from the UKG, who has a retired TK armor which he has slightly modified for running, with the thigh pieces adjusted and trimmed. Steve was extremely generous and loaned me his armor for my training and the event and has been fully supportive ever since.

Jez Allinson: I set up the Just Giving and Facebook pages and started to train in the armor. It was in February when things really got going, as someone had filmed me running through my local village from their car, added music and a funny caption and posted it on Lad Bible, the social media viral group. This was shared on Facebook and other social media forums and it went wild. It had 1 million views in five hours and has since settled at around 2.18 million views. This brought extra interest. Radio interviews and local newspapers got in touch and, as such, my Facebook page got some much-needed extra publicity. My sponsorship was boosted by strangers who had viewed the film and decided it was worth donating a few quid. Someone from New Zealand sponsored me £100! In addition to the standard Just Giving page, I’ve done tin collections, bucket collections. My wife and my twins held a cake sale and I’ve held a prize draw. 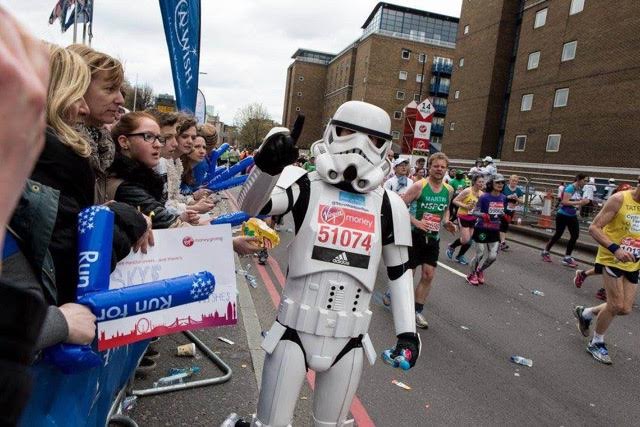 StarWars.com: Why was it necessary to do your training in the armor, given that you had 26 miles ahead of you in the suit?

Jez Allinson: The purpose of the training in costume was two-fold. The first was to raise awareness for the run and to bring in as many sponsors as possible. The second was to figure out where the suit was going to cut, rub, and chafe, and believe me it did!

As a dry run on the 3rd of April, I ran in the Reading half Marathon as a warm up which was great fun but extremely hot!

StarWars.com: Your publicity push even managed to extend to the home of Star Wars in the UK, Pinewood Studios.

Jez Allinson: The week before the London Marathon, I wrote to Pinewood Studios to ask them if they would be okay with me having my photo taken outside the main entrance. I fully appreciate that they are extremely busy and take security very seriously, but they were wonderful and fully supportive of my cause. They even supplied me with a unique sign which I’m going to get framed. It was wonderful to get a good luck message from Lucasfilm and Pinewood.

StarWars.com: So, Sunday 24th April, the big day itself. How did it go?

Jez Allinson: The day of the race came and things couldn’t have gone better for me. The weather was perfect and the atmosphere was incredible. As I was running I could hear people saying, “Go stormtrooper,” “The Force is with you/May the Force be with you,” “Aren’t you a little short for a stormtrooper,” “This isn’t/is the marathon you are looking for,” and weirdly ,“Go Darth Vader.” I twice heard people shout “Traitor!” and some lads outside a pub yelled “Finn Finn Finn!” There were even people singing the “Imperial March!”

StarWars.com: It must have been hard work in the armor.

Jez Allinson: It was a tough old slog. My vision was impaired, hearing anything was difficult. I couldn’t see my feet, bend over, or drink very easily, as I’d decided to do it the UKG way and keep my lid on. This costume was never designed for mobility, which funnily enough is what Brian Muir told me when he sponsored me. That was awesome, getting support and sponsorship from the man who sculpted the original armor way back in 1976! 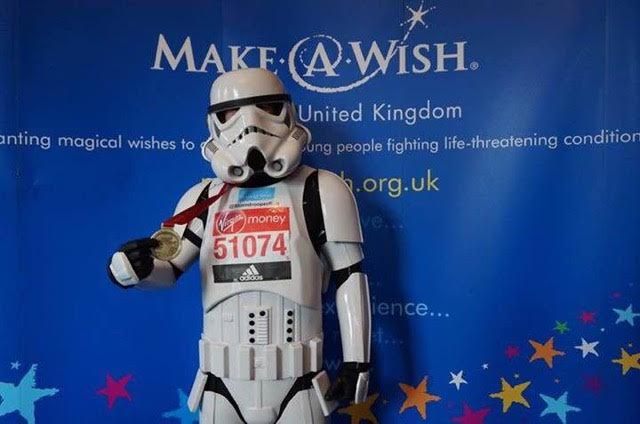 StarWars.com: Now that it’s done, how do you feel about the whole experience?

Jez Allinson: The entire experience was epic and it’s been a huge part of my life over the last few months. Right now, my Make-A- Wish total is just under £4900 and I’d love it if we could get it over £5000. People can still donate, just visit.

I must say a huge thank you to Steve Buckley and Phil Parker for helping me keep the armor serviceable, you and the team at Jedi News Network, the Vintage Rebellion Podcast boys, SWFUK, Pinewood and Lucasfilm, and the wider Star Wars community for their wonderful support. Make-A-Wish are delighted. Together we have made a difference.

To hear more from Jez and his marathon journey tune in to episode 40 of RADIO 1138, where we discuss his training and preparation for the big day.

Mark has contributed to Star Wars Insider since 2006, is the owner of Jedi News, writes for DeAgostini's Build The Millennium Falcon partwork magazine, and co-hosts RADIO 1138 and Take Cover on the Jedi News Network. He's an honorary member of the UK Garrison of the 501st, a friend of the Rebel Legion, and when he’s not talking, tweeting, or writing about Star Wars he can usually be found sleeping, where he’ll most likely be dreaming about Star Wars.