Need a life coach? Master Yoda, the ultimate wise and wizened elder of indeterminate origin and unmistakable syntax, is here to help. 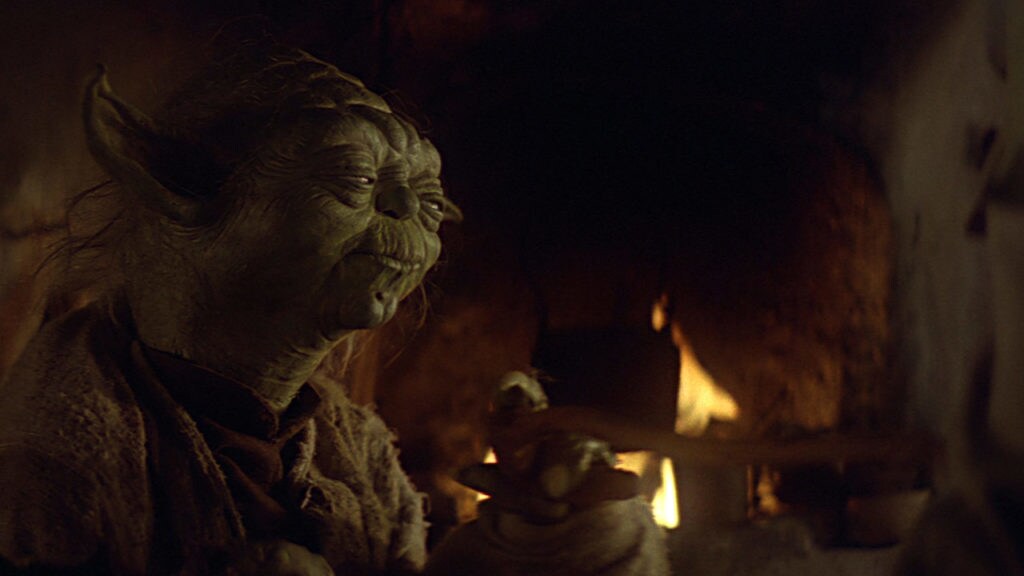 “A Jedi must have the deepest commitment, the most serious mind. This one a long time have I watched. All his life has he looked away...to the future, to the horizon. Never his mind on where he was. Hmm? What he was doing.” -- The Empire Strikes Back

The stern reprimand of Luke's wanderlust is a prescient reminder for all of us: It's tempting to think we were happier yesterday or could be better off still tomorrow, yet none of that matters if we overlook today. Daydream all you want, but you're missing out if you don't at least try to live in the moment. Perhaps Yoda said it best during Luke's lesson in handstand-assisted stone stacking: “Concentraaaaaaate!” 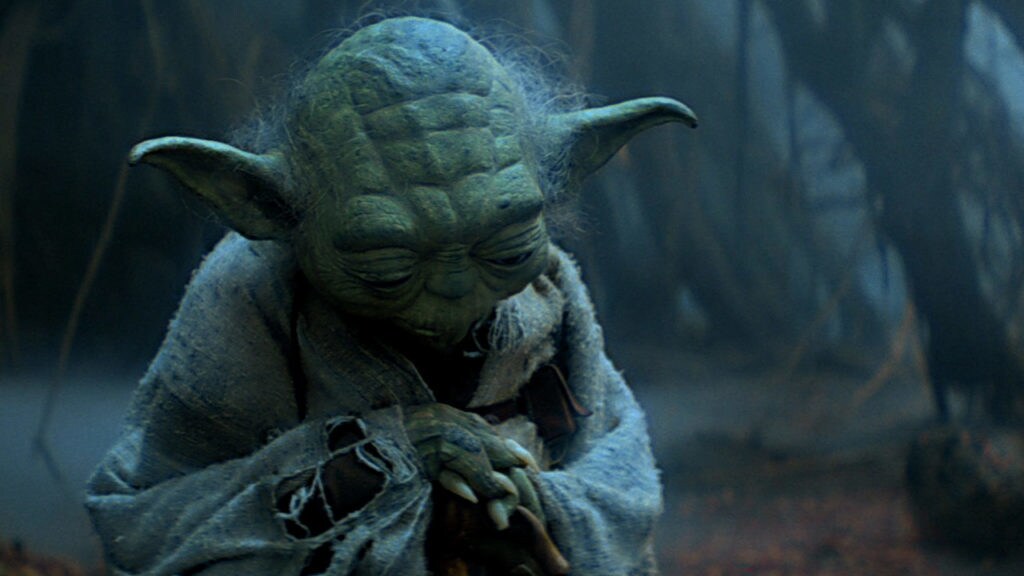 2. Stop focusing on the negative and commit.

“Always with you what cannot be done. Hear you nothing that I say?...You must unlearn what you have learned....Try not. Do. Or do not. There is no try.” -- The Empire Strikes Back

No list of Yoda's best lines is complete without the classic and infinitely useful meditation on the black and white nature of success and failure. But back up and it seems he's more specifically warning against undermining your own successes with self-doubt. Luke is positive he's never seeing his X-wing again after his shaky Force-wielding sends it plunging deeper into the murky swamp water. “You want the impossible!” he cries. We've all been there, farm boy.

But ever the patient teacher, Yoda demonstrates the error of Luke's thinking by effortlessly delivering the ship to dry-ish land with the wave of one tridactyl hand. “I don't...I don't believe it,” Luke exclaims.

Yoda may be infinitely even-tempered but even Jedi Masters have their limits, and he is having none of Luke's nonsense. “That is why you fail,” he says, in what would come to be known among future generations as the original mic drop. 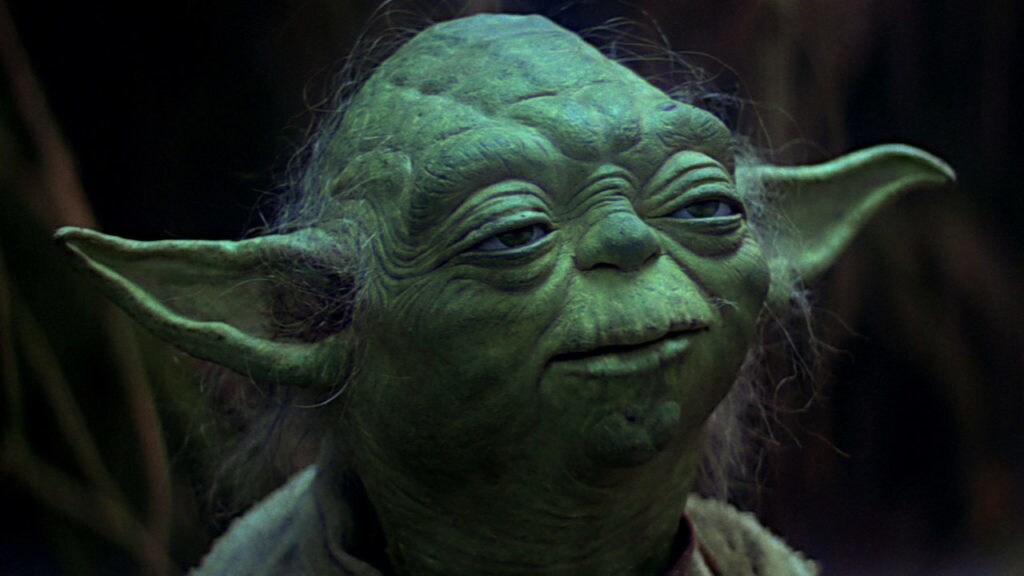 3. Also, you're not psychic. Quit trying to predict your fate and bend it to your will.

“Difficult to see. Always in motion is the future.”  -- The Empire Strikes Back

Rarely does life go exactly as planned, and that's OK. But if you convince yourself that you know exactly how this is going to play out, you're setting yourself up for certain failure. Just because you're delivered directly into the rancor's lair or the belly of a sandcrawler doesn't mean all hope is lost and your fate is sealed. Assess the situation at hand, figure out your options, and take decisive action. However, that doesn't get you off the hook on making terrible life decisions because...

“Your path you must decide.” -- Star Wars Rebels, “Path of the Jedi”

"Which way is the right way?" Ezra asks the ethereal advisor inside the Jedi Temple.

"The wrong question that is.” Here's the truth we all need to hear: Ezra's journey both literally in the temple and figuratively in his life are his to decide. Most of the time when you're choosing between two options, they both have pros and cons, but one thing is for sure: No one can make the decision but you.

We see this again and again when Yoda is chatting with the reckless young Skywalkers. When Luke is completely ready to ditch his training and undermine the entire Rebellion based on the murky predictions that his friends may be in trouble, Yoda adamantly warns him against acting rashly, but the choice is clearly Luke's to make. Which brings us to little gem, spoken as Luke prepares to rush headfirst into the Empire's trap in Cloud City: 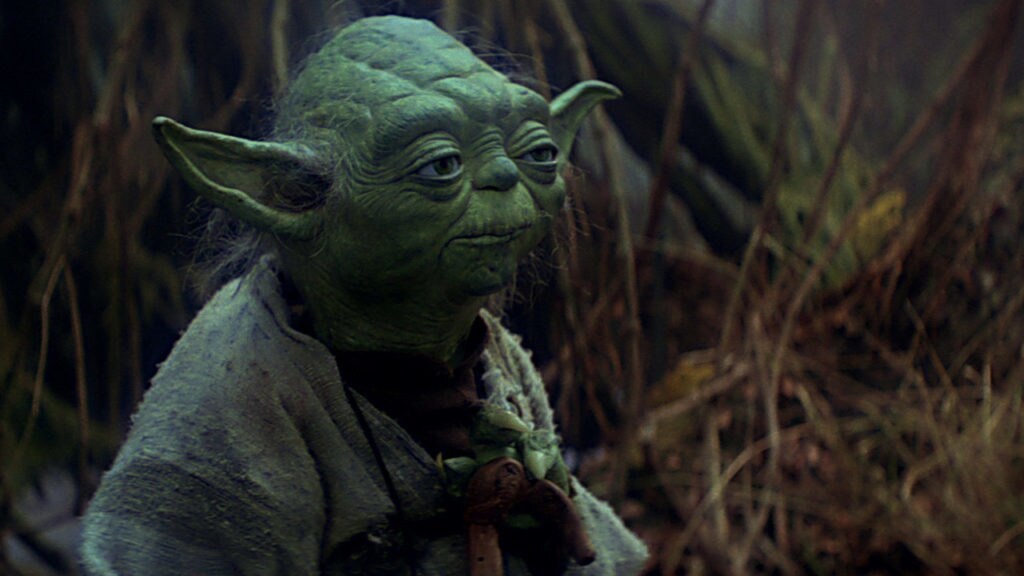 5. Quit being so selfish and impulsive, man.

“Decide you must how to serve them best. If you leave now, help them you could, but you will destroy all for which they have fought and suffered.” -- The Empire Strikes Back

Or as many a sighing parent has said — the world does not revolve around you! The Rebel Alliance is bigger than any individual person, Luke! Leia knows it. Han, even from the depths of his carbonite slumber, probably knows it. But Luke is still just learning that his decisions impact other people and sometimes he's not very good at weighing out all the factors. Where's C-3PO when you actually need him to tell you the odds?

Not even Obi-Wan Kenobi, back from the dead, can deter Luke from his bad decisions. “If you end your training now, if you choose the quick and easy path as Vader did, you will become an agent of evil,” Yoda warns in no uncertain terms.

“Patience,” Ben urges, probably feeling a bit like he and Yoda are entering a very difficult phase in co-parenting. For all his backward syntax, Yoda often proves to be the straight talker in the crowd. Is it really worth jeopardizing Han and Leia, Luke asks. “If you honor what they fight for, yes!” Yoda says. But Luke simply has not figured out how to... 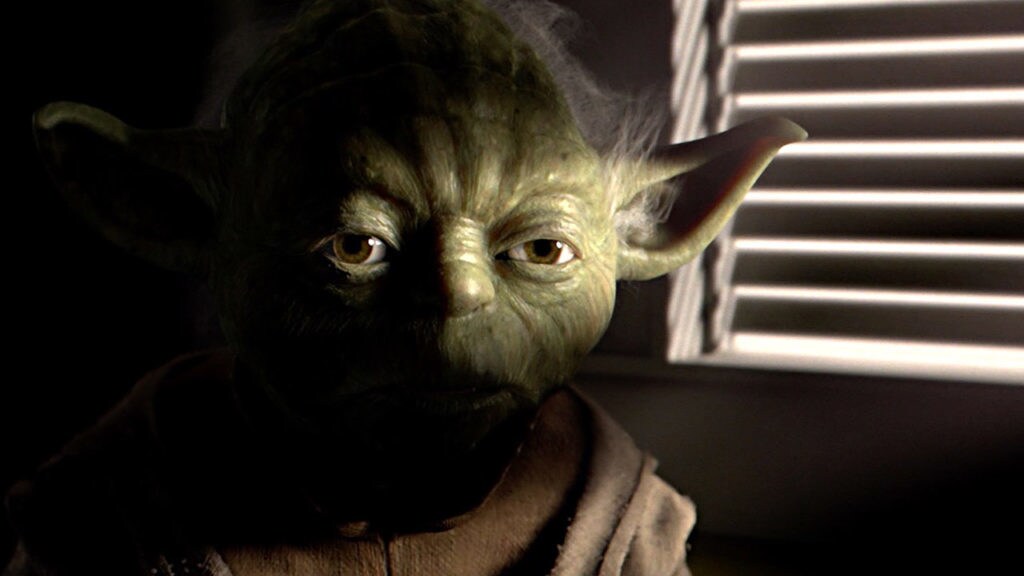 “The fear of loss is a path to the dark side. Death is a natural part of life. Rejoice for those around you who transform into the Force. Mourn them do not. Miss them do not. Attachment leads to jealousy.

The shadow of greed that is. Train yourself to let go of everything you fear to lose.” -- Revenge of the Sith

Worrying about what we can't control and clinging to what we think is ours is wasted time and energy. The only constant in life is change. “Luminous beings are we, not this crude matter,” as Yoda says.

Heavy stuff, I know, and it's about to get even more intense. Yoda originally delivers a variation on the theme to a pre-asthmatic Anakin, but he utterly exemplifies this life lesson on his deathbed. We see him, at the ripe old age of 900, ready to die. “Soon will I rest, yes, forever sleep. Earned it I have.” Luke, still clearly in need of some tutoring, tells Yoda that he can't go. Wrong again, kid. “Ah, strong am I with the Force, but not that strong,” Yoda tells him. “Twilight is upon me, and soon, night must fall. That is the way of things. The way of the Force.”

I'm not crying. You're crying!

But Yoda isn't quite finished dropping knowledge on his last Padawan. 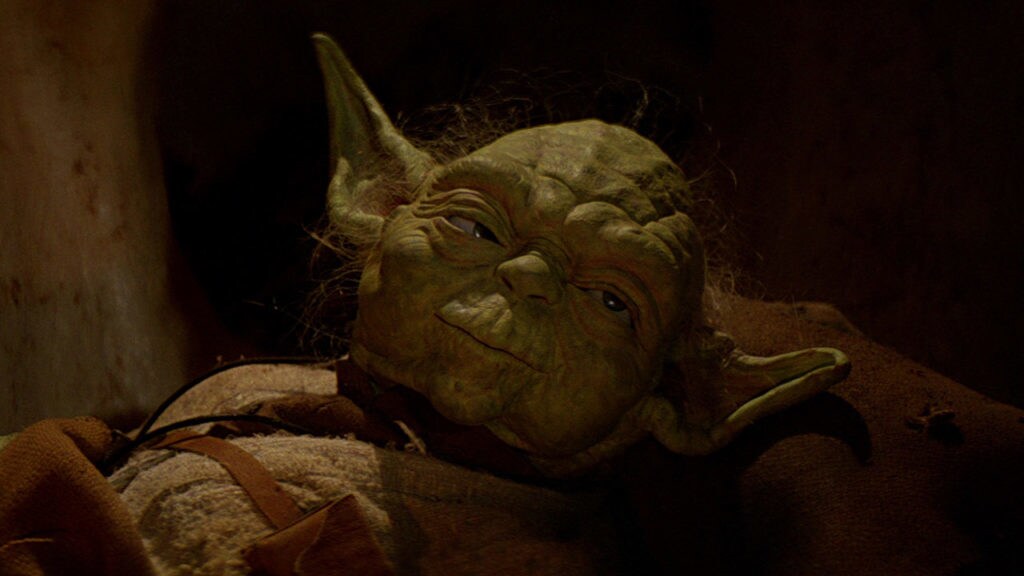 “Anger, fear, aggression. The dark side are they. Once you start down the dark path forever will it dominate your destiny.” -- Return of the Jedi

Yoda's advice tends to have a lot of applications and this evergreen, and twice spoken, wisdom is multifaceted. Basically, don't go full-bore evil and destroy a planet with your shiny new space station. Don't even give in to smaller infractions like lying about which pet consumed your homework this time. Because once you start rationalizing ways to bend the moral code and cut ethical corners, you're headed for trouble.

In the same vein, making decisions out of fear or anger is going to be a disaster. Seriously, Luke, go ask your father!

“Is the dark side stronger?” Luke asks.

“No, no, no,” Yoda assures him. “Quicker, easier, more seductive.” But as Yoda and Ben are both quick to point out... 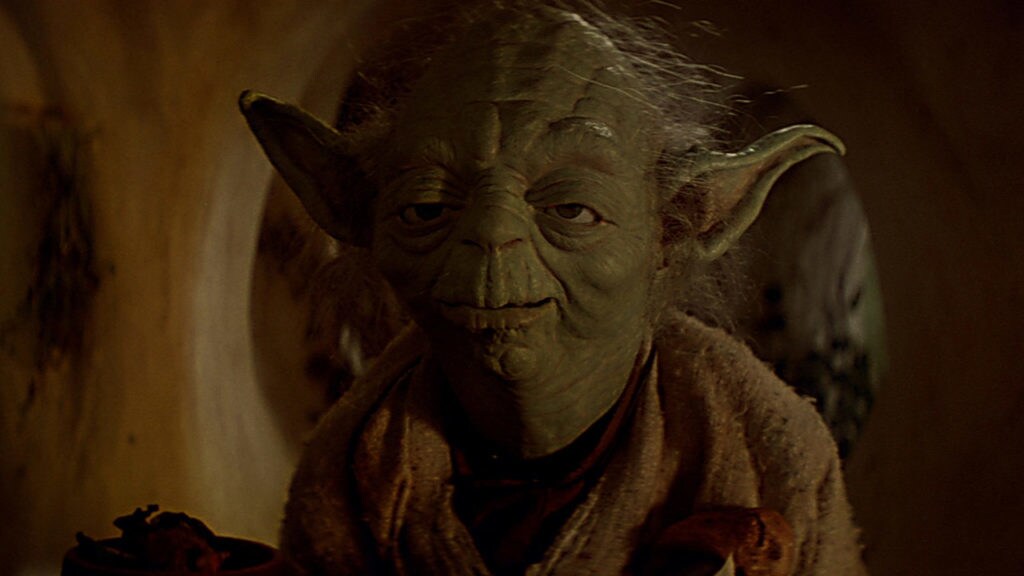 “Patience! For the Jedi it is time to eat as well. Mmm?”

“Patience! Soon you will be with him.”

“I cannot teach him. The boy has no patience.” -- The Empire Strikes Back

This sort of goes hand-in-hand with the bit about not being evil. The even-tempered but dogged pursuit of your dreams isn't going to be easy. You'll need persistence and tenacity. You'll need to realize that everything takes time. But it's the only way to learn and ultimately accomplish your goals.

Also, don't let yourself get hangry and irritable in the process. Take a break and try to relax. Life has a way of working out.