7 Reasons Why The Last Jedi Novelization is Essential

Jason Fry's excellent book is much more than an adaptation.

With Star Wars: The Last Jedi now available on Digital, Movies Anywhere, 4K Ultra HD, Blu-ray, and On-Demand, there’s never been a better chance to re-watch the latest adventures of Rey, Finn, Poe, Kylo Ren, and the porgs. And I’m sure as you watch and watch again, you might come up with some big questions or just random ones that might get hinted at in the movie -- but where can you learn more? Why, the New York Times bestselling novelization of The Last Jedi, written by Jason Fry, of course! 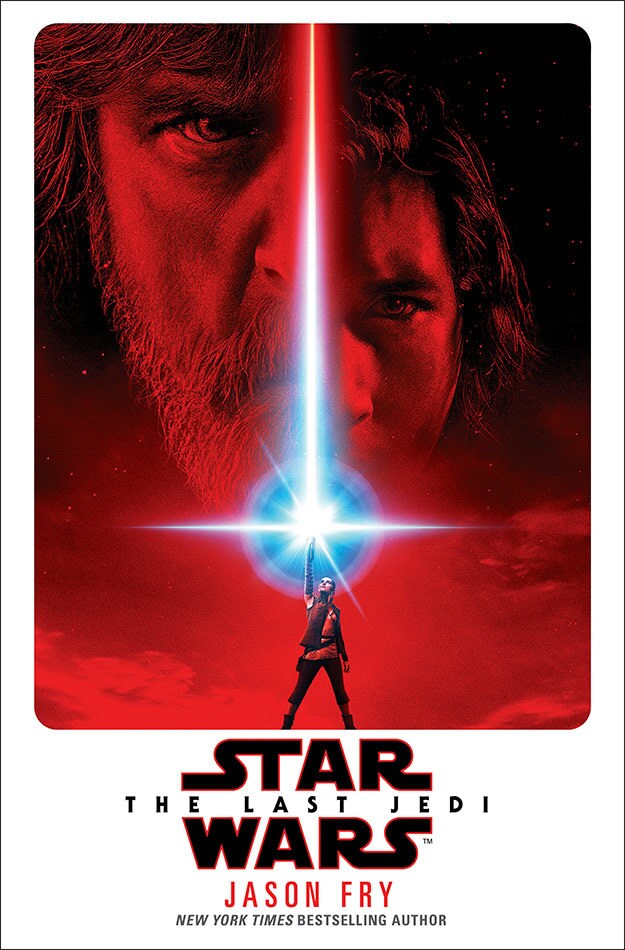 It's a great place to re-discover the story. Written with input from director Rian Johnson and including scenes from alternate versions of the script, the novel not only recounts the film but also adds onto it, giving a little more insight, while bringing in new scenes. Here’s a breakdown of some of the key reasons the novel should be on your must-read list. (Spoiler warning for the novelization!)

Remember when Luke wakes up and tells Rey that he’ll give her three lessons about the ways of the Jedi, and why the Jedi need to end? We see Rey learn what the Force is, and later on, Luke tells her that the legacy of the Jedi is failure. What about that third lesson, Skywalker? The novelization shows us that final lesson: that the Jedi way is not what the Resistance needs at this time. Upon seeing some approaching ships at sea, Luke tells Rey that a raiding party is coming to plunder the Caretakers, and Rey immediately decides to help save them, but Luke tells her that the Jedi way would be to do nothing, because if she responds with force, the raiders will return later in greater numbers and more violence, and she won’t be around next time to stop them. The Jedi are about balance, while what the Resistance needs is someone like Rey, ready to step in when there’s danger. As for the ships full of raiders, Luke might have stretched the truth, from a certain point of view -- Rey’s charge into battle ends abruptly as she realizes that it’s a traditional feast and celebration when the males of the Caretakers’ species return from a month fishing at sea.

We know from The Force Awakens that Finn is no pilot since he needs Poe to help him escape from the First Order, and yet by the end of The Last Jedi, Finn is strapped into a ski speeder, ready to defend Crait. Is the Resistance really that low on pilots that Finn and Rose are drafted into service? Indeed, but Finn’s gotten some flight time in before this mission. The novel provides a look at Finn getting a crash course in piloting from Rose as they journey to Canto Bight. But even more important than answering the question of where Finn learns to pilot is seeing more of the characters of Finn and Rose, and how their relationship grows. Plus, we see how much of a foulmouth Rose is!

Luke Skywalker has been in hiding on Ahch-To for years, not using the Force, but simply waiting to fade away, and take the Jedi Order with him. But then he shows up on Crait, full of the Force, ready to take on the First Order all by himself. What changed in his thinking? Just after Rey experiences Kylo Ren’s side of the story about that fateful night when Luke entered his hut so many years ago, Luke goes out to meditate -- and opens himself back up to the Force (which is what awakens Leia from her unconscious state). While Rey journeys into the cave under the island, Luke searches the island for her -- to tell her she was right, and that he’s going to join her, only to find her in her hut, touching hands with Kylo Ren. After his fight with Rey, he bares the full story of the night he went to Ben Solo, and she offers him the lightsaber one last time, but Luke doesn’t accept it. Not because he doesn’t want to go help the Resistance, but because her mission is now to turn Kylo Ren, not to fight him. But in opening himself up to the Force again, Luke not only sensed the power in Rey, he sensed another, and called out to her -- his sister, Leia.

4. From many points of view.

While much of the film follows the characters through their journeys, the audience doesn’t always see inside the heads or hearts of the characters. Jason Fry delves into the minds of a variety of characters, seeing the universe through their point of view and sharing their feelings and aspirations. From BB-8 trying to bypass Black One’s operating protocols in order to repair the X-wing to General Hux dreaming of ruling the First Order with the older Imperial officers and Kylo Ren out of the picture, the novel gets inside the characters’ heads. Some scenes are experienced very differently from a different point of view than seen in the film -- for instance, the holocall with Maz Kanata is told from Maz’s end of things, as she tries to read into the eyes of Finn, Poe, Threepio, and Rose. Speaking of Rose, many times we see through Rose as she experiences more of the galaxy, and relates it to her lost older sister, Paige. From Tallie to TIE pilots, from DJ and Holdo to Leia and Snoke, we experience the movie from the thoughts and feelings of those in it.

If you were thinking that not much happens between The Force Awakens and The Last Jedi, Luke Skywalker might tell you that every word in that sentence is wrong. There’s a prologue and more than two chapters full of story that pick up just before the beginning of the movie. Luke ponders the meaning of a dream in which he has reached old age on Tatooine under a long-lasting Empire, with his old crush, Camie, in a timeline where Luke had returned the missing droids to the Empire. Leia reflects on her role as the center of the Resistance as she hosts a memorial for Han Solo for her forces amid the evacuation preparations. The sisters, Paige and Rose Tico, get a moment to themselves, as they realize they’ll be fighting the next battle, no longer together aboard the same bomber, Cobalt Hammer, but with Rose aboard the Ninka on its way to help evacuate D’Qar. And finally, the evacuation effort overseen by Kadel Connix and PZ-4CO proceeds just as Hux and the First Order arrive, and Poe has an idea to help delay the First Order’s inevitable attack.

6. The lighter side of the Force.

Need another key reason to read the novelization of The Last Jedi? How about the sheer entertaining quality of Jason Fry’s writing! While Star Wars is about action and good versus evil, the novel also includes other vital ingredients that make a great Star Wars story, like humor, romance, and just plain cool things. By getting into the minds of different characters, we see different points of view, and sometimes the humor in even the most somber situations. After Finn’s first encounter with Rose leaves him stunned, Fry writes, “Apparently Finn’s new thing was waking up completely confused.” Rose and Finn’s adventures on Canto Bight create quite a few fun scenes between them, including one where the two bicker about which way to go in the sewer after they escape from their jail cell. Through their interactions, we learn a lot about Rose’s reassessment of Finn from the hero who was fleeing the Resistance as a coward to a man completely devoted to Rey, to someone she loved and felt that she needed to watch over (and eventually save). And Finn gets his share of moments too, including a hilarious close call aboard the Supremacy when an old First Order acquaintance recognizes him. Plus there’s a certain humor in realizing that all of the leaders in the First Order secretly (and perhaps, not so secretly) hold each other in total contempt and disdain. And of course, BB-8 has his share of misadventures, ambushing Canto Bight police in the jailhouse and trying to remove that trash can disguise.

How do the Resistance transports stay hidden from the First Order’s sensors? And how does DJ know how to find those hidden transports when he sells the Resistance out to Hux and Phasma? What does Rey think about Chewbacca allowing all those porgs aboard the Falcon -- is it a home for them, or a larder for the Wookiee? How does the First Order’s hyperspace tracking work? It’s in here. Plus find out how Poe’s mutiny helps Holdo in her final actions, or what the Caretakers thought of Luke and his slightly destructive apprentice after they both were gone. Plus, Rose shows off her thorns when she bites someone who deserves it. Who? Better get the novelization of The Last Jedi to find out!