Empire at 40 | 7 Little-Known Facts about the Making of Star Wars: The Empire Strikes Back

From early script changes to mistaken action figure identities, unlearn what you have learned with these obscure factoids.

Many Star Wars fans consider Star Wars: The Empire Strikes Back to be their favorite of the Skywalker saga, and have dissected and discussed its themes, scenes, lines, and even backgrounds for 40 years. There are a lot of stories from behind the scenes of the film, like the tale of the development of Boba Fett’s costume, which was first conceived not for the movie but as a character to do public appearances, to take pressure off of Darth Vader appearances. But there are still a lot of little-known bits of trivia. So grab your popcorn and see if you've heard these morsels of making-of knowledge. 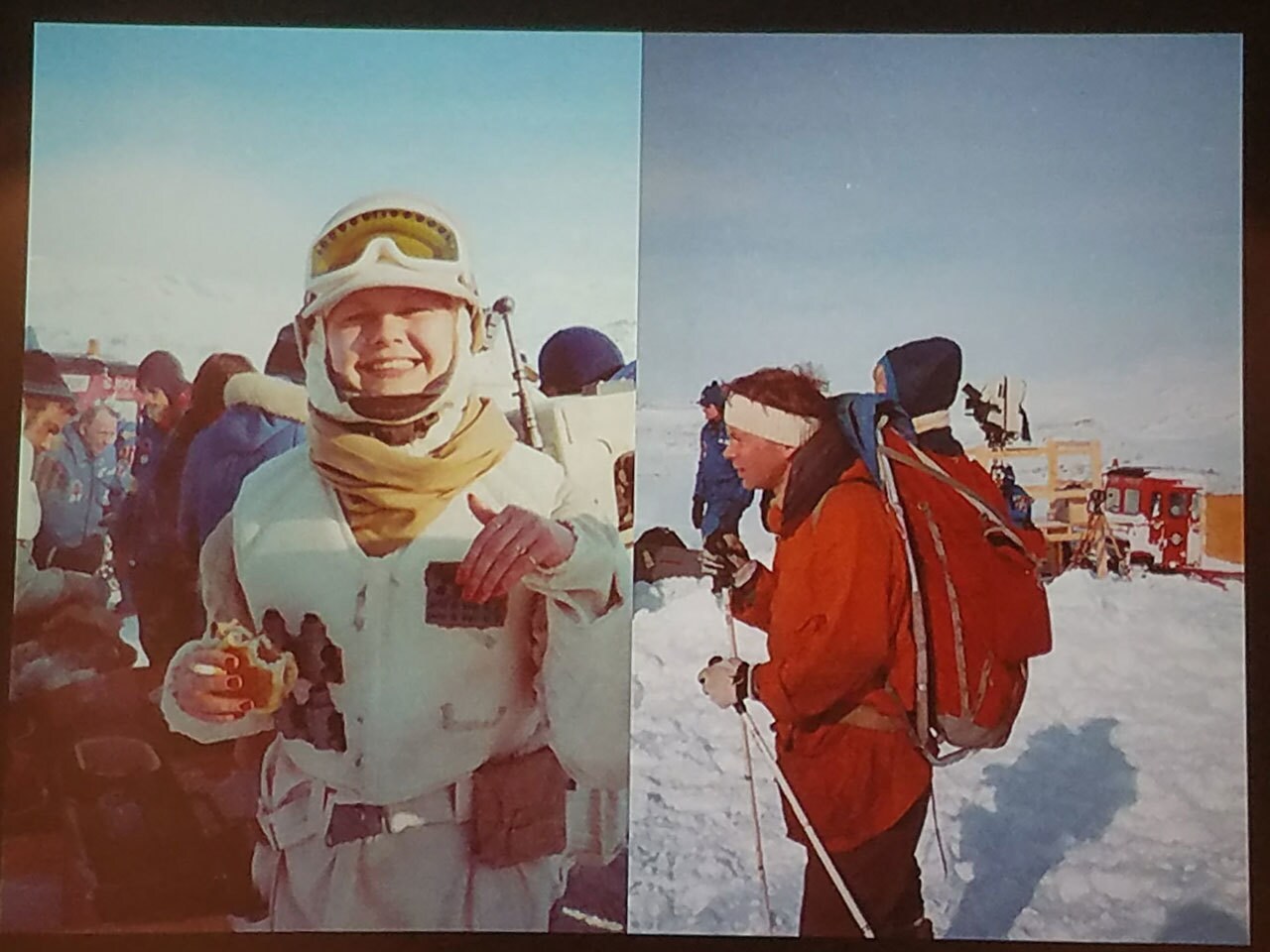 1. There were women in the trenches.

According to Alan Tomkins, who was nominated for an Academy Award as the art director for The Empire Strikes Back, several women played rebel troopers in the trenches and snow-covered plains for the Battle of Hoth. Personal photos taken by Tomkins show several extras showing off their nail polish in between takes, filmed on the Hardangerjøkulen (Hardanger Glacier) above Finse, Norway. While a call for extras drew a handful of interested Norwegians -- imagine not enough people showing up to a call for Star Wars extras today! -- eventually more rebel troopers were needed, and even some members of the staff of the hotel in Finse were drafted into the Rebel Alliance. 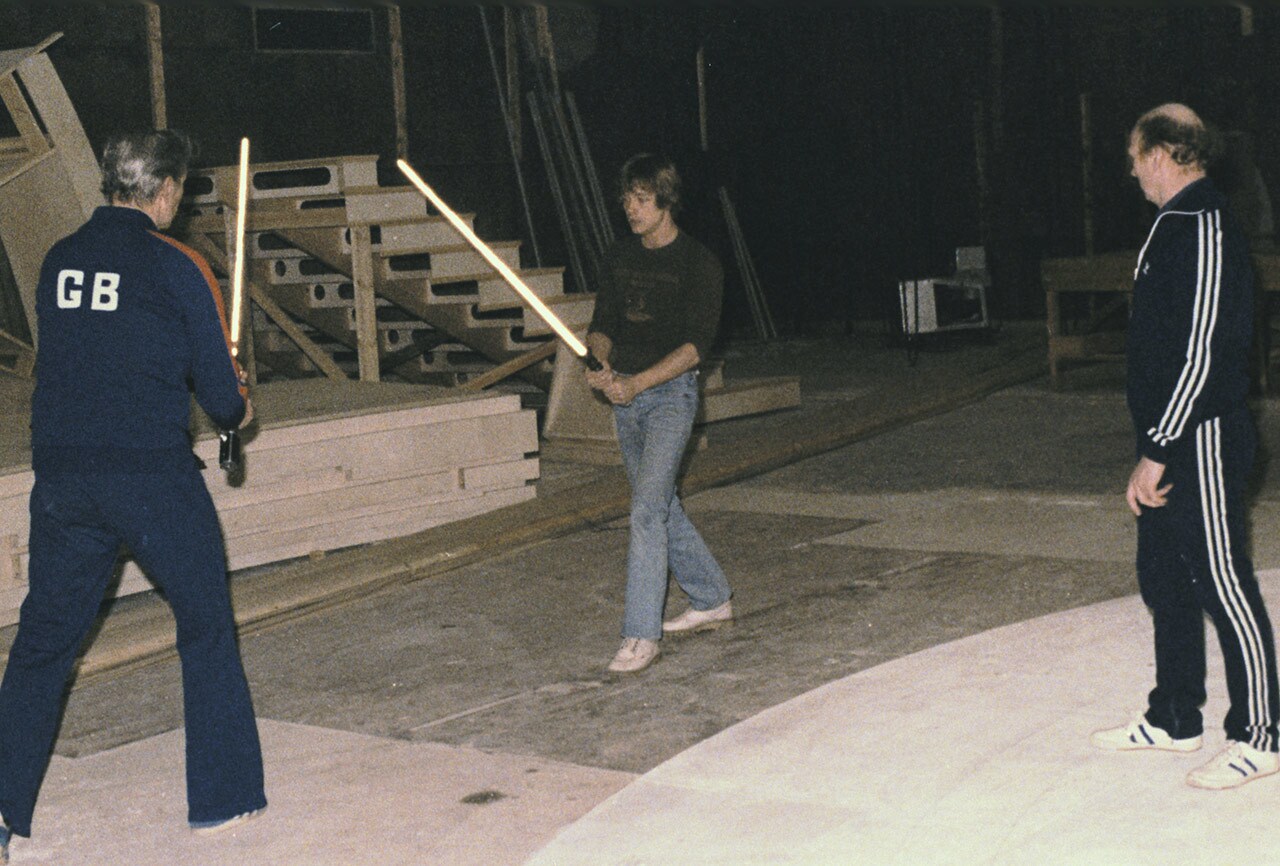 In the development of the Jedi training scenes on Dagobah, Luke Skywalker engaged in some exercises with a lightsaber. The original Jedi training montage had two different lightsaber practice scenes, as shown in storyboards by Ivor Beddoes and left in the shooting script until July 23, 1979, when it was decided to cut them. In the first scene, Yoda would hop off Luke’s head, then toss a metal bar at him, and Luke would have to slice it in mid-air with his lightsaber. First, Luke would fail, but later succeed in cutting the bar into several pieces. The second scene would have Luke training with several balls, similar to his training with Obi-Wan Kenobi aboard the Falcon in A New Hope, or Rey’s training in The Rise of Skywalker, only he would have to handle several at once. In an earlier draft of the script, Luke would also face the training droids inside Yoda’s hut, using a pot lid and a spoon to deflect their blaster bolts. 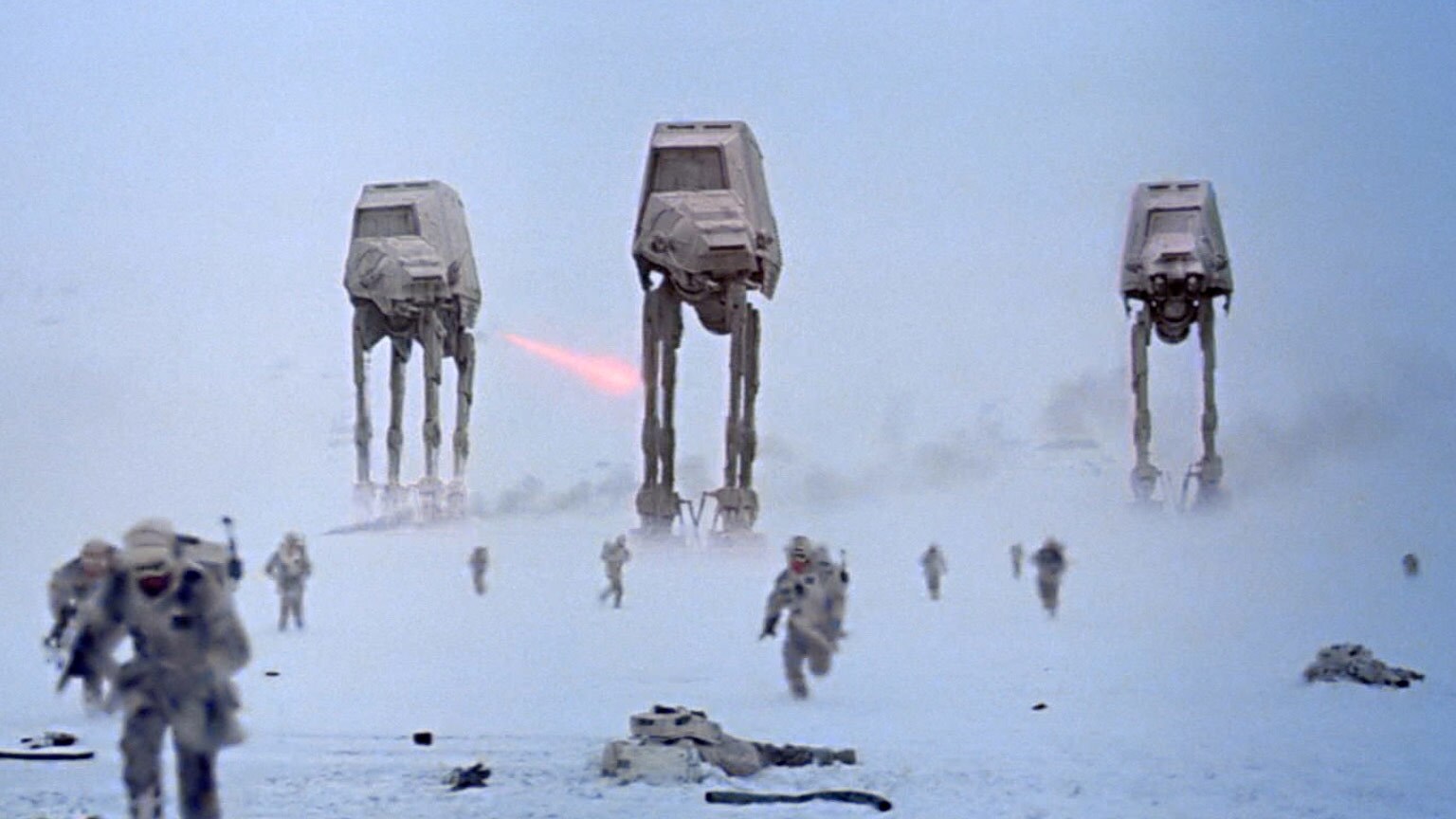 3. A different kind of Imperial March.

You might know that some of the sounds of blaster fire were made from the twangs of metal guy wires, as recorded by Ben Burtt, but do you know where the Imperial walkers get their distinctive mechanical marching sound? The mechanical sounds of AT-AT marching were captured by giant sheets of metal being cut apart and stamped at two metal-working sites in Oakland, California. “I spent quite a bit of time recording metal shears, giant machines that cut sheet metal into segments,” recounted Randy Thom, sound effects recorder. “They were useful because they have this multisyllabic sound. In order to come up with a really convincing, compelling sound for the walker’s motion, Ben knew that we would need these multisyllabic mechanical sounds on a very large scale.” Burtt added, “The objective was to give the walkers a real sense of mass and weight. Randy went out and recorded some of those big metallic stamping machines. Then I picked out parts of the recording I liked and made it into a rhythmic walk cycle. In addition, I needed squeaking sounds, like a knee joint. That I achieved by playing with a dumpster lid, which had been dropped off in front of my house.” 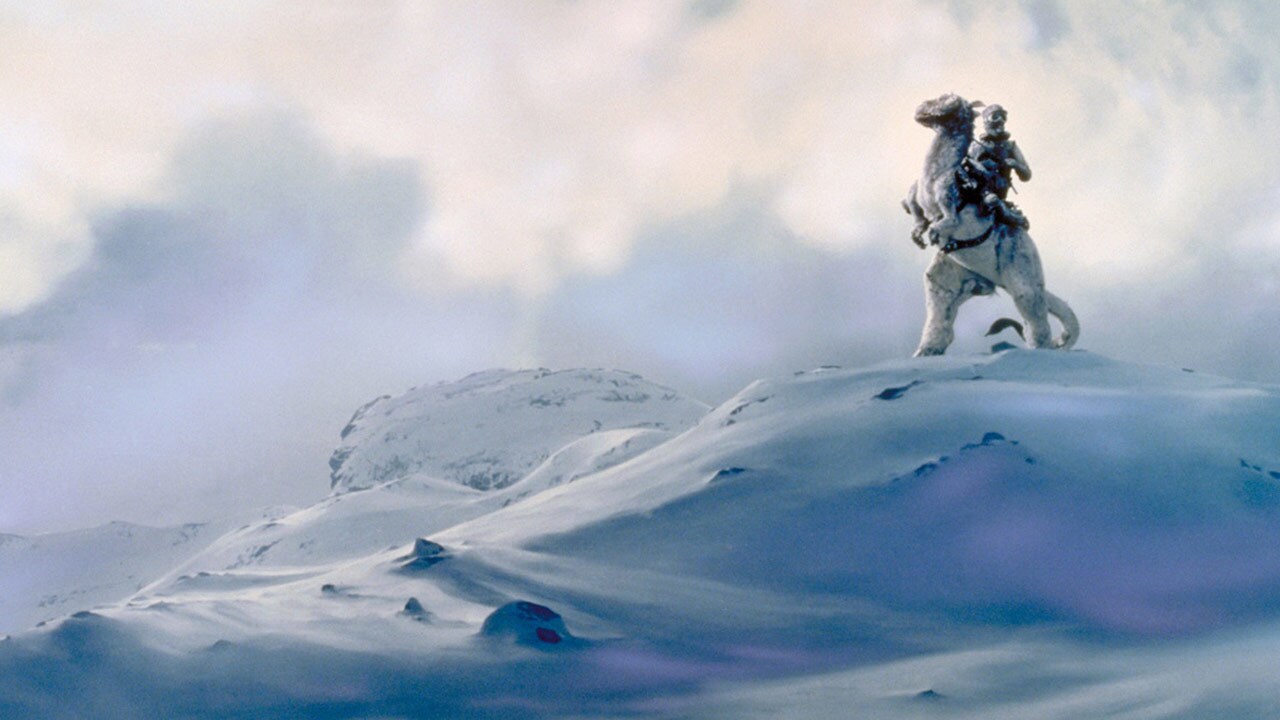 In the early screenplay drafted by Leigh Brackett for The Empire Strikes Back, the ice planet wasn’t called Hoth, but the cloud planet that became  Bespin was. “I think the names means ‘cloud’” Han remarks in the screenplay. There on the cloud city, Han and Leia (who is using the alias Ethania Eredith to keep her real identity hidden) meet with Han’s old friend, Lando Kadar, who then introduces them to his old friend, Bahiri, chief of the White Bird clan of the Cloud People. Later, Vader comes to Hoth and when stormtroopers kills Bahiri, Lando decides to switch sides and join the heroes. When Luke and the Millennium Falcon flee the cloud world, the rebels find sanctuary on Bespin Kaalida, a jewel-like planet. The second draft screenplay, written by George Lucas, changed the ice planet to Hoth, the cloud planet to Bespin, Lando Kadar to Lando Calrissian, and cut the Bahiri subplot. 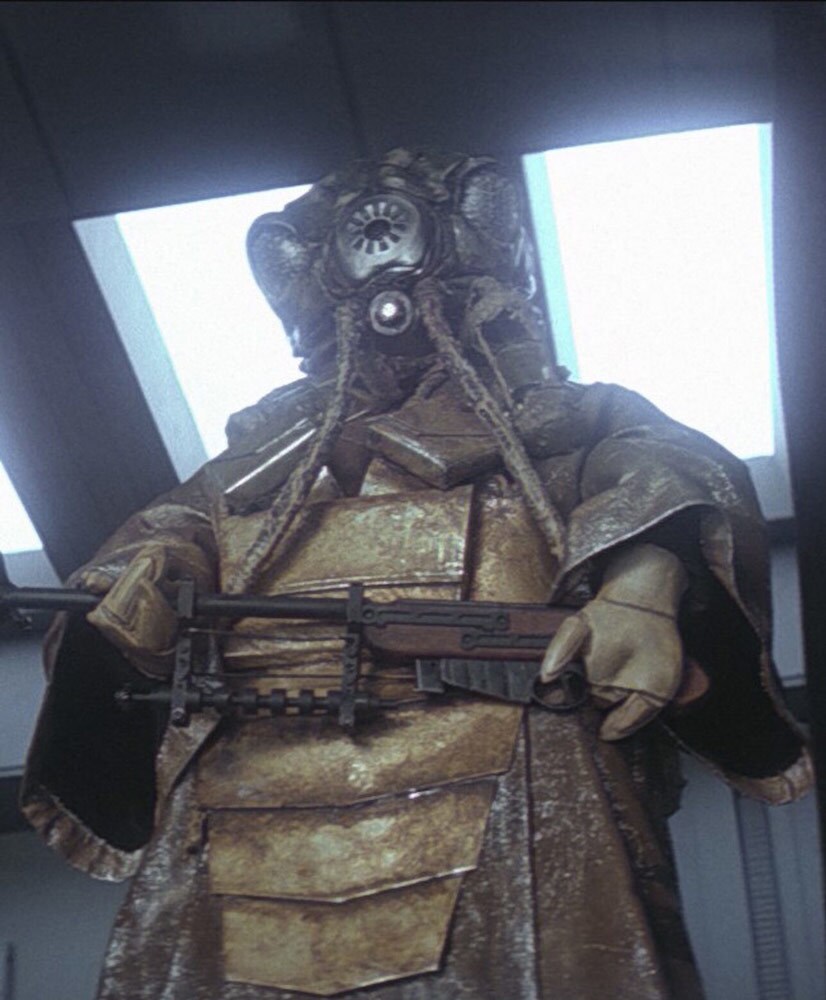 Fans who collected the original action figures might recall that Kenner  swapped the names Zuckuss and 4-LOM for the toys made in 1980, but Zuckuss almost had another name as well -- Tuckuss. Luckily for this bounty hunter, his name was changed from sounding like Tuchus, the Yiddish word for a person’s rear end, to using a Z. His name on the call sheets for the film shoot? Lobster Head. Take that, Therm Scissorpunch! And the costume for Zuckuss used a space age material -- the interior of his eyes was made from a material that became popular in packaging in the 1960s -- bubble wrap!

6. Taking a dip in the maker's backyard.

While most of Dagobah was filmed on a set built on the Star Wars stage at EMI Elstree Studios, one part was filmed closer to home for George Lucas. The scene where the dragonsnake (known as the bog creature to the crew) rises through the muck was filmed in the foundation of George Lucas’s own swimming pool as a pickup shot. Speaking of pickups, a pick-up truck was used to transport the bog creature to its murky set. Because they needed a darker shot than the bright California sun was giving them, the pool was rigged with a diffuser screen over the top, and two scuba divers manipulated the bog creature prop for filming in the muddy water.

While almost everyone knows that Frank Oz provided both the puppeteering and voice for Yoda, the diminutive Jedi Master, actor Peter Mayhew had his own bit of puppet work while inside his Chewbacca costume. For a scene where parts of C-3PO were to be actively moving while the droid is on the Wookiee’s back, the original plan was to use a motorized prop to move the arm and turn the head. As director Irvin Kershner has said, “I didn’t want just a dead robot there. So they had motors in the head and arms. Forget it! It looked like he was drunk, the way it was moving. I said, ‘We can’t shoot that.’ The prop man says ‘Give me ten minutes, I think I can fix it.’ When we came back, the arm was flailing around and the head was twisting and turning and it was wonderful. I looked up, and saw the prop guy running along beside it, way out of frame, with a very long fishing rod and a nylon wire going down to the arm. There was more wire from the head to each hand of the Wookiee, so as Chewbacca moved his hands, C-3PO’s head turned. That was the way it was done. Cost: zero.” Not bad for a big furball.

Empire at 40 | From a Certain Point of View: The Empire Strikes Back Audiobook Cast Revealed - Exclusive