StarWars.com talks with producer Orion Kellogg about why this new DLC is a must-play.

With major gameplay enhancements (including thrilling duck-and-cover shooting, dubbed Blaster Battles), smart puzzles (who knew Maz's castle had that many secrets?), and legitimately funny jokes peppered throughout (Kylo Ren's bedroom covered in Darth Vader posters being a personal favorite), LEGO Star Wars: The Force Awakens isn't just a great LEGO Star Wars game. It's one of the great modern Star Wars games altogether. And now it's expanding with Poe's Quest for Survival, new DLC available today for console versions of the game. This is no mere bonus level, however; this is a significant addition that tells how our favorite Resistance pilot survived his crash on Jakku, and is complete with a chase through previously unseen areas on the desert planet, a Blaster Battle sequence with its own unique feel, and the introduction of some charming new friends and deadly foes. StarWars.com played through the DLC and then caught up with producer Orion Kellogg, discovering some behind-the-scenes details and six reasons why it's essential.

1. It tells an important, authentic story. The springboard for Poe's Quest for Survival was some basic info from the Force Awakens novelization about how Poe got back to the Resistance. By taking the book's morsels on how he survived, the game designers were able to craft their own adventure tale and further develop the world of Jakku. "For this story, an awfully thirsty Poe Dameron is found in the Goazan Badlands by the Blarina scavenger Naka Iit," explains Kellogg. "Naka escorts him back to Blowback Town so he can touch base with the Resistance. That's about all we know from the book -- so we had a great time asking ourselves questions about what that journey might have looked like."

2. It further establishes what kind of place Jakku is. While there's another famous desert planet in Star Wars, Jakku is much different in terms of culture and population. "This was very important for us to reinforce with our audience: Jakku is its own character and it has its own rich history," Kellogg says. "Rather than farms and dusty old cantinas, Jakku's economy has sprung from the valuable wreckage strewn about the surface left over from the Battle of Jakku." As such, it has settlements like Blowback Town that risen around the "junk" economy -- as well as baddies like the Strus Clan, who try to squeeze the hardworking townspeople. "The Strus Clan is a crime syndicate that shakes down vulnerable travelers on the road between places like this," Kellogg explains. "If Teedo or ripper-raptors doesn't get to them first." All these elements combined to inform gameplay, action set pieces, and character abilities. "We presume Naka has dealt with the Strus Clan before and that he's a capable survivalist," Kellogg continues. "Hence, players will find that he's excellent using his desert speeder's mounted turret. No one, of course, is a better pilot than Poe -- but Naka is able to guide him ably through the Strus Clan traps and Jakku's dry, dusty chasms." Plus, remember those sinking sands that Rey warned BB-8 about? You'll have to avoid them in the level's don't-blink speeder chase.

3. Who talks first? Oscar Isaac! Being that this is a Poe story, it would only be fitting that the man himself voice the role. Poe's Quest for Survival features all-new dialogue recorded by Oscar Isaac just for the level.

4. It's like a mini-Western in the middle of a LEGO Star Wars game. Once you get to Blowback Town, you'll find that the Strus Clan has essentially taken over. You're more or less playing as Cowboy Poe, and it's a very fun use of the character and twist on the LEGO Star Wars experience. "Blowback Town itself is no stranger to frontier trouble spilling onto its doorstep, so we thought it would make sense to take heavy inspiration from Old West boom towns -- and that the Strus Clan should take inspiration from Old West bandits," says Kellogg. "You'll see wide-brimmed hats and high-tech ventilators to help with the desert air atop tanned leather costumes for the same practical reasons you would in a spaghetti Western."

Like any good cowboy, Poe helps to clear the outpost of scum and villainy. The resulting Blaster Battle appropriately feels like a shootout from Westerns of yesteryear, as well as the carnival games influenced by them. "For the combat," Kellogg says, "we wanted the Blaster Battle to feel like an amusement park shooting gallery: bandits on balconies, a gunfight in an old saloon, civilians taking cover behind barrels, and feed troughs with Star Wars touches, like hungry happabores for good measure." 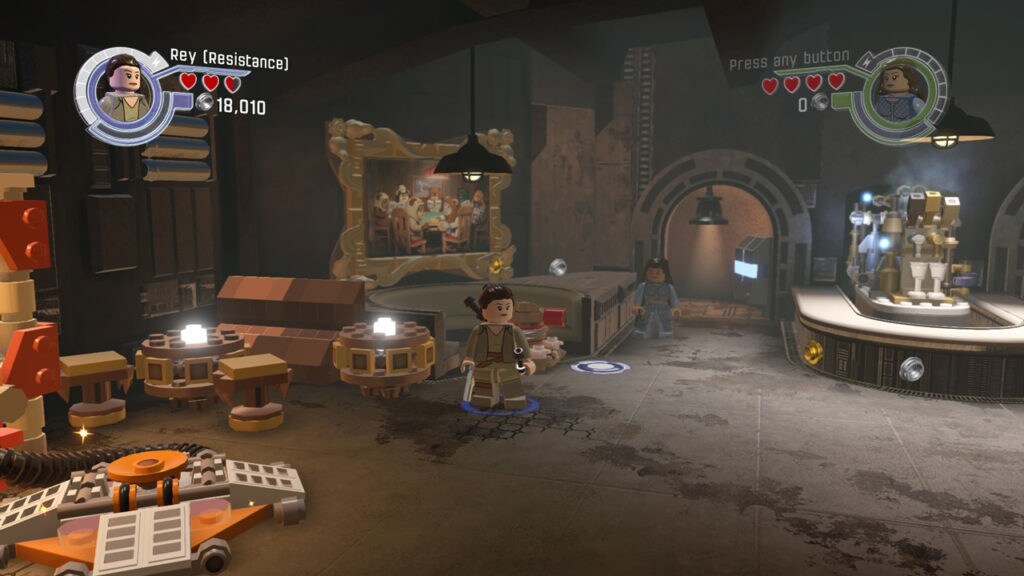 5. Let the Easter egg hunt begin! What would a LEGO Star Wars game be without some in-jokes and hidden surprises? Poe's Quest for Survival is no exception. Mosey on into Blowback Town's cantina and you'll spot a claw machine (with Yoda and Chewie toys as prizes!), a painting of Ewoks playing cards (which is maybe the greatest thing ever), and who knows what else. "You might even find a way to cool off with some ice cream behind the bar if you play your studs right," adds Kellogg.

6. You'll love Poe (even more) and his new friends. For all the action and clever humor, what's maybe most impressive here is the complete story told and character development. Poe remains the hero we all love -- friendly to everyone, never letting the situation get him down. Naka, likable from the get-go with his exuberant personality, moves from being suspicious of his stranded companion to totally impressed; the fact that you play as both heroes only adds to the player's understanding of that evolution. When it's all over, there's a genuine friendship there -- and a new appreciation for Poe and Jakku. "After playing the level, we hope fans come away with a better understanding of the Jakku environment, the sorts of creatures and outposts you'll find there, an appreciation for the resourceful Blarina people, and reassurance that Poe Dameron is just as good a gunfighter as he is a pilot," Kellogg says. "Well, almost. He's one helluva of a pilot."