When we saw the preview trailer for the second set of Forces of Destiny animated shorts, we did not expect Sabine and Jyn's first meeting to go anything like this. Sabine is a rebel on a mission carrying a (probably stolen) map when it falls -- literally -- into Jyn Erso's hands. But our favorite reluctant rebel is still a loner at this point, so even though the information looks important, and soon attracts the unwanted attention of a couple of stormtroopers, she hasn't exactly signed up to fight for the rebel cause just yet. It's a tense encounter, but a moment that reminds us the importance of empathy and authenticity.

Here are five highlights from the short, “Accidental Allies” — which you can watch below!

Karabast! No wonder most rebels hide their precious maps and intel inside trusty astromechs. Handheld devices are no match for darting across rooftops in some kind of galactic form of parkour. 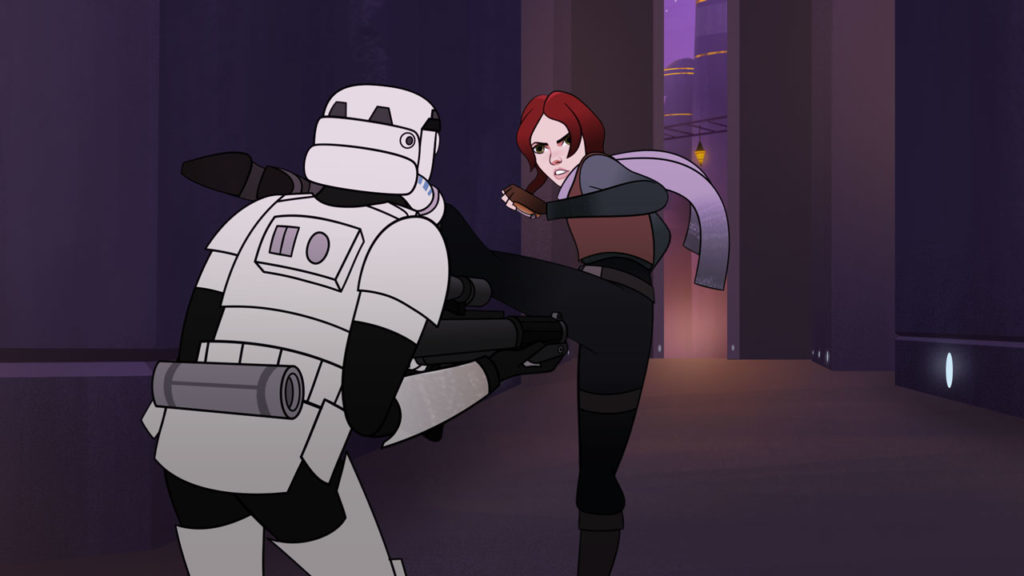 2. Suspect is not considered dangerous.

I mean, sure, unless you consider getting a flying kick to the face a good time that poses no risks whatsoever! But don't underestimate Jyn Erso. Sometimes we forget just how many cool gadgets Sabine has tucked away on her Mandalorian armor. Case in point: that stalk on the side of her helmet is more than just a decoration. On the end, a handy target rangefinder helps her get a closer look at a safe distance.

4. The enemy of my enemy is my friend.

Jyn's cornered and the stormtroopers she left flat on their backs have reinforcements on the way. Good thing Sabine isn't waiting around to find out if she's friend or foe. She just needs to keep those bucket heads from getting their mitts on her map! 5. Found someone, you have!

Equally matched in stubbornness and distrust, our two heroes aren't exactly best pals upon first meeting. Experience has taught them both to be cautious, and they remain at odds until Sabine reaches Jyn with something stronger than brute force -- empathy and honesty.

What were your highlights from “Accidental Allies”? Let us know in the comments below!

Quiz: Whose Mandalorian Armor Are You Getting for the Holidays?

Tooka Dolls, T-16s and More Toys in a Galaxy Far, Far Away