Rogue One introduced Star Wars fans to a whole new team of heroes, some of whom were rebels before becoming rebels -- and fans wanted to know more about these new characters. Now, Jyn Erso, the central heroine of Rogue One, has her story fully explored in Star Wars: Rebel Rising, a young adult novel by New York Times best-selling author Beth Revis. Released earlier this month from Disney-Lucasfilm Press, Rebel Rising shows the reader how Jyn Erso became the person she was in Rogue One as it covers the years from when she left Lah’mu with Saw Gerrera to when she is rescued from the Imperial labor camp on Wobani. While the movie hinted at her history, Revis has taken those clues and has crafted a tale that builds up Jyn from child to adult, through the twists and turns of her life. Think you have a feel for her character just from her history with her parents and Saw? Guess again!

StarWars.com sat down with Beth Revis at Star Wars Celebration Orlando to take us behind the scenes on the making of Jyn Erso’s story, the tale of a rebel who persisted against all odds. Here are five details we uncovered. 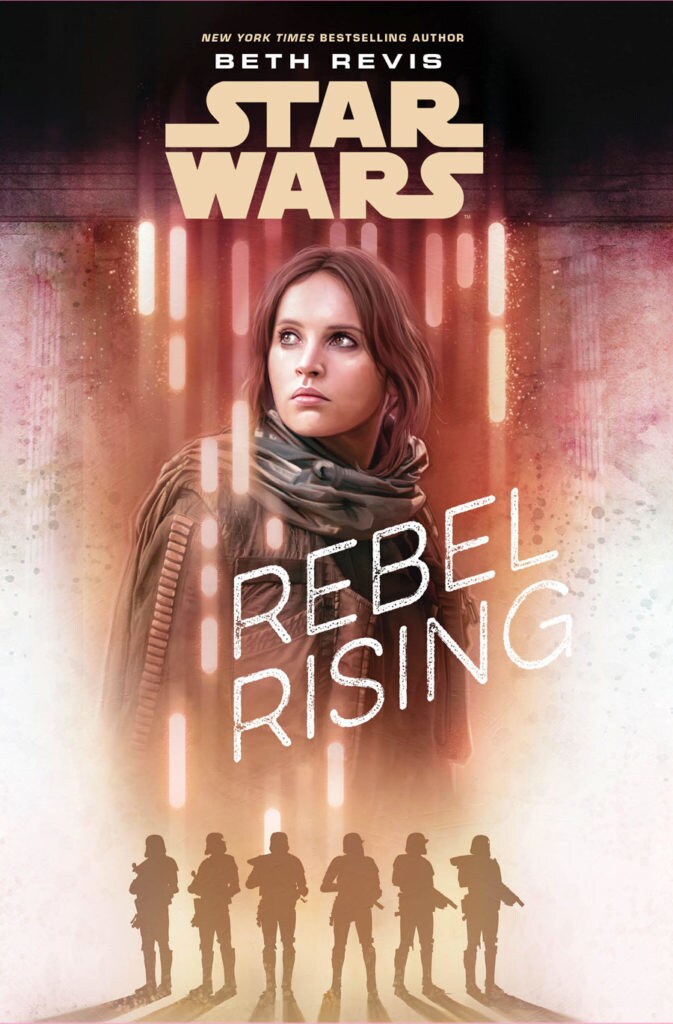 1. Rebel Rising covers it all. “If you’ve seen the movie Rogue One, there’s the moment when Jyn Erso is a child then it flashes forward to when she is in prison,” Revis explains. “The book is the flash forward -- everything that happens from when Saw Gerrera picks her up to the moment that she is seen in jail.”

From the movie, we get a couple tidbits of what happens to her in the meantime, working her way up the ranks in Gerrera’s outfit, and getting abandoned when Saw feels that others are onto her true identity, and eventually being arrested and charged by the Empire for numerous infractions worthy of being sentenced to hard labor. “It was fascinating working with Jyn,” Revis says, “because I was able to pick up pieces of who she became and try to backtrack and go to where and how she became that kind of a person. That’s really where the story originated: picking up those flashbacks and little pieces of dialogue, like where she says that Saw abandoned her, and then explaining how that happened.”

2. A sharpening Saw. With much of her younger years being raised by the insurgent Saw Gerrera, Jyn learns a variety of skills that will help her survive -- combat training and document forgery, but their relationship is more than just mentor and student. “You know that he calls her a daughter, and he sees it that way,” states Revis. “But obviously she has some baggage that goes along with it, because it’s not Star Wars if there’s not daddy issues. So there’s some issues in that relationship -- they definitely were close for some time.”

With Gerrera continuing his crusade against the Empire, he’s not exactly cut out to be a normal parent, and while he helps her learn many practical skills, there’s a lot of other life lessons that she’s learning that her adoptive father may not be intending to teach. Revis explains Jyn’s growth: “Part of it is learning how to trust again because we see in the beginning that there’s a pretty big betrayal as a child that she sees and witnesses with her father, and then she’s with Saw and, obviously if you’ve seen the movie, you know that that relationship turns sour. So her learning who to trust is a huge part of who she is as a person and you can see echoes of that in how she interacts with people in Rogue One. That’s really the basis of her relationships and how she became who she is.” 3. That’s only half the story! While she spends a good chunk of her younger years with Saw Gerrera, there’s also a quite a few years where she’s starting her life over again without him and without being involved in the fight against the Empire -- and that’s a great blank slate for a storyteller. Jyn crosses paths with many other characters, and Revis excitedly hints at one of the key figures in Jyn’s late teens. “I think my favorite character is someone who is only introduced in the book. His name is Hadder and I really enjoyed writing him. He is someone who came late to the story but I think he’s my favorite character. You’ll have to read the book to find him, but he’s fantastic -- I love him!” Hadder is many things that Jyn is not: someone who has had a relatively normal, if sheltered, upbringing, and their relationship gives Jyn a glimpse of the life that she has never had in her years in hiding from the Empire.

In addition to new characters figuring prominently into Jyn’s life, there’s plenty of new worlds to explore as well. “You definitely see some places that have been established in Star Wars,” Revis enthuses. “They go to some familiar planets, and they go to a few new planets that I’m really, really proud of, and I feel lucky that I was able to write them. My favorite is a planet called Inusagi -- it’s a world that is similar to Naboo but has different influences. It also has some different creatures that I was able to invent. It was so fun to write. And I didn’t even have to worry about how they would come to life, because it’s a book, so I was able to do whatever I wanted to. They’re a very unique kind of creature.”

4. Erso, I thought. Revis shares about getting into Jyn Erso’s point of view: “It truly was amazing. It was such an honor to be able to examine her as a character and really think about who she was as a person. It was a little bit going back in time with her -- I knew how she ended up and I had to find a way to find who she was, to get her to that point. It was a very close character study for me. An intimate way of looking at a character that was unique to writing.”

A central part of Jyn’s character is her dealing with the unfinished relationships with her parents, both lost to the Empire in very different ways. Notions of family and the ghosts of Mama and Papa Erso figure prominently into the story, Revis explains. “You see in Rogue One a little bit with her necklace and that plays a much, much bigger role in the book. And obviously any time she thinks of her necklace, she thinks of her mother and her family. I think there’s also a definite strain of her defining what family actually is. Before that, her family was just her parents and then she has to redefine that role, and yet still have to fit her father into that definition. You see that later on in the movie, where Cassian and the crew become her new family.” And when it came time to writing Jyn’s feelings about her father, a man Jyn later refers to with the line,"I’d like to think that he’s dead,” Revis adds “It was a very emotional scene for me to write when she realizes what her father has become or at least what she thinks her father has become and she has to face that.” 5. A Jyn trapped in a bottle. Revis remarks, “I do like the way I was able to explore the prison life, as well. The story is told with interstitials of her in prison for the months that she was there. To me, her being in prison was the last moment before she lost all hope. It makes for a very good starting point in the movie, because obviously in Rogue One she has lost hope. So I had to utterly break this character. [Laughs] It’s not a happy story all the time. There are moments of happiness, though. But having her in prison and exploring what a prison in the Empire could be like, and that labor camp that she had to go through, is brutal.” Plus, there’s a few other familiar faces that we see in the Wobani prison system. “We learn more about the cellmate we see in the movie [Nail] as well as other cellmates,” teases Revis. “Since not much is known about her, I was able to flesh her out a little bit. I built off of her character in the novelization of Rogue One and was able to go more in depth, as well.”

Star Wars: Rebel Rising was released on sale on May 2 in hardcover and ebook from Disney-Lucasfilm Press. In the UK, Rebel Rising will be available in paperback on June 1 from Egmont.