Where in the Galaxy Are the Worlds of Star Wars: The Force Awakens?

Plan your galactic roadtrip, from Jakku to Takodana and beyond.

The Star Wars galaxy has been expanding since 1977. Back then -- when flares referred to jeans (and not lenses) and tweets were how birds talked to each other -- the Star Wars galaxy consisted of just a handful of worlds. Tatooine, the Death Star, Dantooine, Alderaan, and Yavin's fourth moon. It was all we needed to enter a galaxy that has grown and grown ever since, through further films, comics, novels, and TV shows. We might not have known where these worlds were located in the galaxy -- that concept wasn’t in place quite yet -- but through our imaginations we certainly knew how to get there.

Step forward four decades to 2016. The Force Awakens has brought with it a whole new system of worlds to add to the vast and detailed map in which the saga is told. Jakku, Takodana, Hosnian Prime, D’Qar, the planet of Starkiller Base, and other locales are all revealed in the film, and as travelers of the Star Wars galaxy, we can now begin to learn more about them. Who are their neighbors? Where do they sit in galactic society? So many questions, and yet we only know a tiny bit about each world. But we do know where some of them are situated in the galaxy, so let’s take a look. 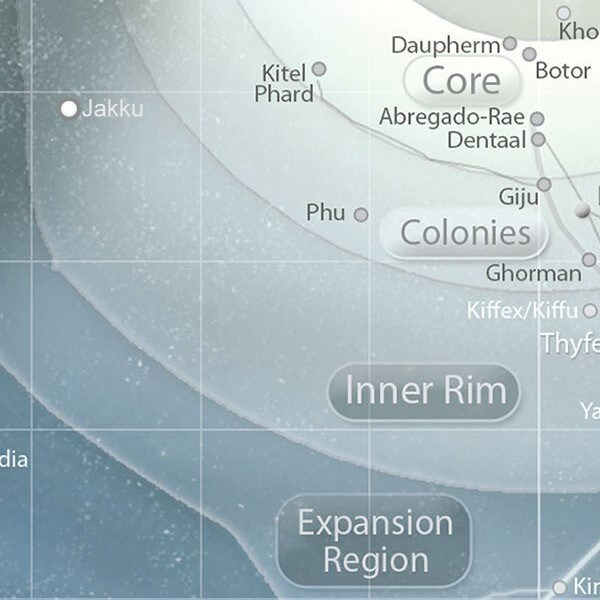 Take a look at The Essential Atlas map of the galaxy and then study the map on pages 8 and 9 of The Force Awakens Visual Dictionary. You will see that the desert world of Jakku sits lonely and isolated, way out in the Western Reaches of the Inner Rim. Of course, just because other worlds aren’t on the map doesn’t mean there aren’t a multitude of worlds out there. Like the Old West, that portion of the galaxy is still being discovered. As explorers struck out millennia ago and settled the galaxy they mostly headed Rimwards and to the east. The vast swathes of the Western Reaches and the Unknown Regions remained just that -- unknown. It’s in this area where Jakku sits, with only Zonama Sekot further west and Rakata Prime to the north west in the mysterious Unknown Regions.

Despite its remote location Jakku is actually far closer to the heart of the galaxy than many worlds far wealthier and richer. A comparatively short hop across the Colonies and into the Core, and you hit the trade world of Abregado-Rae and the beginning of the Rimma Trade Route. Regardless of this, few people visit Jakku and even fewer leave. 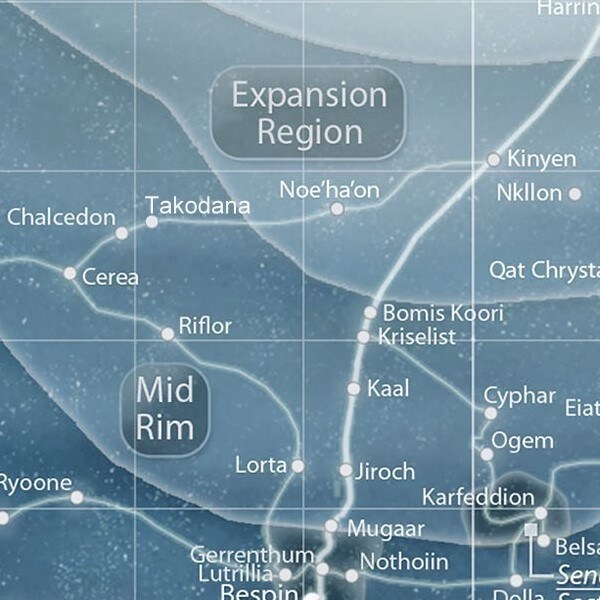 From Jakku, head south east, through the Inner Rim and the Expansion, towards the border of the Mid Rim and the Tashtor sector, and you will reach Takodana. A temperate forest world, Takodana is located at a busy junction in the Western Reaches. Head northeast and you are racing towards the Core Worlds. Head south and the Outer Rim awaits. For travelers heading in either direction, the planet has its appeal, hence the proliferation of smugglers and independent traders who frequented the castle of Maz Kanata. Head southwest down the nearby Great Gran Run and you will find Calcedon, the center of the galactic slave trade, while a hop northeast takes you to the jungle world of Noe’ha’on. Stay on the Great Gran Run and you hit the junction of Kinyen and the busy Corellian Trade Spine. 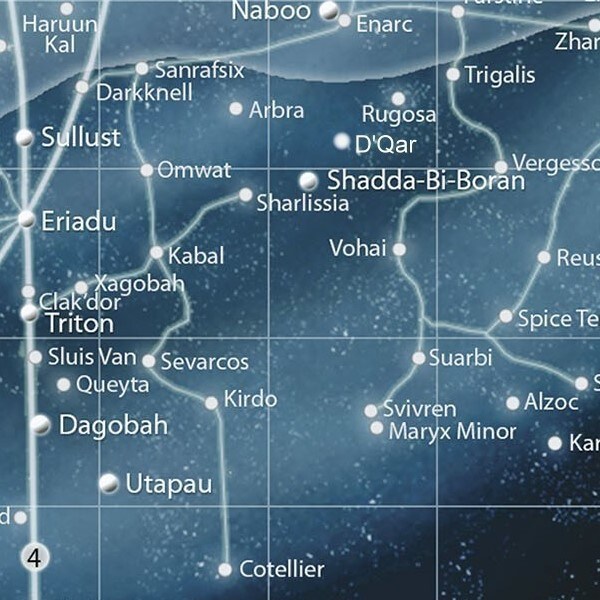 From Takodana, head east through the Mid Rim, cutting across the Corellian Trade Spine, the Rimma Trade Route and the greatest of all hyperspace routes, the Hydian Way, and you arrive in the Outer Rim, specifically the Sanbra sector. Here -- if you’re a member of the Resistance -- you’ll find the Ileenium system and the world of D’Qar, home to the Resistance base. D’Qar sits not far from the Rugosa system, a popular vacation spot for Toydarians and the Balmorra Run, which laces its way to the Rim. To the east lies Arbra in the neighbouring Bon'nyuw-Luq sector, while heading directly north takes you to the Mid Rim, the Enarc Run and nearby Naboo.

The location of the Resistance base illustrates the political state of the galaxy at the time of The Force Awakens. In times past, when the Rebel Alliance was fighting the Galactic Empire, they had hid themselves on the jungle moon of Yavin IV in the Gordian Reach, or on the barren and remote ice planet of Hoth in the Greater Javin. While D’Qar was by no means a "destination" planet in a particularly busy or heavily populated area of the galaxy, it did sit close to major space lanes. 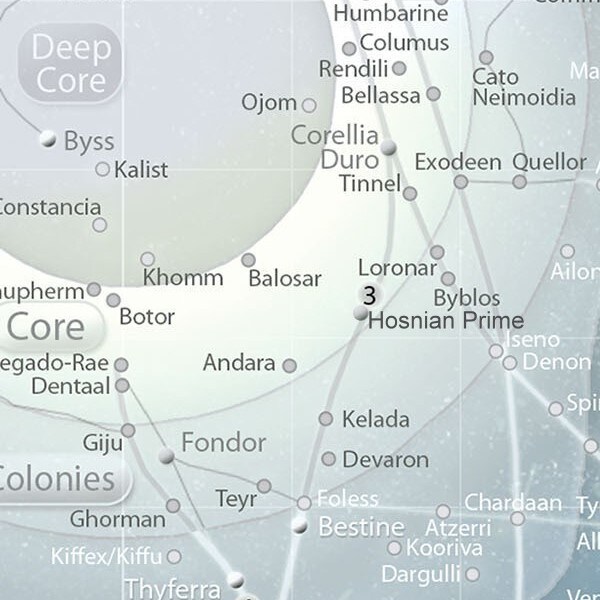 From D’Qar, head north, joining either the Corellian Run or the Hydian Way, and keep flying through the Mid Rim, the Expansion, and the Inner Rim until you hit Denon. Cut across to the Corellian Trade Spine and enter the Core Worlds, and there you will find the Hosnian system, home to the Republic Senate’s temporary home of Hosnian Prime. An urban world covered in sprawling cities, Hosnian Prime sits in a traditionally wealthy region of the galaxy, the Core Worlds. Located near to the Corellian Trade Spine, which runs north to Corellia and Duro, planets in this region are often financially wealthy and influential. Topping a vote to choose the next home of the Republic Senate, Hosnian Prime painted a target on its back and became the most prominent and public victim of the First Order. 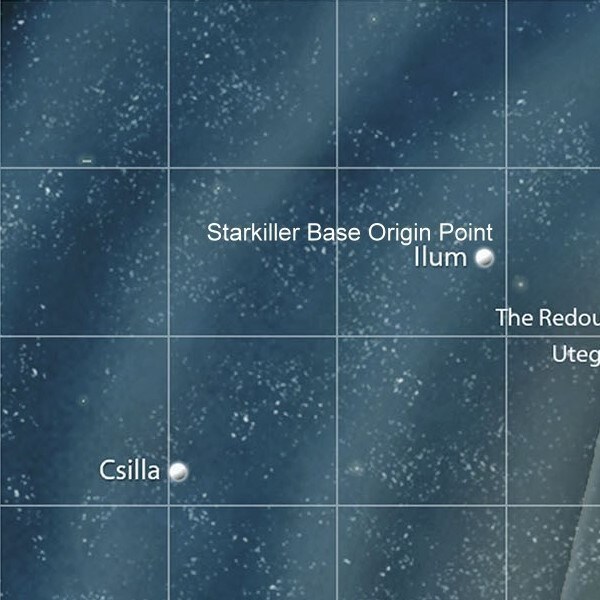 From Hosnian Prime, continue north on the Corellian Trade Spine to Corellia, where you then take the Corellian Run to Coruscant and head northwest into the Mid Rim and Ansion. Cut across Wild Space and into the Unknown Regions, and eventually you will find Starkiller Base, which was situated not far from the legendary world of Ilum. Barren and isolated, this ice planet was protected by perhaps the greatest planetary shield ever created. The original identity of the planet was unknown, although it must be said that the Unknown Regions are named so for a reason. Explorers rarely ventured out this far, with the majority of occupied world being to the east of Coruscant.

Draining entire suns dry, the aptly named Starkiller Base could fire its payload through sub-hyperspace. The First Order had its eyes set firmly on the extinguishing the Republic, and did so prior to its own destruction at the hands of a small team of Resistance fighters.

There's one more place we visit in the film. But there's not much known about it...

Mark has contributed to Star Wars Insider for a decade, is the owner of Jedi News, writes for DeAgostini's Build The Millennium Falcon partwork magazine and co-hosts RADIO 1138 on the Jedi News Network. He's a Rebel Legion UK supporter, an honorary member of the UK Garrison and a friend of the Rebel Legion and when he’s not talking, tweeting or writing about Star Wars he can usually be found sleeping where he’ll most likely be dreaming about Star Wars.