In this exclusive preview from the forthcoming book, the young general meets the future Grand Admiral during a mission far from home.

Author Timothy Zahn is back with the highly-anticipated follow-up to last year’s bestselling Thrawn novel. This time, Grand Admiral Thrawn and Darth Vader must join forces on a mission for the Empire. But it's not the first time the two have crossed paths.

StarWars.com is proud to bring you the first look at and listen of the forthcoming novel, Thrawn: Alliances, with an audio clip once again narrated by Marc Thompson. Plus, we have a sneak peek at the Thrawn and Anakin art that will grace the cover of the convention exclusive edition of the book at San Diego Comic Con in a few weeks.

In this exclusive excerpt below, we find a young Anakin on a personal quest when he crosses paths with a mysterious commander from the Chiss Ascendancy... 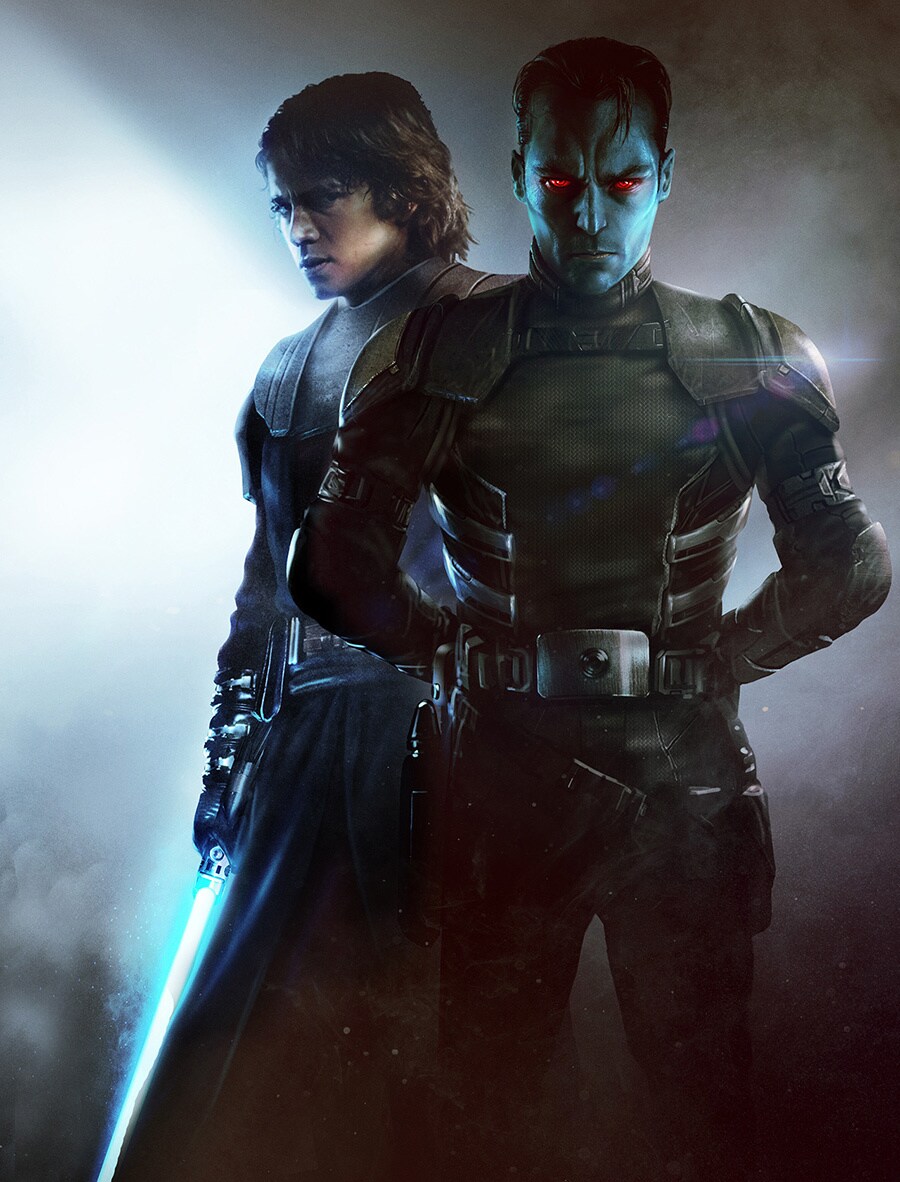 Taking a final look at the nav display, Anakin pointed the Actis toward the horizon and poured power to the drive—

Abruptly, R2-D2 trilled a warning. “What is it?” Anakin said, frowning as he checked his rear display.

And felt the back of his neck tingle. There was a ship back there, the size of a medium freighter but of unknown configuration.

Settling into orbit right beside his hyperdrive ring.

“Unknown ship, this is General Anakin Skywalker of the Galactic Republic,” he called. “Identify yourself and state your purpose.”

Nothing. Maybe they didn’t communicate on any of the Repub­lic’s standard frequencies.

Or, more likely this far out, didn’t speak Galactic Basic.

Anakin pursed his lips, running through his list of trade languages. He knew Huttese and Jawa Trade Language fairly well, but Batuu was a long way from Hutt influence. Meese Caulf? He was a bit far out for that, but it was the best he had. “Unidentified ship, this is General Anakin Skywalker of the Galactic Republic,” he said, working hard to wrap his mouth around the Meese Caulf words and hoping he was getting the grammatical structure right. “You are intruding on Re­public equipment and interfering with a Republic mission. I order you to pull back and identify yourself.”

“I greet you,” a calm voice came back in the same language. “Did you give your name as General Skywalker?”

“No, not at all,” the other said. “I was merely surprised. Let me as­sure you I mean no harm to you or your equipment. I merely wished a closer look at this interesting device.”

“Glad to hear it,” Anakin said. “You’ve had your look. Pull back as ordered.”

There was a pause. Then, at a leisurely pace, the ship drifted away from the ring. “May I ask what brings a Republic envoy to this part of space?” the intruder asked.

“May I ask what business it is of yours?” Anakin countered. It wasn’t very polite, but he wasn’t feeling in a particularly polite mood. Every minute he was stuck out here making sure this prowler be­haved himself was a minute he couldn’t spend looking for Padmé. “You can be on your way at any time.”

“To continue your travels,” Anakin said. “To go wherever you were going before you stopped to look at my hyperdrive ring.”

Another silence. The alien ship, to Anakin’s annoyance, had halted its sideways drift and was now pacing the hyperdrive ring at a dis­tance of a hundred meters. Still far too close for comfort. “Yes, I could continue on my way,” the intruder said. “But it might be more useful for me to assist you in your quest.”

R2-D2 gave a puzzled twitter. “I already told you I was on a Re­public mission,” Anakin said. “It’s not a quest.”

“Yes, I recall your words,” the intruder assured him. “But I find it hard to believe that a Republic at war would send a lone man in a lone fighter craft on a mission. I find it more likely that you travel on a personal quest.”

“I’m on a mission,” Anakin ground out. This was starting to be really irritating. “Directly ordered here by Supreme Chancellor Pal­patine himself.” Not that Palpatine even knew Anakin was here, of course, let alone sanctioning the mission. But if the stranger had heard of the Clone Wars he’d surely heard of Palpatine, and dropping the chancellor’s name might add some weight to his side of the con­versation. “And I don’t have time for this.”

“Agreed,” the other said. “Perhaps it would be best if I were to sim­ply show you the location of the ship you seek.”

Anakin’s hands tightened on the yoke. “Explain,” he said quietly.

“I know where the Nubian ship landed,” the intruder said. “I know the pilot is missing.”

Anakin ground his teeth. “So you intercepted a private transmis­sion?”

“I have my own sources of information,” the intruder said, his voice still calm. “Like you, I seek information, on that and other mat­ters. Also like you I’m alone, without the resources to successfully investigate. Perhaps in alliance with a Republic general we may find the answers both of us seek.”

“Interesting offer,” Anakin said. And now, finally, he was close enough. Taking a deep breath, he stretched out to the Force.

The intruder wasn’t human, though of course Anakin had already guessed that. He was near-human, though, like many other species in the Republic.

But the texture of his mind was unlike anything Anakin had ever touched before. It was neat and well ordered, the patterns of thought flowing smoothly and precisely in ways not unlike those of scientists or mathematicians. But the content of that flow, and the muted emo­tions accompanying it, were completely opaque. It was like a neat and precise array of unfamiliar numbers.

“So what answers are you looking for?”

“I wish to more fully understand this conflict in which you’re em­broiled,” the intruder said. “I wish answers of right and wrong, of order and chaos, of strength and weakness, of purpose and reaction.” There was a slight pause; and when the voice came back there was a new formality to it. “You asked my identity. I am now prepared to give it. I am Commander Mitth’raw’nuruodo, officer of the Expan­sionary Defense Fleet, servant of the Chiss Ascendancy. On behalf of my people, I ask your assistance in learning of this war before it sweeps its disaster over our own worlds.”

“I’ll make preparations at once,” Mitth’raw’nuruodo said. “One additional thought. Chiss names are difficult for many species to properly pronounce. I suggest you address me by my core name: Thrawn.”

“That’s all right, Mitth’raw’nuruodo,” Anakin said. Did this being go out of his way to be annoying and condescending? “I think I can handle it.”

Anakin clenched his teeth. He could hear a slight difference be­tween his pronunciation and the alien’s. But he couldn’t figure out how to correct his version. “Fine,” he growled. “Thrawn.”

“Thank you,” Mitth’raw’nuruodo—Thrawn—said. “It will make things easier. My shuttle is prepared. Let us depart.” 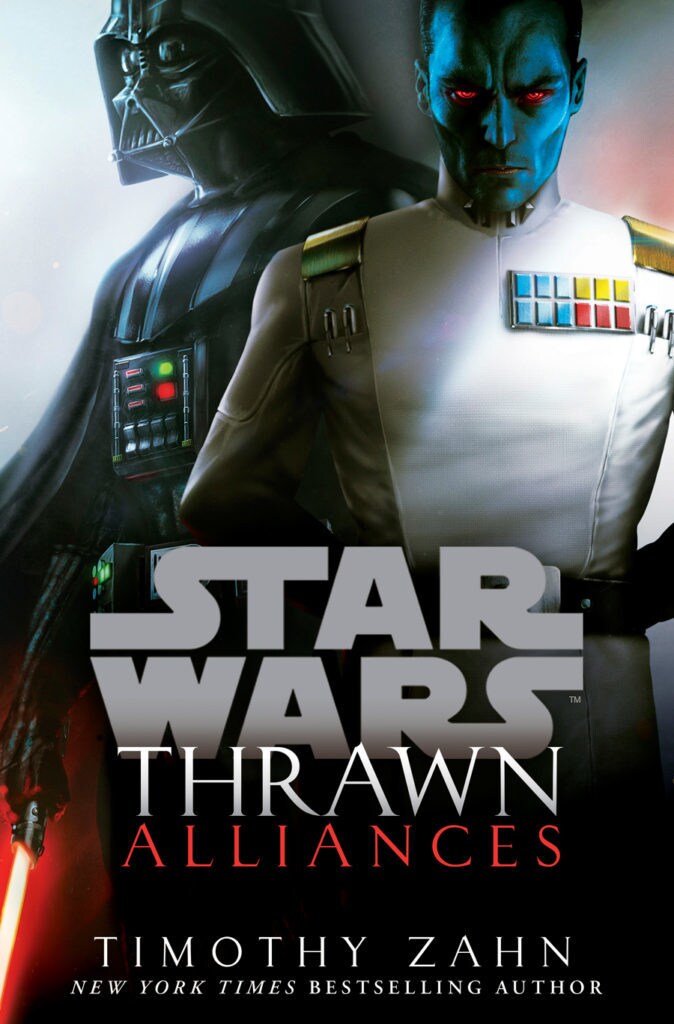 And you can pre-order your copy of Thrawn: Alliances now!