The Galaxy in Comics: Age of Republic - Qui-Gon Jinn and the Nature of a Jedi

Years before the Clone Wars, Qui-Gon Jinn questioned the role of the Jedi.

The Galaxy in Comics is a deep dive into the events and themes of one recent Star Wars comic. In this installment, StarWars.com checks out Star Wars: Age of Republic - Qui-Gon Jinn #1.

What is the purpose of the Jedi? That’s the larger question that Qui-Gon Jinn reflects upon from multiple angles in Star Wars: Age of Republic - Qui-Gon Jinn #1 as he ponders how others see the Jedi Order, how the Jedi see themselves, and what balance in the Force really means in the start of a brand new maxiseries from Marvel. 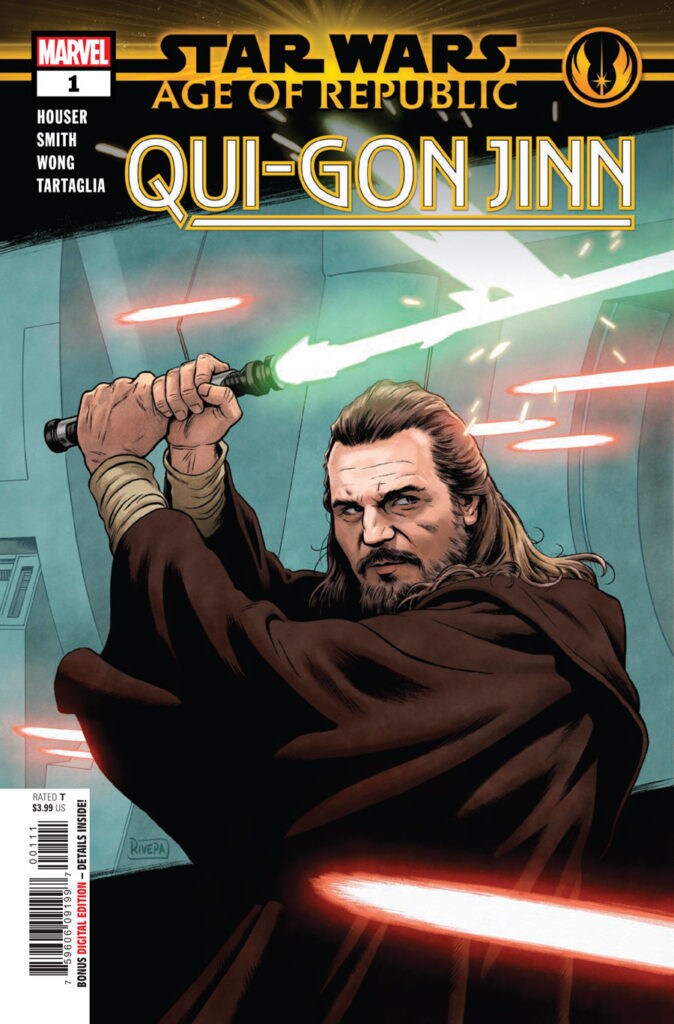 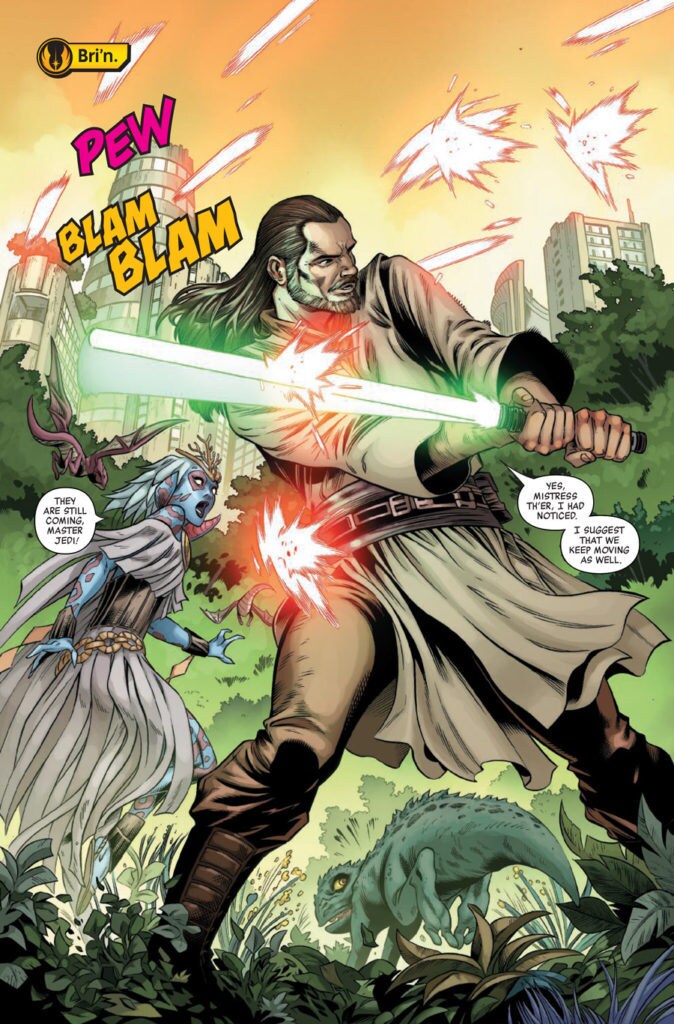 Subtitled “Balance,” Age of Republic - Qui-Gon Jinn isn’t about the conflict Qui-Gon’s trying to stop but rather a deeper exploration of the character himself as he questions the world around him. Veteran Star Wars comics writer Jody Houser introduces us to the Jedi Master in the years before Star Wars: The Phantom Menace as he and his Padawan learner, Obi-Wan Kenobi, try to solve a disagreement on Bri’n between the Priestess of Wood and the Metal Clan. When no easy solution presents itself, Qui-Gon removes Mistress Th’er from the planet entirely both for her safety and as a temporary fix, and returns to Coruscant to regroup and contemplate how to proceed in a situation where compromise seems impossible.

Qui-Gon is a man ahead of the times as he questions how entwined the Jedi Order has become with the Republic’s government. He rightly points out to Master Yoda that the Jedi Temple is located on the capital planet and many see the Jedi as being both soldiers and servants of the politicians. As Mace Windu would later say, the Jedi are supposed to be “keepers of the peace, not soldiers,” and yet Qui-Gon seems to have a more realistic view of the Jedi Order. They have become weapons of the Republic, albeit weapons who present themselves as peacekeepers and negotiators and who perhaps still truly believe themselves to be as much. He also points out that “our actions are a reflection of our purpose” and that after being used as a weapon of the Republic for so long that perhaps even the Jedi are beginning to see themselves that way. It makes it hard not to wonder how he might have reacted when the subject of forming a Grand Army of the Republic came before the Senate years later -- and the Jedi becoming its generals. 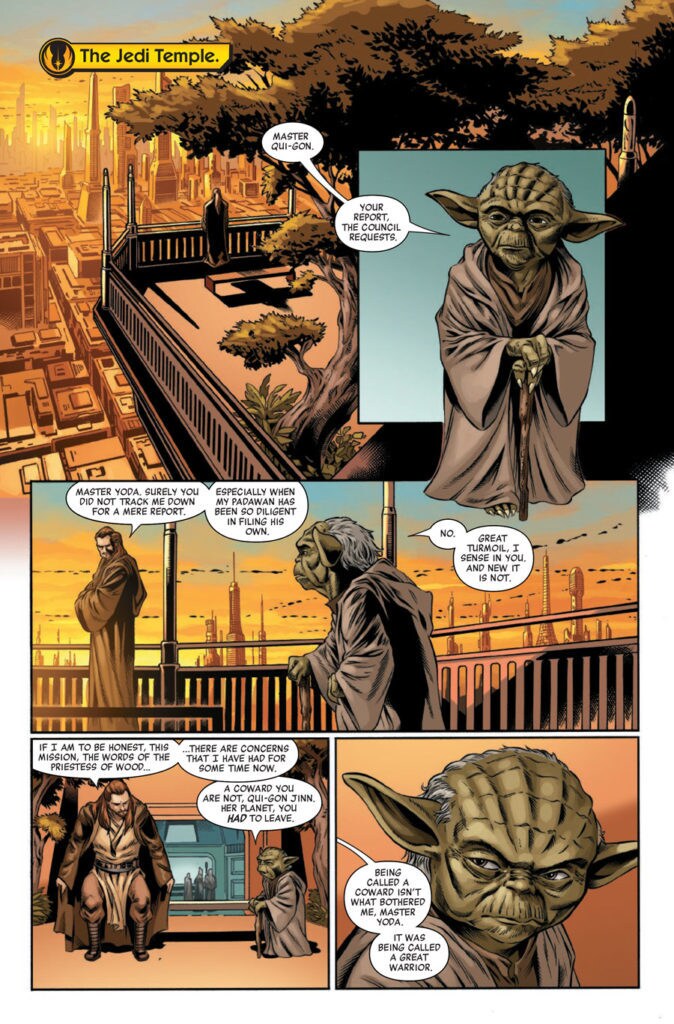 His trip to an undesignated planet at the Force’s guidance perhaps answers that very question several pages later. “Violence sows the seeds of the dark side. Unchecked, the Jedi could become that which we fight against,” Qui-Gon thinks after emerging from his Force vision. The vision itself feels like Qui-Gon’s version of Luke’s encounter with the cave on Dagobah. Weapons aren’t always the answer.

I find that comic books are a strong medium for depicting the Force and all of its weird intricacies. We saw how Darth Vader #8 portrayed Vader’s meditations and now Age of Republic - Qui-Gon Jinn gives us the Jedi Master’s Force vision in all of its distinct glory. Colorist Java Tartaglia uses a bright yet restrained palette during the vision that helps it really pop out from the rest of the book, even in comparison to the bold colors of the planet itself. 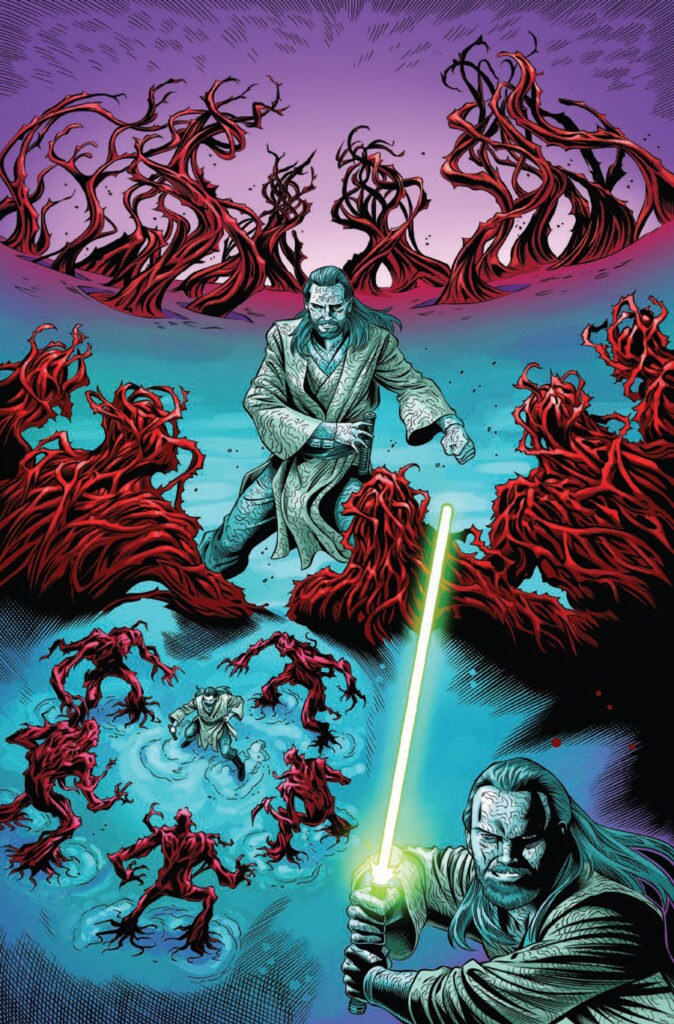 The issue ends with another conversation between Yoda and Qui-Gon, with the former asking, “The dark side consumes and there is no balance to be found in such a path. And what is our purpose if not balance?” Years later, was this very vision going through his mind when he encountered Anakin Skywalker and believed him to be the Chosen One? Perhaps it can just be boiled down to the quintessential Star Wars word: hope. There are no firm answers to be found in the pages though, and we are left to wonder.

Additionally, while not missing entirely, Obi-Wan plays a relatively small role within the issue, allowing Qui-Gon to be defined on his own terms and less in relation or in contrast to his Padawan. This will likely be a reoccurring strength of these Age of books. They’ll feature characters we know well and love, of course, but they’ll also give others a true chance to shine.

On the art front, penciller Cory Smith is an excellent fit for the prequel trilogy era, especially given the higher number of aliens present in this issue. Smith’s take on Yoda is wonderful, visually invoking the wisdom and kindness of the ancient Jedi Master. His rendition of the undesignated planet feels somewhat reminiscent of Pillio from Star Wars Battlefront II with both its bright colors and how the Force calls on a Jedi to visit.

Age of Republic - Qui-Gon Jinn leaves us with questions but encourages us to ask more of our own as we turn the final page. Sometimes, it’s just nice to know that not even the sage Jedi Masters know all.