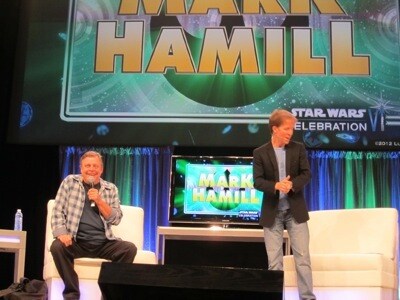 Some fans waited in line for 6 hours.  And even though the theater reached capacity an hour before the panel, hordes of people waited outside with one hope:  to see Mark Hamill.  I’ve never seen Mark Hamill in person.  I’ve watched him hundreds of times in the Star Wars films, I’ve hung his photos on my wall, and as a kid I hoped to one day marry him.  So after years of wishing and daydreaming, I rushed into the theater, plopped down into a seat, and prepared myself to see Luke Skywalker in person.

When Mark Hamill came out, the audience leapt to their feet and cheered.  When he got to the center of the stage he stretched out his arms and, in his words, gave us a “metaphoric hug.” Some of us in the audience gave him an air hug right back.  What a moment.  James Arnold Taylor was the interviewer for the evening and the two of them had such a great rapport.  They even had a fun moment (later in the evening) where they recreated the training scene on Dagobah when Yoda was on Luke's back. 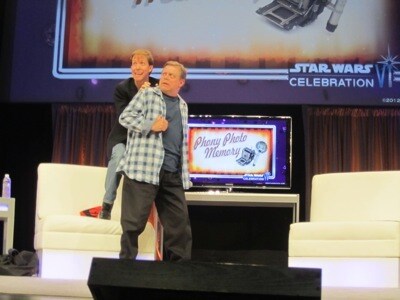 But to begin, James Arnold Taylor started off by taking us back to the past---when Mark Hamill first got into acting.  Hamill explained that he was the middle of 7 children and therefore spent his childhood trying to get attention.  He found that putting on puppet shows and doing magic tricks definitely got him in the spotlight.  Eventually when he got older, he began doing guest spots on television and in films.  He even auditioned for a part in George Lucas’ American Graffiti.  He didn't get that part but instead landed the breakthrough role of a lifetime in Star Wars.

Instead of performing a scene for his first audition for Star Wars, Hamill simply chatted about himself. “I had a certain cluelessness that was very valuable,” Hamill remarked.  In retrospect, he believes that he must have come across as an innocent farmboy in that audition.  Which was perfect for the role of Luke Skywalker.  When he got to the final round of auditions, Hamill was given a scene to perform with Harrison Ford in front of George Lucas.  “I couldn’t make heads or tails of the scene,” Hamill laughed.  Since a movie like Star Wars had never been done before, he couldn’t figure out what the tone of the film was---what is a parody?  A Saturday Night Live sketch?  Instead of putting any sort of stylistic spin on his read, he delivered his lines as real and straightforward as possible.

Hamill also shared that before the film was cast, there were two teams of actors that were being considered for Luke, Han, and Leia.  Team A was Mark Hamill, Harrison Ford, and Carrie Fisher.  And while he didn’t divulge who the actors in Team B were, we all know what the outcome was!

Then James Arnold Taylor segued into the fantastic voice work Hamill has been doing over the years.  An image of the Joker (from the Batman animated series) appeared on the screen and the crowd went nuts.  Regarding the Joker, Hamill didn’t think he stood a chance at being cast as the green-haired villain.  When he got the part, he totally panicked.  “I felt it was too high profile and thought there was no way I could satisfy everyone’s expectations of how the joker should sound,” Hamill said.

It was at this point that he brought out his notebook from his backpack and walked to the front of the stage.  Then he launched into a Joker monologue that left the audience speechless. 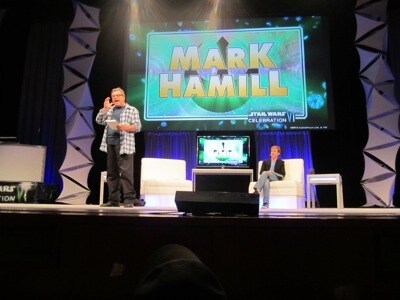 Watching him perform in person was absolutely incredible.  He is such a fantastic actor that I suddenly felt like I was no longer in the Chapin Theater…but in a theater on Broadway!  Needless to say, his amazing performance received a standing ovation.

It’s clear that Hamill loves the process of performing and challenging himself as an actor.  On January 14th, audiences will be able to see him as a villainous character named Crow in the film Sushi Girl.  After showing a clip from the upcoming film, they moved on to taking questions from the audience.  One fan asked if he could give talk about the rehearsal process during the making of the Star Wars films.  Hamill said that Alec Guinness, “was the kindest, funniest…just a gentle man with a great sense of humor.”  However the majority of Hamill’s rehearsals were with Frank Oz as Yoda.  Part of the reason was because they weren’t sure the puppet was going to work.  But when it came time to act opposite the Yoda puppet, Hamill said, “to me, Yoda was instantly real.”  Hamill shared that Oz and him bonded immediately.  Especially since Oz had an “easy going presence.”

In between questions, someone in the audience shouted, “when are we going to see you on The Clone Wars?”  Hamill made the good point that Luke Skywalker was probably not even born when The Clone Wars were happening.  However he is definitely open to playing another character on the show.  Hamill said he’d love to play a, “really sickening character like…Darth Barth.”  He then joked for fans to start a writing campaign to get him on the show.  The audience cheered and several people next to me exclaimed that they’re definitely going to try.

The final question came from a fan who asked how Hamill feels about not being able to experience Star Wars like the rest of us.  Hamill replied, “I wouldn’t trade it for anything.”  He admitted that the magic of the films is “deconstructed” for him but that he’s so grateful to have experienced it all first hand.  Hamill said that he’s tried to remain the same person even after all the success of Star Wars.  In fact he still is surprised at how excited fans get the moment they see him.  “They’re really overwhelmed just because I’m here.”  Indeed we are, Mr. Hamill.  Indeed we are. Jennifer Landa is a Los Angeles-based actress, writer, and video blogger.  One of her proudest moments was helping to design the Death Star...into a skirt.  To learn more about Jennifer, visit jenilanda.com.