From lunch with Uncle Owen and Aunt Beru to an...unfortunate dining-room encounter with Darth Vader, meals in Star Wars have real significance.

As we approach Thanksgiving, we prepare for one of the biggest holidays of the calendar year. Family and friends gather from all around to share a meal. In essence, we eat together to establish unity, and this is an important part of building relationships amongst our brethren.

It’s important in literature as well. Scenes of characters eating together have significance, as the audience knows something meaningful is taking place. When you break bread, you are sharing a personal, sacred moment, and, most likely, you are doing it with people you like. Naturally, we see many examples of this in the Star Wars universe that hold particular weight.

The first time we witness a meal in Star Wars is when Luke Skywalker sits down with Uncle Owen and Aunt Beru on Tatooine. Luke casually mentions to his uncle that he wants to transmit his application to the Academy this year, but his uncle has other plans. Owen tries to keep his surrogate nephew  on the desert planet, which leads to immediate frustration for the young Skywalker. As an audience, we are aware that the future Jedi Knight has a greater mission he is destined for, but all Luke is cognizant of is that his uncle is holding him back.

Ordinarily, a director would not choose to show something as ordinary as a meal unless something significant were taking place, and the above scene demonstrates this beautifully. The audience needs to see how characters are getting along (or not getting along, as the case may be). Luke’s reluctance to stay behind to finish his meal with his family illustrates his frustration with his station in life. Holding this dialogue at the dinner table helps to accentuate the gravitas of Luke’s internal struggle.  He wants to stay with his family, but feels compelled to explore outside of his comfort zone.

Another intriguing example of this occurs in a pivotal scene on Dagobah in The Empire Strikes Back. Luke, having just met Yoda on the swamp covered planet, is invited into Yoda’s hut for some rootleaf.  The meal, in itself, does not appear to offer much in terms of sustenance. However, the significance of this exchange is palpable. Luke rejects Yoda’s offering, just as he rejects the Jedi Master’s methodology. While Luke tries the meal offered, he is not satisfied with the result, much like his impatience during his Jedi training. This seemly innocuous rejection of food could be construed as a harbinger of Luke's relationship with Yoda, as well as his tutelage, unless he learns to control his anger. Yet again, the presentation of a meal reflects the interpersonal dynamics of relationships between characters.

Conversely, a meal that does not go as planned is a bad sign of community. Arguably, the most captivating example of this occurs in a pivotal scene from The Empire Strikes Back. Han, Leia, and Chewbacca are led by Lando Calrissian into the formal banquet hall, only to be greeted by the Dark Lord of the Sith, Boba Fett, and a bevy of stormtroopers  Just as dining together demonstrates positive things for a community, a bad meal (or one that does not take place) is a bad sign. Eating with friends is sacrosanct; Vader's decision to interrupt a meal, and Lando's willingness to go along with this indicates the deplorable depths Darth Vader will go to, as well as emphasizes the gravity of Lando's betrayal. Violating the sanctity of communion in this manner is in truly poor form, and accentuates the peril within these walls.  In fact, the doors shut on the viewer, as the betrayal of this social contract is too for audiences to bear. 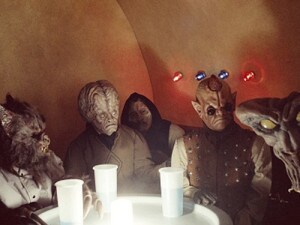 It is difficult to fathom discussing food as a means of breaking down social barriers without bringing up the iconic cantina scene from Star Wars. While food is readily consumed, drinks are imbibed as patrons engage in communion. In this example, we see evidence of diversity, community, and fellowship, as well as aggression and animosity. For some, this could very well be how Thanksgiving is in your homes; regardless, it is important, as Luke Skywalker and Obi-Wan Kenobi meet Han Solo and Chewbacca for the first time, cementing lifelong bonds in an unconventional fashion.

The saga is replete with many examples of food to establish community and fellowship; eating is an important literary device to convey that something important is taking place, and Star Wars provides many important examples of this.  Next month, we will look at evidence of this in the prequel trilogy. Happy Thanksgiving to you and your families!