In Star Wars: The High Republic: Trail Of Shadows, with art from David Wachter, colors by Giada Marchisio, and cover art from David López, Older will introduce the mystery fiction genre into the new era of Star Wars storytelling. "We’re exploring a new corner of The High Republic with Trail of Shadows, in which we get to see another side of the Jedi and the Republic," Michael Siglain, Lucasfilm Publishing creative director, tells StarWars.com.

Following the shocking events of the Republic Fair, the Jedi call upon one of their own, Emerick Caphtor, to investigate a strange mystery with ties to the Jedi Order. At the same time, Chancellor Lina Soh calls upon Sian Holt, a high-end, in-demand private detective to look into the same mystery. But will either solve this riddle before anyone else dies?

"There are so many weird and terrifying threads to unravel here," Older teases, "and David Wachter's excellent art fits the mood, urgency, and depth of this story perfectly." 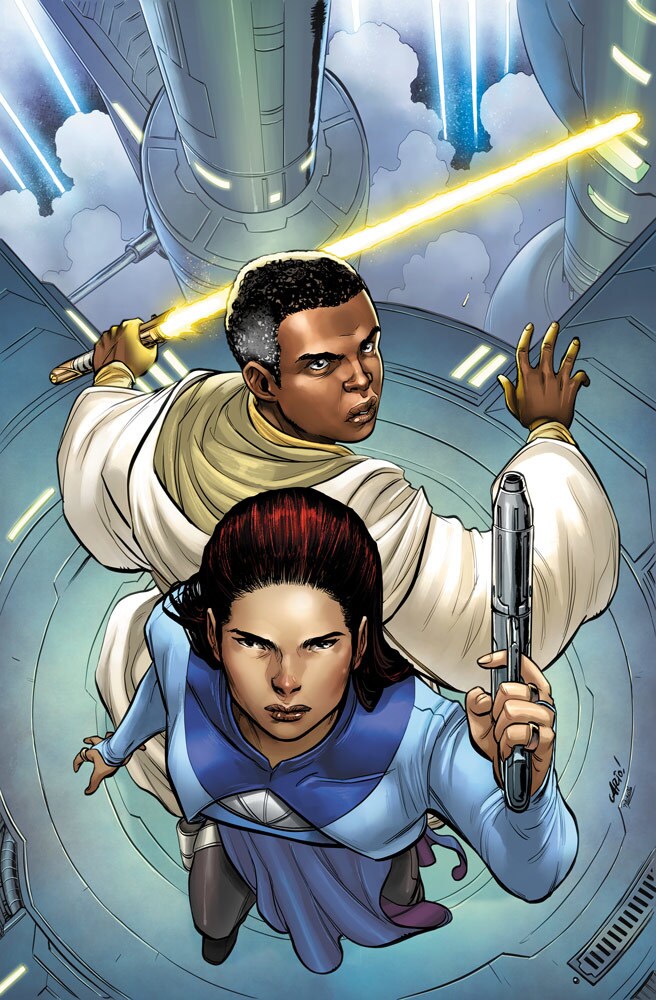 Today, Star Wars: The High Republic Show shared a first look at the comic's first issue variant cover from Ario Anindito and Rachelle Rosenberg. And we asked Older, Siglain, Anindito, and Marvel editor Tom Groneman to give some insights into this new corner of the galaxy.

"I am beyond excited to be working on this thrilling, creepy, delightful story," Older says. The project is a fusion of two facets of Older's personal fandom: "my lifelong love for Star Wars with my lifelong love of noir, crime stories, and mystery."

When it comes to detective fiction, classic icons and bookshelf mainstays like Sherlock Holmes and Hercule Poirot spring to mind. "We’re certainly looking to iconic detective relationships as inspiration," Siglain says, but always with a Star Wars twist. Anindito compares newcomers Emerick and Sian's chemistry to The X-Files duo Fox Mulder and Dana Scully. "One is more spiritual with the Jedi conduct, has his own personal and emotional approach to things, and the other is more into the detective side: sharp, practical and logical. Those personalities made interesting chemistry."

"There are definite Dave and Maddie and Mulder and Scully vibes,"adds Siglain. "And maybe even a hint of Nick and Nora Charles, but all by way of a galaxy far, far away, and all through the lens of The High Republic."

"This is still very much set in the golden age of the Jedi," says Groneman. "The many suns of the galaxy are shining brightly on the [Jedi] Order. But in Star Wars, the dark always rises to meet the light and Starlight Beacon casts a long shadow."

The story will connect directly with the new Cavan Scott novel The Rising Storm, although the editorial team is tight-lipped about the narrative thrust since that book won't hit shelves until this summer. "The mystery at the center of our story will expose cracks and splinters in the mighty foundation built by the Jedi," Groneman says ominously. "The hunt for the truth and the trail that leads to understanding the scope of this threat will not only affect our two detectives but also have ramifications for the entire galaxy."

But it's also been incredibly fun to explore a different genre set in this new era, especially through the artistic media of comic book storytelling. "Artist Dave Wachter is the perfect person to illustrate a thrilling crime mini-series that will explore the grittier side of the High Republic," says Groneman. "Add cover artist David López and colorist Giada Marchisio to the mix and we have an exciting Star Wars story with just the right blend of pulp and noir."

"It’s going to be so much fun to explore the mysteries that happen behind all the grandeur and glorious facade of the High Republic," Anindito adds. "So many possibilities, anything can happen behind the curtain... mysterious and sinister things!"