The makers of the augmented-reality experience on turning Jedi Challenges to the dark side.

The Dark Side Expansion arrives today for the Lenovo and Disney augmented-reality experience, Star Wars: Jedi Challenges, and it's the stuff of dreams for fans of black-clad, red-lightsaber toting bad guys. A free update to the mobile app, the Dark Side Expansion places players inside the virtual boots of Kylo Ren, where they'll wield the game's beautiful and undeniably-cool lightsaber controller and duel Star Wars legends like Yoda and Rey.

For the makers of Jedi Challenges, turning their game to the dark side was something of a no-brainer.

"We said, 'Why don't we focus on what the public likes, which is lightsaber combat," Christopher Hunt, art director on Jedi Challenges, tells StarWars.com. "We started to formulate a plan on the update being centered on lightsaber combat, with adding new characters and a little bit of a twist on how you wield a lightsaber and who you are while you're playing."

It's a twist that works very well, and in myriad ways.

As it turns out, it's fun to be the bad guy. Regardless of Kylo's power, standing face-to-face with and besting such iconic heroes is a thrill, if not cleverly subversive; it's hard not to swing that lightsaber just a little harder knowing you're a dark side devotee, or smile while doing so. Having players step into the role of Kylo Ren serves another purpose, as well. It allows gamers to be a Star Wars villain without having to journey down the dark path themselves, which was important to the developers. "We were going around and around on ways to solve that, and eventually the solve we came up with was, 'What if you just are Kylo?" says Douglas Boethling, assistant producer on Jedi Challenges and member of the Lucasfilm Games Team. "You are taking on the persona of Kylo and you're acting out the Kylo fantasy. That gives it that layer of separation, where you are playing that role." (Made by Lenovo and Disney, the limited-edition Kylo Ren lightsaber controller, which adds another layer of immersion, is also releasing today. It's filled with details, like exposed wires and scorch marks, and is a gorgeous piece on its own.)

But there's more to the duels in the Dark Side Expansion than just a swap of Force-allegiance. Gameplay has been tweaked and improved, from a wider play field, allowing for more opponent and player moves, to lightsaber handling and Kylo's abilities like "Rage," "Pull," and "Second Wind."

"We had the original framework for the game," says Hunt, "and there were a lot of lessons that we learned in production for Jedi Challenges. So we were able to play to the strengths of the technology, since we knew exactly what we could do and what we couldn't. But we also figured out where we could push the envelope a little bit, and those are some of the features that we tied into the Dark Side Expansion."

"A really interesting ability Kylo has is 'Cross-Guard,'" Boethling says. "It plays into the fact that even when he's defending, he's such a violent attacker that he's still attacking you. If you hit a short block sequence, you stun the opponent and get an opening."

"Each of the characters feel really unique and authentic to how they appear in the films or other forms of media," adds Matt Group, producer on Jedi Challenges. "So when you're playing Yoda, he throws things at you like in Revenge of the Sith. It just puts a big smile on my face when you get those moments that translate from other media into our game."

Indeed, the team took special care to get character-through-action just right, collaborating closely with Lucasfilm to bring the update's Jedi to life.

"Looking at something on a screen, it's much more forgiving with animation than it is when a character is standing right in front of you," Hunt says. "One of the things we wanted to do was to make sure that the motions were as accurate as possible, without using mo-cap at all. To be as responsive as possible to the player."

To do so, they went to some surprising sources. Beyond reference material like photography or studying the movies themselves, the developers looked, essentially, at the making of Star Wars lightsaber duels. "We get a lot of footage, and not just what's seen in the films," Hunt says. "We're able to get a lot of access to footage of the actors and actresses when they're going through training and behind the scenes. That's really, really helpful, to see what the intention behind the motion is, and not just the final product based on what the director may have wanted you to see in that particular spot. Being able to see an entire sequence of how a fight scene has played out before the final edits and cuts are put in, you can really start to break down how a person moves."

When it came to character selection for the Dark Side Expansion, the developers took advantage of Jedi Challenges' conceit: you're fighting a hologram -- projected from a Sith holocron -- and not the actual person. This opened up all kinds of possibilities as far as who could be included, and allowed the game to neatly tip-toe around continuity issues, like whether the characters were living or dead.

"We talked with Lucasfilm about who would be the most compelling characters that you'd remember playing, especially given the character that you're going to be," Hunt says. "We ended up landing on three characters that are very iconic and also cover the breadth of Star Wars."

"It's always fun to see characters interact with characters they don't normally interact with," Group says. "So the fact that you have Kylo versus Yoda, that's something we haven't seen before. So it's kind of treading new ground, but it still feels grounded in the Star Wars universe." (And for those wanting to test their skills against Jedi of their own galaxy, Jedi Challenges features a two-player mode via a local WiFi network.) 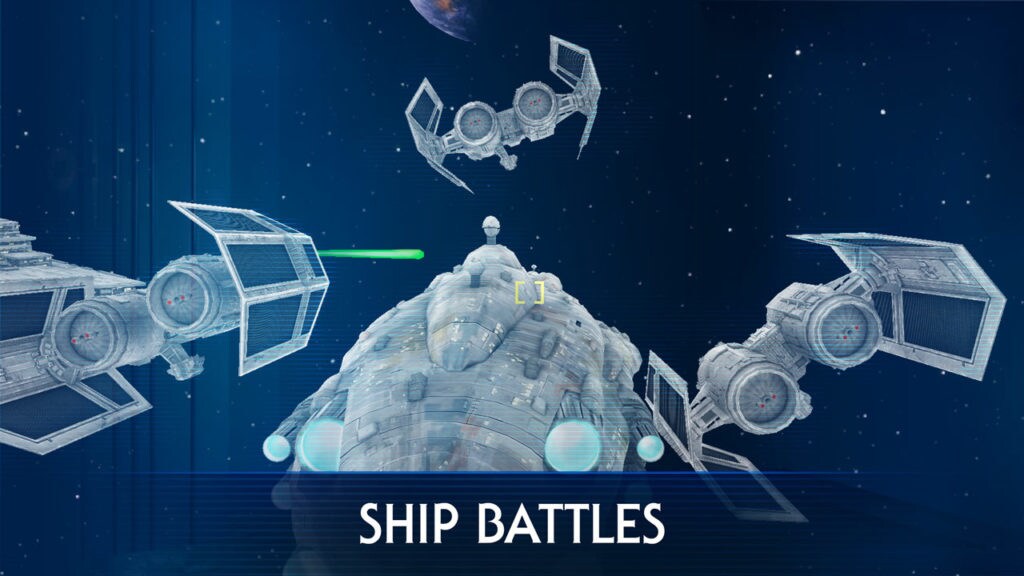 Releasing with the Dark Side Expansion update is Ship Battles, a new space-combat strategy game with a full 3D map that lets players take command of an Imperial Star Destroyer or Rebel Mon Calamari Cruiser, managing offensive and defensive maneuvers. "One thing that we felt was missing from the Jedi Challenges experience was taking the battle to space, and what that would feel like in the headset," says Group. "I really wanted to fulfill that wish: I'm an admiral in an epic space battle, and how do I control that ship?" It's a completely different experience than lightsaber duels, but takes Jedi Challenges into another core area of Star Wars.

"Star Wars was an IP I grew up with," says Group. "I've always wanted to work on something for it, so that was something that drew me to this project. The fact that you get to wield a lightsaber, that's like the wish fulfillment that everyone wants. 'I want to wield a lightsaber, feel as powerful as a Jedi or a Sith.' Personally for me, it's been a dream-come-true project, but also for our players, it's something they can't experience anywhere else and have always wanted to experience."

"I've worked on a couple of other Star Wars titles, and this is the first game where I felt like I was playing, and not playing as a surrogate for another character," says Hunt. "And that's quite fun, because you feel that much more invested and much more involved in what you're doing and how you're affecting the outcome."

Whatever the advances of Jedi Challenges, its true success comes from its sense of wonder, and making fans feel part of Star Wars in a very real way. It's something that is not lost on the game's creators. As Hunt puts it, the Jedi Challenges experience can be boiled down to one thing: "The magical moment when you hand someone the lightsaber, and they say, 'What do I do with this?' You say, 'Push this button.' Then you hear the lightsaber turn on and then the person says, 'Wow.' It happens every single time."