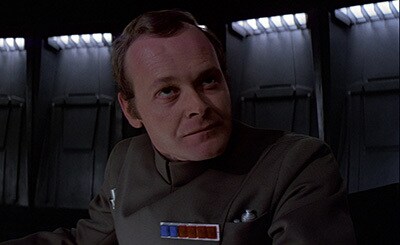 The man who first showed us the effects of the awesome powers of the dark side passed away suddenly on Monday 15th April 2013 in Austin, Texas. Richard Leparmentier, better known to millions of Star Wars fans as Admiral Conan Antonio Motti left an indelible imprint on the Star Wars galaxy, helping to illustrate the fearsome powers of Lord Vader as well as the arrogance and malice of a bloated and over-confident Empire.

But what of the actor behind the sneering Admiral? Where did his story begin, and how did he make his way to a galaxy far, far away? Richard was born near Pittsburgh, Pennsylvania on 16th July 1946 and grew up on a dairy farm. His father had emmigrated from Guernsey, his mother from County Mayo in Ireland and their backgrounds had nothing to do with the world of theatre, film or television that Richard would later inhabit.

He moved to Hollywood, Florida in his teens and joined the school drama club to make friends. His drama teacher advised him that he could make a living as an actor and after traveling over Europe and North Africa after graduation he entered the drama program at Wayne University in Detroit, Michigan.

Returning to London after graduation he was offered a Fringe Theatre production and the play was picked up by the BBC. Richard was granted a union card and his career began.

Richard toured Britain and Europe with the Incubus Theatre Company for a year, a hectic and enjoyable period. Soon he auditioned for a small British film called Stardust starring David Essex and won the part of the American music lawyer who with Larry Hagman as his manager made Essex a global star.

Richard fell in love with film. Stardust led to a rich career in British television and led to his first American blockbuster, Rollerball. Richard moved to LA for the opening of the film only to find that his role as a corporate assassin had been cut, but luckily for him and for us his agent sent him to a small studio to audition for a sci-fi film called Star Wars. He read for Han Solo while a casting assistant read Greedo, and Brian DePalma was at the audition so, as many other members of the cast famously did, he also auditioned for the film Carrie. Richard won the role of the high school principal who dies a bloody death at the climax of the film, but the film couldn't get a green light for production. Richard waited nine months, eventually returning to London to do more television. By then Star Wars was in production at Elstree Studios and he was offered the role of a customs officer in Mos Eisley, but he didn't feel the two-line part was sufficient so he turned it down.

Ironically Lucas cut the scene from the script and a month later Richard was offered the infamous Admiral Motti. A wise choice, as those Motti scenes are among the most iconic moments in the entire saga.

At this time Richard was about to be a father when he screen-tested for Who Framed Roger Rabbit. The casting director got Richard into a meeting with Zemeckis three weeks after Richard’s daughter Rhiannon was born and he was cast in the film, produced by fellow Star Wars alumni Robert Watts.

But film wasn't to be where Richards career would ultimately lie. Living in Bath, Somerset in the UK writing and producing had become his focus. Star Wars conventions were ever-increasing and Richard quickly became a staple of the circuit, travelling the world and telling stories of his days on set. In 2008 he started Three Rivers Productions, focusing his energies on his writing career and at the same time worked hard on his Apocalypse Now spoof Motti Now, featuring the Admiral and featuring fellow Star Wars friends Kenneth Colley, Jeremy Bulloch, Garrick Hagon and Jerome Blake. It was a project that sadly Richard was never able to see to completion.

Daughters Rhiannon and Stephanie, and son Tyrone were his pride and joy, with Ty famously joining Richard at numerous events, most memorably Celebration Europe in 2007. And his close ties with fandom and the friendships forged therein, his membership of 'The Rat Pack', his love of a good red wine, his skills at petanque, his infamous run-ins with The Forcecast, numerous honorary memberships of clubs and associations, that hilarious Tunes advert, the force choke...

The Star Wars galaxy lost not only another member of that first films cast but a real character. Forthright, opinionated, generous with his time with a dry wit and never at a loss for words, Richard was guaranteed to be at the centre of everything, wherever he went. Conventions will continue, future films will be released but on Monday 15th April 2013 Star Wars lost a special character it will never get back.

Mark Newbold has contributed to the Star Wars Insider magazine since 2006 and been involved in websites since 1995. He is the co-owner and Daily Content Manager of www.jedinews.co.uk.