Take a trip back to 1983 with Jabba's favorite pet. 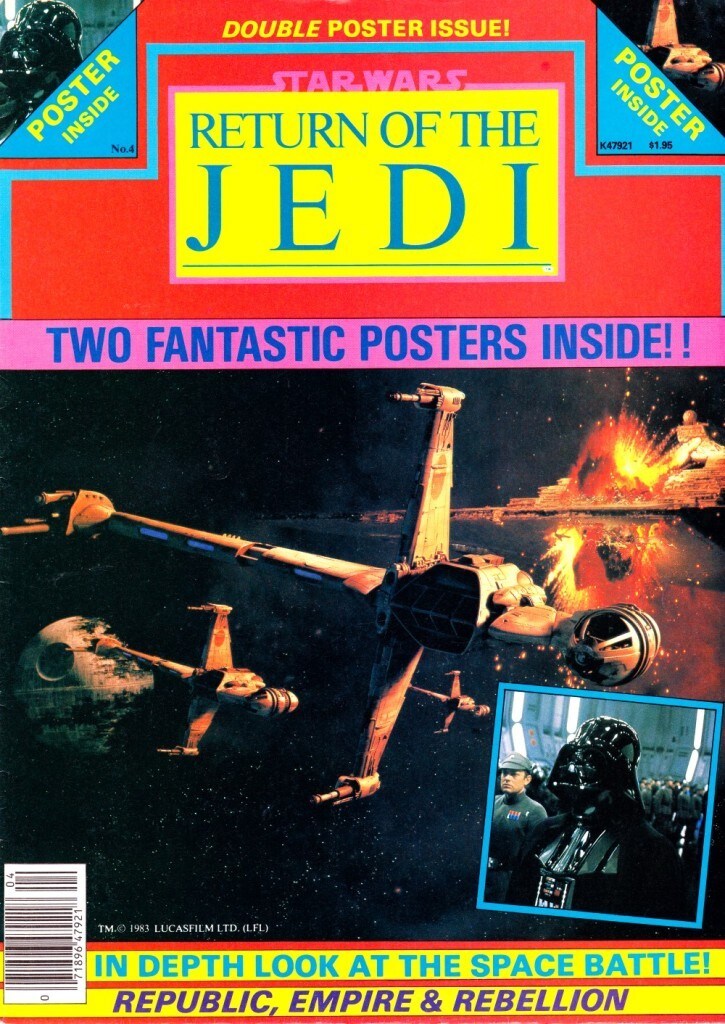 By the time the fourth issue of the Return of the Jedi poster magazine hit the streets in late summer of 1983, the world was already well aware of the magnificence of the third Star Wars film. Bringing the saga to a close – perhaps permanently – George Lucas was preparing to shift his focus away from the galaxy far, far away and towards more earth-bound projects. Indiana Jones and the Temple of Doom was in production, his interests in developing Lucasfilm as a company were coming to the fore while other longstanding concepts were slowly taking shape. The future of Star Wars lay on the small screen with The Empire Strikes Back heading to television and video in 1984 along with the first of the Ewoks movies, Caravan of Courage and the arrival in 1985 of the Ewoks and Droids Adventure Hour.

Another galaxy, another time. In 1983 we were still riding high on the glut of new arrivals into the Star Wars galaxy and the resolution of longstanding questions answered. As with the previous issues, the Return of the Jedi poster magazine gave us an insight into many of those questions and as the four-issue run ended it gave us a close look at the creatures and starships of Episode VI. While we may have had to wait thirty-two and a half years for the continuation of its story with The Force Awakens, back in ’83 we were still swimming in the treasures of Jedi. 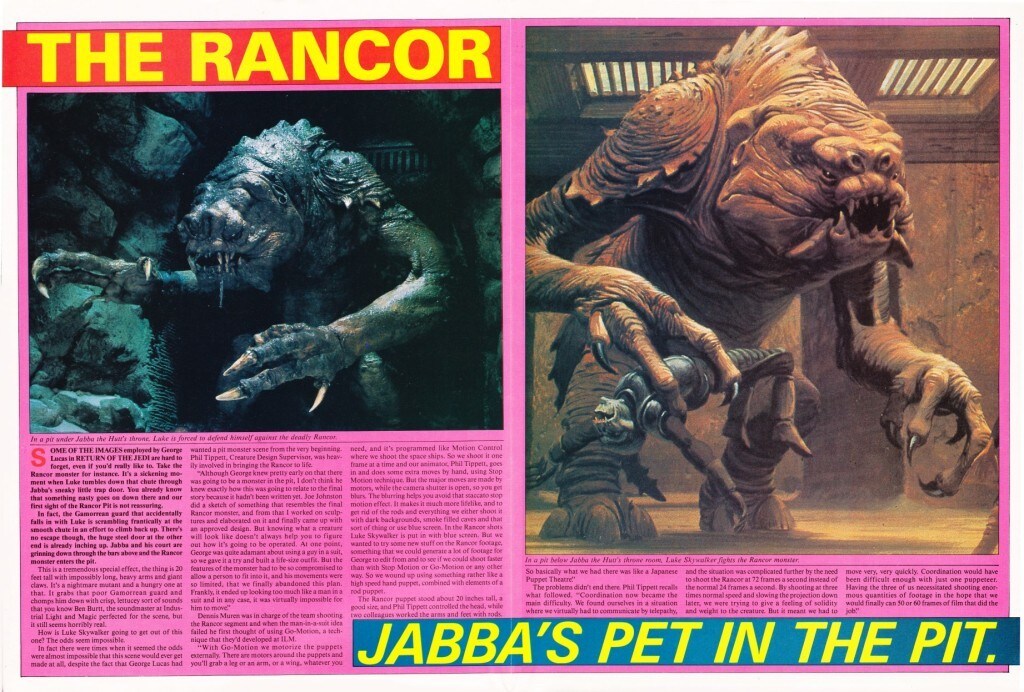 Sitting behind a vivid red cover featuring a classic composite image of the powerful B-wing blasting away from an exploding Star Destroyer, we’re promised a look into the space battle. The headline promises ‘Republic, Empire & Rebellion’, something we wouldn’t be seeing to any great degree until 1999 and The Phantom Menace.

Opening the poster magazine into the first fold we’re greeted by two iconic images. Firstly, a photo of Phil Tippett's gruesome rancor puppet (a piece of movie history I was recently fortunate to see at very close quarters) and on the other page a zoom-in to the rancor as painted by the creator, Ralph McQuarrie. Any page graced by his artwork is the better for it and it gives us a chance to see up close an early version of the Gamorrean Guard. Phil Tippett described the early days of the pit monster.

“Although George knew pretty early on that there was going to be a monster in the pit, I don’t think he knew exactly how this was going to relate to the final story because it hadn’t been written yet. Joe Johnston did a sketch of something that resembles the final Rancor monster, and from that I worked on sculptures and elaborated on it and finally came up with an approved design.”

"At one point George was adamant about using a guy in a suit, so we gave it a try and built a life-size outfit. Frankly it ended up looking too much like a man in a suit and in any case, it was virtually impossible for him to move.”

The design chain of man-in-suit life-size outfits a’la the classic Japanese Godzilla movies of the 50’s and 60’s led to the final puppet, a 20-inch-high beast worked by Tippett in conjunction with two puppeteers who operated the arms via rods in what was essentially a Japanese puppet. 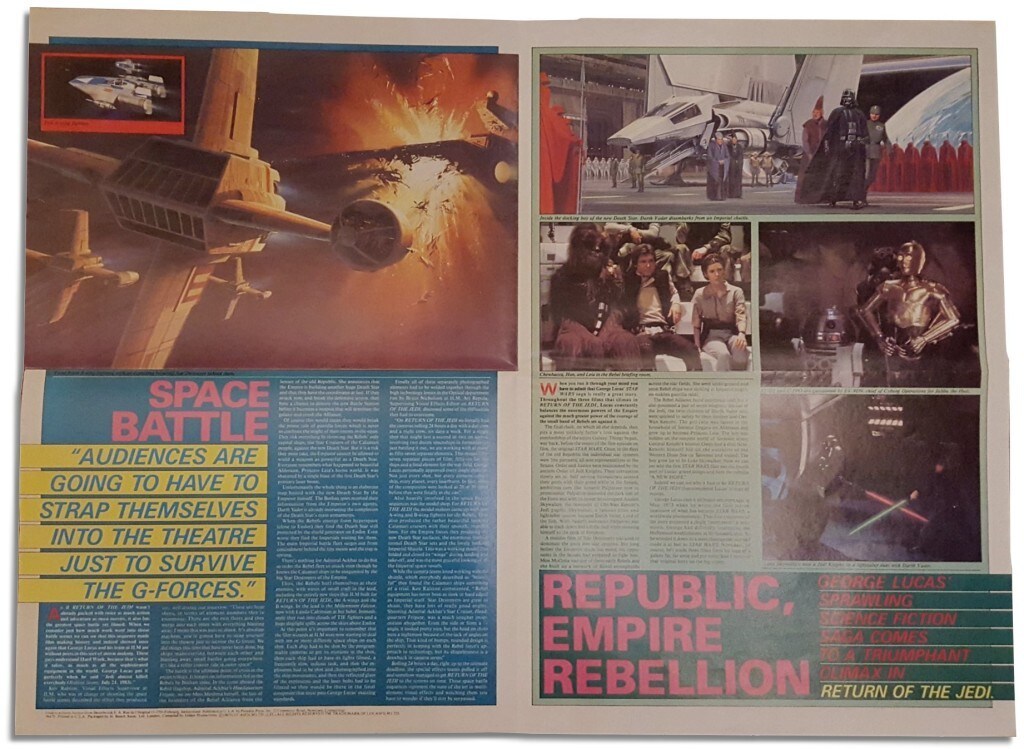 Folding out further we’re greeted by more McQuarrie artwork. His dynamic painting showing B-wings roaring away from a crippled Star Destroyer along with a smaller image showing the newest vehicles in the Rebel fleet, the A-wing. Visual Effects Supervisor Ken Ralston, the man at ILM back in the day, explained just how much work went into those iconic battle scenes from the end of the film, a series of special effects that were never matched in the optical age.

“These are huge shots, in terms of elements numbers they’re enormous. There are two fleets and they merge into each other with everything blasting away. I mean this was nuts to shoot. It’s absolute mayhem, you’re gonna have to strap yourself into the theatre just to survive the g-forces. It’s like a roller coaster ride in outer space.”

Never a truer word said. Another interesting revelation is the history of the regal Mon Mothma. Here she is described as ‘the last of the founders of the Rebel Alliance from the Senate of the old Republic’ before going on to describe her part in the movie. While the alliance plans to throw guerrilla tactics out of the airlock and engage the Empire head on, it’s all a trap set by Emperor Palpatine to end the Rebellion once and for all and enslave Luke Skywalker to the dark side as his new apprentice.

In this current age of computer generated effects and limitless options available to visual effects artists, the thought of limiting the number of elements in each shot may seem antiquated, but back in ’82 and ’83 when these effects were being constructed, it was a huge step. Individual ships had to be shot by programmable cameras in waves, shooting the ship, the lights and other elements. Then explosions needed to be worked into these movements, reflected glare and laser bolts filmed to all be composited into a final shot that then needed to be approved by Lucas himself, and he was an exacting taskmaster.

The opposite page also features a glorious McQuarrie painting showing Darth Vader disembarking from his Lambda-class shuttle aboard the Death Star alongside a selection of images from the film. Entitled ‘Republic, Empire and Rebellion’ the piece takes a look at the finale of the film and the trilogy itself. But most interesting is a look back, before the events of A New Hope to the days of the Republic, when ‘individual star systems were free partners; all sent representatives to the Senate. Order and justice were maintained by the ancient Order of Jedi Knights. The corruption slowly set in.’

Palpatine’s corruption and elevation to power and the dark side are described, as is Mon Mothma’s place in the Senate and Rebellion. We learn of ‘a pair of secret weapons: the last of the Jedi children’. Leia is brought up in the household of Senator Organa on Alderaan while ‘the boy was hidden on the outpost world of Tatooine where general Kenobi’s brother Owen had a dust farm.’ Even as the original trilogy was drawing to a close, our eyes were being drawn back decades to the fall of the Republic and stories and films that still lay 16 years in our future. 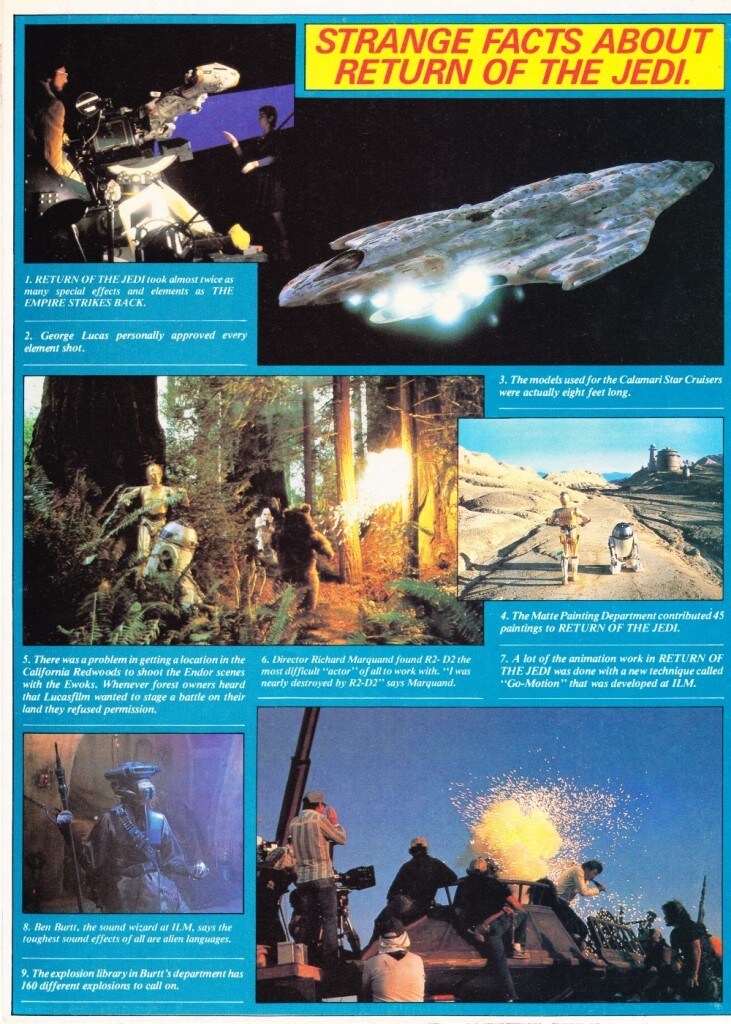 As with the previous episodes, the back page is a cornucopia of Jedi facts. Did you know that Jedi features almost twice as many special effects as The Empire Strikes Back? Or that the models of the Mon Calamari cruisers were a huge eight feet long? Or that everybody’s favorite astromech drove director Richard Marquand to distraction? “I was nearly destroyed by R2-D2.” And perhaps the neatest info of all, Ben Burtt had 160 explosion sound effects in his library to call on. All great facts that are part of the fabric of a film that defined an era and brought to an end the first cinematic age of Star Wars that some of us lucky older fans were privileged to live through.

Mark has contributed to Star Wars Insider for a decade, is the owner of Jedi News, writes for DeAgostini's Build The Millennium Falcon partwork magazine and co-hosts RADIO 1138 and Take Cover on the Jedi News Network. He's a Rebel Legion UK supporter, an honorary member of the UK Garrison and a friend of the Rebel Legion and when he’s not talking, tweeting or writing about Star Wars he can usually be found sleeping where he’ll most likely be dreaming about Star Wars.