See some porgtastic art from this year's event.

Earlier this month, Lucasfilm and Industrial Light & Magic employees once again descended upon the sidewalks of the Letterman Digital Arts Center in San Francisco’s Presidio to show off their best chalk-art skills. After teams of two to four people labored all day on creating their original pieces, it became clear who the real winner of the 6th annual Lucasfilm Sidewalk Art Festival was: porgs. (Which should come as a surprise to absolutely no one.) The ridiculously adorable little creatures could be found in almost every decorated square -- mashed up with everything from Disney movies to Game of Thrones, as is tradition at the event.

This year, voting was open to all attendees, replacing the panel of judges from years past, and each porg, Star Wars, and Disney-inspired chalk work was in the running for 1st, 2nd, and 3rd place, as well as the title of "Best Disney-Themed" and "Best Star Wars-Themed". Check out the prize-winning pieces below as well as some other awesome pieces created by our many brilliant employees! 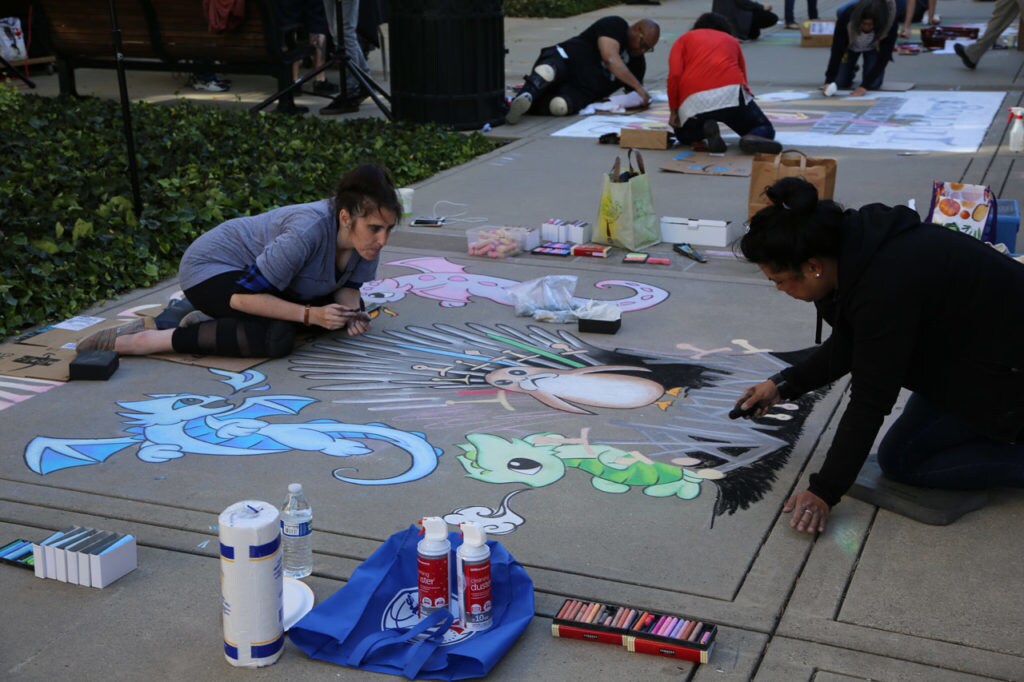 “Ours is a Game of Thrones/Star Wars mash-up. We figured everybody was going to do a porg, so we were looking to do something funny with that character. If you watch Game of Thrones, you’re aware of the phrase, “Valar morghulis.” We changed the 'm' to a 'p' to make it 'Porghulis.' I also really just wanted an excuse to draw dragons, so it worked out well. The design we decided on is the Iron Throne with a scared porg and circling dragons.” -- Sara Garcia 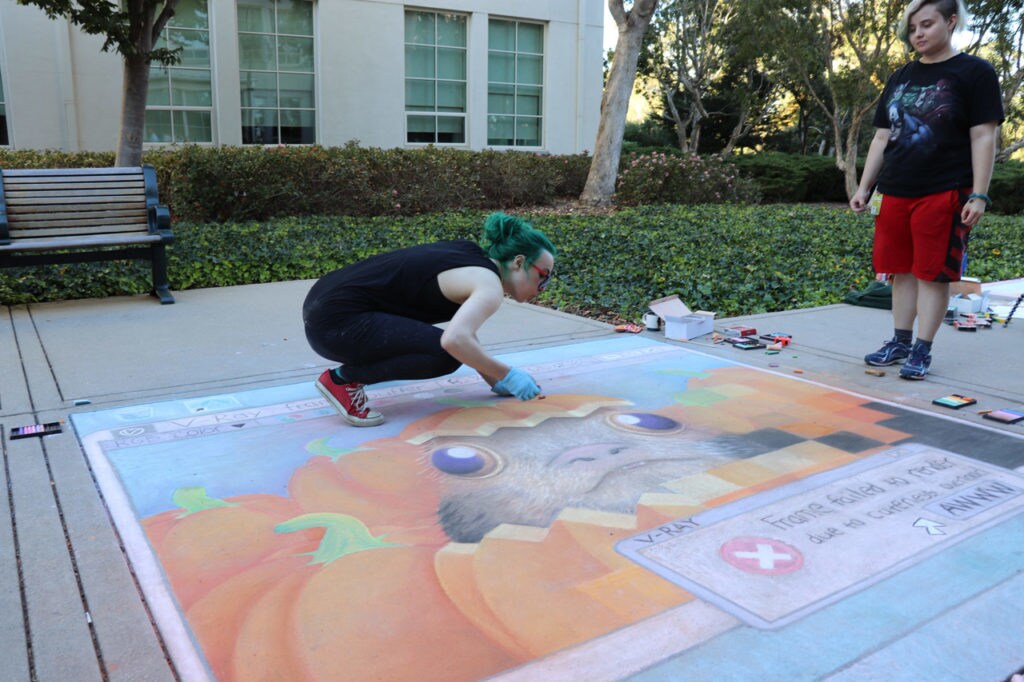 “We’re render PAs, which means we handle a lot of the rendering that comes through for the films ILM works on. Our idea was to do something that reflected what to do in our job. That’s where the whole render panel, ‘image in process of rendering,’ came from. And then, of course the porg was Shona’s idea.” -- Nathan Camp

“We were coming up with our idea and knew we needed something cute, because we wanted the cuteness overload in the render window and I thought, ‘Oh, the porgs are the mascot this year.' And then since it’s close to Halloween, we put it in a pumpkin.” -- Shona Gillard “The idea was for a line-up, like the Usual Suspects. These aren't the porgs you’re looking for. [Laughs] We knew we were going to do porgs but we had a couple of different ideas we were thinking about, which each had different looks. When we settled on this, everyone came up with their own porg look and we put them all together. The concept in essence is, porgs that are trying not to look like porgs.” -- Vince De Mira 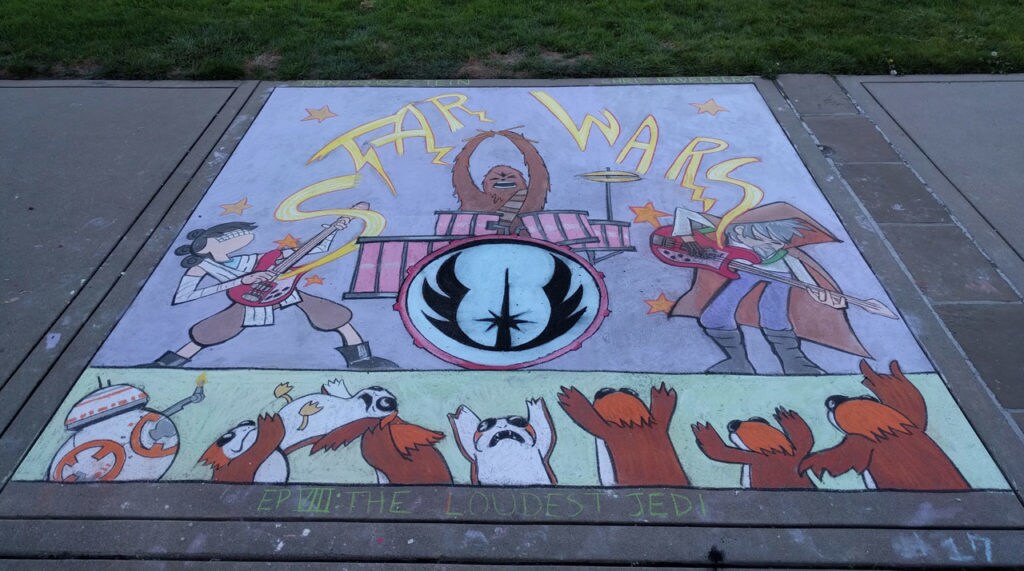 “Chris and I have been doing this since it started about five years ago. One of the things that inspired us is a painting in the lobby called 'Star Wars Rocks' which has the original Star Wars characters, Luke, Princess Leia, Han Solo, all playing a rock show. We thought we would update that with the Episode VIII characters and then we chose the style of a comic book called Scott Pilgrim, which I’ve been reading recently. So the process has been just putting all those pieces together. Everybody’s been including porgs this year, so we felt like we should put them in. Chris had this great idea that they’re like the audience and they’ve got rock poses and the mosh pit. BB-8 with the lighter just kind of made sense.” -- John Doublestein “It’s the 15th anniversary of Lilo & Stitch, and we wanted to honor that because it’s such an awesome little movie. We married it with Rogue One, and came up with the idea of playing Rogue One on the beach. We have the citadel from Scarif where they retrieve the Death Star plans from in the background, and Stitch is dressed up as the bad guy, and Lilo is sporting some Jin Erso hair. They’re just having fun on the beach.” -- Rebecca Forth “We did a Haunted Mansion mash-up. I’m sure we’re not the first people to think of this, but we had the idea that it would be cool to put the Force ghost from the end of Return of the Jedi into the piece as the hitchhiking ghosts. We tried to kind of stick to the poster theme. The ride posters at Disneyland are huge so we didn’t just want to do the entire square, we wanted it to have that poster kind of cut-out.” -- Mitchel Mejia “We’re from ILMxLAB so we work on AR and VR. This year we decided we wanted to add an AR kit, since that’s been the kind of thing we’ve been releasing lately so we wanted to bring that element to our chalk art.” -- Sarah Barrick

“The Mary Poppins idea came from the jumping into the painting scene. It’s a very VR concept in the movie. [Laughs]" -- Kyler McLaughlin 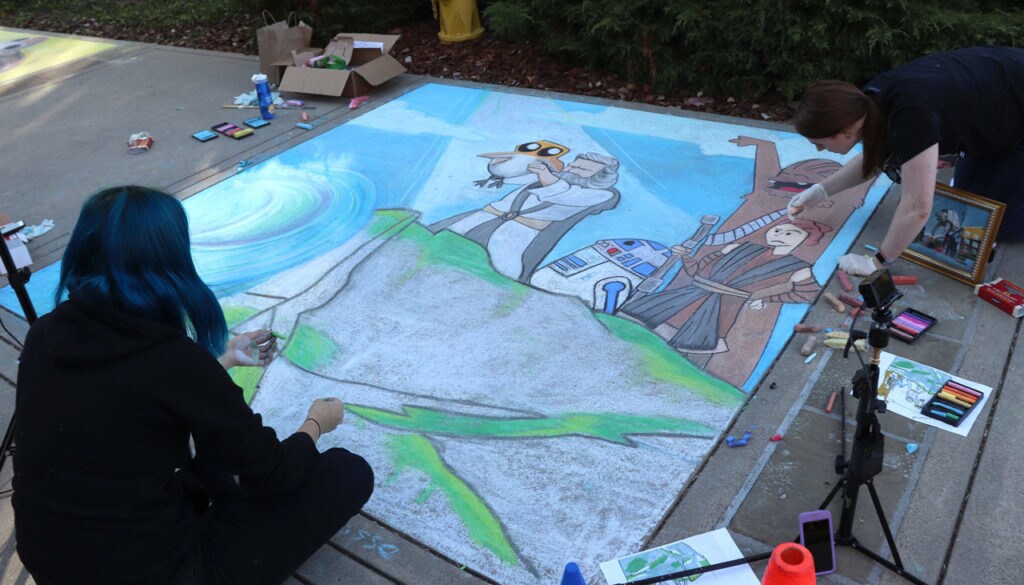 “Our concept is putting a little bit spin on The Last Jedi. We’re playing off The Lion King, with having the porgs being lifted up. Luke loves the porgs more than Rey, so she’s kind of pissed off that she traveled so far and he’s lifting up the porgs instead of her. We thought it was a funny take.” -- Bailey Crowder

“Porgs were cute so we started there. Turns out everybody has a porg in their artwork. [Laughs] It was a 5-minute decision making process to put a porg in ours. [Laughs] Harrison did all of the artwork...We all worked on coming up with different names for our piece and I believe Renee came up with Hitchalks.” -- Akanksha Sahu

Anina Walas is an operations and production coordinator with the Star Wars online team. She loves pretty much everything Disney, great weather, making/eating really good food, and of course, Star Wars. You can follow her on Twitter @aninaden, but beware, she’s terribly inconsistent about tweeting things.