StarWars.com presents a first look at the ongoing series, with insights from writer Cavan Scott, to take fans back to the prime of the Jedi Order.

There’s something at once novel and familiar about the new era of Star Wars storytelling, a fact made immediately clear by the initial pages of the upcoming Marvel Star Wars: The High Republic comic series. “You’ll see things you never expected in a Star Wars story,” says writer Cavan Scott.

The era, set some 200 years before the events in Star Wars: The Phantom Menace, has only been glimpsed in concept art showing bold new characters and hinting at a more opulent era for the Jedi peacekeepers. Now, we’re ready to take our first steps into that sumptuous world, with interior pages as well as a cover by artist Phil Noto.

Scott was part of the core team of authors who gathered at Skywalker Ranch in 2018 to help forge a path for the interwoven tales that the project would encompass. “I came up with the character of Keeve Trennis in our first Project Luminous summit,” Scott says. “Now to see her coming to life through Ario [Anindito] and Mark [Morales'] art is wonderful.” In the pages below we find the fierce young Padawan Keeve focused on her training and trying to prove herself to her teacher, the Trandoshan Jedi Master Sskeer, who seems to have experienced a very common problem in Star Wars: He’s missing an arm.

“The pages the art team have been putting together are just beautiful,” Scott says. “Keeve is exactly how I imagined. No, actually she is a lot more. The facial expressions Ario has given her in these early pages helped inform the way her character responded to events in later issues. That’s what I love about comics. It’s a true collaboration.”

Behind the scenes, Scott and Anindito met via Zoom call to discuss the series early on, but the conversation devolved into two hours of gushing about their mutual interests. “Before we got started on the pages, Ario and I got together and we geeked out completely about our love for comics in general and Star Wars in particular, even getting to the point when it all became a bit ’show and tell’ with us pulling out our favorite Star Wars figures and toys,” Scott says.

After all, part of the fun of creating Star Wars today is drawing on the decades of lore already in existence with creators who first fell in love with the saga as fans. “Helping build this part of the Star Wars mythos is a dream for all of us at Marvel,” says Marvel editor Mark Paniccia. For instance, the small winged creatures Keeve encounters on Shuraden are the Ximpi, “a race that one of my fellow High Republic story architects, Charles Soule, created for the Lando Calrissian mini-series back in 2016,” Scott adds. “I loved them then and when they popped up again in Doctor Aphra, I couldn’t resist going to their home planet. One thing we’ll learn about Keeve is that she’s always picking up waifs and strays on her travels. She just can’t help herself.”

In StarWars.com’s exclusive preview at the debut issue’s first few pages, we get our first look at the master and apprentice in action, as Keeve begins her Jedi trial under the watchful gaze of her master, Sskeer. “But of course, not everything goes to plan…” Scott says. 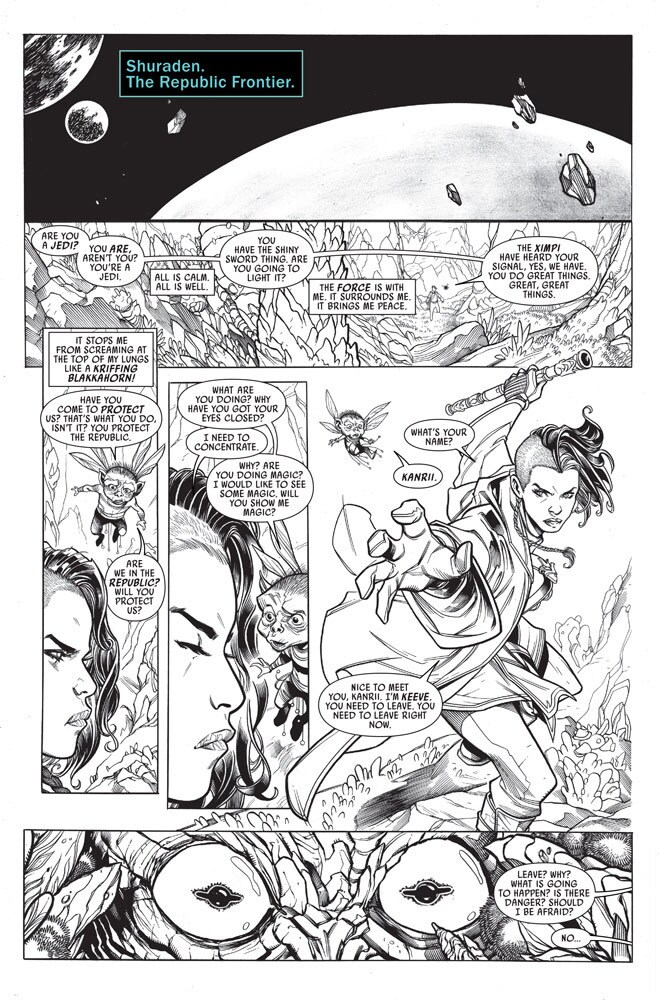