Mark Hamill Reflects on Star Wars at the Egyptian Theatre In his portrayal of Luke Skywalker, Mark Hamill encapsulated everything that Star Wars was meant to be and is. He brought an adventurous energy, a good spirit, and a sense of emotional growth to the role -- traits that were essential to conveying the story's themes and to making Luke an iconic hero.

At Saturday’s thirtieth anniversary celebration of Return of the Jedi at the Egyptian Theatre in Hollywood -- part of Entertainment Weekly's CapeTown Film Fest -- Hamill made a surprise appearance after the 6:00 p.m. screening of the film. When EW writer and host Anthony Breznican asked if anyone could do a good Luke Skywalker impression, Hamill emerged, making a dramatic entrance that could rival Luke’s own “I’m with you, too!” moment from Jedi. He took part in two Q&As, discussing some specifics on Return of the Jedi and the exciting future of Star Wars.

Between Q&As, Hamill spoke to StarWars.com about what the entire saga was like for him as an actor, and the different challenges he faced in making a space fantasy believable. As it turns out, Hamill's prior experience helped prepare him.

"When I was doing The Texas Wheelers," he said, "we would be in our pickup truck all the time, which would be just the cabin of the truck on a soundstage with people rocking it and rear screen. And that's no bigger leap of imagination, because you're not really out in a truck, really out on the road, than when you're sailing through the stars in the Millennium Falcon. It's just a different way to use your imagination."

But Star Wars presented Hamill with a new challenge, as well: performing with non-human characters, from puppets to actors in costume, including several scenes featuring a bickering droid duo. “My first real test of fire was when I was working with the robots in the first one," he said. "I really understood comedy. I really understood why Jimmy Finlayson was so important to Laurel and Hardy. I really understood why Richard Deacon was so effective on The Dick Van Dyke Show. I understand the role of a straight man, and I knew if I set them up, it would be even funnier. So I really got my role in that." It was The Empire Strikes Back's scenes featuring Hamill with a small green puppet that required a dramatic believability, and it was a risk -- the movie could collapse under the weight of those segments if they didn't work. But Hamill was confident. "The biggest test was with Yoda," he said. "The minute I watched Stuart [Freeborn] sculpt the thing, I really was enamored. As soon as Frank [Oz] put that on his arm, I was just there. Even when he was using the mockup, the one that wasn’t fully articulated. His voice, my understanding of the script, and then just to have an approximation of Yoda there, it was no problem for me. And I think one of the greatest tributes I had as an actor was that no one in any of the reviews said, ‘He has a remarkable facility for working with sponge rubber and mechanical props.’ They didn’t mention it. As Frank Oz said, ‘That is the greatest compliment of all. Because if you didn’t believe it, nobody would believe it.’ Now, I think he’s going too far in his praise, because Frank is just a really generous guy. I just think he’s absolutely beyond brilliant." 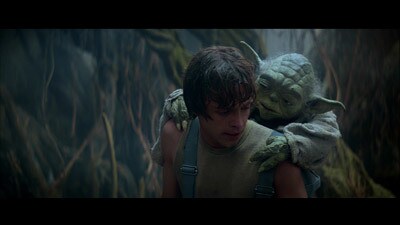 The scenes in Empire featuring Luke and Yoda went on to become crucial for the entire saga, showing the young Jedi's shortcomings, his maturation, and establishing Yoda as a major figure. Return of the Jedi has "more creatures," Hamill enthusiastically acknowledged, and it's a film in which he has even more scenes involving incredible physical constructs like Jabba, his henchmen, and a final visit with Yoda. For Hamill, this kind of work was a joy across all the films. "I loved it. It was just so much of what I dreamed of doing when I was a little kid. I loved Paul Winchell, I loved Beany and Cecil, I loved all of those things. Puppets and cartoons and comic strips and comic books. I never dreamed that I would be a grownup that would be paid to do what I was doing. And I didn’t take it for granted."

But Hamill also prefers to keep the films as a memory, not revisiting them as often as one would think. “To tell you the truth," he said of Return of the Jedi, "I haven’t seen it since they did the re-release with the first Special Editions [in 1997]. I saw all the movies when they came out. And sometimes more than once because of premieres. You know, there’d be one in New York, and then you go and see it in London, one with the royal family in Japan. I’ve never watched them at home. But then George [Lucas] did the Special Editions, and my kids were just mad for me to go. I said, 'Oh, well, I don't wanna.' I always use the analogy, 'When’s the last time you looked through your old high school yearbook?' And they said, ‘But we want to see them on the big screen!’ And I thought, well that’s a compelling argument. That’s the way they’re meant to be seen. So I went and saw Star Wars, I saw Empire, and I saw Jedi once more.”

In the first post-screening Q&A, Hamill spoke about his initial feeling on what the story of Jedi would be when he started reading the script. "I thought, 'Oh, I know where this thing is going. I've got one mechanical hand now. I'm all in black. I'm well on my way to the dark side.' I thought that was going to be the plot of the third one, that Luke is tempted back and forth. And I thought the great fake out would be to make the audience believe that I went awry, and at the last possible moment save either Carrie [Fisher] or Harrison [Ford] from death and that would be the twist." Hamill also joked about being disappointed that Leia would be revealed as his sister, and that the Rebels would have to face a second Death Star. But he also acknowledged that when they made Star Wars, there was no guarantee they would get to finish the trilogy. Had Lucas had a contract for all three, he probably would have saved the Death Star attack as the original trilogy's climax. As for whether or not he felt that Jedi, Episode VI, was the final Star Wars film once shooting wrapped? "Absolutely the last," he said. "We had a beginning, a middle, and an end. I remember the very first week of shooting. I was talking to George [Lucas] then, and he talked about how originally it was going to be four trilogies of 12 [films]. Then he said, 'And we cobbled it down to three trilogies of nine.' I said, ‘Why are we starting in the middle?’ He said, ‘Well, um, this trilogy is the most commercial.'" Hamill didn't really know what the sequel trilogy would be, either. "I don't even think I believed that the third trilogy would feature us. I thought it would be all different characters. To my knowledge, we were just going to do a beginning, a middle, and an end, and it was over. So the feeling on the set when we were doing [Jedi], was really like the end of a semester, the last couple of months of school. Clear out your locker and bring your gym clothes home and all that. It was mixed feelings because everyone was anxious to complete the mission of doing the three, but we also knew it would be the last time we would see everybody. You know, I'm still in a state of shock that they want to do more." Hamill recounted the story of when Lucas asked him and Carrie Fisher to lunch and told him the news: there would be an Episode VII and a new trilogy.

When it comes to Episode VII, Hamill admittedly doesn't know much. But he revealed that he's had a creative meeting with Kathleen Kennedy, during which he expressed something that's important to him about the making of the new films. "I said, 'We've got to find a proper balance between CGI and old-school models.'...I think there's nothing wrong with CGI, but I think you have to have a balance. Because the camera perceives the width and the depth and the weight, even if it's a miniature model. The camera just realizes that. And so when you have too much CGI... If the clouds are CGI, the trees are CGI, and the buildings are CGI, you're getting to the point where it's a hybrid of an animated film and live action. And I want to have a more organic look so that we don't get into Roger Rabbit territory." This was met with huge applause, but Hamill added a qualifier. "I don't imagine their top priority is what I want."

Hamill, a recent BAFTA winner for his turn as the Joker in Arkham City, currently stars in four animated series, including Regular Show and Dragons: Riders of Berk, and has an upcoming guest spot on Criminal Minds. But it's also nice to know that Return of the Jedi was not the final Star Wars semester after all -- and that Hamill is excited at the possibility of donning a Jedi cloak once again.