Krystina Arielle's Journey from the Red Carpet to the Star Wars: The High Republic Show

The actor, cosplayer, and mom of two shares why Star Wars has always been such a deeply personal passion.

Krystina Arielle had only been in Los Angeles for a couple years, after driving her most prized possessions cross-country from her home state of Georgia, when she stumbled upon the red carpet premiere for Rogue One: A Star Wars Story. From the outside looking in, she could just glimpse the spectacle inside, but she vowed then and there to have the chance to see it for herself one day. “I want to go to one of those!” she says.

A year and a half later, that’s exactly what she did. Modeling a Lando Calrissian-inspired cosplay, Krystina landed an invitation to be among the fans attending the world premiere of Solo: A Star Wars Story. In very L.A. fashion, she had previously met Donald Glover on a local playground and mentioned her love of Star Wars and cosplay. When the actor saw her flanking the red carpet he paused to say hello. “He was like ‘Hey! You do have a Lando cosplay!’” she recalls with a laugh. Billy Dee Williams, who originated the role, also stopped to talk to her, she says, and Thandie Newton, who played Val in the film, darted across the red carpet to embrace her. “Thandie Newton -- in her heels -- runs past Rupaul, and gives me a hug,” Krystina says with wide-eyed wonder.

For the longtime Star Wars fan, it was an unforgettable night. Today, she shares her love of the galaxy far, far away in a more formal fashion, as the host of the new online series, Star Wars: The High Republic Show. The show combines Ariellle’s passion for pop culture with her infectious smile and exuberant laugh, welcoming fans along for a journey discovering the new era in Star Wars storytelling. There will, undoubtedly, be puns and campy, sometimes over-the-top humor. “I just think that puns are fantastic,” she says.

Before you watch along, allow us to introduce the fan, cosplayer, wife, mother, actor, tabletop gamer, and host...

All in the family

For Krystina, her love of Star Wars is deeply personal and started, as it has for many fans, when she was still young enough to spend her mornings lounging around in her favorite pink footie pajamas. She discovered Star Wars not through the films but through the Ewoks cartoon when she was about 3 and a half. A love of science-fiction and fantasy runs in her family. “I watched it with my grandpa, Jack. I watched it with my stepdad, Jerry Gaines,” she says. “He passed away April 25th from COVID and a lot of things are very dear because they’re things that I shared with him or things that I shared with my grandfather. To be able to lean into my interests for my job now is really pretty cool.”

By the time Krystina was in high school, the prequels were in theaters. Star Wars: Attack of the Clones was the first Star Wars movie Krystina saw on the big screen, she says, and she was hooked. Already a fan of Hayden Christensen and Natalie Portman -- “I had watched every Natalie Portman move that exists,” she says -- their portrayals of Anakin Skywalker and Padmé Amidala captured her imagination. “There’s something about Star Wars that I just kind of fell in love with.”

Years later, when Krystina was pregnant with her now 1 and a half year old son, she paid homage to the queen and senator with a cosplay of the flowy purple and cream gown from Star Wars: Revenge of the Sith. Krystina’s only regret? She didn’t get a chance to recreate every pregnant Padmé look over those nine months. “I wanted to do the ‘Anakin you're breaking my heart’ outfit,” she says, her voice morphing into a recreation of the line. “Padmé’s all the months pregnant with twins and is out in these streets with this amazing outfit, a low braided bun, with one piece down -- which I did try to do on my hair the other day. I think about that a lot.”

The power of cosplay

Krystina’s affinity for cosplay started organically during a St. Patrick’s Day trip to Atlanta, Georgia, that happened to coincide with MomoCon. When they started seeing covetable costumed characters roaming the streets, Krystina says she turned to her best friend and said, “Follow the people with the tails!” The convention was in the same hotel where they were staying and inspired Krystina to attend her first DragonCon soon after, dressed as Star Trek icon Lt. Nyota Uhura. After moving to L.A. in 2014, trekking cross-country with a car packed full of her clothes, costumes and books, she got more into the cosplay community. In the years since she’s dressed as Padmé, Lando, and Rey.

“I just love putting on costumes and becoming characters. And I like not necessarily doing a cosplay of an actor playing a character, but being myself as a character. So reimagining the hair, putting different kinds of touches on it, just being able to feel powerful as character or feel evil as character.” For instance, as Rey, Krystina sports three Afro puffs, putting her own unique spin on the scavenger from Jakku. “The one thing I truly, truly want to do is a full Han Solo with two puffs,” she says, positioned like Leia’s trademark buns. “I’m waiting until my hair gets much bigger for an in-depth Leia. It’s my goal to try out every different Leia hairstyle in a natural hairstyle fashion.”

Krystina gravitates toward strong characters, including a gender bent Captain America, but many of her cosplays are tough heroines and complex characters, like Padmé. “She saved herself. She got herself out of situations. She was strong. She was as senator. She was a queen. She was all of these things, but she was smart. She was a nuanced character and just to be strong and smart and capable, I love that about a character.” With Rey, her adoration of the character stems from the way she sees her 8-year-old stepson, niece, and other children responding to her strength. “The thing about Rey for me was I like seeing how younger people look at these characters. That’s their entrance into this fandom and this is the generation that my kids are a part of and these are their entry point. And I want them to be able to see a strong female character at the forefront.”

Representation is deeply important to Krystina, who says her husband helped her create a “Wall of Representation” vision board in their home. What started as magazine clippings and covers to inspire her journey as an actor -- “If I can see these people maybe I can one day be one,” she says, -- now includes her own first magazine spread in Cosplay Culture magazine. And in the center of the wall sits a stylized image of several Star Wars characters, including Leia, Darth Vader, Padmé and Finn. For Krystina, cosplay and roleplaying games are an essential part of exploring her own creativity. During the interview, she’s perched in front of a set of massive white-feathered wings, a recent acquisition into her covetable costume closet. “I just love anything where I can be creative. I’m an entertainer by nature, so for me anything where I can be over the top and super campy, I am here for it because I am an extremely flamboyant as a person!”

Her trek from working in real estate just under 4 years ago to hosting a new Star Wars show has, in a word, been “wild,” she says. The debut of her show today marks a full-circle moment for the little girl who adored Star Wars and moved to LA, wanting more than anything to be a part of it. “I love Star Wars and it’s something I’ve shared with my family and with friends at very pivotal points in my life. It’s important to me and it’s very exciting to be a part of this.”And it’s clear she doesn’t take it lightly, speaking with reverence and respect for the galaxy that George Lucas first envisioned. “It’s a big opportunity as well as a big responsibility.”

In bi-monthly installments, Krystina will lead fans on a deep dive Star Wars: The High Republic. “As its expanding, as we’re learning more about it, we’re going to sit down with the authors and have round tables,” she says. “I’m really excited to discuss the books, to see what the motivations were behind it. Just the chance to interact with Star Wars fans in general and give them this information and learn this information with them. I think that’s the biggest part for me: just for all of us to be on this ride together, to be learning these things together.” 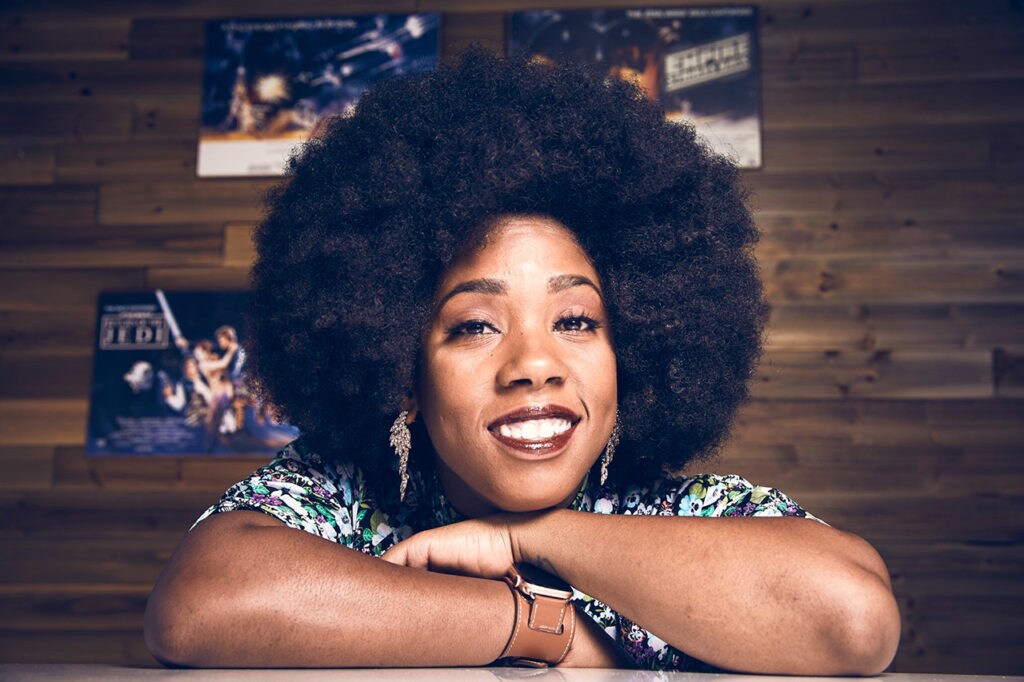 After her son’s birth, the first movie she saw in theaters was Star Wars: The Rise of Skywalker. But while she couldn’t wait to see the final film in the Skywalker saga, her excitement for Star Wars: The High Republic stems from its accessibility in exploring a whole new era. “There’s so much that can be discovered. We’re all experiencing new Star Wars together,” she says. “Across the board, it’s a fresh start for so many and it doesn’t matter what you know about the Skywalker saga. Anybody can start it. It’s a new game. And I’m in the passenger seat with you. We’re all learning it together. We’re all getting new information together. I’m just really excited -- viscerally over the moon! -- to go and dive into this.”

The Star Wars: The High Republic Show premiered today on StarWars.com and the official Star Wars YouTube channel. Watch the first episode below!

Associate Editor Kristin Baver is the author of the book Skywalker: A Family at War, host of This Week! In Star Wars, and an all-around sci-fi nerd who always has just one more question in an inexhaustible list of curiosities. Sometimes she blurts out “It’s a trap!” even when it’s not. Follow her on Twitter @KristinBaver.