StarWars.com speaks with the talented fan about building the space station and following in the footsteps of his ILM heroes.

Jason Eaton grew up worshipping at the altar of Joe Johnston and the wizards of Industrial Light & Magic. Eaton saw Star Wars: A New Hope in 1977 at age four, spurring a lifelong love of the galaxy far, far away -- but it was the behind-the-scenes model making magic that truly captured his imagination. Over the years he developed incredible skill at the craft, building his own models from nothing just like his ILM heroes; the results, as documented previously on StarWars.com and Lucasfilm’s Our Star Wars Stories digital series, are often astounding. Still, model making has served mostly as a (time-consuming and physically demanding) hobby for Eaton, who never thought his interest and gifts would go any farther. “I want to walk a mile in the shoes of the ILM model maker. You can’t. That world doesn’t exist anymore. But you can get kinda close,” Eaton said on Our Star Wars Stories. Except he was wrong. 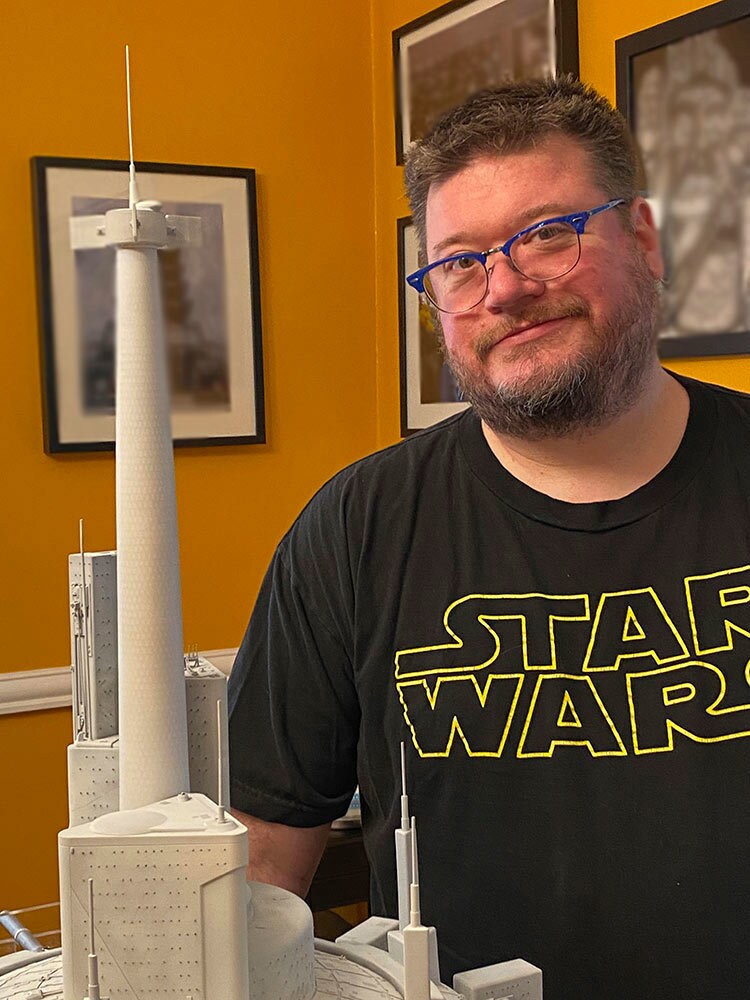 Lucasfilm has hired Eaton to build a model of the Starlight Beacon, a massive space station recently introduced in Star Wars: The High Republic, to be used for the StarWars.com team’s Star Wars: The High Republic Show. Revealed on the latest episode of the digital series, it’s a stunning realization of the Starlight Beacon, filled with detail and a few surprises -- an elegant space station for a more civilized age.

The opportunity was one he ever expected, to say the least.

“I got the call asking if I wanted to do it. There was that initial [thought], ‘Wait, are you asking me to do what I’ve dreamt about since I was four years old? I had to process it for a second,” Eaton tells StarWars.com. “The idea, to me, of making something official for Star Wars from concept art, I thought was unattainable.”

After that initial shock, Eaton first, and most importantly, said yes, and then quickly got to work. “The gut reaction is like, I’m completely floored and honored. And then I get down to business and I never even think, ‘Can I pull it off,’ because if you get in your head like that, you might trip up.” He was provided with just three pieces of concept art, and there were blind spots, as the Starlight Beacon was only designed for use in books and comics. So Eaton really would need to bring the station to life just like the ILMers of old, working off the art provided but filling in some details and sections on his own. High Republic Show producer John Harper explained the parameters: it needed to be three-feet-tall, it needed lights of some sort, and the Story Group would offer feedback. 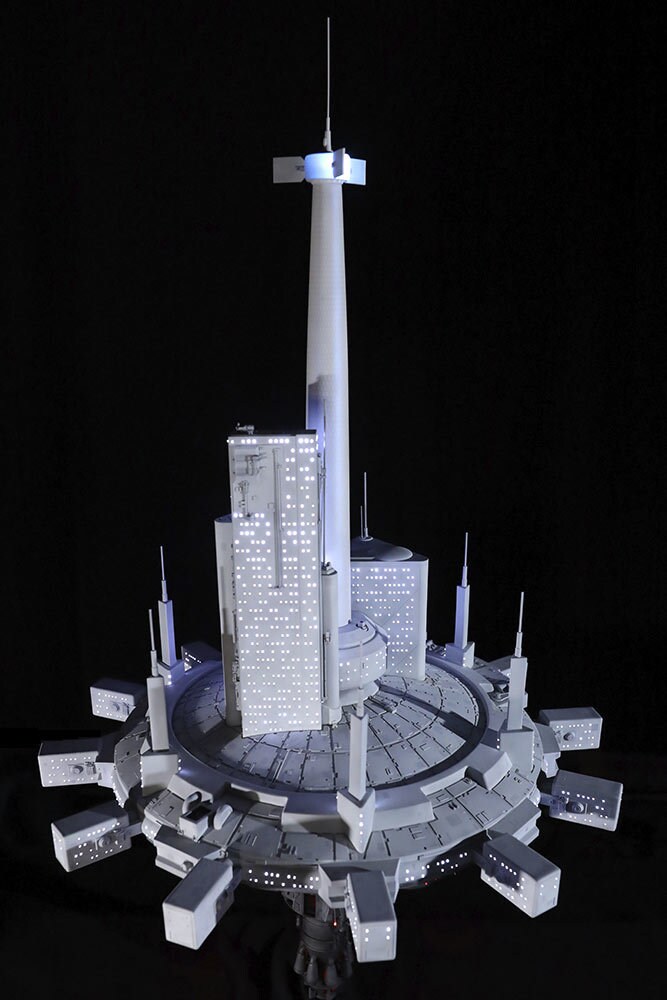 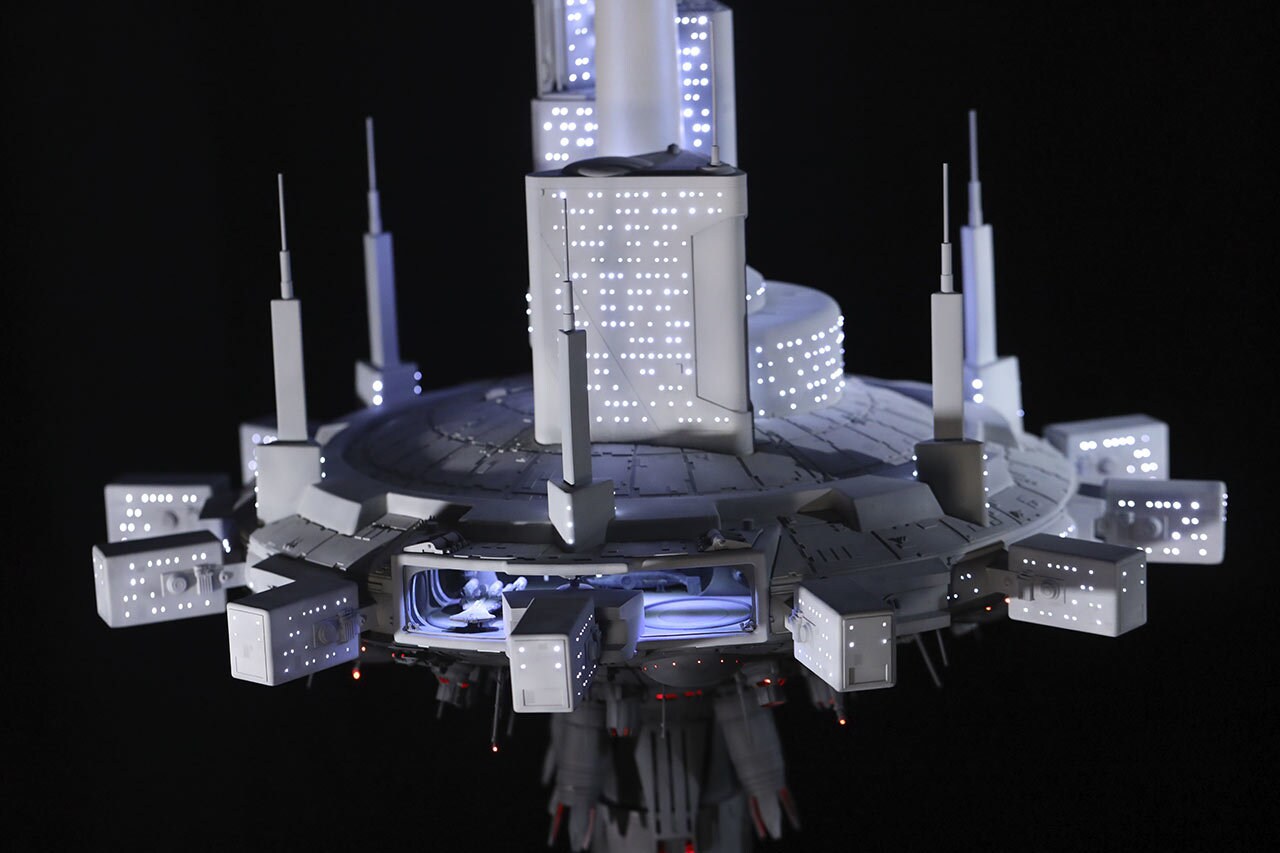 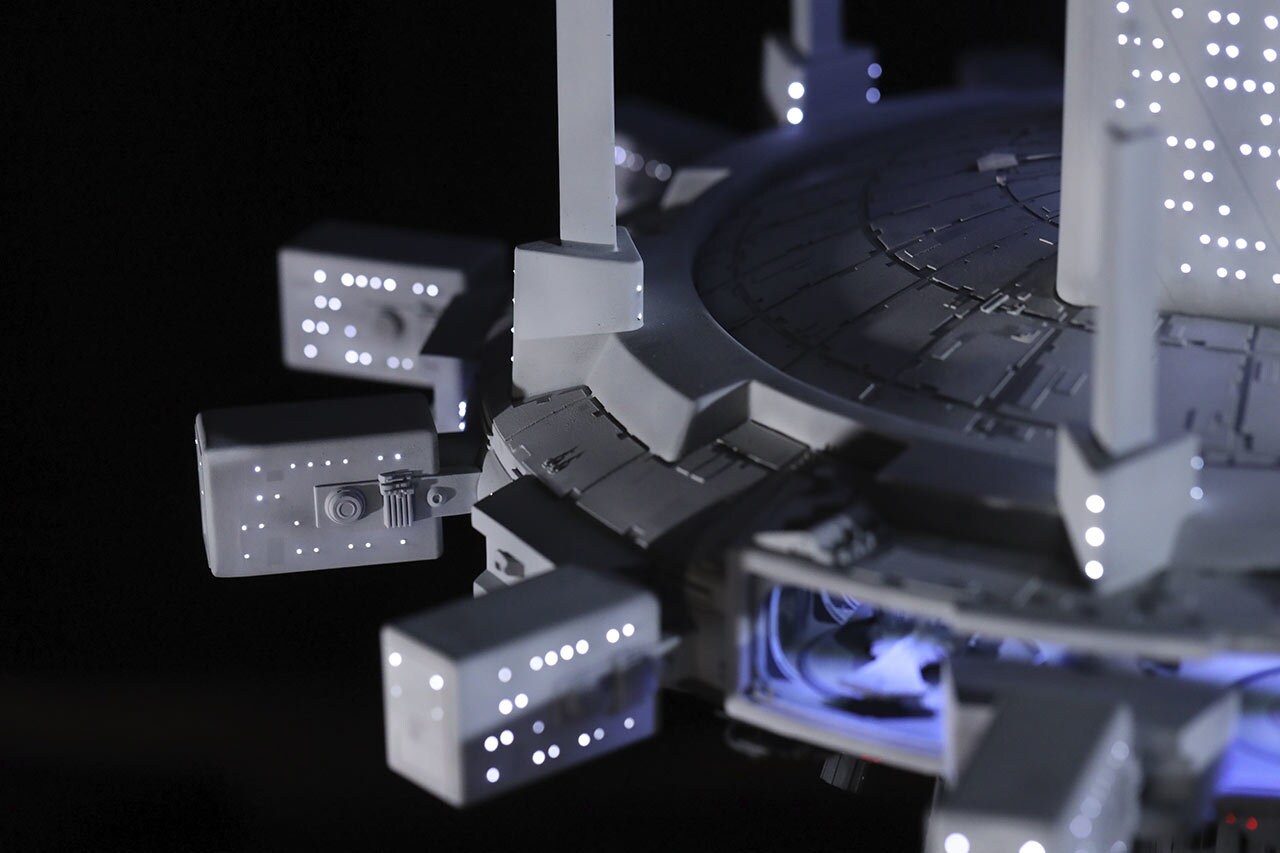 The Starlight Beacon’s main features include a large saucer, several spires of varying size, and a docking bay. Eaton first met with the Story Group to figure out scale and certain details, like whether some blast doors should be open or closed and the types of texture the Beacon exterior might have. With most questions answered, it was time to actually design and build the model.

“I, of course, completely went overboard,” he says. “Partly because, if this is going to be my only chance to make something official, I’m going to make it as nice as I can with the time allotted.” 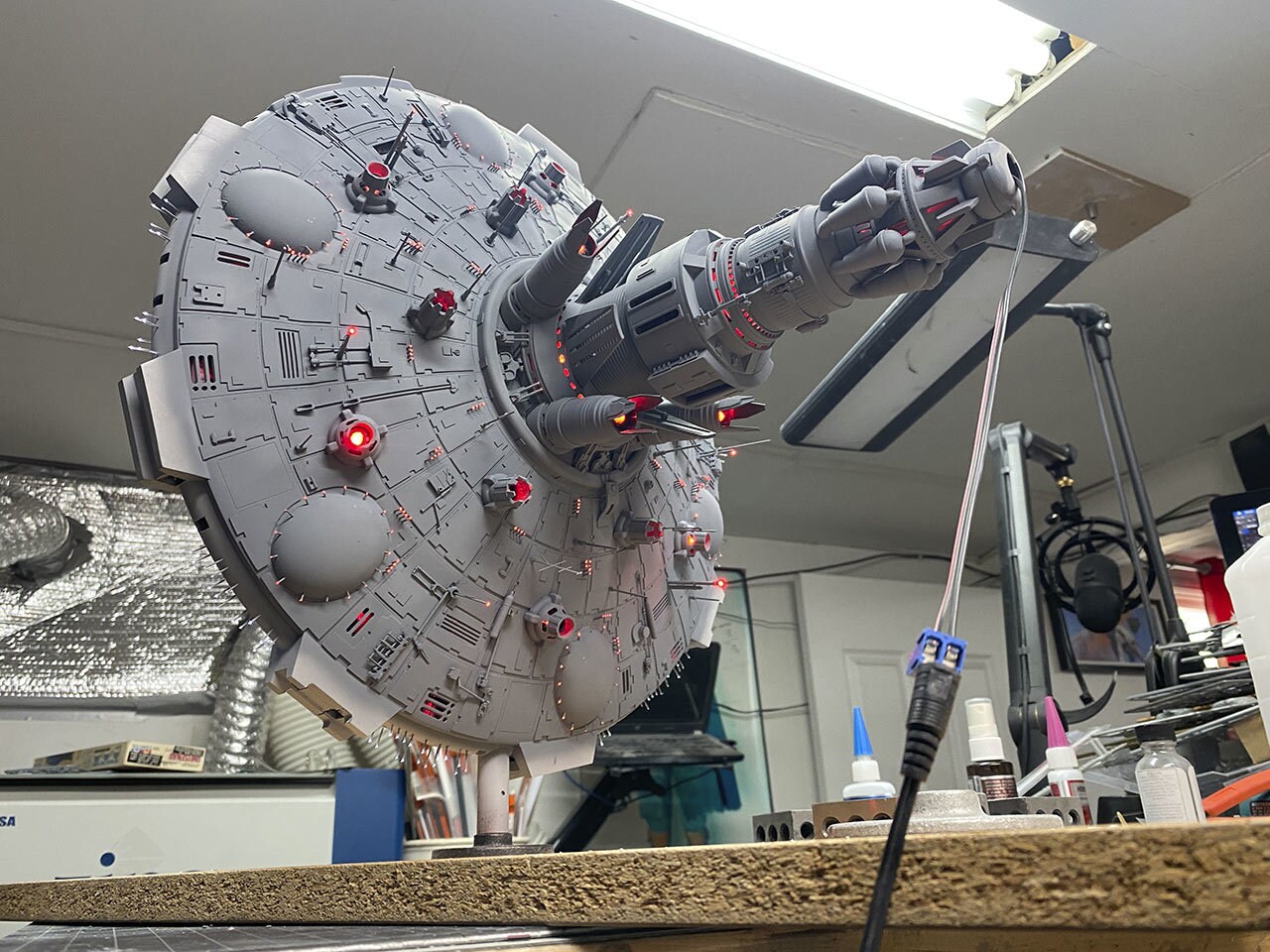 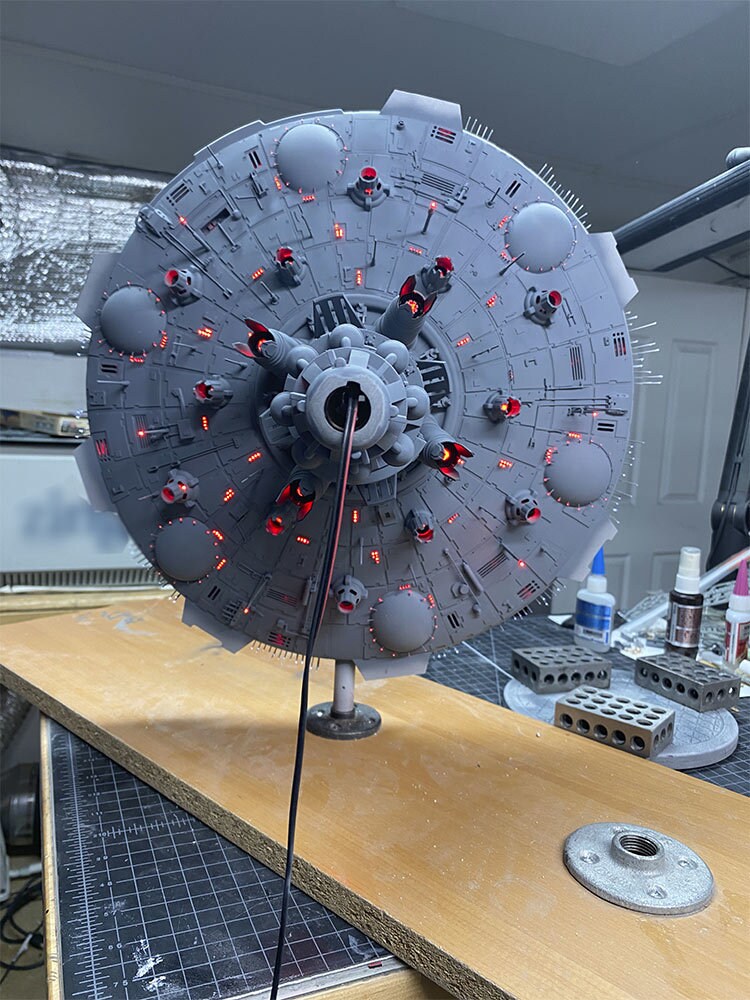 In building the model, Eaton tried to use traditional, ‘70s ILM methods as much as possible while taking advantage of modern tech. “I started modeling everything in 3D, but just the base shapes. If this was like, 1979, it would have been machined on a lathe or mill out of foam or acrylic, and I don’t have that kind of big gear in my basement shop. But I do have 3D printers,” he says. “So I thought, ‘Alright, I’m going to print the main forms, assemble it together, and then use traditional methods to detail everything out. And it worked perfectly.” Those “traditional methods” include scouring model kits for random parts that provide detail, a styrene sheet that’s cut out for armor plating, and brass rods. There’s even some original Star Wars hardware incorporated. “An ILMer, a couple of years ago, gave me a bunch of stuff from his storage. To him it’s almost garbage,” Eaton says laughing. “But there were a whole bunch of pieces of this material called Kool Shade. It was a building material, used between double panes of glass to sandwich a bronze louver material that’s woven. It’s beautiful up close. And that’s what they used for the TIE fighter solar wings. I was given a whole bunch of that material from the first production. I thought it would be really cool to pull something in from 1975 or ’76 into this model -- the soul of Star Wars. So there’s a section on the bottom where there’s some cutouts and I backed it with Kool Shade. And not only did I back it with Kool Shade, I used leftover material from Star Wars. That was another thing where I was like, Ha ha ha! That’s perfect!” Still, that’s not all the Star Wars history imbued in the model.

The Story Group asked if some ships could be included in the build, as the Starlight Beacon has ports and landing platforms. Eaton immediately thought of the Crucible, the ship where resides Star Wars: The Clone Wars’ Huyang, an ancient droid that keeps lightsaber parts for Padawans. It was immediately approved. But for a ship at the back of the model, Eaton had an idea to do something even more special.

Eaton knew of an unused design by A New Hope production designer John Barry -- a colony ship that was meant to be seen crashed on Tatooine outside the cantina. Eaton had a friend that sculpted a 3D model of the craft and asked to borrow the files, but wouldn’t say why he needed them. “I thought this would be an incredible Easter egg to throw in there, because if you know it, you know it, and if you don’t and it’s explained to you, it kind of blows your mind a little bit,” he says. “I asked the Story Group, and they were like, ‘Yeah! That’s fun.’” Eaton made some subtle changes to the ship, ensuring it would fit where needed and effectively bringing a long-lost Star Wars craft back to the saga. 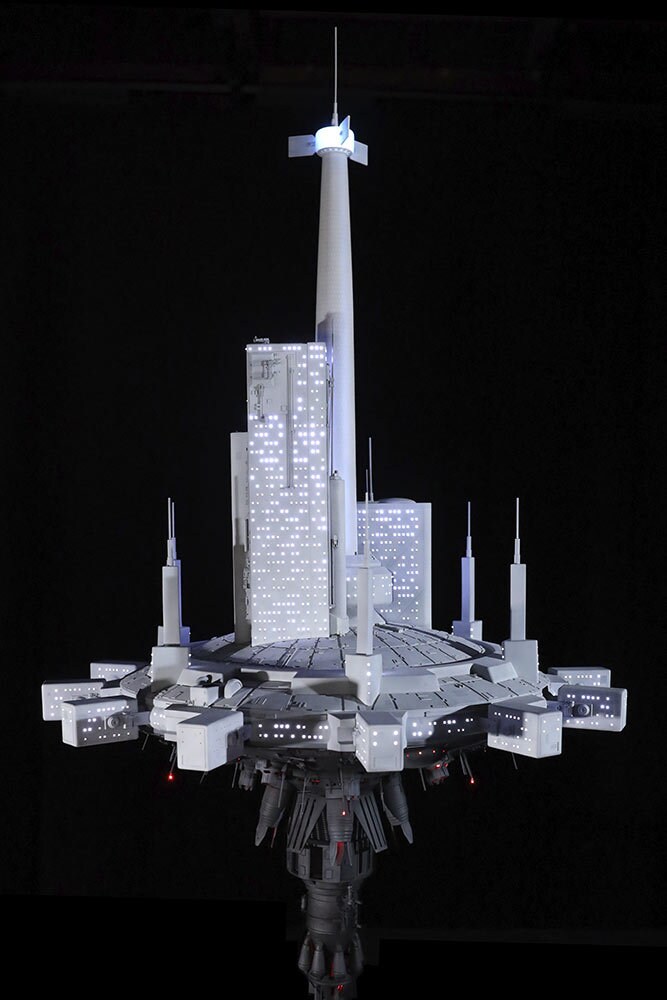 And there’s one more Easter egg: Eaton’s initials are on the model…somewhere.

Paint was an entirely different challenge. As the High Republic era is something of a gilded age, it’s not the grimy, beat-up Star Wars of the original trilogy. Rust was specifically vetoed by the Story Group.

The Starlight Beacon is divided into two hemispheres, with the top featuring towers and residences, while the bottom is more industrial. Eaton painted the bottom portion as he would any Star Wars model, he says, but the upper portion required some more conversations with the Story Group. “I had questions about the top, because they were like, ‘It has to be white.’ I said, ‘Look, if this is painted white it could look like a toy. I know you have an idea for this, but it just needs to have a little grime in the panel lines or whatever.’ They were very cool and said, ‘Alright, we trust you on that. Do what you think will work and let us see it.’ When I showed them, they said, ‘Yeah, that’s light enough.’ So that was a Phew! moment.” Still, there were more color issues to solve. 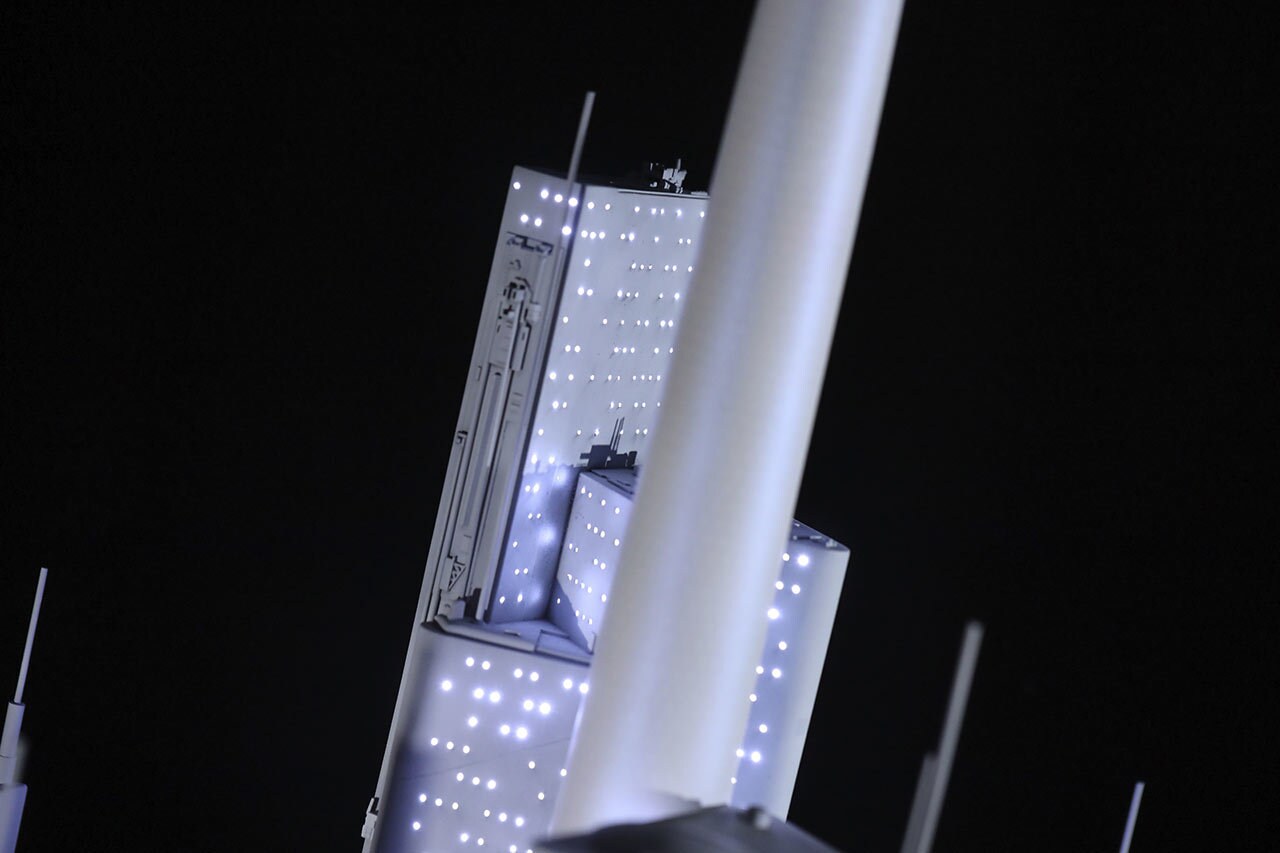 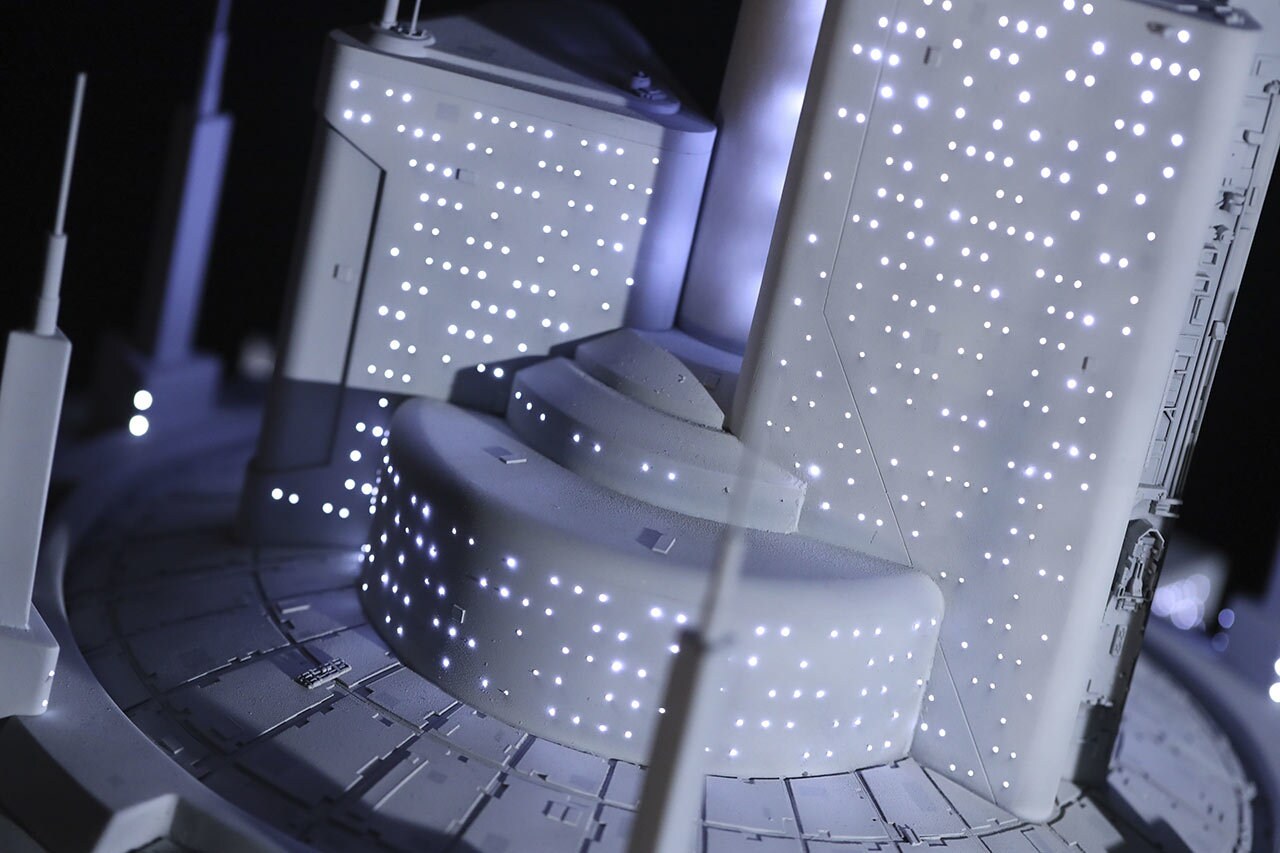 “The center spire was another thing,” Eaton explains. “They said it’s ‘made out of some exotic material that almost has a glow, but we don’t want it to light up.’” This presented an unexpected opportunity. Eaton had joked with his wife about wanting to use iridescent paint somewhere as something of a model making in-joke, as it’s near impossible to match for hobbyists. This seemed like the perfect chance to pull off the subtle prank. “I said to the Story Group, ‘I could paint it iridescent,’ and they all lit up a little bit. I was like, ‘Yeah, so when the light hits it, it’s going to shimmer and have a blue-ish, weird tint to it. They were like, ‘Oh, can you do that?’ That solved a problem they had. And it made me laugh.” (Pro-tip: Eaton says he used iridescent powder from Michael’s.) Eaton also had to match his model’s lights to the rpm of an animation seen in the High Republic Show intro, calling in a friend particularly good at programming to solve the frequency. “It’s a whole ring of LEDs, and they sort of fade out and follow each other, so it’s a very organic, sweeping motion.”

With paint and lighting complete, the Starlight Beacon was ready to join the Star Wars galaxy. 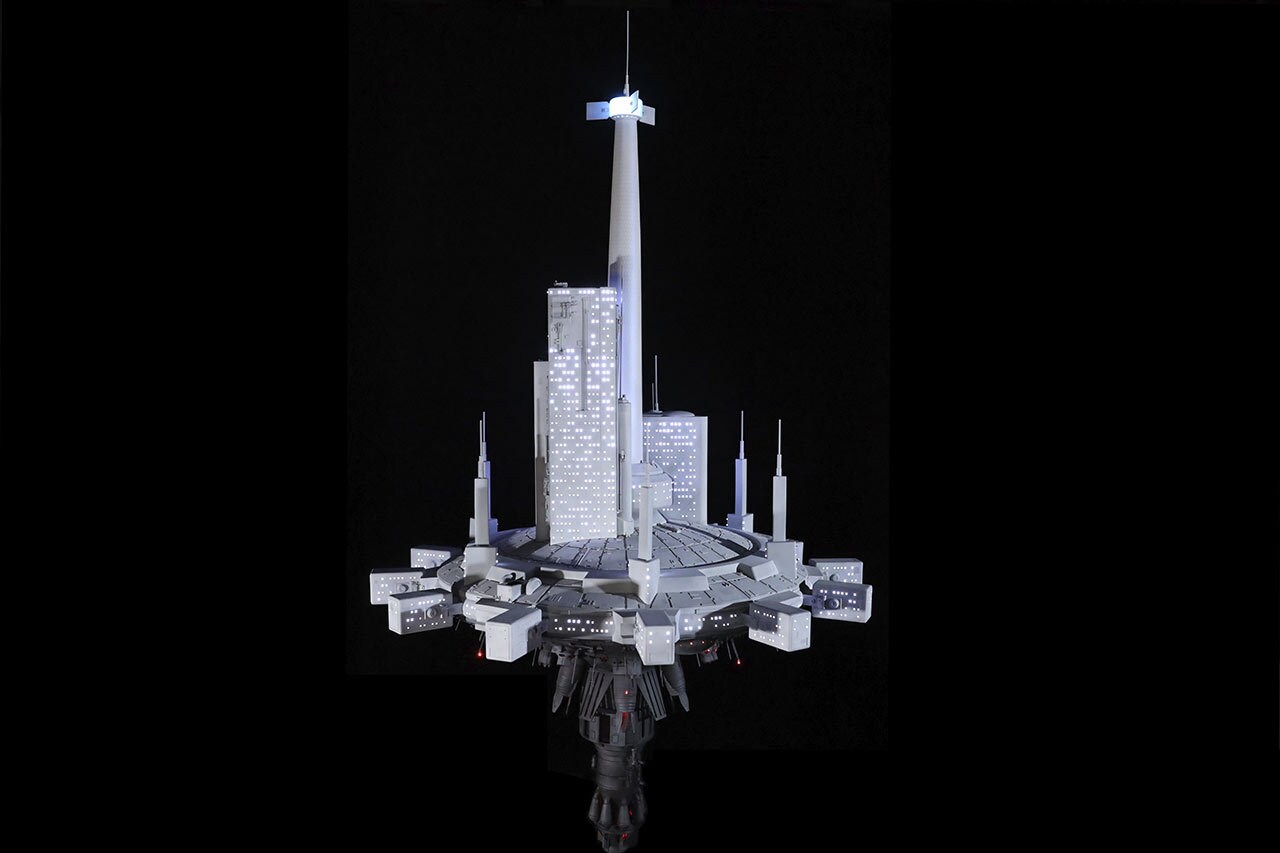 All told, it took about four months for Eaton to build the Starlight Beacon, putting in at least four hours a day, every day. It sounds like time well spent for the boy who dreamed of making Star Wars models, though it has led to one new wish.

“I’m just over the moon that I was asked to do it in the first place,” Eaton says. “Here’s hoping Dave Filoni or Jon Favreau see it someday and say, ‘Throw that in The Mandalorian!’ A guy can dream, right?”

See the Starlight Beacon and more on Star Wars: The High Republic Show below!