Jason Fry on Exploring Rodian Culture and Treacherous Wookiees in Star Wars: Aliens of the Galaxy

The author discusses his new guide to Star Wars' alien species, from Abednedos to Sullustans to Weequays.

Star Wars is full of interesting alien species, from diminutive Jawas to hulking Dowutins, and now there’s a new guide book to the galaxy’s lifeforms to help younglings know their Abednedos from their Weequays. Out for sale this week, Star Wars: Aliens of the Galaxy is a treasure trove of information written by Jason Fry and published by Studio Fun International. No stranger to writing both reference books and fiction in the galaxy far, far away, Jason Fry shared with StarWars.com via e-mail his experience in writing this pictorial guide about such aliens as Kel Dors, Sullustans, and Dybrinthe. 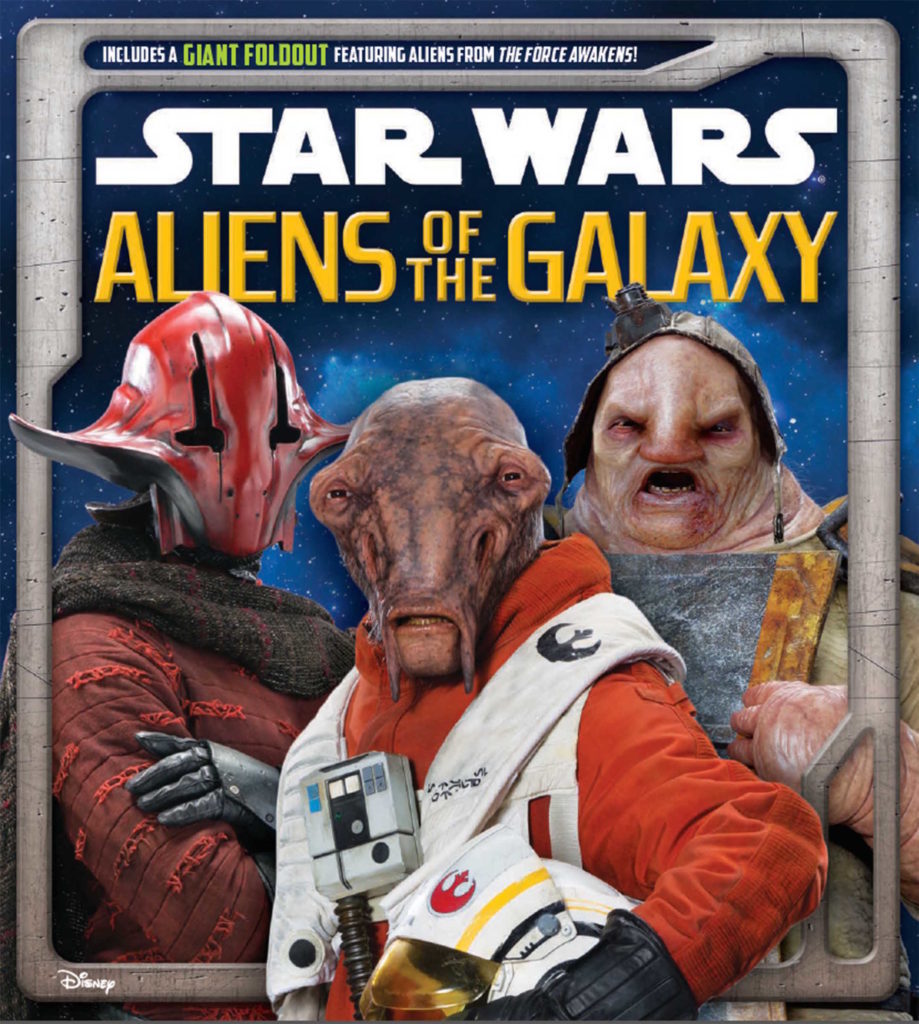 StarWars.com: Aliens of the Galaxy covers almost 40 different sentient species from the Star Wars films, as well as from The Clone Wars and Star Wars Rebels television shows. How were species selected for inclusion in the book?

Jason Fry: Obviously, we wanted to highlight the interesting new species from The Force Awakens -- I love new planets, species, and ships because they make the galaxy feel bigger, as it should feel. From there, we of course wanted to include Star Wars’ “greatest hits,” if you will -- you’re not going to have a book about Star Wars aliens without Wookiees, Hutts, Ewoks, Neimoidians, and Gungans, right?

What was fun for me was seeing those new and old aliens side by side. That made it feel like Mon Calamari and Ithorians and Crolutes and Lasat had always been shoulder to shoulder in cantinas and spaceports, but you’d just missed spotting the new guys before. 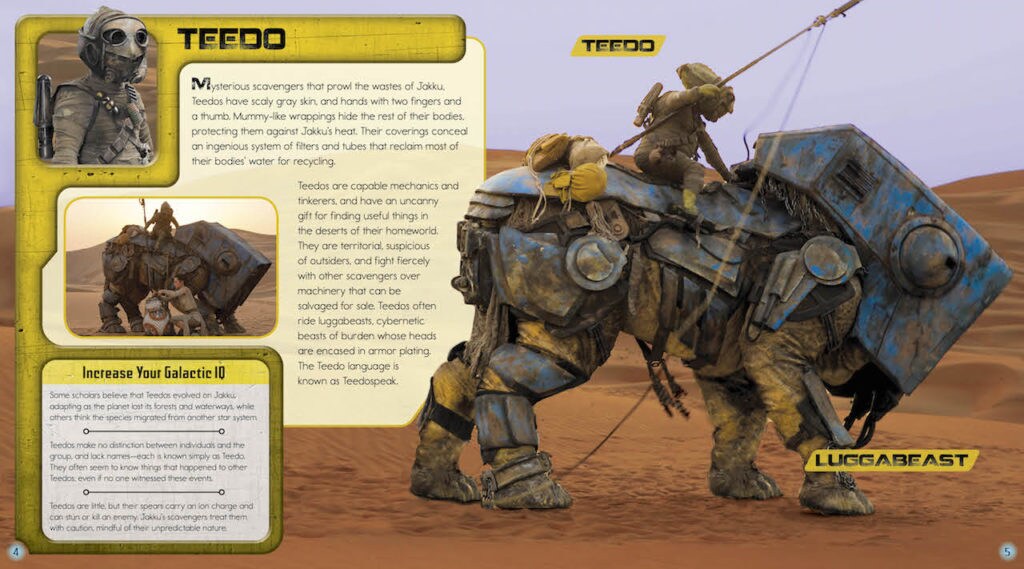 StarWars.com: A main focus of the book is alien species seen in The Force Awakens. How much information were you usually given about an alien and how much were you allowed to develop that species’ biology, evolution, history, and culture?

Jason Fry: My starting point was The Force Awakens Visual Dictionary, but I had a lot of freedom beyond that. The biggest challenge was making sure that any new information fit with what was being developed for other sources, most notably Landry Walker’s great anthology about The Force Awakens characters, Tales from a Galaxy Far, Far Away -- Aliens Volume 1.

Happily, the folks at Lucasfilm and Disney were there to make sure I didn’t step on Landry’s toes or anyone else’s. We did have one near-miss -- my take on the Crolutes wound up on the cutting-room floor because Landry got there first. Oh, well! Fair’s fair!

StarWars.com: At the end of the book, there’s a cool way to provide information on several aliens seen in Maz Kanata’s castle or on Jakku. Can you tell us more about this?

Jason Fry: I saw the hex foldout in Ships of the Galaxy, an earlier Studio Fun title, and was really glad we were able to borrow that treatment for a book about aliens. It’s pretty cool and I hope adds a sense of play and discovery to the book.

StarWars.com: With many species only represented by one or two characters in the saga, how did you go about defining the entire histories and cultures for those species? Were the characters typically representative of their species, or exceptions to their kind?

Jason Fry: I don’t like to generalize and tried to be careful not to. I’m indebted to Dave Filoni for that. In The Clone Wars, Filoni made a point of stepping away from some of the more Flash Gordon-style species characterizations of earlier Star Wars material -- Rodians being big-game hunters and bounty hunters, for instance -- and I thought that made the Star Wars galaxy a lot richer. There’s no single template for human characters, so why should there be one for other species?

Of course, if you take that too far the narrative gets so diffuse that it won’t connect with the reader. So I tried to address historical, geographical, or biological factors that had shaped a species, while making clear that there’d be a ton of variation among individuals. There are noble Dugs, treacherous Wookiees, and Ithorians who toss their empty soda cans into the woods. Words like “some,” “most,” and “many” are your friends there.

StarWars.com: When describing new alien species, how do you balance exploring new forms of life and making sure they still fit that sense of being Star Wars?

Jason Fry: I suppose you let the species suggest its story, and then run with ideas that the existing storytelling might suggest. For instance, the Melittos were clearly an insect species, and I’d already established some things about them in The Weapon of a Jedi -- the cilia and the idea that Sarco was an outcast. So those were my starting points.

As for the Star Wars part, callouts to a broader context help. So the Narquois are connected to existing lore about the Neimoidians, and the Artiodacs are from the Morellian Commonwealth, an established region. Hopefully the effect is to make it feel like the species fits into the galaxy and has "always" been there. 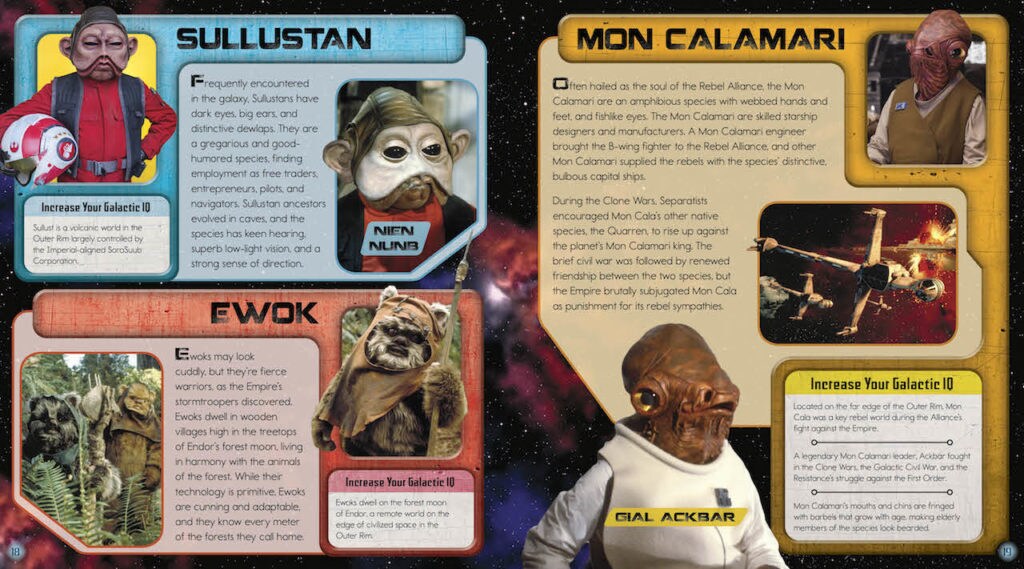 StarWars.com: In a guidebook like this one, pictures are key to helping readers identify with the species. Can you describe the process of selecting images to represent that alien species?

Jason Fry: I left that to the talented folks at Studio Fun. One thing we decided early was that it was fine to have movie photos next to The Clone Wars and Rebels-style animation images. Fans watch those differently presented stories in rapid succession and love them all, so why worry about different art styles? It’s all Star Wars!

StarWars.com: For a book aimed at children, you still use quite the vocabulary, bringing in words like “cilia,” “janissaries,” and “pidgin.” How is it balancing the need to be accessible to younger readers with the desire to bring greater knowledge to the audience?

Jason Fry: I try to make sure the context helps readers -- of whatever age. Beyond that, though, it’s never been easier to look up a word -- you can Google it or ask your phone. When I was a kid I loved discovering rich new words and I hope there are few in Aliens of the Galaxy that younger readers will zero in on and make their own.

StarWars.com: In addition to the main text for each entry, you also often include an “Increase your Galactic IQ” sidebar. How did you decide what type of information would go into these?

Jason Fry: There wasn’t any hard and fast rule -- it was more giving readers some Star Wars dim sum, if you will. Ideally you get a little bit about the species, its history, and an individual or two. Add those things up and hopefully it made each species feel like it had a rich history behind it, with the selected lore just hinting at other stories to be told.

StarWars.com: In the past, Yoda’s species has always been left as a mystery. In developing Aliens of the Galaxy, were there any other mysteries you had to work around?

Jason Fry: Maz’s species was on our initial list but I knew that wasn’t going to fly. Which was fine! As fans we think we want to know EVERYTHING RIGHT NOW, but if that ever actually happened, we’d be miserable. There’ll be time to explore all that.

StarWars.com: What was one of your favorite entries to develop?

Jason Fry: I loved developing the Melitto -- Sarco Plank’s species. I inherited the name from another project -- the Visual Dictionary, if memory serves -- but then ran with the idea from there. As the writer who brought Sarco to life in The Weapon of a Jedi, it was a lot of fun to come back to him and tell some more of his story. 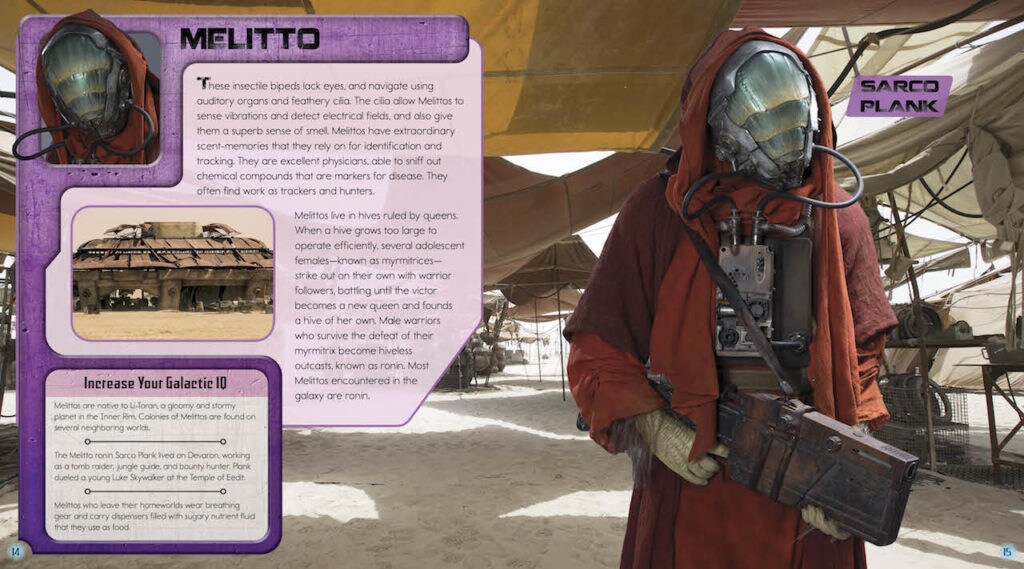 StarWars.com: In a galaxy with so many different aliens, was it a challenge to limit the number of entries for this book? Are there any aliens that you wish you had the space to include?

Jason Fry: Oh, too many to name. But that’s part of what makes Star Wars so much fun -- there are hundreds of aliens you’d love to write about and thousands of planets that would be fun to explore.

Jason Fry: You start by figuring out what each project needs and getting as close to that as you can. I give myself checkpoints by asking what I’d want as a reader/fan, which I so often am. What information would I want? How would I want it presented? Which in this case meant asking which were the coolest new aliens and my favorites among the “old friends” and then thinking about what stories could be told about them in the space we had.