Celebrate the women of the galaxy -- including Leia, Rey, Padmé, and Ahsoka -- with a new collection of jackets, shirts, and dresses (with pockets!)

Nearly a decade ago, when Her Universe was just getting ready to launch its unique Star Wars apparel for female fans, founder Ashley Eckstein was trying on different names that exemplified the brand and the community she was hoping to build.

She landed on "Sisters of the Force," a phrase that was ultimately left on the cutting room floor. But for Eckstein, the voice of Ahsoka Tano on Star Wars: The Clone Wars and later Star Wars Rebels, it helped to set the tone for things to come. "Sisters of the Force never took off, but it was always kind of my name for the female Star Wars community," she says. And next week, Her Universe will launch a special "Sisters of the Force" capsule collection at Star Wars Celebration Chicago, with dresses, shirts, hoodies, and even capes that pay homage to some of the bravest women in the galaxy.

As the company prepares to celebrate its ninth anniversary, Eckstein shares the stories behind the designs in the new line. 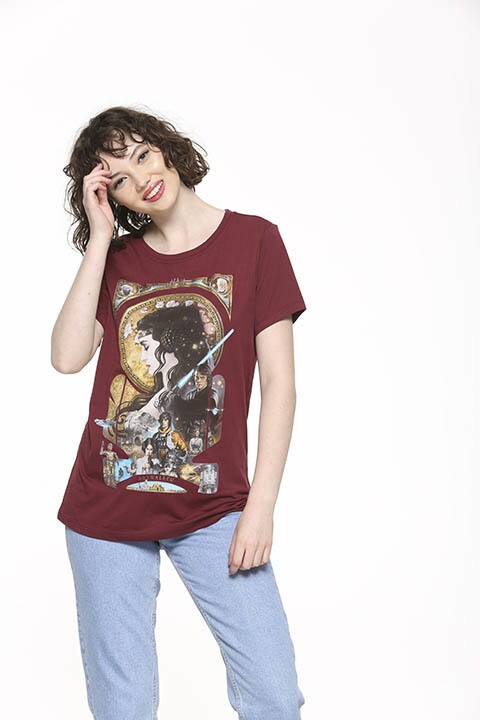 If this nouveau design looks familiar, that's because the piece was pulled from the Her Universe vault to be reissued by request. “It was our most popular shirt when we first launched," Eckstein says. "That shirt hasn’t been available for over 5 years. But people still request it because their first shirt is worn out or they’re a newer Her Universe fan." 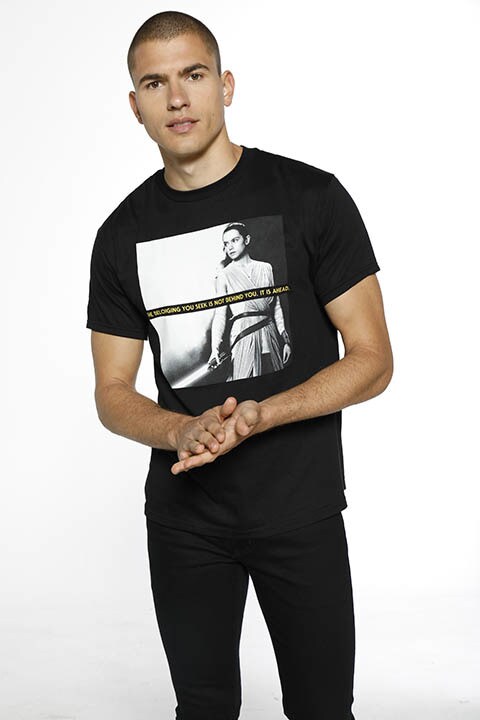 Star Wars fandom is like a family, and there's no place that's more apparent than at Star Wars Celebration. With the launch of Our Universe last year, Eckstein's team opened up even more possibilities with unisex offerings. "So many guys not only have supported us from day one but on a regular basis they tell me we're one of the only brands that offer Ahsoka Tano T-shirts for men," Eckstein says. When it came time to design a piece for Rey, the team chose a unisex cut and a quote that was indicative of inclusion. “That quote felt like it was right for Rey, right for the saga where we are now going into Episode IX, and just right as an inspiring quote in everyday life.”

This subtle yet striking black-on-black tee has a secret - on the back is printed an adage from an episode of Star Wars: The Clone Wars, “The Wrong Jedi.”

The quote -- “Never give up hope, no matter how dark things seem.” -- is one of Eckstein's personal favorites and a reminder to have faith even in darkness. “To me, Star Wars means hope. That is what it has meant to me personally for years as a Star Wars fan. And Ahsoka is a survivor. Ahsoka lives and Ashoka means hope to me.”

“I’ve been wanting to do Padmé’s lake house dress for years," says Eckstein. "It’s a very difficult dress to make, and to make a ready-to-wear version that anyone can wear."

But the flowy chiffon number, with a bustle and delicate finger loops, still felt too fancy for some fans, who asked for an everyday version. That's when the team designed a hoodie in matching pastel hues. Ultimately, rather than choosing between the two, Eckstein decided to produce both. “Padmé doesn't get enough love." 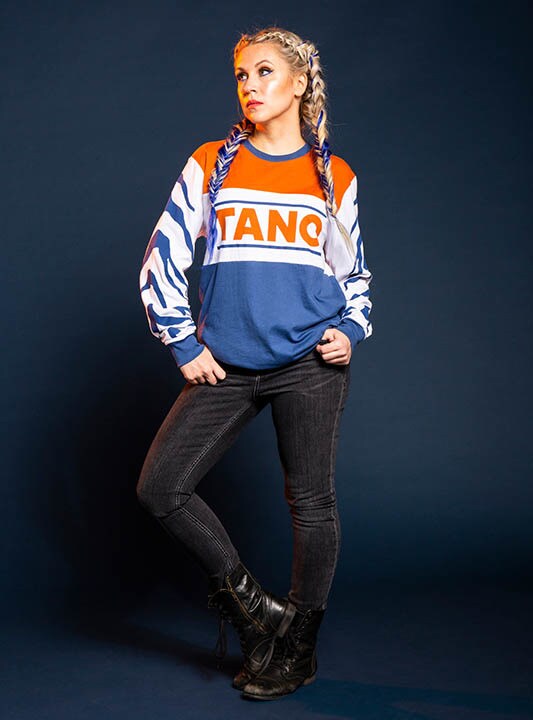 Lucasfilm's Daniel Kennedy designed this number, a unisex pullover that incorporates Ahsoka's lekku markings and other identifying features in the design. 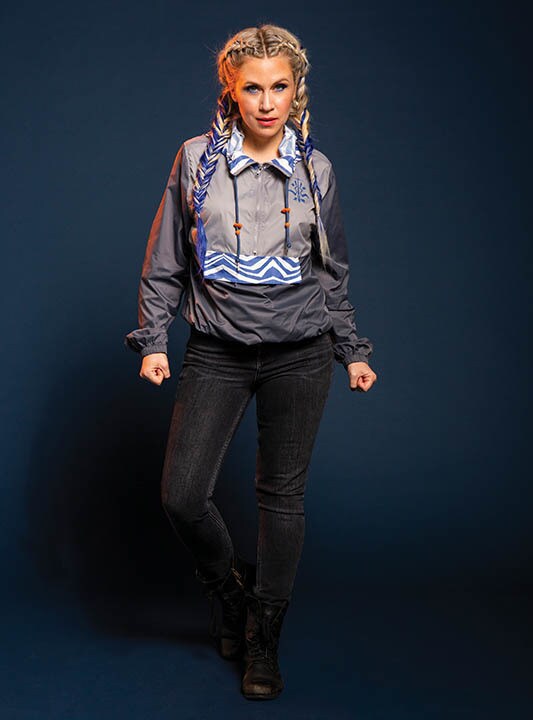 Also designed with lekku in mind, the hood on this windbreaker includes two points. “Not only is it a nod to Ahsoka but also kind of a nod to cosplayers," Eckstein says. 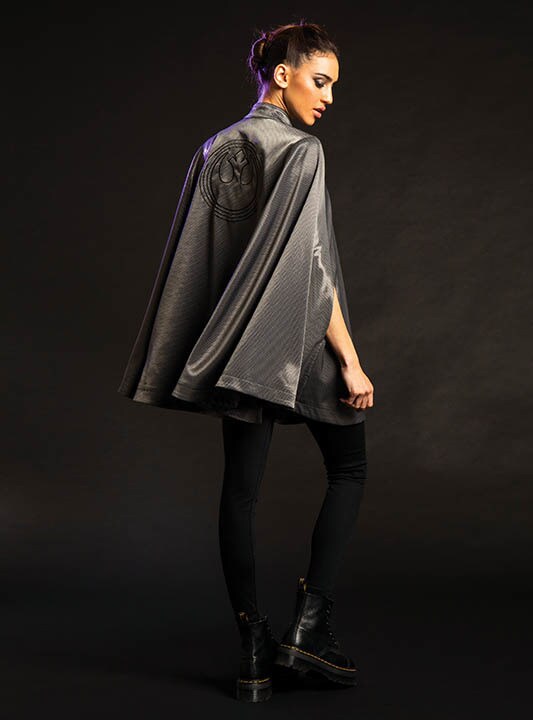 Even though Her Universe doesn't create screen-accurate replicas, a lot of research went into creating this textured jacquard cape coat with the formidable Leia Organa in mind. "We tried to pick something that closely emulated General Organa’s cape coat," Eckstein says, then took some liberties adding a rebel symbol to the back and a metal nameplate on the front. 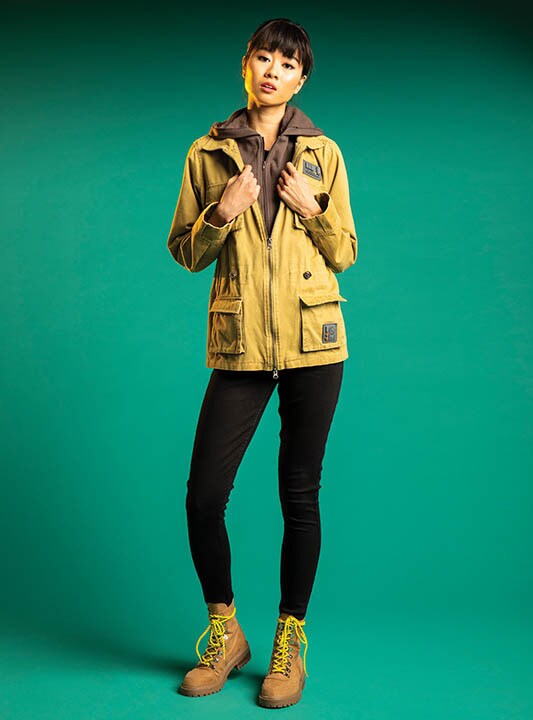 This rugged jacket takes a lot of cues from Rose's jumpsuit, and even sports details like a cozy fleece hood and an embroidered patch to match her necklace. 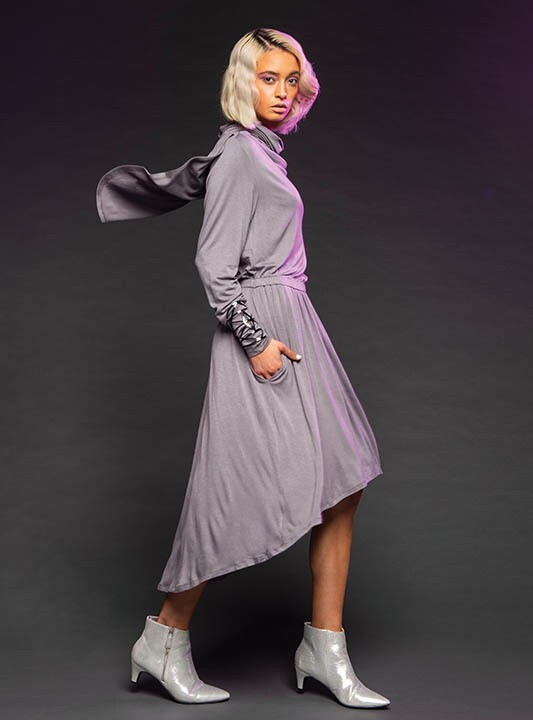 “We wanted to do that dress so bad from the second we saw it," Eckstein says of Admiral Holdo's draped lavender frock. "But honestly, when we designed our The Last Jedi collection, there was a lot we didn’t know. After the film, when we realized she’s awesome and the dress is awesome, we knew we had to make it!"

A looser fit and shorter cut make this dress more versatile for everyday wear. Plus, it has pockets! “Pockets are the rule, not the exception," Eckstein says. "We have a general life rule that you should put pockets in as many things as possible. There are some designs where pockets, for the fit, it’s not possible. So that’s the exception. But the rule is if it’s possible to put pockets in a design, there will be.” 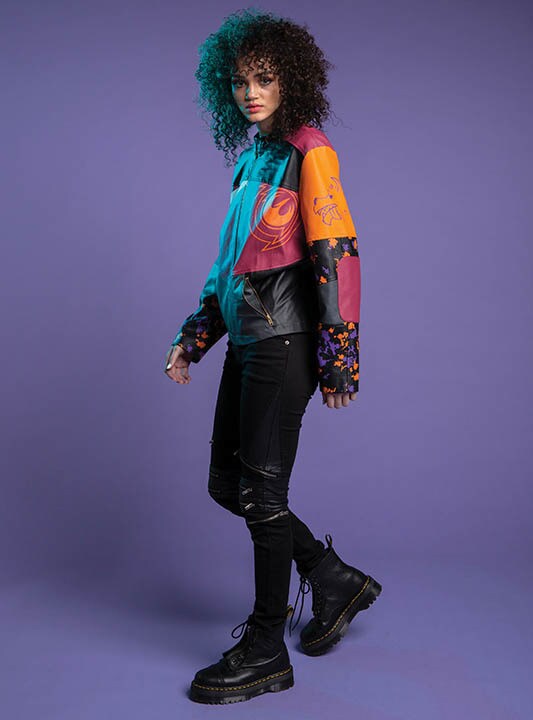 Inspired by Sabine’s first-season armor because "for most fans that’s the most recognizable," Eckstein says, this jacket includes nods to the Mandalorian artist's handiwork as well as a back panel "inspired by the front of her helmet." 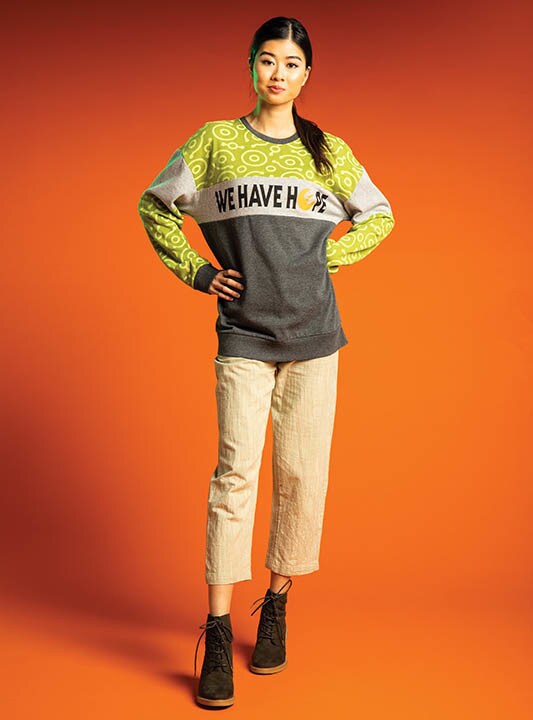 For this design, Eckstein asked Vanessa Marshall, the voice of Hera, to weigh in, picking her personal favorite quote from the character, "We have hope."

"If you’re not a fan, I think it just looks like a cool design," Eckstein says. But if you are, you'll know you're wearing a piece that came "straight from the voice of Hera." 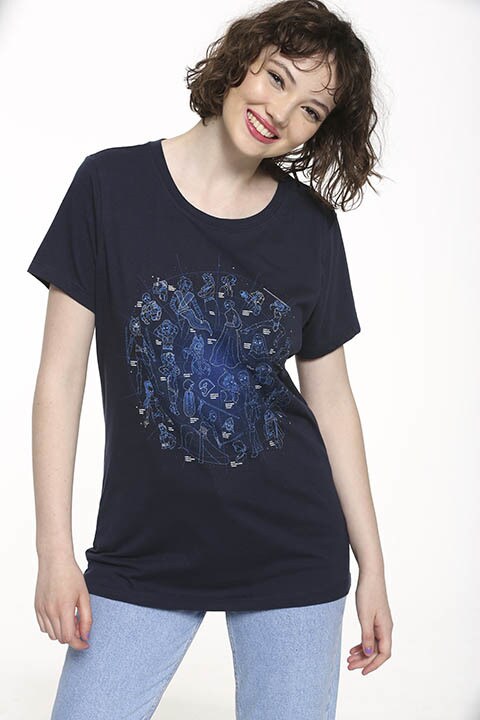 Even with all these pieces, there were still too many female Star Wars characters to represent them all in the capsule collection. “I called up my friend [and artist] Ashley Taylor and I gave her a list.”

This final design was inspired by a star map and has 27 characters, all celebrated as constellations in a vast expanse of galaxy, and emblazoned on a tee and a pullover.

You can purchase items from the Sisters of the Force collection at Star Wars Celebration Chicago and on HerUniverse.com beginning April 11.