Galaxy of Heroes: 5 Things You Should Know About the Flight of the Falcon Legendary Event

Take control of the Millennium Falcon in the hit mobile game.

If you're a Galaxy of Heroes player, you might be the next owner of an iconic hunk of junk.

The classic version of the Millennium Falcon has finally arrived in the popular mobile game, unlockable thanks to a new Legendary event called Flight of the Falcon. Just call upon your Bounty Hunter faction (and a little help from the Empire), defeat the Falcon in battle, and it's yours. (Sorry, Han.) StarWars.com caught up with several of the talents behind Galaxy of Heroes and discovered five things you should know about Flight of the Falcon, including why it took so long for the original trilogy version of the ship to get here, insights into bringing the bucket of bolts into the game, and some tips on winning the event.

1. The game designers have wanted the Falcon in Galaxy of Heroes just as badly as the fans have wanted to fly the fastest ship in the galaxy in-game. “This has been one of the most requested ships from our community since launch but we wanted to make sure we did her justice," says Chris Stott, senior community manager. "The most legendary ship in the Star Wars universe deserves something special, so we took our time exploring what parts of the Falcon's history really resonated with us and then, how those moments could translate into our game. It needed to not only feel great to play but also sound and look just right. We hope you'll find that the wait was worth it!” 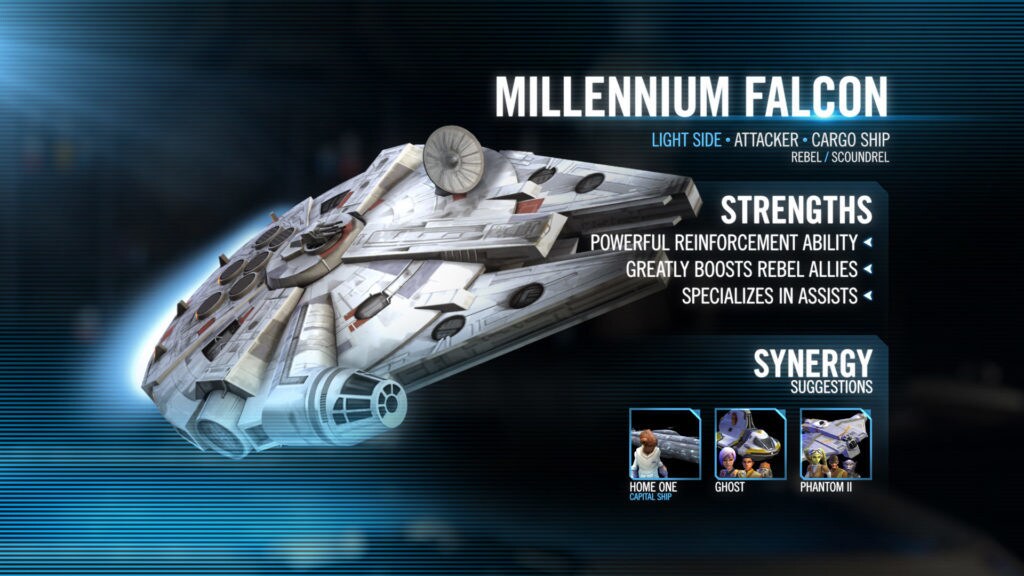 2. The ship that Rey once referred to as "garbage" is anything but in Galaxy of Heroes. The Falcon has several attributes and abilities that will take your fleet to the next level. "True to form, the Falcon boosts Rebel allies and brings the faction to center stage," says Corey Willis, associate game designer. "It cuts through the toughest defenses and creates openings with its basic attack, pulverizes the Empire with a devastating special attack, and evasively outmaneuvers the enemy team.”

3. In developing the Falcon, the Galaxy of Heroes team went back to the original source for inspiration. “We knew from the start that we absolutely had to fulfill the fantasy of the original Millennium Falcon to the best of our ability," says Chris Mandell, game designer. "So we started out re-watching all the movies and gathering every bit of information about it to make sure everything was spot on. You’ll notice that every ability takes inspiration directly from the films. I also spent some time talking to everyone in the studio about what they remembered most about the Falcon and tried to incorporate the most memorable moments. Aside from thematics, we also knew that while playing with it, it really needed to really feel like it was an essential part of a Rebel fleet. This was the most fun we've had making a Ship to date! We really feel like we captured the essence of the Falcon and we're excited and hopeful that our players will feel the same.”

4. You'll need to do some recon to be successful in Flight of the Falcon. In talking with StarWars.com, the creators of Galaxy of Heroes stress that research and planning is integral if you're going to win the event. "In addition to the Devastator, you’ll notice that the event features some (hopefully) familiar ships to provide Han’s Millennium Falcon with some backup," says Mike Profeta, game designer. "The Falcon will almost always have the Outmaneuver buff, which means it has increased Evasion and can’t be targeted if it has allies present, so you can pretty much count on not being able to defeat it right away. It’s going to be extremely beneficial to learn what each of the Falcon’s new allies can do and which ones to prioritize defeating first in order to gain the upper hand." And like the Tarkins and Ackbars of the galaxy, you'll want to strategize which craft to send into battle and when.

"You’ll need to pick your front line ships carefully and maximize the potential of their abilities," adds Willis. "For example, bringing IG-2000 in at the start to utilize its Stun can allow you to lock down the enemy’s most deadly Attackers, allowing you to focus on eliminating them first.”

5. If you've never played Galaxy of Heroes before but want to jump in, this is a good time to fire up your mobile device and shout "Punch it!" But before you can capture the Falcon, you'll need to beef up your squad. “If you are gunning for Han's Millennium Falcon as soon as possible, then I'd recommend focusing on Bounty Hunters and their ships, with an emphasis on the specific characters needed for the Flight of the Falcon event," Stott says. "Bounty Hunters are a great place to start if you are new to Galaxy of Heroes as they can be used in a variety of events and are just plain cool."

Even if you obtain the Falcon, however, you should heed Han's words: But who's gonna fly it, kid?

"The Bounty Hunter ships unlock Han's Millennium Falcon but you'll also need characters, like Boba Fett and Bossk, to unlock one of the pilots, Chewbacca," adds Stott. "Level up those scoundrels and keep your eye out for the Legendary "One Famous Wookiee" event. The other pilot of this iconic ship is, of course, Han Solo. You'll need to join a Guild to start earning shards of Han Solo from the Guild Raid, The Pit. It can be quite a journey to unlocking Han's Millennium Falcon, but one well worth the effort!”