Fans reflect on their first steps into a larger world.

Star Wars Celebration Anaheim is less than three months away. Yub nub! It's close enough that I'm starting to note specific events on my calendar, and I can hardly contain my excitement. Panels, live podcasts, displays, dioramas, parties -- Celebration is four days of memorable experiences. Besides seeing the numerous sights, you'll have the opportunity to meet your favorite Star Wars actors and authors and connect with other fans. I'm not exaggerating when I say there's never a dull moment.

No matter how many Celebrations you attend, there's nothing like your first. Whether it was the inaugural Celebration in Denver, Colorado, in 1999 or the more recent Celebration Europe II, your initial experiences stick with you. I recruited a handful of fans to share their favorite memory about their first Celebrations and received stories about love, friendship, and droid building. 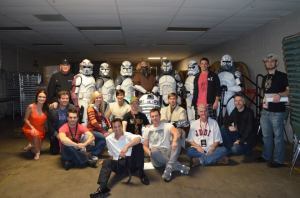 Celebration VI in Orlando, Florida, was Savanna Kiefer 's first, and she had quite the experience:

"During the convention, the Florida Garrison of the 501st Legion asked me to join them in inducting David Collins as an honorary member. This was a very special moment for me because I got to meet many of the voice actors and on-screen actors from Star Wars. They all posed for a group picture with us which was incredible! After the induction, Dave Filoni gave me a hug and one of his 'Plo Kool' buttons. I carry that pin with me all the time to remind me of the great memories I made at CVI."

Celebration VI was Brian Larsen's first too, and we'd say it ended pretty well for him:

"I'll be honest, I only distinctly remember bits and pieces of the various panels and shows from Celebration VI. What I remember most was being able to spend time in person with friends that I had met through various Star Wars message boards, sites, and Twitter lists. One such friend was my Tosche Station blog and podcast partner Nanci. Not only did I get to hang out with her at Celebration, we started dating that weekend. About a year and a half later, we got married."

"The memory I have of my first Celebration is the feeling it gave me to be somewhere surrounded by thousands of people who all shared the same love for Star Wars as me. It was the first time I felt something like this, and it was almost like a homecoming. Being at Celebration gave me a sense of belonging and allowed me to express my inner nerd with everyone around me. The excitement in the air was palpable the entire weekend."

I know exactly how you feel, Dalton. It's like receiving a weekend-long hug from fandom. 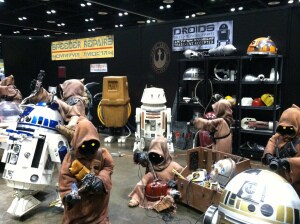 Darren Lindsay discovered a passion for astromechs at Celebration III in Indianapolis, Indiana:

"Over and over I kept finding myself returning to the astromech builder's room while wandering the halls of Celebration III in 2005. I had no idea that fans had been building R2-D2 and other droids from the Star Wars films. It was the smallest room at that Celebration, but for me it held the largest fascination. Several years later I took the plunge myself, joined their ranks, and now I'll have my own Artoo at Celebration Anaheim."

Yes, he found the droid he was looking for. We can't wait to see your Artoo in Anaheim, Darren!

Paul DePaola had a rebellious experience at Celebration IV in Los Angeles, California:

"Celebration IV was my first Celebration. After looking at the guest list, a friend asked if we could get a signature from Barrie Holland [Lieutenant Renz in Return of the Jedi] on his 'U RBL SCM' license plate. We took it to get signed, not expecting much. Barrie lit up after seeing the plate, even taking it behind the curtain to show the other 'Imperials.' We heard him say, 'Look they got mine on a license plate!' A small moment but has remained not only one of my favorite Celebration memories, but also one of my favorite Star Wars celebrity interactions."

Please scroll to the comments and share memories about the first Celebration you attended!