StarWars.com spoke to Star Wars: The Last Jedi creature concept designer Jake Lunt Davies for a special three-part series. Each installment focuses on one new element from the film that the artist designed, complete with Lunt Davies’ concept art, which can also be found in The Art of Star Wars: The Last Jedi. (In case you missed them, be sure to check out part one, on porgs, and part two, on the Caretakers.) In this final feature, we discuss BB-9E — the slick First Order astromech ball-droid or, for all intents and purposes, a BB-8 for the bad guys. 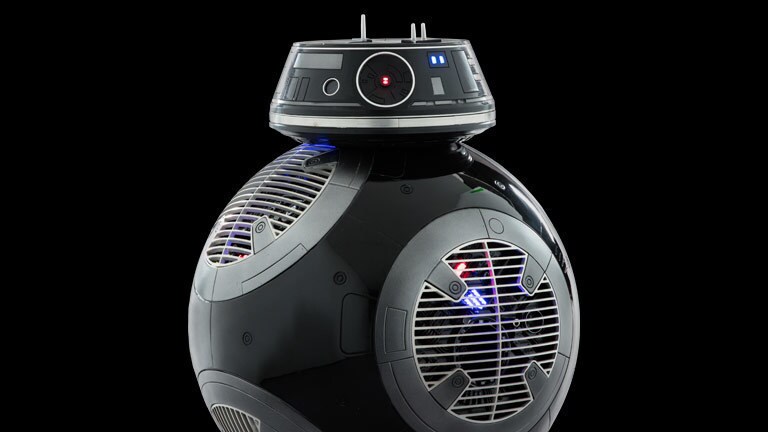 StarWars.com: BB-9E is interesting to me, because you have the established BB-8 design, and it's kind of like, how far can you push it to, basically, make your evil version? So how did you approach that from the beginning?

Jake Lunt Davies: This is not wholly my design, but a combination of some of my design and Luke Fisher’s, who did K-2SO. Both Luke and I were drawing ideas for BB-9E, the evil [First Order] droid. I think we both went, “It's got to be black, hasn't it?” [Laughs] So both of our droids were pretty black. Mine were much more shiny and had this gloss, which carried over to the final design.

Jake Lunt Davies: Yeah. Luke's were a little bit more matte and had a slightly more, Apple-esque feel to them. They were very clean, with sharp lines and a lot more of a Mac feel. What Luke had got in his one, too, was the head. We both agreed that the dome-shape of BB-8’s head is actually quite cute. It's warm. It's a nice round shape. And if you add hard edges to it, it becomes a cone, which is the head Luke drew.

Rian sort of picked up on my designs. I’d done a body. Various designs, but the one he picked up on had the grille, and it had a round head with a grille. Rian, I think, said, “I like that head [Luke’s design] and I like that body.” Because I'd previously worked on BB-8 on The Force Awakens and had worked with Josh [Lee] and Matt [Denton], who actually physically made BB-8, it kind of fell to me to progress with the design and move it forward, leading the art direction. We had to get the new head to fit on the same mechanics and, likewise, all the panels to work with the same mechanics. And what else is there to say on it, really? It was a combination of Luke's head and my body. [Laughs] 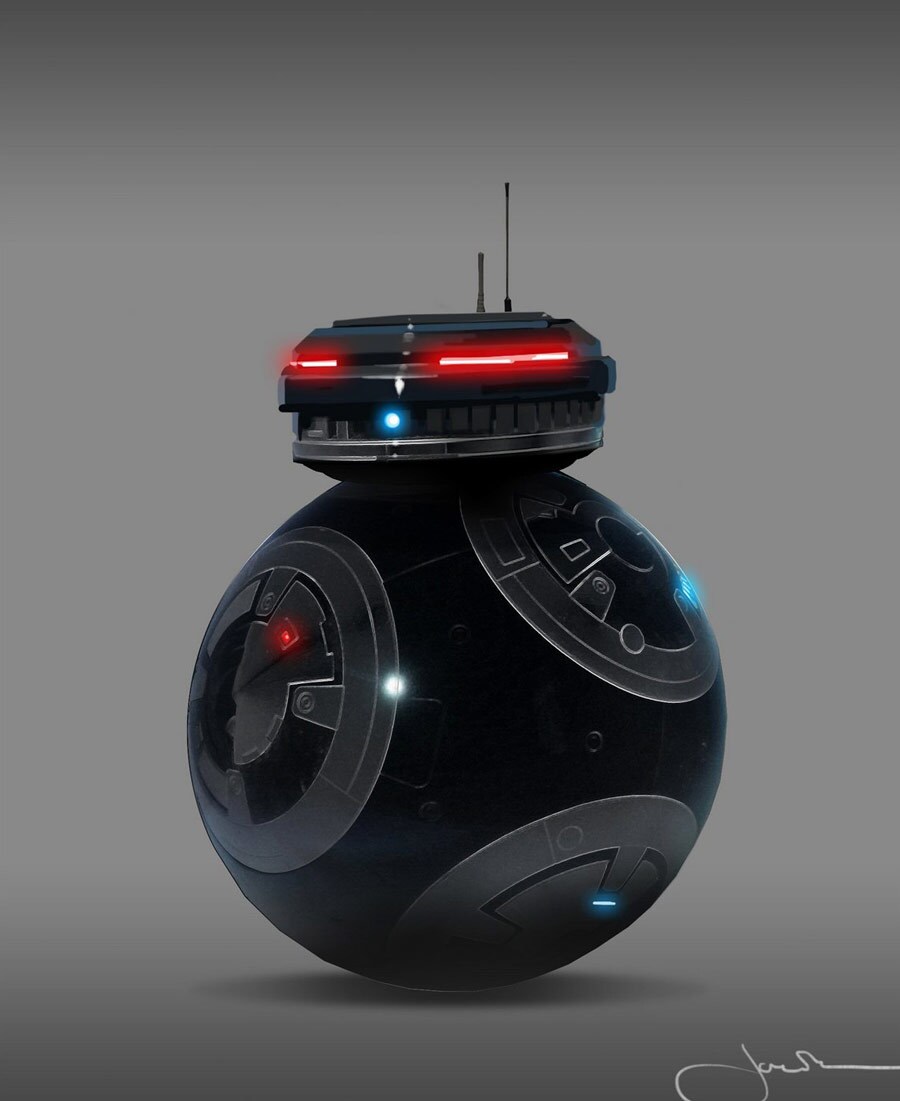 StarWars.com: There you go! I wanted to ask where the grilles came from. They read as threatening.

Jake Lunt Davies: Yeah. I suppose the uniformity of each panel is quite nice, having those sort of in contrast to BB-8. The uniformity of the grille design, I think helps. The grilles, yeah, they have a menacing thing. The initial influence was from 1930s vehicle designs -- the Chrysler Airflow and the Peugeot 202 -- but I think it led on to a feeling of prison bars or the menacing faceless grille of a Kendo mask. These are things, which I suppose you look at and think, “Oh, intimidating.” The head that I did originally had a grille which went on the top and around the back. So the sides weren’t grille, but the grille went from his chin over the top of his head and around the back of his head. The eye was set behind the grille, so you could just about see it, and that was his face -- - very influenced by the hidden headlights of the aforesaid Peugeot 202. That would have been how I originally did it and that was part of it but, quite rightly, we dropped the round head in favor of the cone head, which works far better. 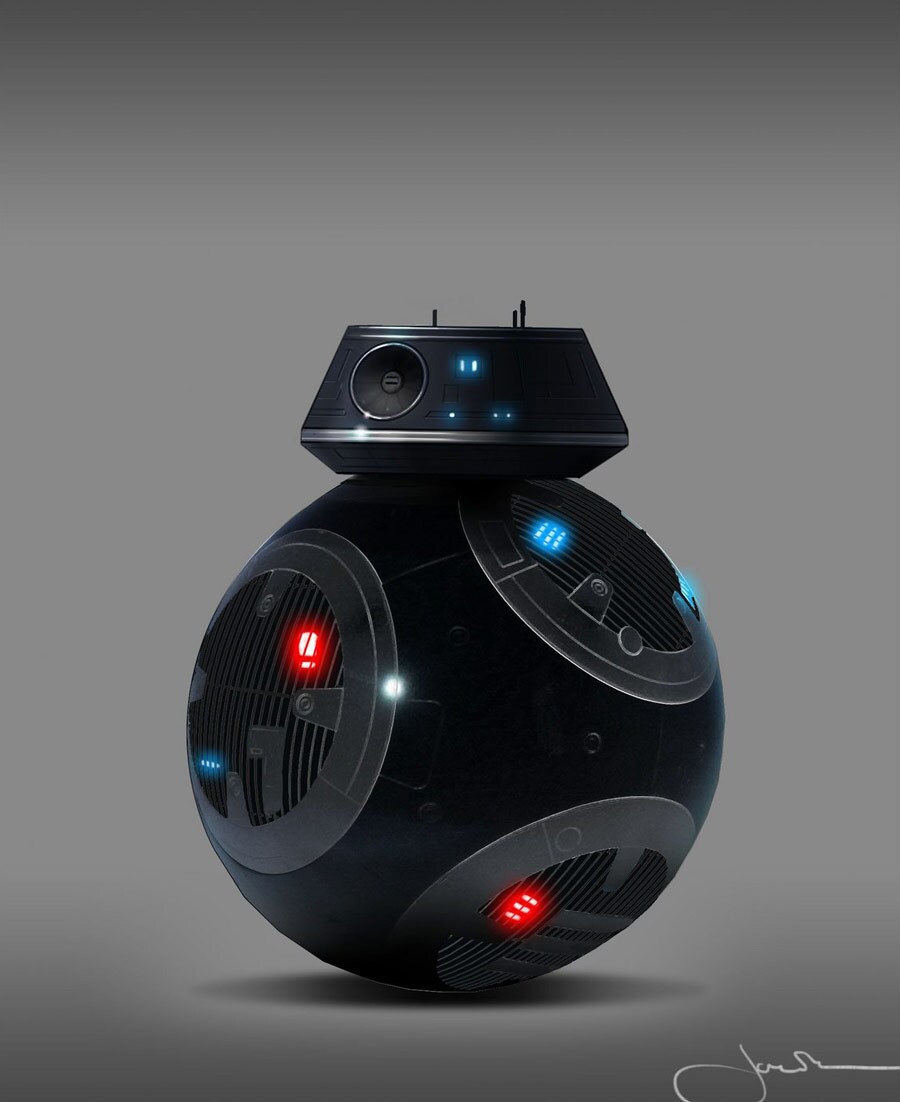 StarWars.com: And in terms of dialing in the design, what was that process like? How do you know if it's too simple? If it's too busy? Because he does have a lot of detailing around his head and certain detailing on his body.

Jake Lunt Davies: He does. Do you want to know a little secret about the detailing on the side of his head?

Jake Lunt Davies: Luke had hinted at these little shut lines. It's a little pattern that you see in various different Imperial or Star Wars [designs]. They're just random shapes and they allude to a function. And I was just playing around with these lines, and if you turn his head upside down, it says my daughter's name on one side and it says Luke's son on the other side.

Jake Lunt Davies: It says “Eloïse” and “Isaac.” But it's very subtle, because you have to have it upside down and squint. [Laughs]

StarWars.com: I love it. I mean, it’s one of those cool little movie secrets you hear about.

Jake Lunt Davies: Yeah, I hope so. I hope it doesn't detract. Because you sort of think, "I should be precious. This is Star Wars…"

StarWars.com: No, it's nice to know that there's an artist behind it, you know?

Jake Lunt Davies: Yeah. Well, they are essentially random lines, so why not make them look less random. Anyway, that's where the details on the side of his head come from.

StarWars.com: Do you have a favorite design from The Last Jedi that you worked on?

Jake Lunt Davies: I'll tell you one thing, I love the porgs. If you're going to say, “What's your favorite thing,” I'm so, so pleased with the porgs. And I'm pleased with the Caretakers, because they're a whole race and they're individuals. I love everything we've just spoken about because they are really important in the film. They are designs that I hope are very successful in terms of adding something to the film. I'm really pleased with them.

There are other things, though. I like, for instance, one of the designs which was in the Vanity Fair spread, the Annie Leibovitz one. There's a character in there who you can't really see. He's very tall. He's like 8-foot-tall, this character, and he's got a face like a dog. Previously on Rogue One we had a performer called Derek Campbell, who's a double amputee. He's now doing film work and turning it 'round and using this disability as a positive thing. He's getting work using that. We fitted him with prosthetic legs, which were twice the length of his normal legs, and very, very thin, so we have this character which you couldn't build unless you used a double amputee, because from below his knee he has these incredibly thin shins. There's no way any other performer could pull it off because their feet would be in the way. So we have this amazing looking, 8-foot-tall alien with impossible legs, all entirely practical, walking around on set. I suppose I was really pleased to create something that could make use of Derek again. We're trying to break the human form. We’re pushing things up. He's 8-foot-tall. He's not just another 6-foot, 5-foot-tall alien. He's of a different scale. So, yeah, I think I was always quite pleased with managing to get Derek back in and onto his incredibly long prosthetic legs, which were brilliant.